To Lum Smith, it is a kind of sacred place. He made that point last week as he walked along Woodlawn Avenue in Buffalo, near the Masten Avenue intersection, even if nothing around him seemed unusual: A few old wooden houses with potted flowers on the porches, an open lot where another home once stood, the morning hum of a worker mowing a lawn at the Buffalo Academy for Visual and Performing Arts, just across the street ….

Where, as Sinatra sang, there used to be a ballpark.

Smith, 74, a retired principal in the Buffalo city schools, could suddenly see it all again. "Here!" he exclaimed.  He windmilled his arm and took a couple of steps into the lot, looked across a backyard with an ancient metal swing set, then reached toward the blue sky.

"When he hit it," he said, "it must have come down right around here."

He was speaking of Luke Easter's Flag Day home run 60 summers ago. Three times – twice in that magical summer of 1957, and once more in 1958 – the Buffalo Bisons legend put the ball over the scoreboard at the old Offermann Stadium, only a few years before the place was demolished.

Easter was the first man to do it. Those feats helped cement his lasting stature in Western New York folklore.

Yet for Smith, a historian with deep knowledge of the African-American experience in Buffalo, the meaning will always transcend baseball.

"You have to understand," he said quietly, "what Luke meant to us."

From Mike Harrington: Happy 100th to the great Luke Easter

The Flag Day blast was the rare feat that is beyond exaggeration. Easter got his whole 240-pound, 6-foot-4 body into a pitch, and he drove it over a corner of a scoreboard that stood 40-feet high at Offermann. 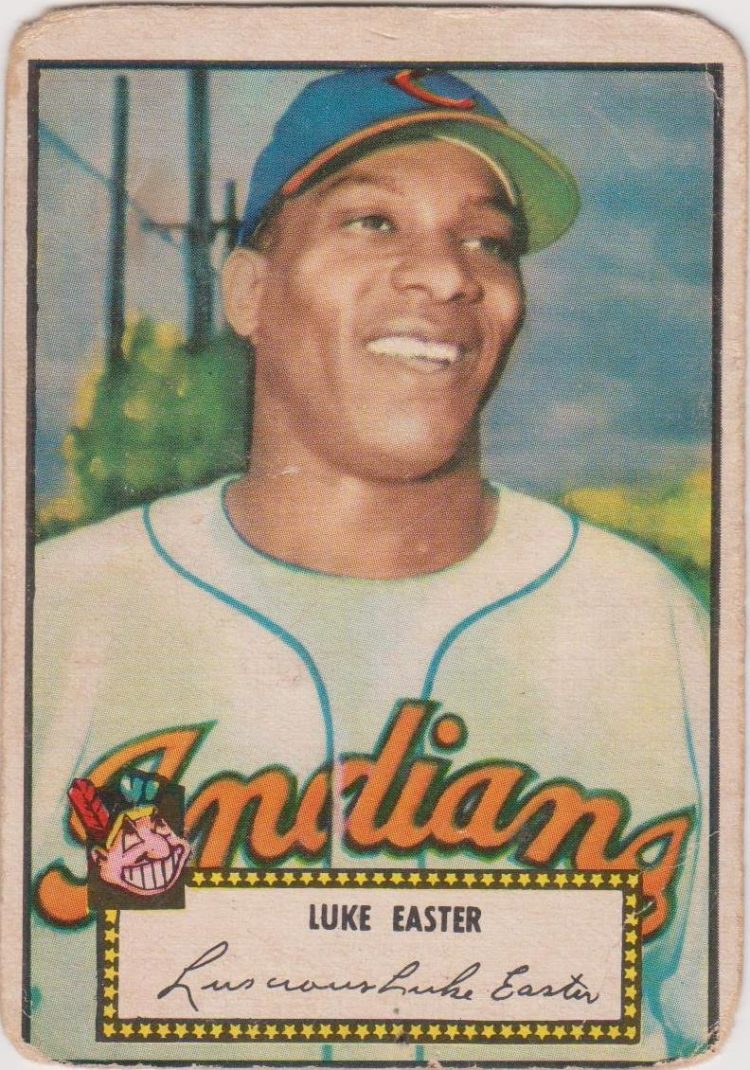 A 1952 Topps baseball card of Luke Easter, a Cleveland Indians first baseman who played for the Buffalo Bisons from 1956 to 1959.

Home runs are in the national spotlight this summer, with Aaron Judge of the New York Yankees blasting them in a way that generates sheer awe; one ball he hit during the home run derby in Miami is believed to have climbed 17 stories in the air.

In Buffalo, it is hard to contemplate those deeds without thinking about Easter. What makes him resonate is not simply what he accomplished as a player:

It is the way he inspired hope.

Easter, born in 1915 into Jim Crow conditions in Mississippi, joined the Bisons in 1956, making him the first African-American to play mainstream professional baseball here since Frank Grant in the 1880s. He was already in his 30s when Jackie Robinson broke baseball's color line in 1947, already past 40 during his great years at Offermann.

"He was loved by everyone," Smith said, yet he had particular meaning to Smith and other children of color. The ballpark was in a neighborhood rich with black heritage. Easter lived in the city, not far from Offermann. He'd often show up at the Michigan Avenue YMCA, a place Smith described as "a pillar for African-Americans in Buffalo."

Easter was bigger than life, a symbol of confidence and success in a community where opportunities were difficult to find.

"When he did good, we all did good," said Danny Williams, curator at the historic Colored Musicians Club of Buffalo, who was a child in the bleachers on the day Easter hit the Flag Day shot.

That home run, against the old Columbus Jets, remains vivid in the memory of those who saw it. Easter himself downplayed it, as he did many of his feats, claiming he'd hit a longer one in Buffalo that cleared two city rooftops. Joe Altobelli, who played first base for Columbus that day and went on to manage the Baltimore Orioles to a World Series championship, said he saw Easter hit equally majestic home runs when they were teammates in Rochester, years later.

If so, as Easter liked to put it, those balls must still be going. No one questioned that the Flag Day shot exceeded 500 feet. Some estimates put it at 550. It was a front page story in The News, and even Easter's contemporaries were awed.

Gail Henley, now 88, was playing center for the Columbus Jets that evening, in the second game of a doubleheader. He lives now in California. Reached by telephone, he recalled in detailed fashion how he reacted to the ball as it came off the bat.

He said Bob Kuzava, who died in May – a guy who twice recorded saves in World Series-clinching games for the Yankees – was pitching for the Jets. There were two men on base and 6,488 spectators in the house when Easter swung at the first pitch, a fastball.

"It's coming toward dead center field, I'm looking straight up, I'm going back as far as I can," Henley said. He had never seen a ball hit so high that stayed up so long; he believed he would catch it when it finally came down. 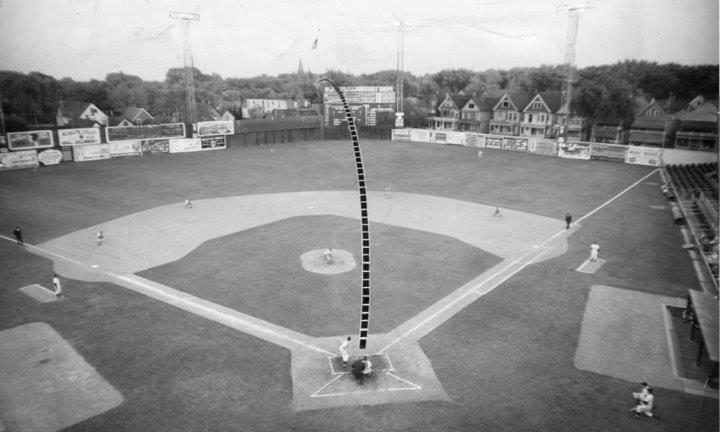 It never did. Henley went back to the fence and watched the ball vanish over the scoreboard, an instant of physical disbelief that remains distinct after 60 years. In the same way, the image of the disappearing ball stays with Fran Barry and Danny Williams, who were boys in the stands, next to their fathers, as they watched that ball climbing in the sky.

"Luke had power," said Williams, adding emphasis to that last word. "Hank Aaron would hit line drive home runs with those wrists. Luke would put his whole body out there. You went to see him do that. He hit that ball, and it just kept going up and up and up …."

And then disappeared. John Boutet, Bisons archivist and curator, said no one – not even Babe Ruth, who reportedly hit a long home run in an exhibition game – had ever cleared the scoreboard. Henley played with Willie Mays in the minors, when Mays hit .477 at Minneapolis. He spent more than 60 years in baseball as a player, manager and a scout.

He still believes Easter's shot in Buffalo was the longest home run he's ever seen.

There were two major newspapers in Buffalo, and each offered its own account of what happened to the ball. The Buffalo News reported that it flew out of the stadium and slammed into a house at 128 Woodlawn, owned by Irene Luedke. It made a sound, she said, like "an atomic bomb had hit." The ball wound up on her porch, The News reported – a description supported by teenage witnesses Joe Batch and Earl Archie.

The Courier-Express reported that a 16-year-old named Marvin Johnson came up with the ball after a furious scramble with some friends on Woodlawn. He tried to return it to Easter, who said: "No, son, that ball is yours," and then signed it for him.

A search for Batch, Johnson and Archie was unsuccessful. If they see this, and they remember the tale, we'd love to hear from them.

According to Boutet, Easter put the ball over the Offermann scoreboard twice more, although neither blast was quite as distant as the first. The third one, in 1958, struck a house at 125 Woodlawn. To underline Smith's point about the rich arc of neighborhood history:

That was the home of the late Eugene Richards Sr., who became a civil engineer at a time when many doors were closed to African-Americans – and played a key role, with the Army Corps of Engineers, in the 1969 initiative that temporarily shut down the American Falls, at Niagara.

His son, Eugene Richards Jr., 69, now in California, said the ballpark was "a huge presence" in their lives. The family home was right behind the scoreboard, and Richards said he remembers "the bang" when that home run hit the house, how his family went from room to room, looking for the cause.

They realized what happened when they found a baseball, on an upper porch.

Easter died in 1979, a union steward in Cleveland who was shot and killed by robbers just after he had cashed some payroll checks. He was only 63, and the tragic nature of his passing escalated the power of his legend.

As for Lum Smith, Easter remains part of a larger saga. His father, a factory worker who often brought his son to Bisons games, stepped off a train at the Central Terminal in 1946, leaving behind a harsh youth in legally segregated South Carolina.

This is an age when sheer awe can often be diluted, when a digital barrage of information threatens our collective sense of wonder. But Smith, who was an African-American child in a nation that still offered many barriers, went on to a career as a school administrator.

That took resilience and belief, faith he drew from his family and from community heroes who ignited hope. Standing at Masten and Woodlawn, at a spot he'll always equate with baseball in Buffalo, Smith recalled exactly what he felt that evening.

When Luke Easter hit the ball out of sight, Smith said, "It was like God did it."

Sean Kirst is a columnist for The Buffalo News. If you have memories or reflections on Luke Easter, email Kirst at skirst@buffnews.com, write to him in care of The Buffalo News, One News Plaza, Buffalo 14240 or read more of his work at https://buffalonews.com/author/skirst/.