On July 6, Lauren Krafft was just another college student, stocking displays in the Wegmans' produce section to help pay for a degree in dental hygiene from Erie Community College.

On July 7, on Buffalo Twitter and definitely in the aisles of the Sheridan Drive Wegmans in Amherst, she became a celebrity.

The source of her instant fame was a two-minute video she posted to Twitter that day.

The time-lapse video, set to the song "Fears" by MTNS, shows Krafft, 21, drawing a series of Buffalo landmarks on a folded piece of paper. The video, conceived in about 20 minutes and shot with an iPhone over about an hour, immediately proved an addictive combination of origami and rough-edged draftsmanship. In less than a week, it has accrued more than 700 retweets from Buffalonians, Buffalo expats, media organizations and other artists.

It starts with a sketch of skyline across a tightly folded piece of paper. It then morphs into a sketch of Krafft's favorite Buffalo building, the Richardson Olmsted Complex. H.H. Richardson's towers soon morph into a landscape of Niagara Falls, which folds out and morphs into the Labatt Blue-clad grain elevators at Buffalo Riverworks, which becomes a pair of beers held by a Buffalo Bills fan at New Era Field. The piece, a bravura exhibition of Buffalo pride, also features Coca-Cola Field, City Hall, the Albright-Knox Art Gallery and Duff's Chicken Wings.

Krafft, who recently braved a torrential downpour with her younger sister Julia to meet with a reporter in the Albright-Knox Art Gallery, said she has been flabbergasted by the attention she has received since she posted the video. In addition to high-profile retweets from Kiss 98.5 and One Buffalo, the Twitter presence of the Pegula sports empire, she's had several requests to design Buffalo-themed tattoos and earned a commission from a former Buffalonian who lives in South Carolina. 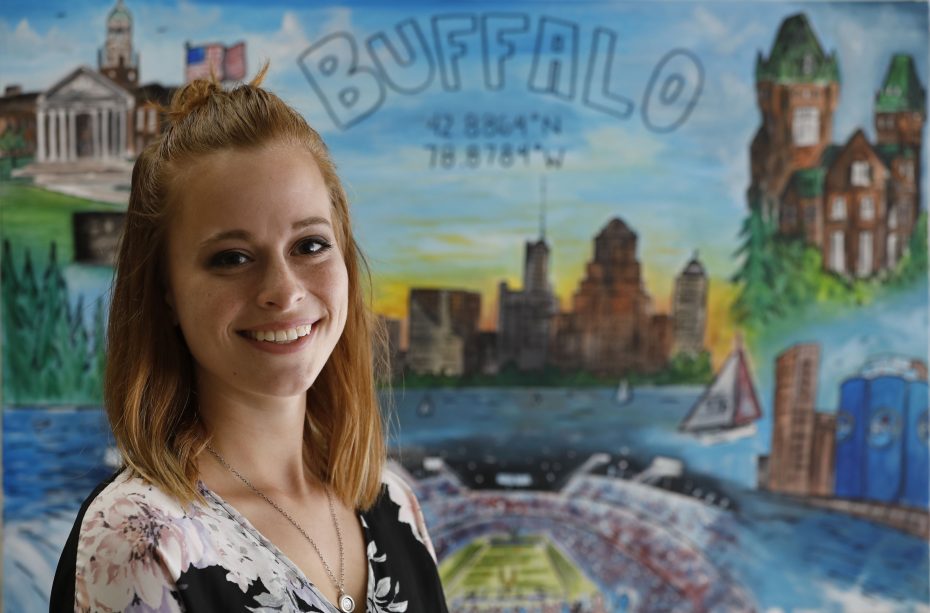 Artist Lauren Krafft poses with a painting she created for a patron in South Carolina in the Albright-Knox Art Gallery's sculpture court. (Derek Gee/Buffalo News)

And she is in talks with management at Wegmans, where she has become something of a local celebrity, to paint a mural in the store.

"After creating the video, I sent it to my friend, and I was like, 'Is this stupid? Should I even post it?'" Krafft said in the Albright-Knox café on Thursday. "I didn't think it was that great, honestly. It was just a fun little thing for me to do."

"omg I know her," Kraffts' Wegmans coworker tweeted, complete with an ecstatic selfie.

Krafft lives in East Amherst and attended Williamsville North High School, where her love of drawing was fostered by art her teacher, Robert Nice. She realized she had a knack for drawing as a first-grader, and she has been pursuing it as a hobby and an escape ever since.

Krafft's influences include landscape painter Albert Bierstadt, whose work is in the Albright-Knox, as well as Vincent Van Gogh. But she doesn't identify with any particular style, preferring to dabble in many kinds of media. She currently is designing tattoos, experimenting with body-painting and trying her hand at wood-burning, as well as expanding her largely landscape-based repertoire to include portraits.

Krafft's younger sister, Julia, said the social media sensation Lauren's video caused came as a shock to her and her family. "It was crazy," she said of the deluge of attention. "I wasn't expecting her to blow up like this at all, but I'm really proud of her."

Krafft said she has no plans to pursue art as a career, but intends to keep experimenting with new ways to create and share her work. In the meantime, she's excited to be close to finishing her training as a dental hygienist, a career she talks about with the kind of enthusiasm Bierstadt might have used to talk about the landscapes he painted.

"It's an art in itself," she said, going on to recount stories of emotional patients thankful for long-delayed cleanings and the artistry involved in making plaster molds. "I need to be doing something with my hands or I think I'd go crazy."