It wasn't FC Buffalo's goal this year to play spoiler, but their 3-1 home win Friday over AFC Cleveland - which knocked the defending National Premier Soccer League champions out of the 2017 playoff race - was a storybook ending for a non-playoff team.

"It's an incentive," said FC Buffalo head coach Frank Butcher of his team's desire to knock the Royals out. "We want to win every game, but it's nice to have an impact on the standings even though we weren't in [the race]. It's nice to send somebody home."

Akean Shackleford scored his conference-leading seventh goal to open the scoring, then his substitute Kendell McFayden did him one better, notching a brace in a span of 13 minutes, sending a sizable crowd at All-High into a frenzy.

"That's a great end to the season," remarked McFayden after the match. "The crowd we had out here tonight was second-to-none. For a team that's not going to the playoffs knowingly coming into this last game, to have all the fans we had out here was amazing."

FC Buffalo finishes the season with a record of 5 wins, 4 losses and 3 ties (5-4-3), the club's second-consecutive campaign with a winning record. After starting the season 1-3-2, FCB closed the schedule on a 4-1-1 run.

"In hindsight, any points along the way puts us in," Butcher added. "I think we're a very dangerous team right now, and that's the frustrating part - I would put us up against any other team in our league."

Three points Friday would have secured AFC Cleveland's playoff spot; instead, the Dayton Dynamo have clinched a trip, while the Erie Commodores need at least one point from their remaining two games to seal the other berth. If Rochester lose to Erie on Saturday, then FC Buffalo will finish fourth in the seven-team Midwest Region Great Lakes East Conference.

The Wolves have qualified for the postseason only once since their re-branding in 2010; they fell in the conference semifinals in 2013 to Erie.

*1-0, FC Buffalo, 59': Wolves midfielder Jake Cooper spotted Shackleford's diagonal run to the left side of the offensive third. Mindful of his fellow backs' line, Royals left back Ian Larson raised his arm to indicate Shackleford was offside at the time Cooper played the ball.

Instead of playing on, Larson inexplicably slowed, allowing Shackleford to race past and slam the ball past AFC Cleveland keeper Alex Ivanov from point-blank range.

*2-0, FC Buffalo, 74': With AFC Cleveland pressing hard in search of the equalizer, Wolves substitute Nick Szabo received a throw-in, spun quickly and drove a delightful cross into the box. Just seconds after entering a match for the first time since May 20, McFayden timed his run immaculately, launching himself at the ball to head powerfully past Ivanov.

"Luckily I turned two guys, took a touch, looked up and put it in the box, and Kenny did the rest," described Szabo, an Empire United Development Academy product who just graduated from Grand Island High School.

The quality of the delivery impressed even a veteran poacher like McFayden. "For a young guy like that, who's just trying to establish himself in the Buffalo area - we call him Skittles - for him to play such a perfect ball, I couldn't ask more from him." 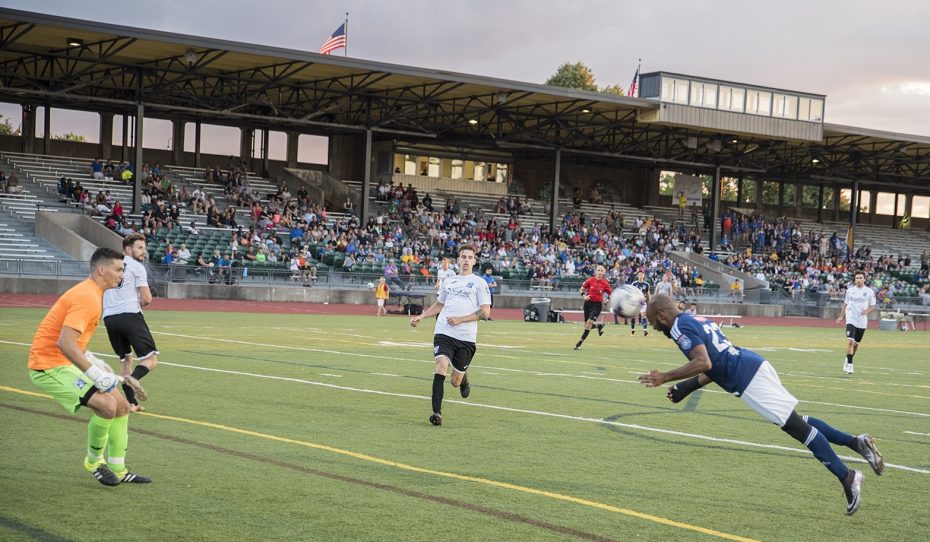 *2-1, FC Buffalo, 83': The Royals received a glimmer of hope late in the second half, as substitute Reymar Klochko pounced on a loose ball in the box, sliding to the turf to poke it into the roof of FC Buffalo's goal to make it a one-goal game.

*3-1, FC Buffalo, 87': The roommate connection of Chris Walter to McFayden stuck the knife in Cleveland, as the former's long ball from the right side drifted over the Royals' center back to the latter's chest. The man of the match took the ball down softly to his feet, in stride, before picking out the right side-netting.

"Me and Chris have been playing together for so long; he knows I'm going to play on the back shoulder of the center backs, and he blindly hit it and I was in right spot at the right time to put it away, take advantage of my chance," McFayden explained.

UGLY CONCLUSION: With AFC Cleveland aware their playoff hopes had been extinguished, the match took a dark turn. The Royals' Tom Beck slid FC Buffalo substitute (and assistant coach) Casey Derkacz from behind - not close to getting the ball - and Walter immediately took offense, sparking a large scrum in the middle of the field.

McFayden rushed into the fray with vigor, and when all was sorted out, Beck, McFayden and Cleveland's Mike Derezic were all sent off.

"A guy lunged out at Casey, and then Chris got involved, and I saw a punch get thrown, so I got involved, and it's one of those things where you've played with someone so long you defend them until the end," McFayden remembered.

Buffalo's offender understood the circumstances that sparked the melee, but wasn't about to back down once a punch was thrown.

"When you have an opportunity like [Cleveland] did to come out here, win a game and go to the playoffs, but then you're on the road and you're down 2-0 or 2-1, you can see the frustration building and building, especially because they're a quality side and not used to losing," the former Rochester Rhino said. "It was an altercation out there and you've got to defend your teammates, so I just got involved."

McFAYDEN MOTM: The late fracas and sending off aside, McFayden thrived in his return from a broken hand, scoring on his first touch and constantly finding threatening positions. His eagerness to return to the side certainly fueled his effort.

"It's been seven and a half weeks, and this is the first time I've touched the ball," McFayden said. "To get back on the field with the guys, it just felt really good. I was itching all week. I got the cast off on Wednesday, got cleared on Wednesday, was very anxious to get back out on the field."

BUTCHER REFLECTS: "I'm just happy with all the hard work we put in - at the beginning of the year, even though we were outworking and out-chancing teams, we didn't get the results we wanted," the first-year head coach said.

"I'm glad for the guys, to send them out on a positive note; they were rewarded for everything they did this year. They could have given up a lot of times along the way here, and the last couple games they've just been fantastic."

PROPS FOR THE FANS: "It's awesome," Szabo said of the energy created by the crowd, which likely numbered between 800 and 900. "Thank you to all the fans who come out and make this happen for us - it's really a great atmosphere here."

SPINE PROBLEMS: Cleveland were without first-choice center back Coletun Long, who was serving his suspension for a red card against Erie, as well as veteran attacking center midfielder Admir Suljevic, who's struggled with back issues for much of this summer.