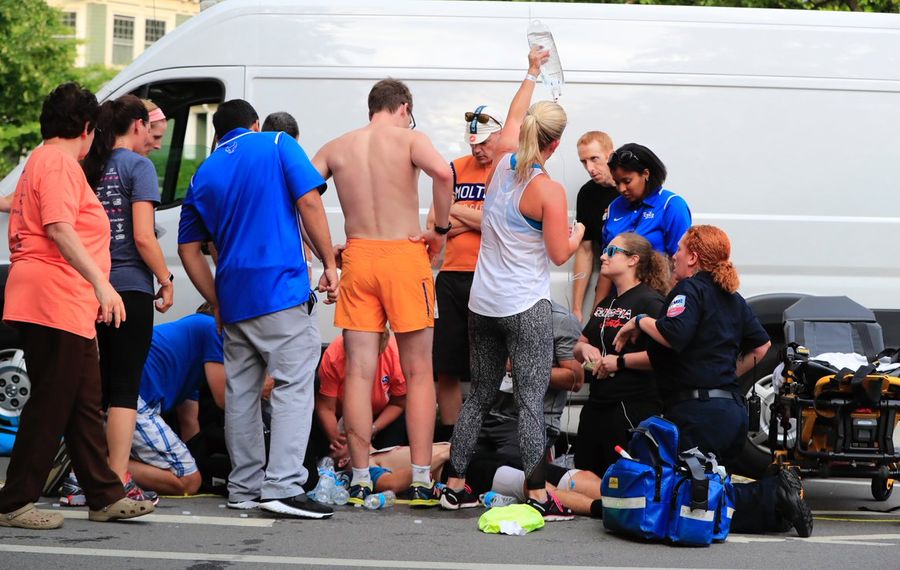 An unidentified male runner collapsed at the finish line at the end of Friday night's Subaru 4-Mile Chase in Buffalo.

The athlete received medical attention almost immediately, and was treated in an ambulance for several minutes. Race director Jim Nowicki said the runner had a pulse and was breathing when the ambulance left for Gates Vascular Institute.

There was no further word on the runner's status.

Nowicki was obviously a bit shaken when he discussed the incident shortly after the ambulance's departure.

"It's ironic - I was standing next to someone while watching the runners go through, and she asked if we ever had any problems," he said. "I said, no. We've had people go down - going too hard, or dehydration. But we've never had anything as serious as this.

"We all know this is one of the dangers of the sport. Stuff like this can happen. It's a nightmare."

Most major races have some sort of medical presence at the event, and Nowicki was very glad about that.

"Our medical team was right there; it's not like we had to call 911. They were feet away," he said. "We are prepared, and our game plan is not to only have people at the finish line, but to look at people a bit before that to see if they are struggling 220 yards from the finish line."

Jason Longo of West Seneca doesn't get the chance to race against world-class athletes very often. He came away from the Chase impressed.

"They went out like a sports car," he said about the elite runners. "You get caught up in it for a while, and they you realize you are going too fast.

"It's unreal. They run so smoothly, so effortlessly."

The 41-year-old won the Father Baker race earlier this year, which earned him a free entry into the Chase. He decided to take advantage of the opportunity.

Longtime runner Edna Hyer was in the Chase field, as usual.

Hyer, a Western New York Hall of Famer who is still running in her 80s, looked around the scene before the race as hundreds of runners prepared to take part. It's quite a change from the event's early days.

"I remember when it was the Black Tower race; we used to get a bottle of wine there," she said. "Way back then, Jim Nowicki used to give awards to age-groups up until 95. The race directors need to know they should do that, even if people don't compete in them every time. That's how we keep people going."

Hyer continues to follow a running schedule that puts almost any athlete to shame.

"I did the 5K race in Utica last weekend," she said. "It was an experience, because I didn't think the 5K was that big. I thought there would be a few leftover people from the Boilermaker 15K. I got out there, and there were 4,000 people there."