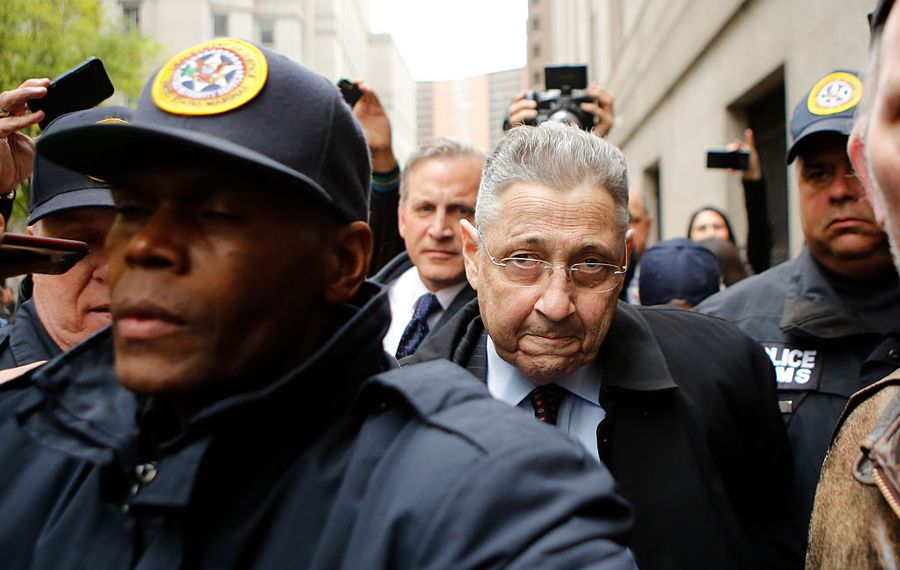 ALBANY – The corruption conviction against Sheldon Silver was tossed out by a federal appeals court Thursday, a surprising turnaround for the Manhattan Democrat who helped run Albany for a generation.

The appeals court vacated Silver’s 2015 conviction for honest services fraud, extortion and bribery, along with the 12-year sentence he was given. The decision was based, in part, on a U.S. Supreme Court decision last year that overturned a corruption conviction of former Virginia Gov. Bob McDonnell.

Federal prosecutors said they will move for another trial against Silver.

Silver, 73, enriched himself by using his post as the Assembly Speaker to steer millions of dollars to himself, according to evidence at his trial.

“We recognize that many would view the facts adduced at Silver’s trial with distaste. The question presented to us, however, is not how a jury would likely view the evidence presented by the government. Rather, it is whether it is clear, beyond a reasonable doubt, that a rational jury, properly instructed, would have found Silver guilty," the appeals court wrote in its decision this morning.

Based on both the McDonnell case, as well as evidence in Silver’s trial, the appeals could said “we simply cannot reach that decision” whether a properly instructed jury would have convicted Silver.

The court said evidence of  extortion and honest services fraud against Silver was sufficient to prove his guilt, but that the district court’s instruction to the jury on those charges “was erroneous” under the terms of the Supreme Court’s decision in the McDonnell case.

The appeals court, in its ruling, vacated the conviction of Silver, but remanded it back to the district court for possibly another trial.

“We are grateful the court saw it our way and reversed the conviction on all counts," Steven Molo and Joel Cohen, Silver's lawyers in the case, said in a written statement.

The conviction reversal comes as another former top legislative leader in Albany, former Senate Majority Leader Dean Skelos, awaits a decision on an appeal in his own corruption conviction.

The two cases upended Albany, a town that had otherwise grown accustomed to high-profile corruption cases. But the two, separate cases against Silver and Skelos drove both men from office and brought in new leadership in the form of Assembly Speaker Carl Heastie and Senate Majority Leader John Flanagan.

In their appeals, Silver and Skelos found agreement in their legal strategy: the Supreme Court’s decision last year in the McDonnell case should pave the way for reversals of their convictions.

The former Virginia governor was convicted of bribery in that case, but the Supreme Court “clarified” the definition of what constitutes an official act in crimes involving honest services fraud and extortion, the appeals court wrote Thursday in its decision. Silver’s appeal was based on a claim that his conviction was wrong because the trial court’s instructions to the jury defined an official act “as any action taken or to be taken under color of official authority,’’ the court noted.

McDonnell and his wife had been charged with taking $175,000 in loans and gifts from a Virginia businessman. While the Supreme Court in June 2016 called the actions involving McDonnell “distasteful” and filled with “tawdry tales of Ferraris, Rolexes and ball gowns," the actions involving McDonnell could not be considered “official” acts. He said more “limited” definition of what is an official act was required in such cases, still leaving, the court said, “ample room for prosecuting corruption.’’

Silver also appealed the “sufficiency” of the evidence in his conviction of all counts following a month-long jury trial in lower Manhattan.

“Though we reject Silver’s sufficiency challenges, we hold that the District Court’s instructions on honest services fraud and extortion do not comport with McDonnell and are therefore in error," the three-judge appeals court ruled.

The case against Silver was brought by former U.S. Attorney Preet Bharara, the federal prosecutor fired earlier this year by President Trump. Bharara brought a number of corruption cases against politicians in Albany, but the cases against Silver and Skelos were touted as among his crowning achievements in his office’s targeting of elected officials who he said violated the public’s trust.

Acting U.S. Attorney Joon H. Kim, who took over the prosecutor’s office after Bharara was fired, sent a strong signal that the Silver case is not being dropped.

“While we are disappointed by the Second Circuit’s decision, we respect it, and look forward to retrying the case,’’ he said in a written statement this morning.

Kim noted that the court also ruled that the evidence was sufficient to find Silver guilty of corruption.

“Although this decision puts on hold the justice that New Yorkers got upon Silver’s conviction, we look forward to presenting to another jury the evidence of decades-long corruption by one of the most powerful politicians in New York State history. Although it will be delayed, we do not expect justice to be denied," the prosecutor said.

Silver was convicted of engaging in a quid quo pro scheme in which he used his official position to drive millions to himself through arrangements with two real estate developers and a cancer researcher at Columbia University.

“Let’s us be clear, the facts are not in question. Mr. Silver used his position in government to direct state resources into a scheme that paid out $4 million into his pocket," said Susan Lerner, executive director of New York Common Cause.

Lerner said the appeals court has “misinterpreted” the law and is “settling legal standards which fly in the face of the public’s expectations." She said Silver is “absolutely guilty of corrupting his office” and that Common Cause believes “the people can win at retrial.”

Heastie, a Bronx Democrat who was tapped by his Democratic colleagues to run the Assembly after Silver stepped down from his post in 2015, offered a brief assessment of his predecessor's legal news Thursday. "As I have said we must respect the judicial process. It is a pillar of our democracy. Today's decision is a part of that process."

After an appearance in Buffalo this morning, Cuomo did not signal his personal view on the court's decision involving Silver. "Let's wait to find out what the final disposition is,'' Cuomo said of the expected retrial.