After about 20 years in the medical field there isn't much that shakes up Dr. Elad Levy.

But 7-year-old Kaeden Mitchell made him nervous as the boy lay on the operating table.

Both of Kaeden's vertebral arteries, a vital source of blood to the brain, were torn when a Rottweiler attacked Kaeden on June 7 in Niagara Falls. The tears blocked blood flow to his brain, said Levy, medical director of neuroendovascular services at the Gates Vascular Institute. It's very rare for someone to survive without those vertebral arteries intact, Levy said.

But on Wednesday, Kaeden played a video game on his red Nintendo DS, seated at the same conference table as the doctors who had operated on him a month before. He tried to concentrate on his game of Animal Crossing while the adults talked at a news conference at Gates Vascular Institute. Kaeden had been discharged from the hospital a week before, after having the first recorded stent reconstruction of its kind performed on a child in the country, according to Levy.

"This is what we do. This is why we get up in the middle of the night," Levy said. "This is why I became a doctor."

Upon arrival at Women & Children's Hospital, Kaeden was surviving through smaller blood vessels from the other parts of his brain. Without more blood flow, the injury could be fatal.

"If I can't open up the vessels we'll be looking at a tragedy," Levy said he thought while operating on Kaeden. 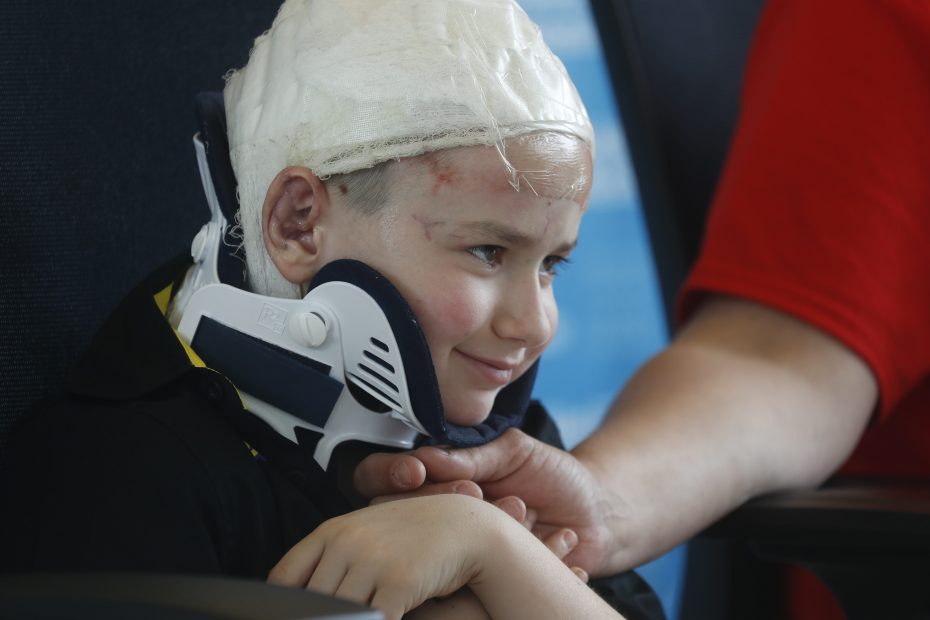 Two medical teams from Gates Vascular and Women & Children's Hospital drove a wire measuring fourteen-thousandths of an inch in thickness through one of the arteries to Kaeden's brain, he said. The teams rebuilt the 7-year-old's artery using a self-expanding stent designed for use of aneurysms in an adult brain — the device that most closely matched the vessel.

Pediatric surgeons often re-purpose devices and technology for the rare cases they come across, said Dr. Kathryn Bass, one of Mitchell's doctors and the medical director of pediatric trauma at Women & Children's Hospital.

The team was able to open one of the two arteries to Kaeden's brain. The other remains closed, Bass said.

He was very lucky, Levy said, that that one artery was robust enough to provide enough blood flow to the entire brain.

"Kaeden's case, at least for me, is an excellent example of the interplay of excellence between the hospitals at Kaleida. This is why you need a children's hospital," Levy said. "... Without that interplay we would not have these miraculous and fabulous outcomes like we had with Kaeden."

The stent will stay in Kaeden for the rest of his life. Over time, the cells of the inner wall will grow over the stent and it will become a part of him, Levy said.

There will be some life changes. Kaeden will have to avoid such activities as contact sports and roller-coaster rides. But he's already back to playing with his friends and having sleepovers — just like he did before the dog attacked him, said the boy's mother, Vikki Avino.

Doctors will still have to reconstruct two wounds on the back of his head that go to the bone, Bass said. One or two more surgeries will get his scalp fully closed, but he's already made great progress, Bass said. She attributed it in large part to Kaeden's positive spirit and support from his family. 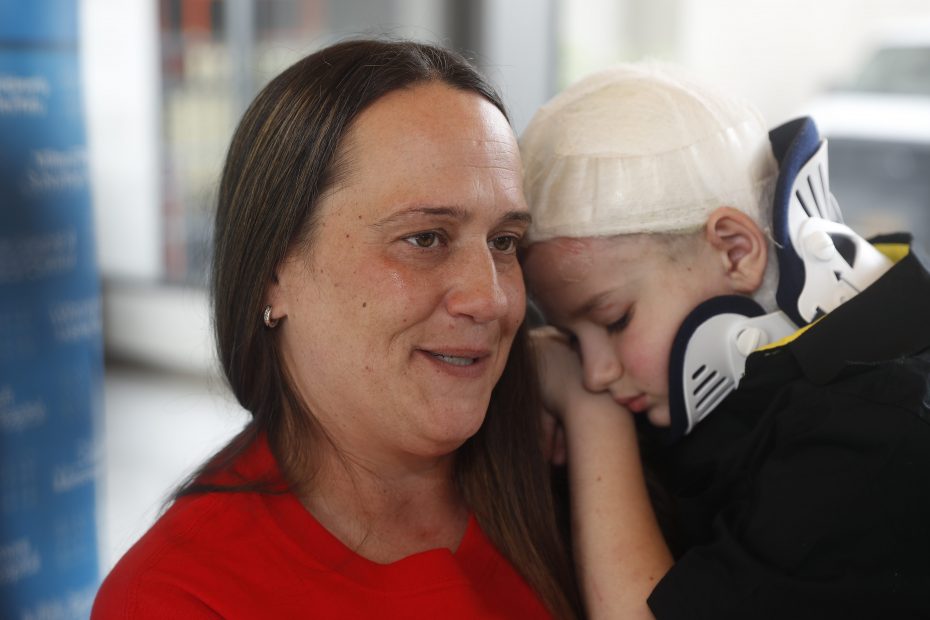 Vikki Avino holds her son, Kaeden, who suffered what could easily have been a fatal injury when he was attacked by his baby-sitter's Rottweilers. "I didn't expect him to be sitting here today," Avino said. (John Hickey/Buffalo News)

Avino stayed by his side throughout Kaeden's stay in the hospital.

On the day of the attack, Avino dropped her son off at his babysitter's house a few streets from their home. His babysitter owned two Rottweilers, each weighing up to 160 pounds, estimated Niagara Falls Police Lt. Jason G. Sykes.

When Sykes arrived on scene he saw Mitchell bent on his knees and covered in blood, Niagara Falls police said. The owner of the dogs, Keri Ann Sweatman, 44, was holding back one of the Rottweilers while the other stood to her side.

"He's been quite the trooper through everything," Avino said.

When she added that he was the strongest kid she knew, Kaeden interrupted with a correction.

With a knowing expression, Kaeden said he was "the strongest kid in the world."

Kaeden, who rested his head on his mother's shoulder as she carried him, broke from the embrace once more to say the experience he went through was "torture" for his mom.

"I didn't expect him to be sitting here today," Avino said.

But she said she's so grateful to the doctors who saved her son and made it possible for him to go home.

She hugged them each for an extra beat and said, "Thank you. Thank you so much."

"And my family," he quickly added.