Outside the arched windows of the Discover Niagara Shuttle, the sights passed by – the Rainbow Bridge, the quaint shops of Lewiston, the Power Vista, a living quilt stitched together by glimpses of the green water of the Niagara River.

Inside the shuttle were people from all over the world.

They gazed at the passing scene, studied the fold-out maps that outlined each stop on the shuttle route, or watched the screen in the front of the car, which played a video loop about the attractions and business partners.

Since urban renewal ripped out the heart of downtown Niagara Falls in the 1970s, tourism experts have faced the challenge of keeping visitors for longer than the hours it takes to see the falls, ride the Maid of the Mist and maybe see the Cave of the Winds.

The area is rich with scenic beauty, excellent restaurants and significant historic sights, but finding out about them, much less getting to them, has long been a challenge for visitors from across the country and across the world.

Enter the Discover Niagara Shuttle, a project launched last year by the Niagara Falls National Heritage Area and funded by the USA Niagara Development Corp., the New York Power Authority and the Western New York Power Proceeds Allocation Board, New York State Parks and the Niagara Tourism and Convention Corp. This year's shuttle is also being funded by the City of Niagara Falls, the Town of Lewiston and Niagara University.

On a recent drizzly morning, the shuttle was occupied by families from Pittsburgh, Nebraska and Georgia, a couple from Ontario and another couple from South India. 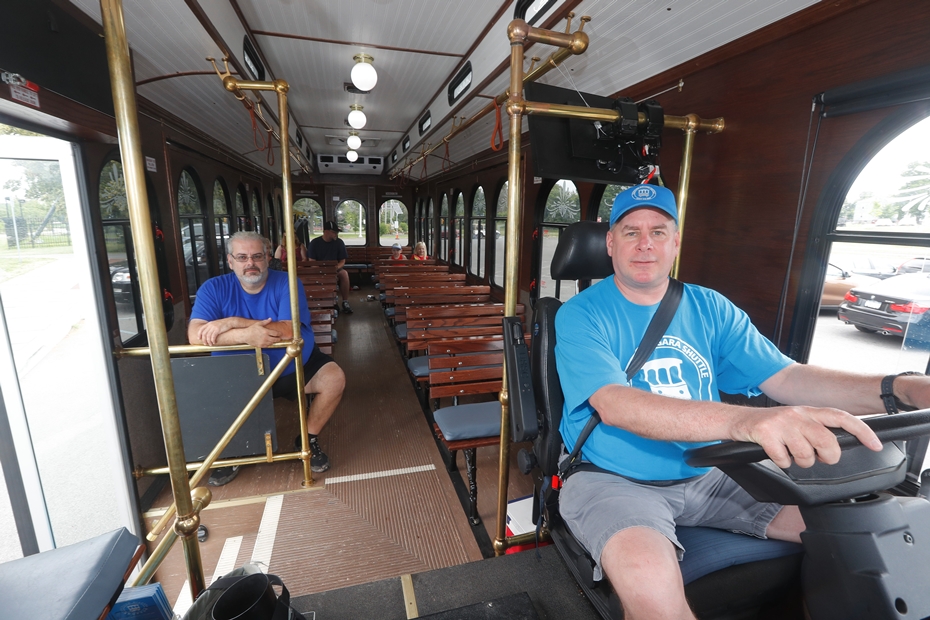 Discover Niagara Shuttle driver Mike Gilbert with a few of the day's passengers. "It can be empty one minute and the next thing you know there are 20 people," Gilbert said. (John Hickey/Buffalo News)

The shuttle has transported plenty of people who know exactly where they are going, as well as more than a few who haven't got much of a clue. It has motivated most of its riders to see sights far from the falls themselves. And rides on the shuttle even bookended one couple's Niagara Falls wedding proposal.

The Discover Niagara Shuttle "allows even more people to visit places in the region they typically wouldn't experience," said Aaron Dey, operations manager for the shuttle.

It sounds great. But to really appreciate the impact of the free lift on the roughly 15-mile, mostly north-south route, you have to climb on board.

The first impression of the 28-passenger blue-and-white shuttle is its cute old-time touches, which include brass handrails with leather overhead grab straps and wooden slat seats with scrolled wrought iron legs topped with comfortable blue cushions.

Affable driver Mike Gilbert greets each passenger and asks each group, "Where are you headed?" to make sure he isn't driving anyone trying to reach Buffalo. On this day, he picks up some families who have a plan, some that have plans that change along the way, and one couple, Tom and Sharon O'Connor of Waterdown, Ont., who, when asked, "Where are you headed?" reply, "Where are you going?" before climbing on for an enjoyable ride.

Three trolleys and shuttles cover some of the same Niagara Falls territory, so they are color-coded. The Niagara Falls Scenic Trolley – the green line – transports passengers in a loop from Goat Island to the Niagara Gorge Discovery Center. Day passes for the hop-on, hop-off trolley that visits 14 attractions are $3 for adults, $2 for children age 6 to 12, and free for younger children.

The red line, the Metro Niagara Falls Trolley, runs in downtown Niagara Falls and east to the Fashion Outlets of Niagara and Little Italy. Tickets cost a few dollars per person but some hotels provide passes.

The blue-and-white Discover Niagara Shuttle service operates two 28-seat trolley-style buses and two smaller mini-buses. They hit 16 stops between the official Niagara USA Visitors Center at 10 Rainbow Blvd. to Old Fort Niagara. Passengers are free to hop on and hop off, and a free app allows passengers to track the movements of the shuttles.

Lissa Ludinich and her sons Jude, 9, and Shane, 7, traveled from the Pittsburgh area with Rhonda Pipp and Angel Fraley, her daughter Angela Fraley, 18, and friend Gary Carpenter, 19.

As they headed for Old Fort Niagara, Ludinich said, "In all reality, with the parking here and parking there, I don't think we'd be making this trip" to the fort. 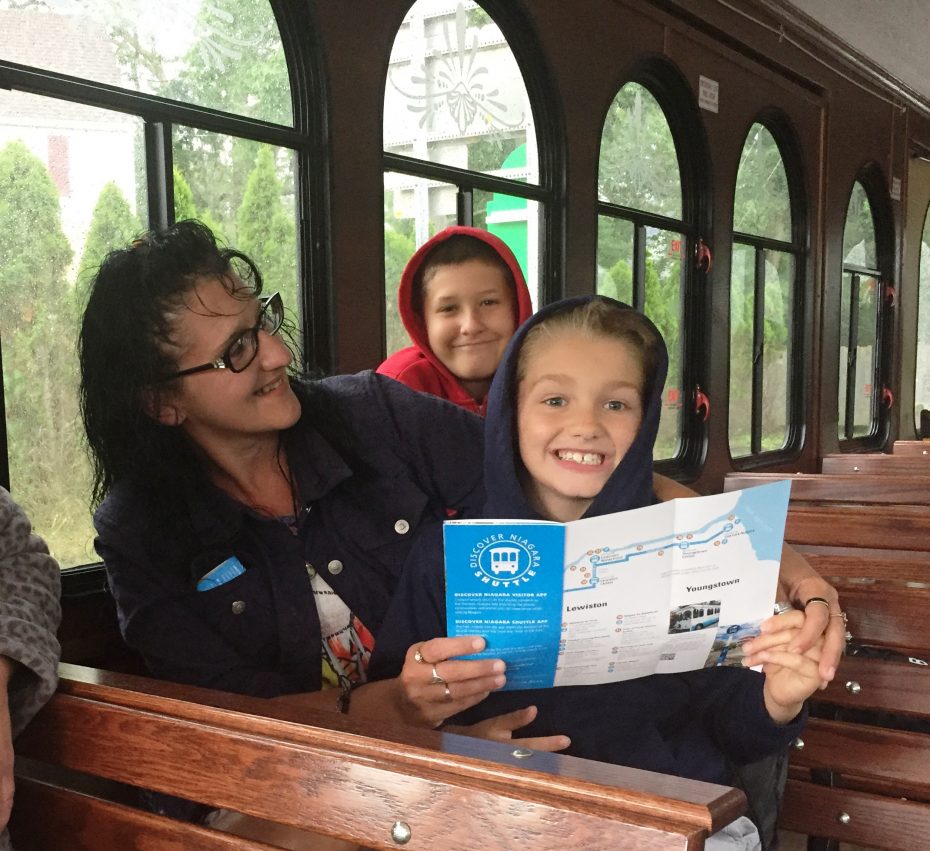 Loading the youngsters into the car for another ride after their long trip would make them restless, she said. But the boys chose bench seats across the aisle from each other and were well-behaved as each took in the sights from his own window. "They think this shuttle is a cool ride; this is entertainment to them," said Ludinich.

Linda and Shane Pedersen of Pierce, Neb., were on the shuttle with their children Ashley, 16; Noah, 13; and Madi, 10.

The family took Amtrak to Niagara after Ashley's choral group sang in the 500th Anniversary of the Reformation Hymn Festival at Carnegie Hall. The family spent a week in Manhattan and then took the Amtrak to Niagara Falls. "We've rented a car before and it's kind of a hassle," said Linda Pedersen.

They had researched the attractions and were headed from downtown Niagara Falls to the Niagara Power Project Power Vista.

Elva and Patricio Silis of Athens, Ga., with their children Vanessa, 17, and Ulisses, 12, also tacked a trip to Niagara Falls onto a journey to Manhattan, from which they drove to Niagara Falls.

"For two or three years, I wanted to see Niagara Falls," said Elva Silis. The kids loved the bustle of Manhattan, but the fireworks over the falls also got their approval.

Next up for them might be the Maid of the Mist, but in the meantime they rode the shuttle north to check out Old Fort Niagara.

At the Lewiston waterfront, Tom and Sharon O'Connor, occasional visitors from a town near Hamilton, hailed the shuttle and climbed aboard for the trip down into Niagara Falls.

They drove to Lewiston, where they were staying for a few days, but said they were wary of finding parking at some of the sights. But they enjoyed the trip through the neighborhoods "and the price is right," said Tom O'Connor.

Most riders board or leave the shuttle at the downtown visitors center, the Niagara Gorge Discovery Center, the power vista or Fort Niagara, said Gilbert. Still, "It can be empty one minute and the next thing you know there are 20 people."

That's exactly what happened at the northernmost stop at Old Fort Niagara. A crowd of people boarded, then, after some discussion, went back into the fort, leaving Parimala and Gopal Jamadagni, from South India, who were headed back to their hotel while their daughter, son-in-law and family stayed behind to tour Old Fort Niagara.

The two, who were farthest from home among visitors riding the shuttle on this day, were impressed with it as they settled into a middle seat. "In Boston we took a tour bus, but it wasn't free," said Parimala.

"This area is beautiful, well-planned and clean," she said, nodding in approval at downtown Lewiston, with its colorful shop fronts and well-tended flowering baskets.

Dey said ridership is "trending at 44 percent higher on average than last year, with the best part of the summer ahead of us."

"Dependent on overall tourism numbers to the area, we see no reason for us not to keep up this pace," he said. 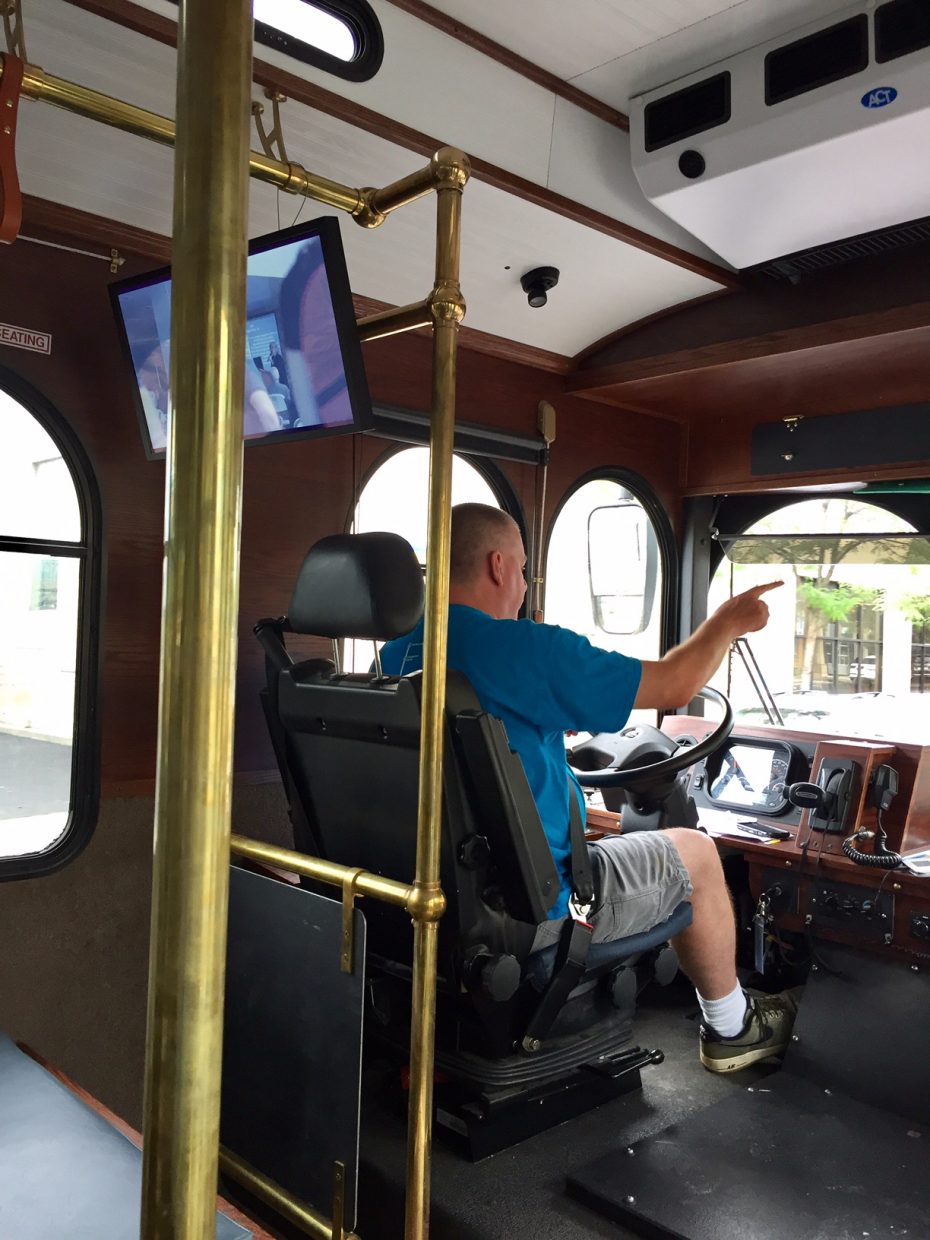 Discover Niagara Shuttle driver Mike Gilbert is framed by some of the trolley-style vehicle's brass rails as he points out some of the restaurants on Third Street in Niagara Falls to his riders. (Anne Neville/Buffalo News)

Gilbert, who said this is his dream job – "driving and talking to people" – chats with riders who sit in the front seats about falls daredevils and the Underground Railroad. It's not a classic tour bus because although the drivers do share information, there is no sound system and only people in the front rows can hear.

Gilbert, one of 13 drivers, started driving the shuttle in May and will finish when the season ends in October. For now, daily service runs from 9 a.m. to 6 p.m. Sunday through Thursday and 9 a.m. to midnight Friday and Saturday. The late hours, said Gilbert, enable people from the downtown hotels to shuttle to Lewiston or Youngstown for dinner or a dusk waterfront walk.

"The drivers are great; they are a very dedicated group," said Dey. "Last year, the last day we ran when we finished the season, drivers were waved to by businesses and locals along the route who benefited from the shuttle."

One local who benefited from the shuttle was a downtown hotel manager who took it to and from work for a few days when his car was out of commission. Gilbert said he enjoyed talking shop with someone whose business benefits from the shuttle.

A few weeks ago, the buses were filled with delegates to the Daughters of the Nile convention, said Gilbert. "On the weekend, we see more people from neighboring states – Ohio and Pennsylvania – doing three-day trips," he said.

His most memorable passengers so far were a couple from the Catskills who were camping at Four Mile Creek State Park. The pair parked their car and got onto the shuttle with their son, heading to Niagara Falls to ride the Maid of the Mist.

When he picked them up at the end of the day, Gilbert asked them how the tour had been. In reply, the woman flashed an engagement ring.

"He'd gotten down on one knee on the Maid of the Mist and proposed," said Gilbert, still grinning widely at the memory. "So that was a good day."

To a person, the tourists on the shuttle were happy with their trips and the attractions. Most listed several stops they had already made, from the Maid of the Mist and Whirlpool State Park to the Cave of the Winds and the Lewiston waterfront, and explained what they looked forward to most, from Old Fort Niagara to the Power Vista.

Most were surprised to hear that local residents don't visit the attractions much, but Parimala and Gopal Jamadagni were philosophical. "It is always so," she said. "So near, yet so far," he added.

Carpenter, from Pittsburgh, had a different point of view. "If I lived around here, I'd be up here every day doing that stuff," he said. "And it's a lot easier to get on a shuttle instead of having to drive."