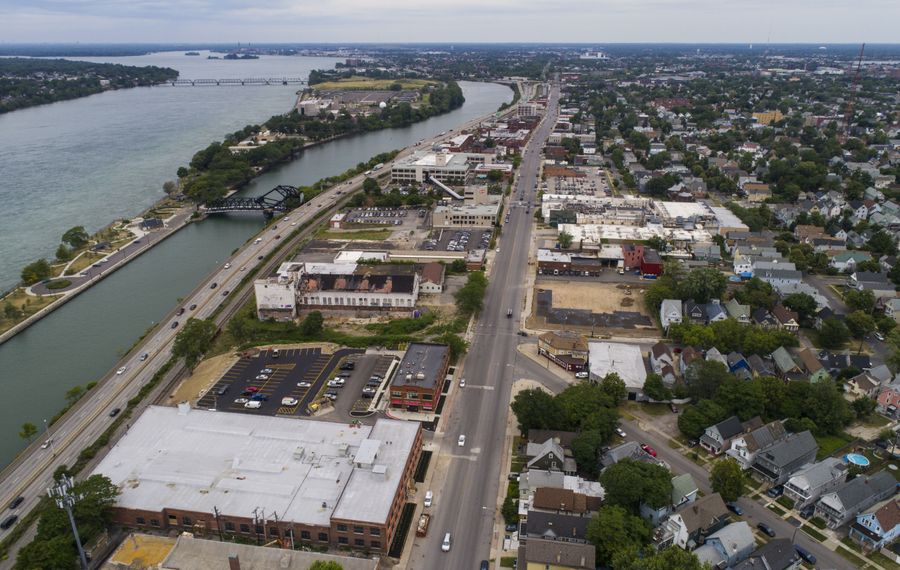 For 10 years Martin Danilowicz tried to open a restaurant on Niagara Street.

The street looked positioned for a comeback, he said, with its proximity to downtown, the Elmwood neighborhood and the Niagara Thruway.

"But nobody would allow me into their building because everyone said it would never work," Danilowicz said.

Certainly, the 1.3 mile stretch of Niagara Street – parallel to the nearby Niagara Thruway and the Niagara River – had looked dingy for decades, with shuttered manufacturing buildings and industrial blight.

But then work began to convert a building into apartments offering views of the Black Rock Canal, plus it offered first-floor commercial space. That's where Danilowicz finally found a spot for his restaurant, Roost. He's on the ground floor of the Crescendo, which was once home to a box and carton manufacturer. Today, the Crescendo is a 41-unit building with one- and two-bedroom apartments with rents ranging from $1,390 to $2,150.

He opened the modern, high-end restaurant last December and it does a brisk business.

"Everyone told me I was crazy to be on Niagara Street," he said. "So far, it's been great. I think in the next two years people are going to drive down Niagara Street and they are going to be looking around and saying, 'OK, where am I?' This is finally not going to be the industrial street it was for so many years. It is going to be much more of a residential neighborhood." 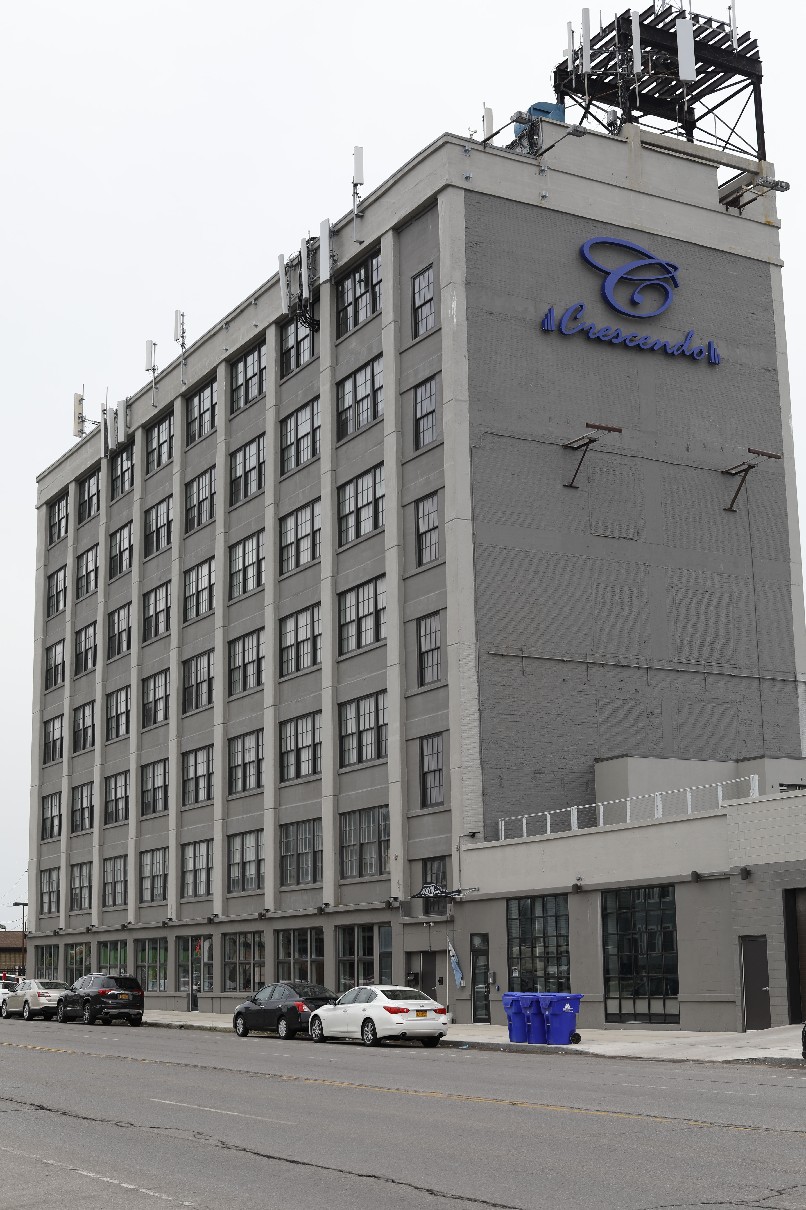 That's what makes the more than half-dozen apartment projects along the dozen blocks of Niagara between Busti Avenue and Tonawanda Street – a stretch known for the presence of Rich Products' corporate headquarters – so surprising.

'Best is yet to come'

"We really thought it was the right time," said Heather Hammer, pastry chef for Cookie, owned by Rich Products. "Niagara Street is totally having this change, and we thought why not do something for foot traffic?"

On Aug. 1 comes the opening of 1,000 student apartments at Forest Avenue and West Street, one block east of Niagara Street. And a couple of blocks away, on Tonawanda Street, developers are converting the former New York Capital Freight building into 37 apartments and retail space.

"We've long felt the West Side of Buffalo is one of the best-kept secrets across our city," company spokesman Dwight Gram said. "It's really been gratifying to see the rebirth taking place across the city, not just Niagara Street. As an anchor tenant and employer, we're thrilled with the new development taking place all around our campus.

"There is a very exciting future for Niagara Street, and the best is yet to come," Gram said.

The street's resurgence will not be limited to changes to buildings.

By 2019, the street's four lanes will drop to two, with a center turn lane, in a bid to slow traffic. A two-lane "bike cycle" – the city's first – will operate on the west side of the street. New lighting, sidewalk improvements, green medians, stormwater retention and curb extensions are also coming.

The nonprofit has worked closely with the Brown administration, businesses, community groups, the Niagara Frontier Transportation Authority and the University at Buffalo's School of Architecture and Planning to develop the middle section of Niagara Street.

"It was so quiet here a year ago that I couldn't even get internet service," said Bernice Radle of Buffalove Development, whose office is a stone's throw away from the Mentholatum Building at 1360 Niagara St., where upscale apartments are expected to start leasing in August.

"Now there's a lot of different efforts going on up and down Niagara Street. It's pretty unreal to see where it's come."

An $11 million investment in streetscape improvements a few years ago turned Ohio Street from an industrial stretch to an attractive roadway that now boasts two new apartment buildings and other improvements. Similarly, plans by Buffalo's Department of Public Works and the Buffalo Sewer Authority to make improvements along Niagara convinced some developers to invest.

"Infrastructure is very important. Look at what they did with Ohio Street," said William Paladino, chief executive officer of Ellicott Development, which owns seven buildings on or near Niagara Street and several parcels on Ohio Street. "I would hope the same type of thing will happen here, too."

The changes will give Niagara Street a fresher and more attractive appearance. It is also intended to reduce the numbers of speeding cars on Niagara Street, seen as an impediment to making the street pedestrian- and bike-friendly, and to drawing retailers.

"Speed is a problem on Niagara Street – a huge problem – and there are a lot of kids crossing with bus stops nearby," said Radle, who wants a traffic light put at Niagara and Lafayette streets.

Mike Finn, an engineer in the city's public works department, said putting Niagara Street on a "road diet" should slow traffic. That was the case, he said, on a stretch of Delaware Avenue downtown a few years ago. 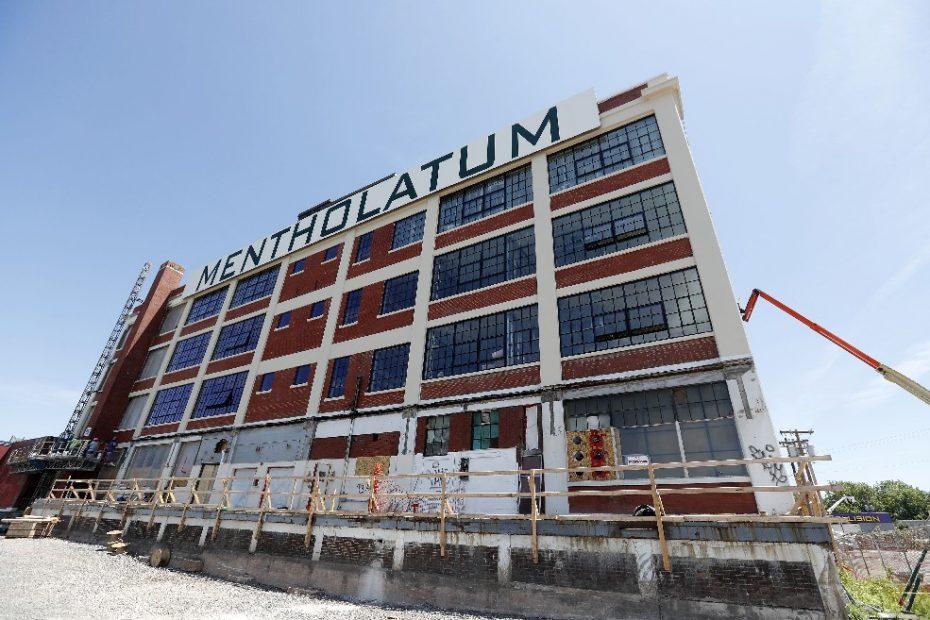 The river side of the Mentholatum building. (Mark Mulville/News file photo)

"This will give the sense the roadway is more narrow and not as wide as it appears now," Finn said. "It will encourage people to drive more deliberatively, and to pay more attention."

The reduction in lanes has Sharon Boyd, a server for nearly 40 years at Santasiero's, skeptical.

"Whenever there is an accident on the Thruway we get lots of traffic on Niagara Street," Boyd said.

But Boyd is thrilled overall by the changes taking place.

"The upswing in the area is just amazing. I hope these apartments all fill up. I would love to see more people move into the area."

Five years ago, Angelo Natale owner of Natale Development, and Bobby Corrao, the company's president, scouted buildings on Niagara Street. That's when they became intrigued by the Crescendo, located at 1502 Niagara St.

"When we got inside and saw the view, it sealed the deal," Corrao said "It's a totally different vantage point of the city when you're in that building."

Natale also purchased a vacant four-story brick building across the street that the company is considering converting to apartments and possibly a restaurant.

The two largest developers on the street are Ciminelli Real Estate Corp. and Ellicott Development.

The Mentholatum daylight factory building, built in 1909, could be the jewel of the street, with stick-built windows that are replicas of the originals once again fronting Niagara Street.

A Mentholatum sign from 1920 with 9-foot-tall, "Mentholatum green" letters has been taken out of storage, restored and put back on the roof. It will be lit up with LED strips along its entire length to make it visible from the I-190.

"I've always admired this building driving up and on the 190, so I was excited to have an opportunity to work on it," said Amber Holycross, Ciminelli's development manager.

Dennis Penman, executive vice president, said the NFTA's willingness to increase bus transportation on Niagara Street, together with the infrastructure improvements, convinced the company to invest in Niagara Street.

Penman said the company's target for the apartments are primarily young adults. 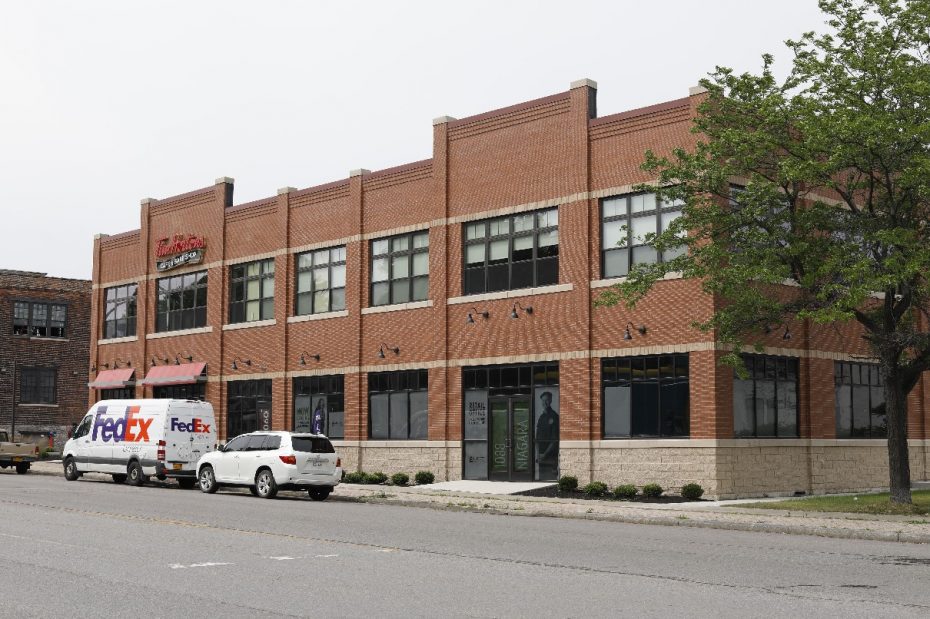 A new Tim Hortons is among the recent changes along Niagara Street. (Derek Gee/Buffalo News)

"Our market is really a millennial demographic that's very interested in bike safety and bike lanes and the availability of quality public transportation," Penman said. "The building was located to take advantage of those improvements by the NFTA and the City of Buffalo. We knew they were coming, and were confident in making our investment."

One- and two-bedrooms will range from $1,000 to $2,200, and are expected to be ready for leasing in August, with occupancy in January 2018. The apartments will offer sleek kitchens and washers and dryers in each unit, semi-private outdoor spaces and a dog wash station in the basement, which Penman said are popular in California.

The rents raise concerns that those living in the area currently, including recent immigrants, will be priced out as Niagara Street trends upscale.

"Rents are getting higher, and we don't want to push out the community that's already here," Rowe said. "We have a very dense neighborhood right off of Niagara Street, and want to be cognizant of that."

"There is a lot of affordable housing for people who don't make a lot of money, and I worry about where they are going to go," Nichols said. "A lot of the people don't speak English.

"I'm worried that the culture is going to be swept away like on Elmwood Avenue, which is a great street with a lot to do, but lacking in diversity."

Nichols said he has two workers who live nearby and have seen their property taxes rise 20 to 30 percent.

"I don't know how conducive it will be for them to stay here, because they won't be able to afford it," Nichols said. "That's the downside."

But Nichols said he's also glad to see the improvements.

The wait for right time

Ellicott Development is developing two of its six properties on Niagara Street and one on Busti Avenue. The company has plans for the others.

"I think Niagara has always been desirable right on the river," Paladino said. "We sat on the properties for eight or nine years. We were hopeful. I think it's taken a collective effort among the different developers doing work up there to take on these projects, and have a vision about what Niagara Street can become."

William Breeser also saw a future for the street: He bought his first of eight buildings nearly 20 years ago. Today, Breeser owns all but one of the buildings on both sides of the block between Auburn Avenue and Breckenridge Street. Those properties include 1250 Niagara St., where the popular Resurgence Brewing Company, which opened in 2014, is located.

"I'm finally in the right place at the right time," Breeser said.

The future for a walkable neighborhood is bright, he said.

"Five years from now, I would expect most of the buildings that are existing will have been redeveloped, and there will be significant infill projects, like the one with Tim Hortons," Breeser said, referring to an Ellicott Development project at Niagara and Albany streets that includes three apartments.

It also remains to be seen what happens with five buildings that were sold by Rich Products several years ago across from the company's headquarters just south of West Ferry Street and are now vacant.

"There's a thrilling domino effect of seeing one vacant building after the next getting properly renovated," Kavanaugh said.

In the past, he has imagined the building being a brewery, rooftop cafe and bar and "an epic post-industrial concert hall."

Kavanagh said he is now close to developing the property.

"I realize the responsibility I have of being one of the owners of one of Buffalo's most interesting industrial cathedrals," Kavanagh said. "I'm also intent on not letting it sit for much longer. There will be some decisions going into 2018 for sure."