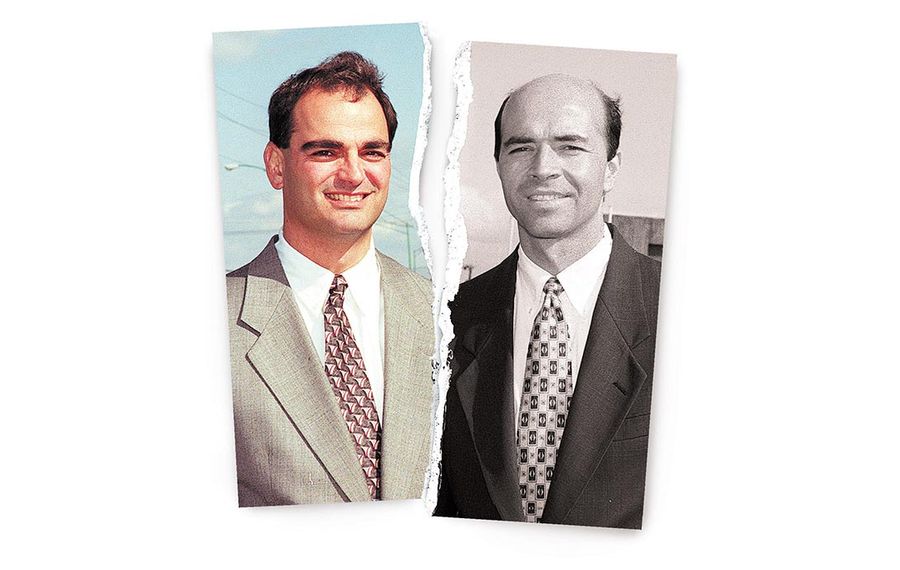 Fifteen years later, Mark and Judy Rappold look back on their hills-and-valleys relationship with Ross M. Cellino and admit that, yeah, they still like the guy.

Even now, more than a decade after the West Seneca couple accused Cellino of misconduct, they remember the lawyer who also won them a record-setting $47 million jury verdict.

"Ross is not a phony," Mark Rappold said last week. "He's a good man and, one on one, he's a real nice guy. He also did a lot of good things for my son."

In a career that made Cellino both wealthy and famous, the Rappolds and their son, David, a law student left brain-injured after a road-rage incident on the Thruway, make up an important chapter.

Their case, after all, helped catapult Cellino and partner Stephen E. Barnes into the public spotlight and earn them a reputation as aggressive attorneys willing to go to trial on behalf of injured clients.

It also was the Rappolds who gave the Cellino & Barnes firm one of its first public black eyes.

"They pulled a lot of crap, and I did what I had to do," said Mark Rappold. "But in the end, I don't know anyone who could have done a better job."

Barnes: The hard-charging Marine in the firm

Like so many others here and across the country, the Rappolds are watching the latest Cellino and Barnes drama – Cellino's lawsuit seeking to dissolve the firm.

In an interview, Cellino talked about his relationship with Barnes and why, after decades together, he wants to split and go out on his own.

"There are fundamental disagreements in how we manage the firm and how we practice law," he said, "but that doesn't diminish the fact that we built something significant. I'm very proud of what we've accomplished."

For the Rappolds, the dispute is a vivid reminder of the contrasts they saw in their two lawyers and why, despite differences with the firm, they came away with a never-ending respect for Cellino.

Rappold still talks about the "brother figure" he came to admire, the good cop in a relationship that often made Barnes the bad one.

Right or wrong, it's a reputation echoed by many in the legal community.

In the close-knit but highly competitive community that defines Buffalo’s personal injury lawyers, Cellino is viewed as the warm and fuzzy side of Cellino & Barnes.

It's a characterization some suggest is off-base, even unfair, to Barnes. They claim Barnes’ image suffers because of his leadership role in running the day-to-day operations of a firm that employs 80 lawyers with offices in 11 cities.

In short, Barnes is the guy who makes the tough decisions that make enemies, they say.

While their faces and phone number are recognizable to almost everyone in Western New York, little is known about the two men behind the “Don’t wait. Call 8” marketing slogan.

For Cellino, it’s the story of a West Seneca kid, one of nine children, who went from working at Tops and UPS, and owning his first house at the age of 18, to building one of the most successful personal injury firms in the nation.

“Even now, he’s the same person I grew up with,” said John Bonitati, a friend since high school. “Some people, as they grow and become successful, forget about their friends. That’s not Ross.”

Bonitati said the Cellino he knows worked for everything he achieved and, despite immense success, is still as down to earth and genuine as he was 45 years ago.

“He’s a stand up guy who will have your back,” he said.

When you read the court papers and talk to Cellino, you come away wondering if his breakup with Barnes is really about his own legacy.

It's no secret the firm's reputation for "stealing" clients is one of issues that divided the two men, and Cellino acknowledges it happened.

"There's nothing illegal about it," he said. "It happens all the time at other firms. It's just not the way I want to do business."

Among fellow attorneys, including those with an intense, never-ending dislike of the firm, Cellino is seen as the approachable and personable partner.

But even those who like him struggle with two aspects of his meteoric climb – the firm’s practice of taking other lawyers' clients and his 2005 suspension from practicing law.

Disciplined by the Appellate Division of State Supreme Court, Cellino was accused of advancing money to clients, a forbidden practice among lawyers. He was barred for six months and eventually reinstated.

Barnes, who also was cited in the complaints brought by clients, was censured by the judges.

"They got it wrong," Cellino said of the court. "My conscience is clear that I didn't violate any ethical rules."

The firm survived Cellino's suspension and, armed with the billboard, radio and TV advertising that fueled its initial growth, quickly regained its stature in Buffalo's legal community.

More than anything, it's the firm's intense marketing that made Cellino and Barnes more recognizable than most of the Buffalo Bills and Sabres.

Cellino said it started with a "business card ad" in the yellow pages and mushroomed into a multimedia strategy and, of course, the trademark "Dial 8" slogan.

Even now, he remembers that first billboard and his kids' embarrassment at seeing their father's face looking down on Buffalo. When one of his daughter's friends asked if that was indeed her father up there, she said, "No, that's my uncle."

"She denied me," Cellino said with a big smile.

At last count, the Cellino family was on its fourth generation of lawyers. Cellino’s great-uncle was a lawyer and his father, Ross Cellino Sr., started the firm that became Cellino & Barnes. Now 84 and retired, his father is still widely remembered and respected.

The family legal tree also includes four of Cellino's six children. Two of his kids are practicing attorneys in Buffalo, and two others are either in law school or waiting to take the bar exam.

Anna Marie Cellino, Cellino's wife, is also an attorney and a former president of National Fuel Gas Distribution Corp. Until her retirement in 2015, she was viewed as one region's most influential business leaders.

Family ties run deep in the Cellino family, and there's a school of thought that the firm's divorce may be rooted in Cellino's desire to go out on his own and practice law with one of his kids, just as he did with his father.

In his court petition seeking an end to the firm, Cellino points to a disagreement with Barnes over hiring practices, including those involving "family and personal relationships."

Dave Marquart, a friend since 1981 when he and Cellino were neighbors on Highgate Avenue in Buffalo, watched the Cellino kids grow up and, now, years later, sees the same type of close father-child relationship that Cellino had with his father.

"Ross would do anything for his family," said Marquart, a retired mechanic.

When you talk to people like Marquart, people who know Cellino well, chances are good you'll hear about the understated side of their friend.

"He doesn't talk or act like some fancy lawyer," Marquart said. "He's just a normal Joe."

At his alma mater, the University at Buffalo Law School, Cellino is a major booster who, with fellow alumnus Barnes, donated $1 million to the school in 2009. The law school subsequently named its conference center after the two lawyers.

“No airs about him," Ilene R. Fleischmann, the law school's vice dean for alumni, said of Cellino. "You would never know how successful he is. He's always down to earth.”

Cellino's wife admits to being a bit taken aback by her husband's celebrity and made it clear he didn't come to it easily. She talked about that first house on Highgate and the struggles they had as a young family trying to make ends meet.

"There was no kitchen," Anna Marie Cellino said. "There was a huge oil stain in the living room, and I had to do dishes in the bathtub."

When the family got too big, Cellino moved them to their current home on Orchard Park Road in West Seneca, just a stone's throw away from his father and mother, Jeanette, the other major influence in his life, and the home he grew up in.

Now, years later, the Cellinos are adding a lakefront "vacation home" to the mix. They recently built a three-bedroom home with an adjoining two-bedroom cottage on Old Lakeshore Road in Lake View.

Even as a young lawyer, Cellino's business interests extended beyond the law firm and today, those interests include a tree farm in Eden – his wife calls him a tree hugger at heart – and an 18-hole public golf course in Orchard Park. 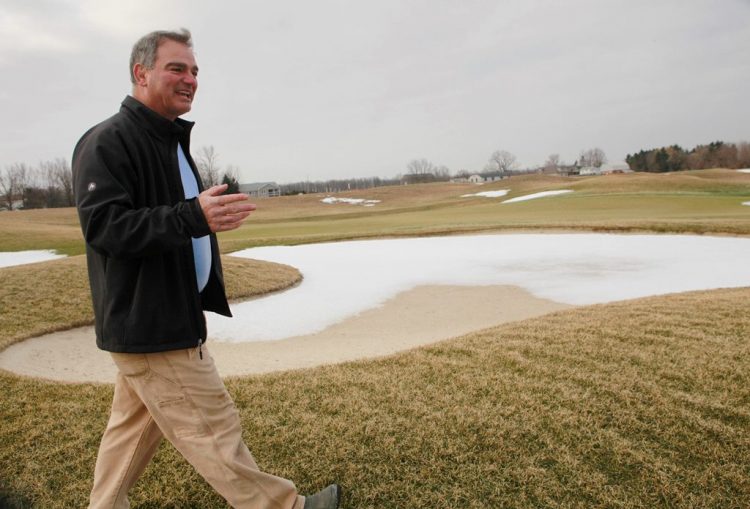 Cellino bought Harvest Hill County Club in 2012, about five years after it opened, and added a clubhouse, restaurant and patio at the 18th green.

He said his goal was to provide country club quality at public course rates.

Of course, it's not golf or real estate that gave Cellino his wealth and celebrity and, even now, it's his ties to Buffalo's most visible law firm that generates the public spotlight he finds himself in.

Former client Ron Stark said Cellino's success can be traced to a genuine desire to help people and he will tell you that Cellino was the only lawyer, including Barnes, willing to take his case.

Seriously injured in a car accident in Cattaraugus County in 2012, Stark eventually settled for $1.1 million.

"Ross said I had a case, Ross took the case and Ross won the case," he said of his lawyer.

After the settlement, Stark moved from Olean to Florida, but the two men stayed in touch and became good friends, he said.

Like Starks, the Rappolds admire Cellino, but it wasn't always that way.

Shortly after their son's case settled, they filed a complaint with a state agency accusing Cellino and Barnes of over billing them to the tune of $300,000 in legal fees.

Rappold wouldn't talk about his differences with the firm, but acknowledged he came away from their legal battle with contrasting views of the two attorneys.

Not surprisingly, he is watching the firm's pending breakup with great interest.

"There are two sides to Ross," he said, "But I really think he would be better off without Steve."