No artichokes. No liver. No eggplant.

The four restaurants I was assigned as a rookie Taste of Buffalo judge seemed to have dishes I could stomach.

I've never been much of a veggie fan, but since I became the WNY Refresh editor at The Buffalo News a little more than four years ago, I knew I should embrace better eating if I was going to write about health, fitness, nutrition and family life in the region.

But even a healthy eater has limits.

Erin Collins, one of the helpers with the Taste – which continues from 11 a.m. to 7 p.m. Sunday in and around Niagara Square – told me in advance that if I really didn't like a certain food, I could swap out one of my four restaurants.

Fairness counts when it comes to such a task, after all.

I sought advice from veterans, and felt a bit more confident going in.

Mayor Byron W. Brown, who's judged a dozen contests, told me some of the owners of the nearly 60 restaurants and food trucks have been known to ladle on more food, sauces, and even sing a song as a way to gain influence.

Buffalo News Food Editor Andrew Galarneau advised taking only one or two nibbles of each dish I would judge – 19 in all – or I'd be too full to best assess the last couple of stops.

"You should have brought somebody. You'll never be able to eat that much food," WIVB-TV Channel 4 anchor Jacquie Walker told me when I reached the judge's staging area on Saturday morning. Her husband, Mike Beato, was ready to join her.

I couldn't convince anyone in my family to do so at 11 a.m. My youngest daughter, 24, and her boyfriend are vegan. My oldest daughter, 26, has limited tastes and wouldn't dream of getting out of bed before noon on a Saturday. My fiancée? She's one of the healthiest eaters I know and always has been cool to a food festival in the city that birthed the beef on weck and chicken wing, and for my money has the best pizza in the world.

Worse, I pitched a story to my editor about finding healthy fare at this year's festival, and the GetFried Fry Café was one of the choices on my list. 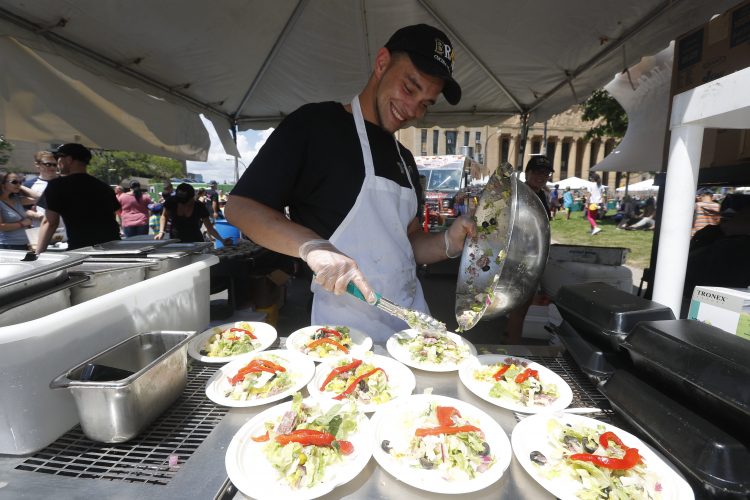 I had to be fair. I also knew that each vendor would be required to serve at least one option low in calories, fat and added sugars – an idea first recommended by the Independent Health Foundation's Healthy Options program 11 years ago.

Brenda Alesii, a city radio personality and another veteran judge, advised me when I got there that I should survey the entire festival grounds before I put one forkful into my mouth. It would help me choose a fifth restaurant – of my choice – that I also would be asked to judge.

"Pace yourself and start slowly," she said.

I took her advice and passed by Cecila's Ristorante as I set out for Bravo! Cucina Italiana, Anderson's Ice Cream and the Fry Café, which all set up in Niagara Square.

Along the way, I passed Louie's Hot Dogs, Paula's Donuts and Fat Bob's Smokehouse, and understood that my job could have been much more difficult. I said hello to Susan Gramlich of Williamsville, her daughters Kelsey, 21, Kerry, 16 and Kelsey's boyfriend, Greg Musilli. They split the three offerings at Crunch Roll Factory, which had the longest lines on the Delaware Avenue block, and offered crunch rolled chicken, banana peppers and a healthy "power crunch" option that fit the bill for mom. It had shredded zucchini, carrots and sprouts tucked into a light spring roll.

"It was delicious. I was excited to see that the Taste of Buffalo is focused on a healthy option," Susan Gramlich said as she stood at a table with her kids. "These guys don't care."

At least I wasn't alone.

Bravo!, a staple in the Walden Galleria mall, came first. I took a spoonful of the lobster bisque – hardly healthy fare – and wanted to eat the whole thing! I stopped after a half-dozen spoonfuls. I was able to more easily refrain from extras of the Chicken Diavlo and crème brulee. The Antipasto Salad, designated by a circular orange Healthy Options logo, was the last dish I tried. I had several bites and gave it a 7 out of 10, one point less than the bisque.

I asked Bravo! executive chef Jordan Wilson how satisfied someone could be if they stuck to only the healthy options. He wasn't entirely optimistic.

Alesii saw me as I walked away and pointed to Stackburger and one of the winners from last year, a fried PB&J sandwich.

"It comes with a defibrillator on the side," she cracked. 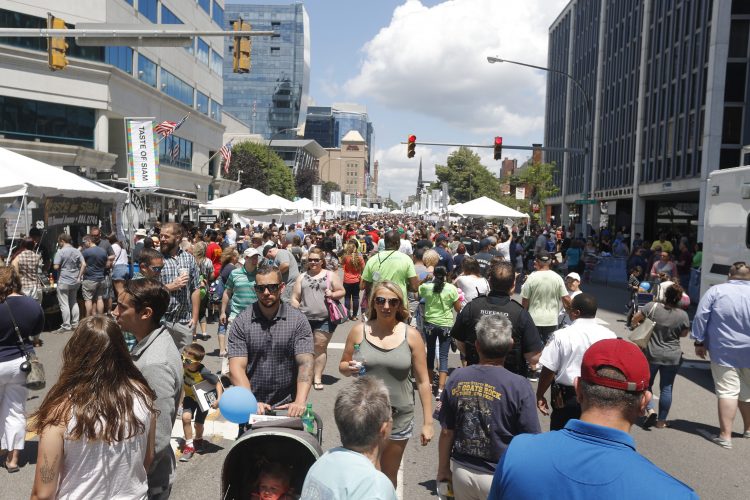 The crowd thickened as the Taste of Buffalo pushed into Saturday afternoon. (John Hickey/Buffalo News)

On the way to my next stop, Anderson's, I said hello to Nancy Mangano, owner of Vin-Chet Gluten-Free Bakery in Amherst. The Independent Health Foundation is serious about the limits on calories, fat and added sugars in the healthy options, she said. Organizers made the bakery tone down some of the ingredients in their healthy option, Gluten-free granola.

To my surprise, the no-fat, no sugar added black raspberry ice cream was the top seller during the first hour of the Taste, said Lisa Sorrentino, the company's promotion and marketing director.

I liked it, too, and gave it an 8. Sponge candy and the Moose Tracks ice cream helped the homemade ice cream category score a perfect 10. I was weak, but fair.

I saw Daniel Du and Vanessa Wang, recent University at Buffalo graduates, enjoy the black raspberry ice cream. It turned out they, too, were on the lookout for healthy dishes.

"It's really hard with all the barbecue and crispy chicken stuff," Du said.

Wang recommended India Gate for healthy fare. I decided it would be my judge's choice. 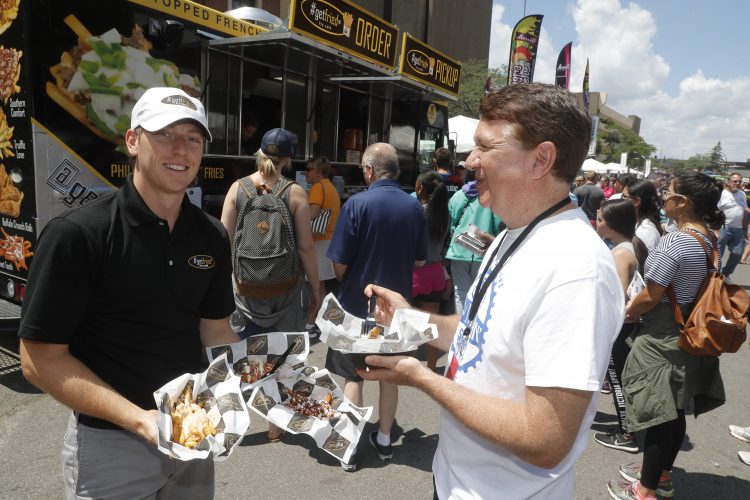 WNY Refresh Editor Scott Scanlon, right, suspected Chris Covelli and his Get Fried Fry Café would be one of his toughest judge's challenges. (John Hickey/Buffalo News)

Buoyed by the surprise of a great-tasting healthy option at Anderson's, I steeled myself to bring all my objectivity to what I expected would be the hardest part of this rookie assignment.

Get Fried Fry Café? This is the kind of place I've discouraged readers from patronizing for the last four years. In the Mighty Taco, Santora's Pizza and Louie's Hot Dog days of my 20s, I could eat this kind of grub till 4 in the morning without paying a price. In my 50s? Touch it before bedtime and I'm reaching for the Prilosec.

"Whether you're the healthiest person in the world or somebody who really enjoys comfort food, there's always room for comfort food," said owner Chris Covelli, 30, who started the business a couple of years ago at the Fashion Outlets of Niagara Falls and launched his food truck last year.

He should know. He works out four days a week, eats chicken breasts, broccoli and rice most weekdays, and saves his weekends for the kind of stuff he sells.

He offered me a bit extra of his signature dish – the 716 Buffalo chicken wing fries – which looked as decadent as they tasted.

"No small portions," Covelli told his crew as they made my dishes. Mayor Brown was right. He'd urged me to be strong, and not play favorites. He said he doesn't do so even when it comes to city versus suburban restaurants.

I grew up in Buffalo for crying out loud. How could this not get a 10?

Again, I learned I am not alone. Covelli has sold franchise opportunities in New York City, California, Texas and Egypt. Sounds like a lack of self-restraint is a worldwide phenomenon. 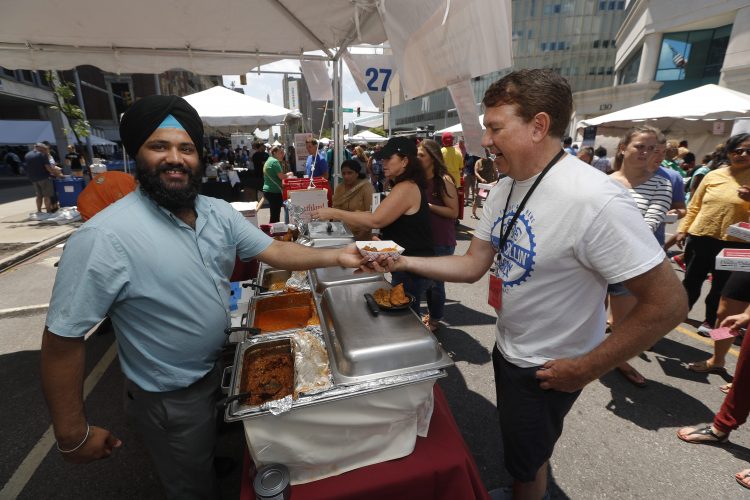 I now was determined now to enjoy my last two stops: Cecilia's and India Gate.

The line was long at Cecilia's, a popular Elmwood Village eatery. Staff dished out fried ravioli, gnocchi, and a dish I've been waiting to try since I spotted it on the judge's sheet: beet arugula salad with goat cheese and citrus vinaigrette.

My fiancée and youngest daughter have spent my Refresh years encouraging me to eat more fruits and vegetables. I have heeded their calls, and have learned to like many, including asparagus, spinach and Brussels sprouts. It appears I have company. Owner Dave Barbara told me the salad was his No. 2 seller on Saturday afternoon – after the fried ravioli. That's good for a healthy option.

I had to get back to the judge's staging area soon, so I scrambled to India Gate. I asked for small portions. Owner Jaspal Bath obliged, and I found his dishes all generally on the healthy side. One in particular was tremendous: the Baingan Bhartha.

It had all the elements in what I've been asked to consider for my choice of best in show. It was flavorful, creative and satisfying.

I'm glad my fiancée didn't hear this. It saved me an in-person, "I told you so."

I ended with a feeling of accomplishment. I hadn't sampled the three winning healthy options – watermelon sorbet from White Rabbit Frozen Yogurt, watermelon gazpacho from Savor in Niagara Falls, and Fresh Fruit Sorbet from Sweet Melody's – but I gave three 10s to a variety of dishes, including a healthy option.

I even was told by organizers that this year's judges favored the healthy options in a stronger way than they had in past years and that one, Chrusciki Bakery's healthy option, Lemony Coconut Bar, won best overall dessert.

"Healthy options are appreciated, especially since they're lighter and often easier to stomach than the forest of fried foods you're surrounded by," fellow rookie judge, Buffalo News colleague and Buffalo.com webmaster Ben Tsujimoto told me. "Out of principle, though, people shouldn't choose the 'fresh orange' from Paula's Donuts."

I'd limited my food intake, did my best to be fair, and walked quite a distance in the process – which made me glad I saw Joe Florczak along my judging journey.

He runs the Homemade Beer Stand at the Taste of Buffalo and asked me to stop by after I finished this story.

"With all the steps you took today," he said, "you can add a few calories here."

I did say I'm from Buffalo, right?

More than 60 judges – including a half-dozen from The Buffalo News – sampled dishes from nearly
60 restaurants, food trucks and wineries Saturday. These are the winners:

Hometown Hero Award: New York Beer Project won this new award introduced this year for their mac and pork sandwich. The Taste of Buffalo partnered with Western New York Heroes to choose a local veteran family, who selected the winner of this inaugural award.