Our ships have come in.

The USS The Sullivans, the USS Little Rock and whimsically christened USS Croaker have been watching over Western New York since Independence Day 1979. These warships, the cornerstone of the Buffalo and Erie County Naval and Military Park, led the resurgence of Buffalo's waterfront.

"The anchor tenant," quipped Terry McGuire, who is on the park's board.

The ships, though decommissioned, are still the property of the Navy. Once a year, the Navy inspects them. They may be hulking and ungainly, but they have a peculiar romance.

"Sometimes a gentleman will come in, shuffling, with a walker," reflected John Branning, the retired Navy senior chief petty officer who now serves as the park's Superintendent of Ships. "They get on board the ship and have a moment. They have a steel deck under their feet for the first time in forever. They're not seeing you. They're seeing 1945.

"'Where are you, man?'" His voice dropped. "They're in the South Pacific."

Even those of us who have never felt a steel deck under our feet can find it fascinating to visit the ships. Two of us from The News, dropping in on a random Friday morning, immediately saw action.

Gerald Langgood of North Tonawanda was donating a model of the USS Edsall, sunk during World War II. The naval park gets many donations, Branning said, and is delighted by them. 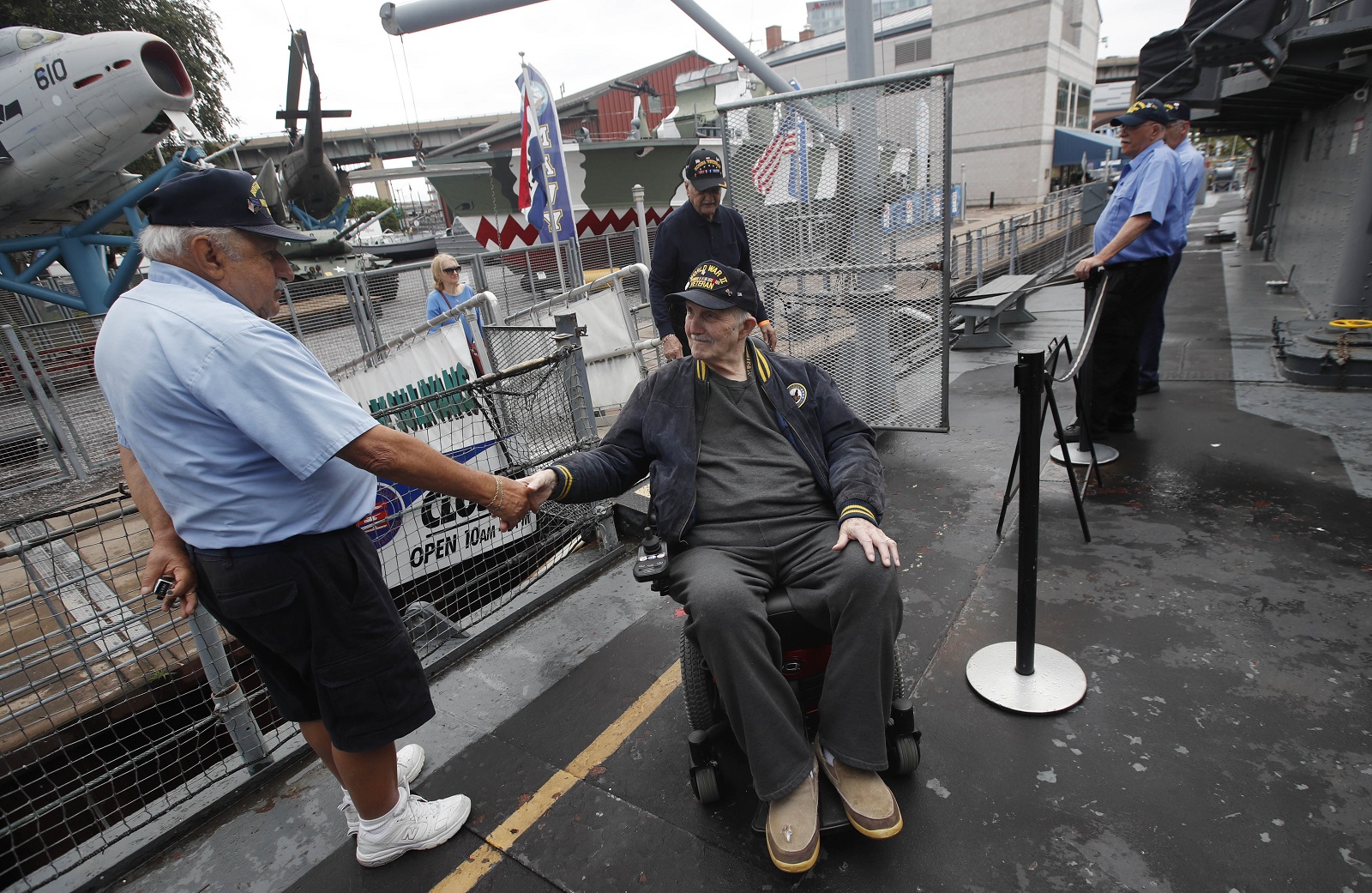 We learned that Langgood, 90 and in a wheelchair, was the grandson of Gerhard Lang, the famous Buffalo brewer and friend of Grover Cleveland. At 15, he had lied about his age so he could join the Navy. When the Japanese attacked Pearl Harbor, he was there on the USS Shaw, one of the ships that was hit.

He was here not just to donate his model ship, but to revisit the past.

"You forget these ships were home to these people, for three years," McGuire said.

Other visitors also arrived in a steady stream – veterans and non-veterans, from in town and out of town. There is no waiting for a tour group. The tours are self-guided and linear. You follow the yellow arrows to The Sullivans, then on to the Little Rock and, finally, the Croaker. You go at your own pace. "Don't Touch" signs don't exist. 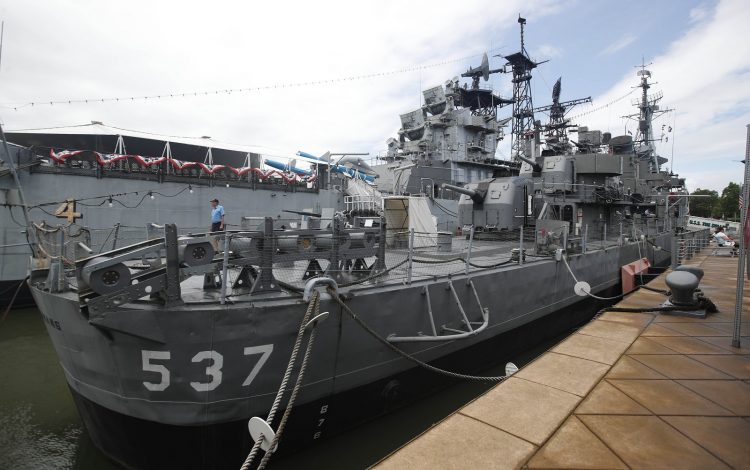 The USS The Sullivans is a destroyer named in memory of the five Sullivan brothers who lost their lives during the Battle of the Solomon Islands in WWII in the USS Juneau. (Sharon Cantillon/Buffalo News)

There are so many things to look at that you could easily spend hours on board.

"It was way more than I expected," said Mark Griep of Minneapolis, Minn. He toured the ships with his wife, Michelle, who is working on a historical novel. "It was like going through Ikea."

The ships have known sorrow. The Sullivans was named for a family that lost five sons, all on the same ship. But the vessels tell a colorful story, full of triumph and that colorful American sense of humor.

The Little Rock has a tip of blue because it crossed the Arctic Circle, making it part of the "blue nose" club. Welding below the blue nose dates from the time it ran into a Greek submarine. Branning said that when the ship sailed the Mediterranean, Princess Grace of Monaco, nostalgic for her homeland, would hold parties on the deck. 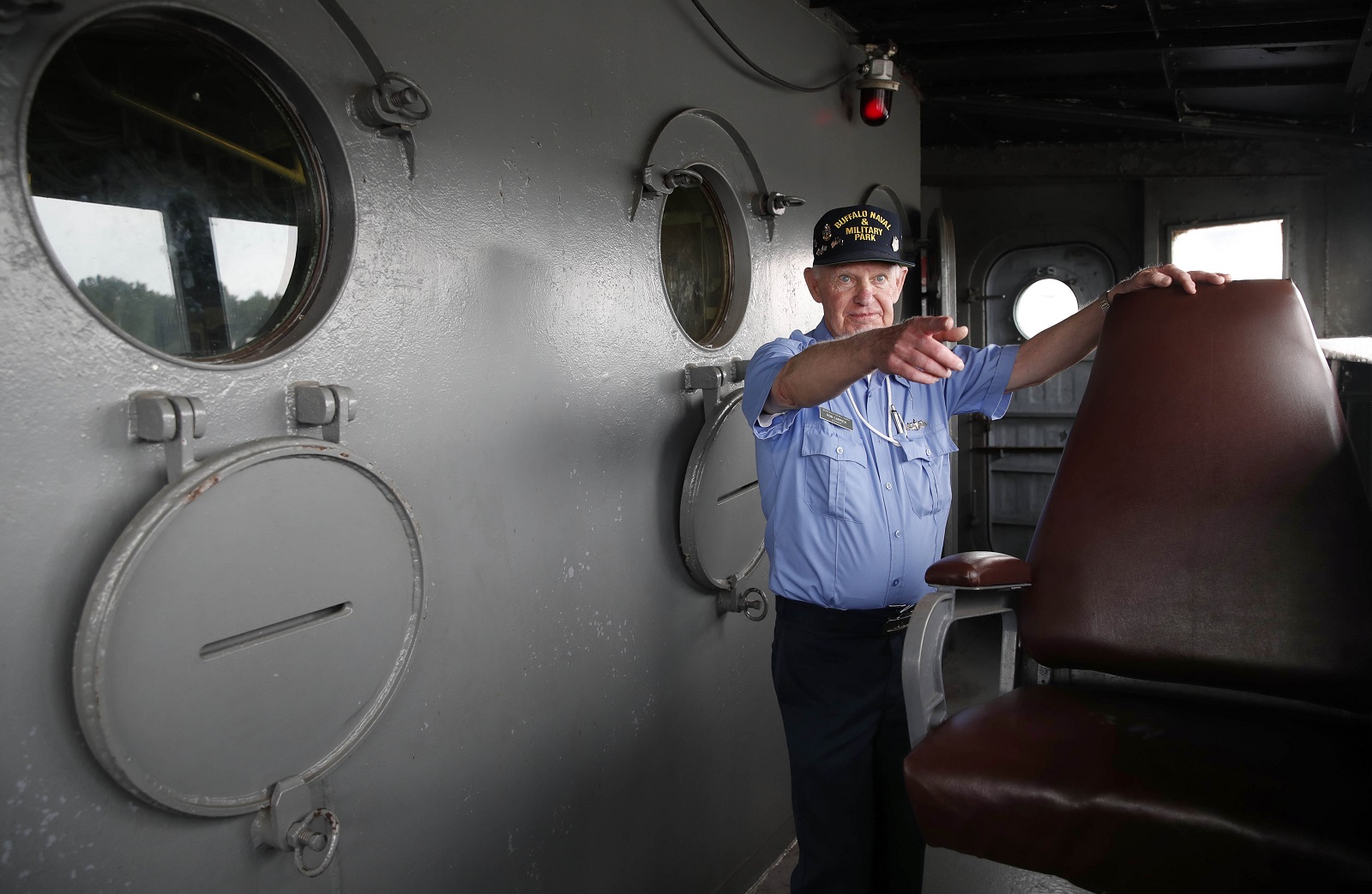 Navy vet and Naval Park docent Ron Carrick shows the captain's chair, which provides a great view of what was ahead. He said that on one could sit in that chair. (Sharon Cantillon/Buffalo News)

Could you fire up the big cruiser, make it go? No. You can, however, pretend you're steering it, by giving its huge wheel a whirl. And the ship is not cemented in place. It floats.

"The ship moves, make no mistake," Branning said. "Back, forth, up, down."

Of the three vessels, only the submarine wittily christened the Croaker is still armed and ready for a fight.

Submarines were named after sea creatures, real and imaginary. The croaker fish makes a throbbing sound a lot like the sub itself. The feisty Croaker's prowess defies its humble name. She sank 11 Japanese freighters. Two photos show one of them, the Nagara. The pictures are captioned: "Nagara before ... and after meeting Croaker." 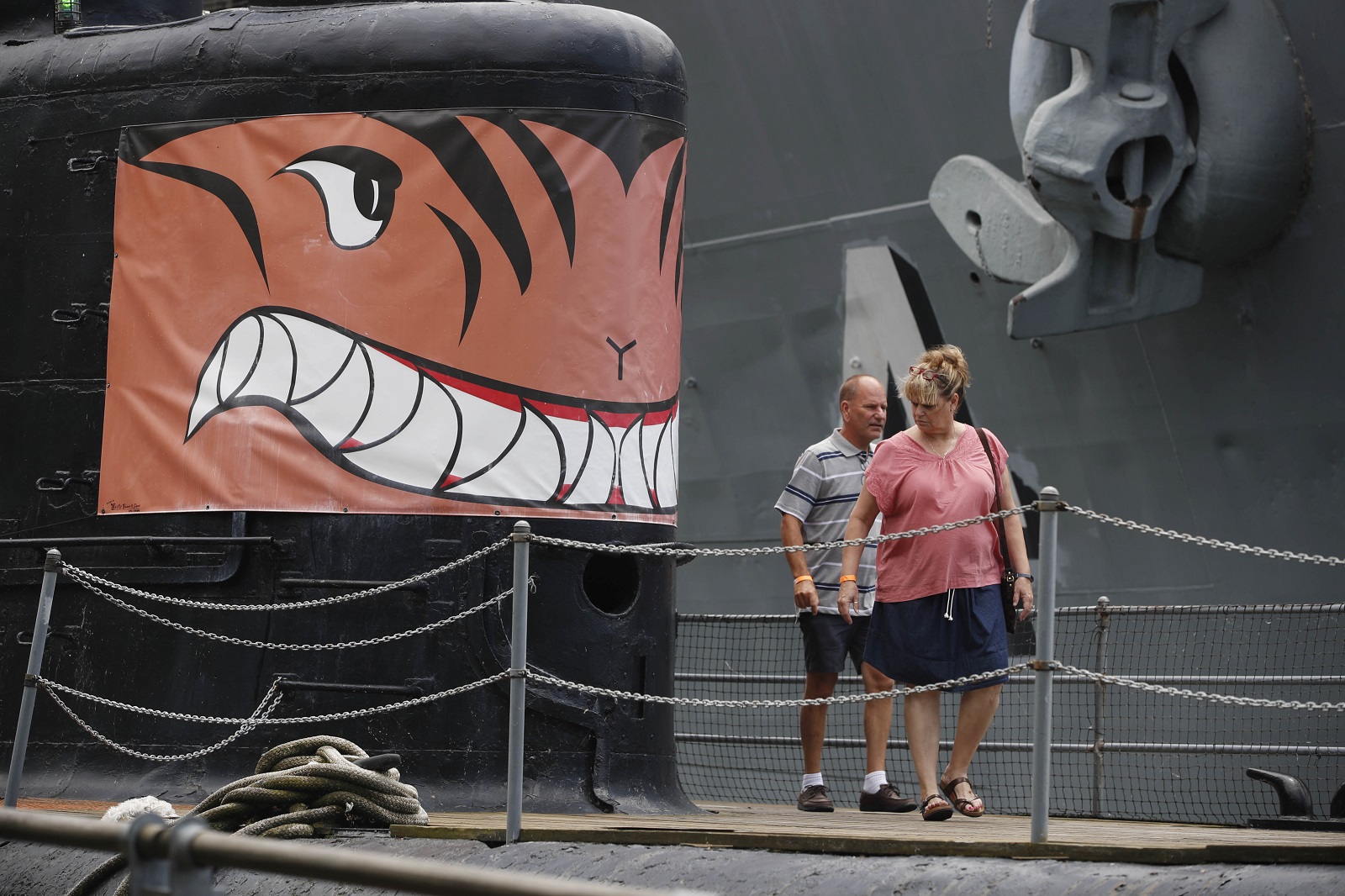 The USS Croaker was named after various species of fish that make throbbing or drumming noises. It was sent to the Pacific to wage war against Japan's Merchant Marines and Navy in WWII. (Sharon Cantillon/Buffalo News)

Kids love the sub because you crawl through small holes while listening to recordings of the roar of the sea. Grown-ups, too, are filled with wonder. What would it have been like, deep underwater in these stifling quarters? Crazy objects cry out for your attention. A sound-powered telephone. Rows of switches from pre-computer days. A torpedo painted by some sailor with a toothy grin. The Croaker's torpedoes are real and could be fired.

Imagine living several years at sea, on one of these ships.

No wonder a veteran never forgets. You could tell that watching Langgood, the Pearl Harbor veteran, approaching The Sullivans. Confronting the ship, the nonagenarian squared his shoulders.

"Permission to come aboard, sir," he said to the docent, another Navy man.

They saluted. Time stood still. It was one of those moments Branning had been talking about.

They linger long after you get your land legs back. 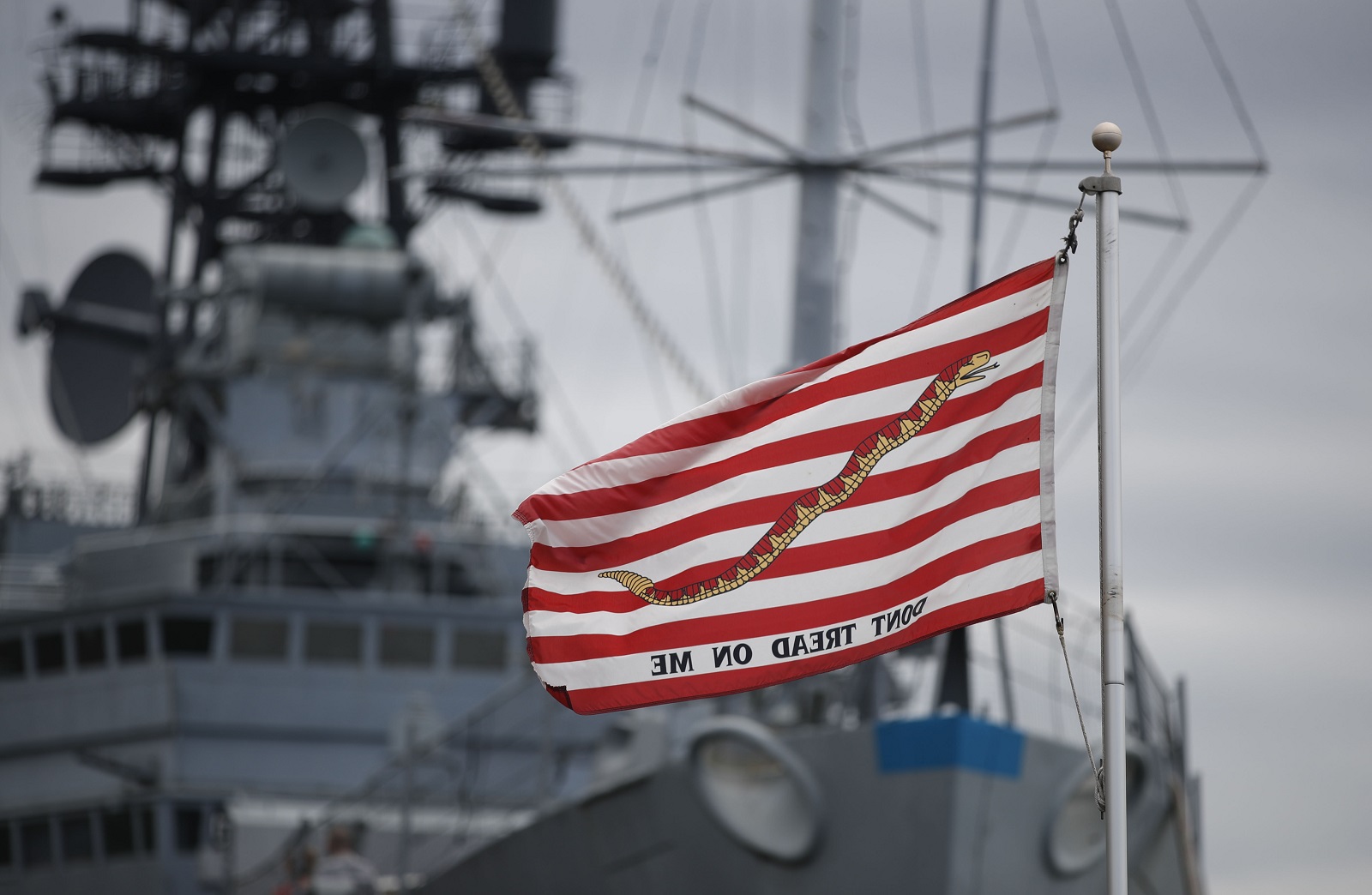 The "Don't Tread On Me Flag" flies on the submarine. (Sharon Cantillon/Buffalo News)