An elaborate Medina sandstone church on Delaware Avenue that has housed the same Baptist congregation since it was built in 1894 is for sale for $895,000.

But not because the congregation is shrinking.

Unlike other churches that have sold property, the congregation of Delaware Avenue Baptist Church is growing, with more than 250 people. That's still not enough, however, to justify the upkeep of such a large building, and the physical layout of the 27,831-square-foot church is not conducive to meet their needs, said the Rev. Michael J. Robinson, the pastor.

The property – slightly more than a half acre – also lacks enough parking to support the congregation's growth.

"It's a heavy lift, when you get into the upkeep, the utilities, the insurance. It's a lot of waste," Robinson said. "We don't even use all of the space, because we don't have those types of numbers of people. So instead of paying for a building that we only use half the square footage, let's get something more energy efficient and with greater parking potential for us."

Robinson said the church used to own much more land behind the Delaware Avenue church, but the construction and later sale of Baptist Manor decades ago took that away. 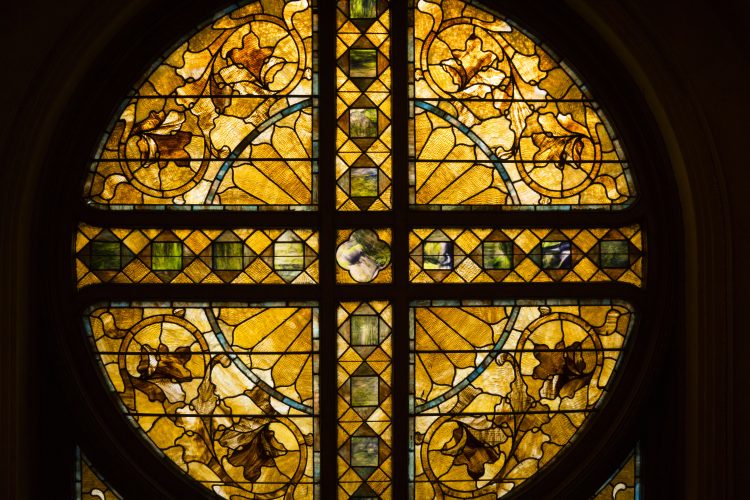 The building, at 965 Delaware Ave. near Bryant Street, requires "some significant repairs that have to be done," said Hunt Commercial Real Estate broker Steve Fitzmaurice, who listed the property along with Clarke Thrasher.

Designed by architect and church member John H. Coxhead in the Richardsonian Romanesque style, the church features a stained-glass dome atop a 6,500-square-foot vaulted sanctuary with mosaic-tile detailing inside and twin steepled towers on either side of its peaked stone-arch entry.

"It's just a wonderful facility," said Paul McDonnell, chairman of the city's Preservation Board. "We're sad that the congregation feels the church is beyond their long-term financial wherewithal. It's really a very special building."

But "even though they think they won't be able to stay there long-term, they are concerned about leaving the building in good shape for the next owner," McDonnell added.

The historic structure is already the subject of a preservation effort. The Delaware Avenue Restoration Corp., a nonprofit formed by and affiliated with the church, is trying to raise $300,000 to $500,000 to fix the building and ensure its long-term survival. The group is working with HHL Architects and plans to make selective repairs along the way. 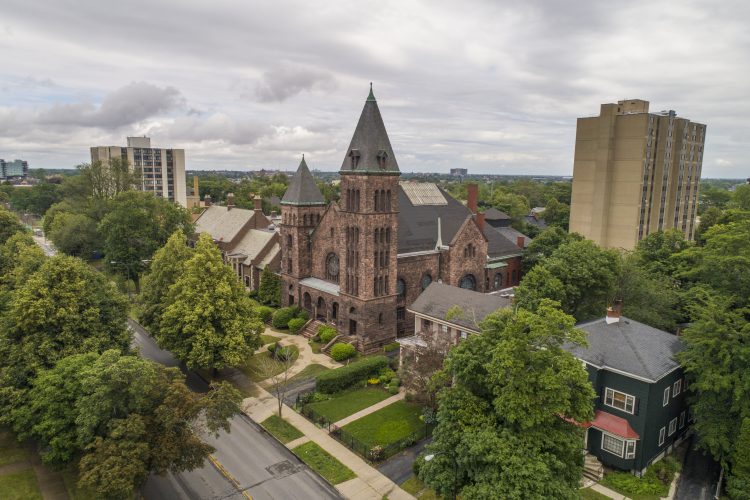 Its first target is the leaky roof, much of which is original to the building.

"It's well over 100 years old now, and there are places where it's deteriorated to the point where it needs replacing," said McDonnell, who is a member of the Restoration Corp. board.

The nonprofit has secured a $75,000 matching challenge grant from the New York Landmarks Conservancy's Sacred Sites program. But that's restricted to places of worship, McDonnell noted, so if the building were acquired by a developer and converted to apartments, condominiums or anything else, it would no longer be eligible for the grant. "That could be an issue that would have to be explored," he said.

McDonnell noted that any redevelopment that relies on historic tax credits would be prevented from altering the sanctuary, which is "the defining element." But there are plenty of other opportunities in the rest of the facility, he said.

Already considered a local landmark, the church is located in the Linwood Avenue Historic Preservation District, just north of the Delaware Avenue Historic District, and it was recently recommended by the governor for inclusion on the state and federal Registers of Historic Places. Such a designation would mean renovation or redevelopment may also qualify for state and federal historic tax credits of up to 40 percent of the cost.

Meanwhile, Robinson said the church has started looking for a new and smaller location in the city, ideally within a mile of Delaware Avenue so it can keep a name that "has significance and history."

The building includes three floors of meeting, classroom and office space, including a 700-square-foot kitchen, a library, a fellowship hall and a lounge. The sanctuary includes extensive lower-level seating in old wood pews, as well as a vast balcony with an organ.

"We don't need 30,000 square feet of space. We're not looking to have a mega-church. Half of that has proved to be adequate," he said. "We're just looking for a building of that size, so that we're not paying for more than we're using."