Michael Lesakowski Sr. made sure the real inspiration for Monday's monumental hockey feat had a presence in the stands. He wore a shirt to Buffalo's HarborCenter that carried an image of his wife, Evelyn. Michael Sr. was there to watch a group of primarily everyday guys establish a still-unofficial world record by finishing off a game of hockey played for 11 days, without stopping, while locked inside an arena.

"She would have been here," said Michael Sr. of Evelyn, "or maybe she is."

Certainly, his wife was intertwined with the triumphant finale of what they called the 11 Day Power Play, in which grown men shed tears and embraced and banged their sticks against the glass. Mike Lesakowski Jr., for his part, skated through the last moments of what's expected to be certified as history's longest hockey game wearing a wide, disbelieving grin.

His father is Michael Sr., whose love affair with Evelyn began when they were children and her parents ran Eddie's and Carrie's, a legendary East Side restaurant. They grew up and got married. Evelyn was always in the bleachers, a quiet and reassuring presence, when Mike Jr., played hockey as a boy – a career that continued at SUNY Fredonia.

Mike Jr. admired his mother's grace and selflessness. "She and my dad would always go out of their way for someone else," Mike Jr. said. He vividly recalls Evelyn's kindness to an uncle, stricken with leukemia. She made sure, on his worst days, his uncle always had a visitor.

That example sparked a dream for Mike Jr. He began contemplating it years ago, as his wife, Amy, recovered from breast cancer during treatment at Roswell Park Cancer Institute:

He wanted to raise money for Roswell by assembling a group of friends to set a new Guinness world record, in Buffalo, for the longest hockey game every played. Ordinary matters kept getting in the way until four years ago, when Evelyn – at 59 – learned she had brain cancer. Last year, the disease claimed her life.

A day or two after her funeral, Mike Jr. told Amy:

"We're going to set this record." 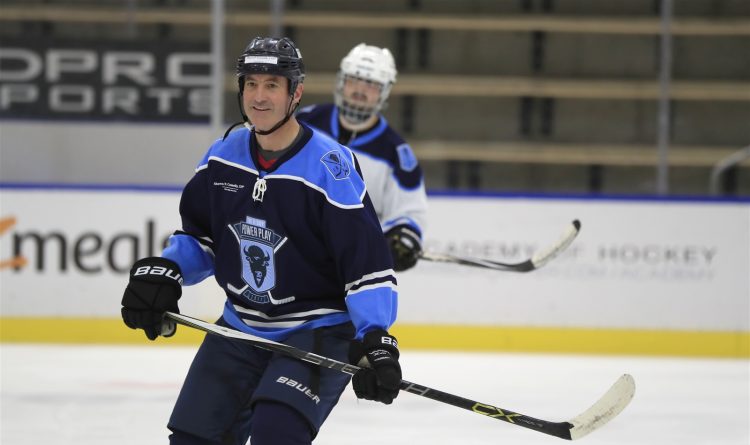 Mike Lesakowski Jr., who led the successful pursuit of the longest hockey game ever, in Buffalo. (Harry Scull Jr./Buffalo News)

They approached the 11 Day Power Play as a couple, and they got it done. The record fell Monday, at least informally. A blue team beat a white team in a Buffalo hockey game with a pinball score, 1,725 to 1,697, in a game that lasted for dozens upon dozens of four-hour sessions. At about 7:03 a.m., hundreds of spectators rose and roared as the players skated past the old record of 250 hours, 3 minutes and 20 seconds, set in 2015 by players in Alberta, Canada.

Hockey, however, was only the backdrop. The deeper theme was epitomized by Kim Conrad, a volunteer statistician and record-keeper, whose documents will play a key role in gaining official certification from Guinness. She is a breast cancer survivor. Eight years ago, she learned her cancer was classified as stage four, already spreading from organ to organ.

At Roswell, her hopes soared past her own dire expectations. The doctors there treated her and taught her how to live with cancer, which she described as both a philosophy and a medical strategy. Monday, she worked side by side with scorer Tom Harris, whose job was keeping up with thousands of goals.

Conrad, who as neighbor became a close friend of Amy Lesakowski, recalled how she told Amy that Roswell would be a superb place for treatment.

"What they've accomplished here is a miracle," Conrad said, referring to how 40 players – including many in their 40s and 50s – raised more than $1.2 million for Roswell.

It that's a high-profile miracle, it's built on such quiet ones as the tale of Peter Merlo, a civil engineer with the City of Buffalo. Before the media spotlight of the past 11 days, few of those who played pickup hockey with Merlo knew his larger story. More than a decade ago, he endured shattering headaches. He thought they involved an inner-ear problem.

The cause was a tumor in the back of his skull. "I had a wife and two kids," he said, "and I thought I was going to die."

At Roswell, they removed the tumor. They learned it was not malignant. Still, after his brain surgery, Merlo had to teach himself to walk again. His dad, a retired teamster, would come over every day to help him, step by step.

Ten years later, he scored the last goal of the 11-day game for the white team, and players from both squads skated toward him to embrace him when the final horn went off.

"There are three things that matter in my life," Merlo said. "God, family and Roswell."

The most enduring bond on the ice might have belonged to Chris Evanco and Drew Case, friends since they were young children in Buffalo. Evanco, a special education teacher who graduated from Bennett High School, learned to play hockey on a frozen pond near some railroad tracks during the Blizzard of '77.

"People ask if we're tired," he said. "How can you get tired of doing something you love?"

As for Case, he was 2 when his father, Ray Case, died of cancer. His mother, Rhoda, married again. Her second husband, Hubert Peace, was a kind man, "a great stabilizing force in my life," Case said.

His stepfather's life was also claimed by cancer. Case confronted the same shadow one day, when he was shaving and found a lump in his throat. That moment changes you forever, Case said. He went to Roswell. He recovered from thyroid cancer. He speaks of his mother and his wife, Hilary, as "the angels" who saw him through.

For what he loves, for all he's lost, he played in the longest game.

Mike Lawley, who works in the insurance business, almost chose against taking part. "I was asked about playing several times, and I said no several times," he recalled. It seemed his friends wanted him to do the physically impossible. He thought of how worn he often felt from a weekend game of hockey.

But his wife, Kirsten, is a survivor of breast cancer. He reflected upon what she withstood and overcame. "It seemed to me that if she could deal with chemo and radiation for 11 months, I could play hockey for 11 days," he said.

He played. Amid the celebration once it ended, a jubilant Lawley raised both his hands toward his wife, in the stands.

The players agreed history's longest game had worn them down. They slept on cots, in short spurts that never truly offered rest. They could tell you a dozen different ways in which their bodies hurt. They felt isolated from their families and news of the world, and they admitted they looked forward to the instant when the game would be over.

The strange thing is, once it was, they didn't want to leave the ice.

Sean Kirst is a columnist with The Buffalo News. Email him at skirst@buffnews.com, write to him in care of The Buffalo News, One News Plaza, Buffalo 14240, leave a comment below or read more of his work at https://buffalonews.com/author/skirst