As Danny Gianniny's last shot of the week trickled toward the 17th hole from the rough, curving slightly left, he gradually elevated his right fist as the ball neared the cup. Some 25 yards at his back, his mom made sure she was watching this time. The hole prior, when Gianniny chipped in from the rough to take a one-hole lead on Billy Watson with two to play, Cindy Gianniny missed it. Engulfed by the mass watching her son near the green, Cindy couldn't see who hit the ball. All she heard was the roar. She thought it was for Watson.

This time, she had a clear view of her 18-year-old's shot dropping into the hole and clinking against the cup, leaving him as the last of 80 golfers standing for the International Junior Masters title. She saw the emphatic swing of his right fist. The elation beaming from his eyes through the black glasses resting on his nose. The flocks of fans who mobbed him on the fairway in celebration. Gianniny removed his gray Titleist hat, his wavy brown hair and patchy facial hair lining his jaw drenched in sweat, his navy blue and white striped polo drooping off his skinny frame. Watching from afar, Cindy tried masking the tears with laughter.

"Unreal," she said minutes after Danny's victory. "I got goosebumps and then started to weep."

Mark Gianniny, Danny's dad, whipped out his black iPhone and dialed a number before putting the phone to his right ear. On the other end was Danny's older brother, Jack, a rising senior at Delaware who's living in Baltimore for the summer. Danny loves having Jack home - the Gianninys are from Rochester - and Jack bet his younger brother at the beginning of the tournament that he'd come back for the entirety of next week if he won it all.

Mark broke the news to his oldest son, in disbelief that he actually had to follow through on his bet. Mark handed the phone to Danny, who talked to his brother for the entire walk from the 17th green to the clubhouse. After Danny spent all week hauling his own clubs around, his future St. Bonaventure teammate, Zack Chaddock, carried his navy blue and gold Pittsford Sutherland golf bag back to the main tent at East Aurora Country Club, a tournament-winning chip finally providing Danny some relief.

"It's my biggest win ever," he said. "It's an unbelievable feeling."

18-year-old Danny Gianniny from Rochester wins the International Junior Masters after chipping in from the rough on 17. He talks his win: pic.twitter.com/hJ7x9TcrpS

In the match-play final, Gianniny didn't lead until the 16th when he holed out from the rough to the right of the pin. Watson, the 18-year-old Australian, dominated early on, going 3-up after only four holes. Gianniny 3-putted on the first hole and then again on the second, flailing his arms in disappointment and tossing his ball across the green every so often across the front nine.

In last year's event, Gianniny lost in the Round of 32 as the No. 2 seed. This year, as the third seed, he vowed to make it further. In this month's New York State golf championship, Gianniny fell one stroke short of a playoff that determined the winner after 3-putting on the final hole. He's familiar with a wide range of the losing spectrum, from not coming close at all to coming up just short. As he gained momentum on the back nine, his celebratory grunts growing louder and his deficit turning into a lead, Gianniny didn't plan on falling short by any margin this time.

He thought a par would win Hole 17, a 475-yard Par 4 into the howling wind. "It's just a beast of a hole," Gianniny said. After Watson chipped to within inches of the cup from the fairway, all Gianniny needed was an up-and-down from the rough just beside the near-right bunker to force an 18th hole, still leading by one. Instead, he decided to wrap up the championship early.

"The way he started putting on the first two holes," Mark said, " … I’d rather have him chipping ... I never thought that he’d chip in again."

"There's not much you can do there at the end," Watson said. 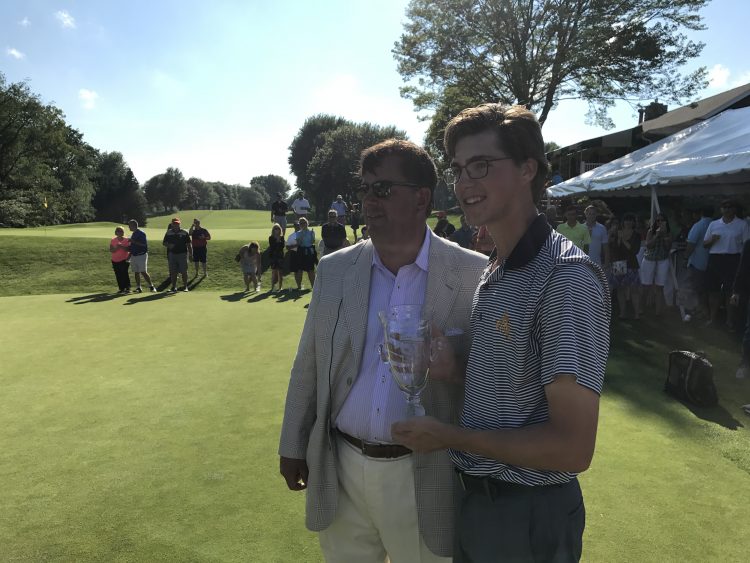 Driving a 10-year-old Danny to junior golf tournaments, Mark hammered one belief into his son's head. "Never give up," he stressed. "All your birdies might come on the last few holes." Mark hoped that was the case Friday, when his son trailed by two holes after 11.

Standing on the practice green, switching between the glass jug and framed pin flag signed by all 80 participants given to the winner, Gianniny reaped the benefits of heeding his dad's advice.

Just feet away off the green, Cindy tried to hide from those beckoning her for a picture. The moment was about her son, she thought, and she let her husband dart on the practice green, iPhone in hand, for a boys-only photo shoot. She was fine watching from afar, just like she did Danny's championship moment, but a bystander finally dragged her in. Both parents posed with Danny in between as camera shutters clicked in their faces, still missing their oldest but soon to be together again because after all, a bet is a bet.