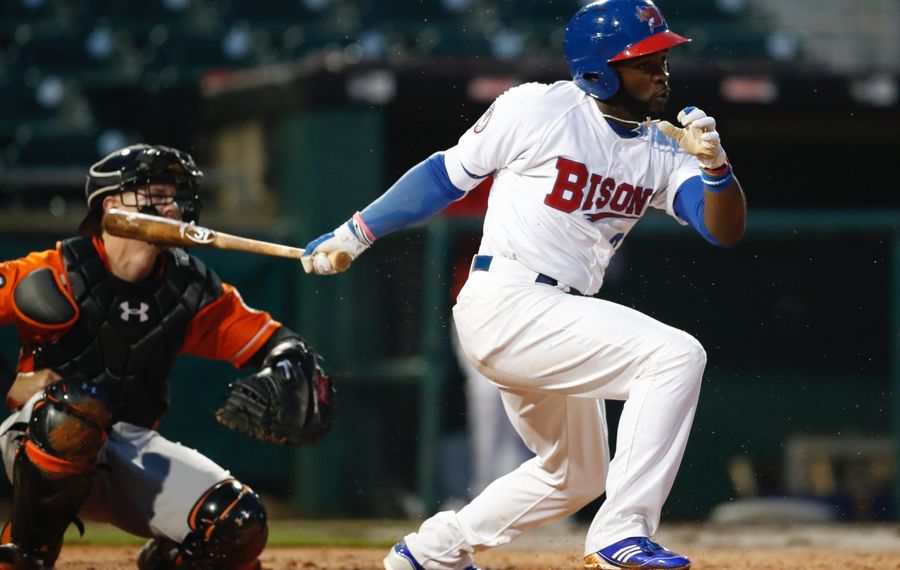 It's been a terrible, horrible, no good, very bad month for the Buffalo Bisons. We're talking historic proportions.

When June began, the Herd were in a good position. On June 4 they were eight games over .500 with a 31-23 record and a nice little three-game winning streak.

After an 8-1 loss to the Syracuse Chiefs at Coca-Cola Field on Friday, the Bisons were nine games under .500 with a 36-45 overall record.

The 2017 skid included a 10-game losing streak and three straight losses via shutout. The last time the team was shut out in three straight games was in May 1986.

But as Toronto Blue Jays General Manger Ross Atkins arrived in Buffalo Thursday, there was no panic from the parent club. In fact, Atkins said the Blue Jays were a big reason the Bisons were suffering a horrible Triple-A skid.

"I think mostly what we focus on first and foremost is the culture and the opportunity for guys to get better and improve," Atkins said. "We certainly have that with" Bisons manager Bobby Meacham. "That's what we're evaluating. We, the Toronto Blue Jays 25-man, have decimated this roster. Day-in-day, day-out. From a pitching standpoint, we're having to ask starting pitchers to come in and fill in as depth and pull them out of the rotation on a routine basis. Having to bring so many players because of the injuries up to the Major Leagues and then having injuries occur to Dalton Pompey, Darrell Ceciliani, Anthony Alford, who could have been here, has really limited the overall depth.

"The guys that we've taken out of there has hurt their overall team production. But from an environment standpoint there's no doubt that guys are getting better. Seeing guys like Ian Parmley get an opportunity is a testament first and foremost to him, secondarily to the staff that's put so much work in to help him. Same thing with Roemon Fields, putting in so much work and legitimately becoming a Major League option for us."

There have been 20 player moves in June which have hurt the Bisons lineup.

Lefty Jeff Beliveau made 17 appearances for the Bisons with one start. He had a 3-1 record with a 3.09 ERA, one of the most reliable arms out of the bullpen. He was recalled by the Blue Jays on June 5 and in eight relief outings is 1-0 with a 4.32 ERA.

Dwight Smith Jr. was called up twice, including an eight-game stretch from June 14-25. Smith Jr. was hitting .303 with the Bisons at the time of his last promotion.

Ian Parmley was hovering around .300 when he was called up on June 23 while the latest call-up was righthanded reliever Chris Smith, who in 14 appearances with Buffalo has a 3.93 ERA.

There are still plenty of quality players to comprise the Bisons lineup. Starter Mike Bolsinger put up an outstanding performance on Wednesday, pitching eight shutout innings in the Herd's 3-0 win over Rochester. He's been a better pitcher since returning from an MLB stint, saying he's "figured it out." Meacham noticed a difference in the pitcher as well, seeing a guy more eager than ever for his turn on the mound.

Rowdy Tellez, ranked the sixth best prospect in the Blue Jays organization, has started to find success at the plate and now is searching for consistency.

As for the terrible win-loss record in June, Tellez gave the classic line, "It's just baseball.

"I think we're playing very well as a team. It's just the way baseball is. Sometimes the hits fall. Sometimes they don't. Just right now it's not going our way so we're going to look to turn it around."

That's not just spreading sunshine on a bad record. Ten of the last 11 games were decided by two runs or less. Of the 22 losses by the Bisons this month, 16 were determined by three or fewer runs.

Some days, it is just baseball. The win-loss record in Buffalo still hurts, but for Atkins and the Blue Jays, as long as players continue to develop and buy into the organization's culture there is no concern about that bad June.

For Atkins, organization culture "means to get better every day. So if we have 500 people thinking that way, we see that as a competitive advantage. And then secondarily, the challenge is we are satellites. We are all over the North American continent into Latin America. We have scouts working in the Pacific. It's a challenge to bring people together and feeling united and connected to one goal and using one language and one common set of values. That's a lofty ask.