When Scooter Yoak takes to the skies in his P-51 Mustang this weekend at the Dunkirk Lake Shore Air Show, he'll be flying a piece of history.

"There's no difference between this and a national monument," Yoak said. "They are works of art and pieces of history.

It took 16 years for Yoak, of Aiken, S.C., to restore the World War II fighter plane. It was built in 1945 and flew stateside.

Yoak is among the flyers who will be zipping through the skies over Lake Erie. Opening ceremonies begin at 1 p.m. Saturday and Sunday with the first acts flying at 2 p.m.

Line up on Lake Front Boulevard to catch the show which will include aerial tricks, a wing walker and an all-women skydiving team.

A live feed of the show and pilot commentary will be broadcast on radio station WDOE-1410 AM/94.9 FM. Parking will be available at SUNY Fredonia and the Chautauqua County Fairgrounds.

Also flying this weekend will be Patty Wagstaff, who will do aerobatic stunts with her Extra, a German single-seater plane.

"I do loops. I do rolls. I do several rolls in a row," she explained. 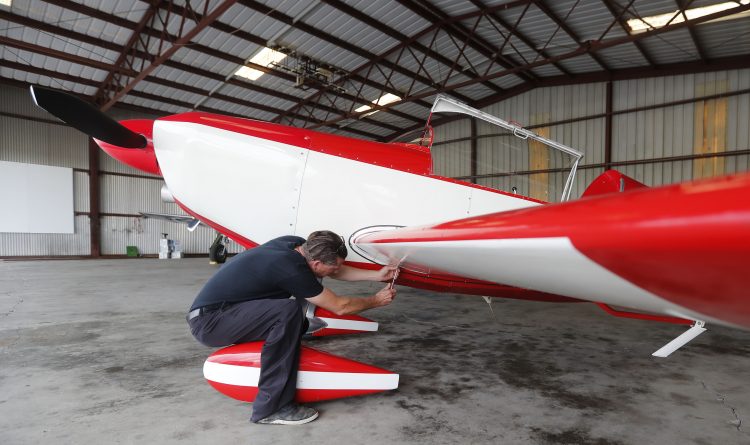 Trevor Rafferty tightens screws on the plane he built as he gets ready to perform in the second annual Dunkirk-Lake Shore Air Show taking off from the Chautauqua County/Dunkirk Airport Friday, June 30, 2017. (Mark Mulville/Buffalo News)

Loops and rolls are physically challenging, she said. "We have seatbelts but do you do get thrown around a lot."

Like Yoak, she has flown around the country and the world, sharing the joy of flying.

This weekend, she's looking forward to flying over the lake.

"We don't always get to fly over water," she said.