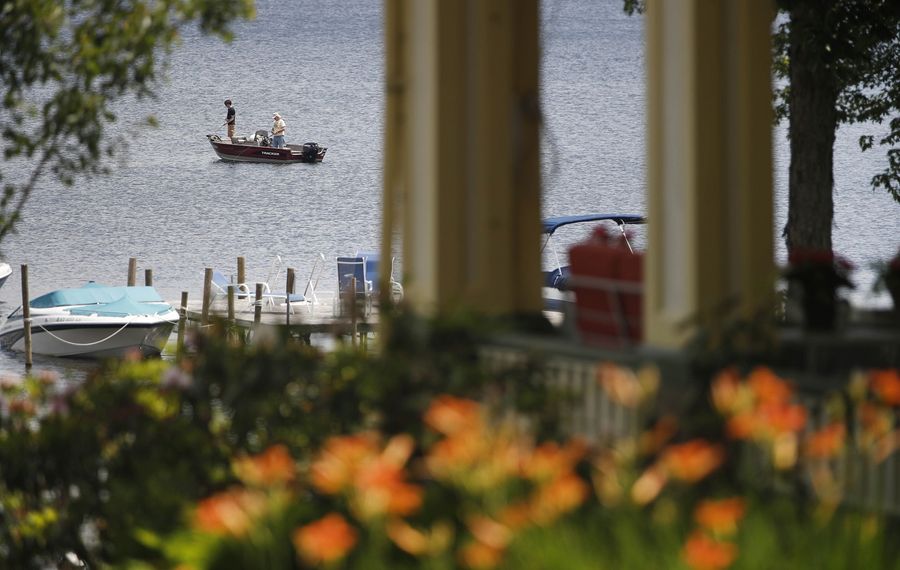 An hour south of Buffalo, near the picturesque towns of Westfield and Mayville, you'll find a row of gates.

Beyond them is a parallel universe.

In this strange place, people rise when they feel like it, in a world without cars or car stereos. They breakfast on their porches. They ride bikes and never lock them. American flags fly. Pansies bloom. A cat ambles down the narrow street.

Bells play a hymn. It's the Miller Bell Tower, on the banks of Lake Chautauqua. Then comes a louder sound, a somnolent blast. The Chautauqua Belle, a paddle wheel boat, is steaming into port. Folks smile at it from the verandas of the Athenaeum, an 1881 hotel with electrical wiring put in place by Thomas Edison himself. The sun is golden. The lake is blue.

The 19th century wants a word with you.

Leave your hectic life behind, it is saying. Come here to the Chautauqua Institution, where Ulysses S. Grant stayed, and Amelia Earhart spoke. Even if you can just come for a day -- Sundays are free -- get a look at this place. Drink it in. More than 100,000 people come here every summer. They must know something. 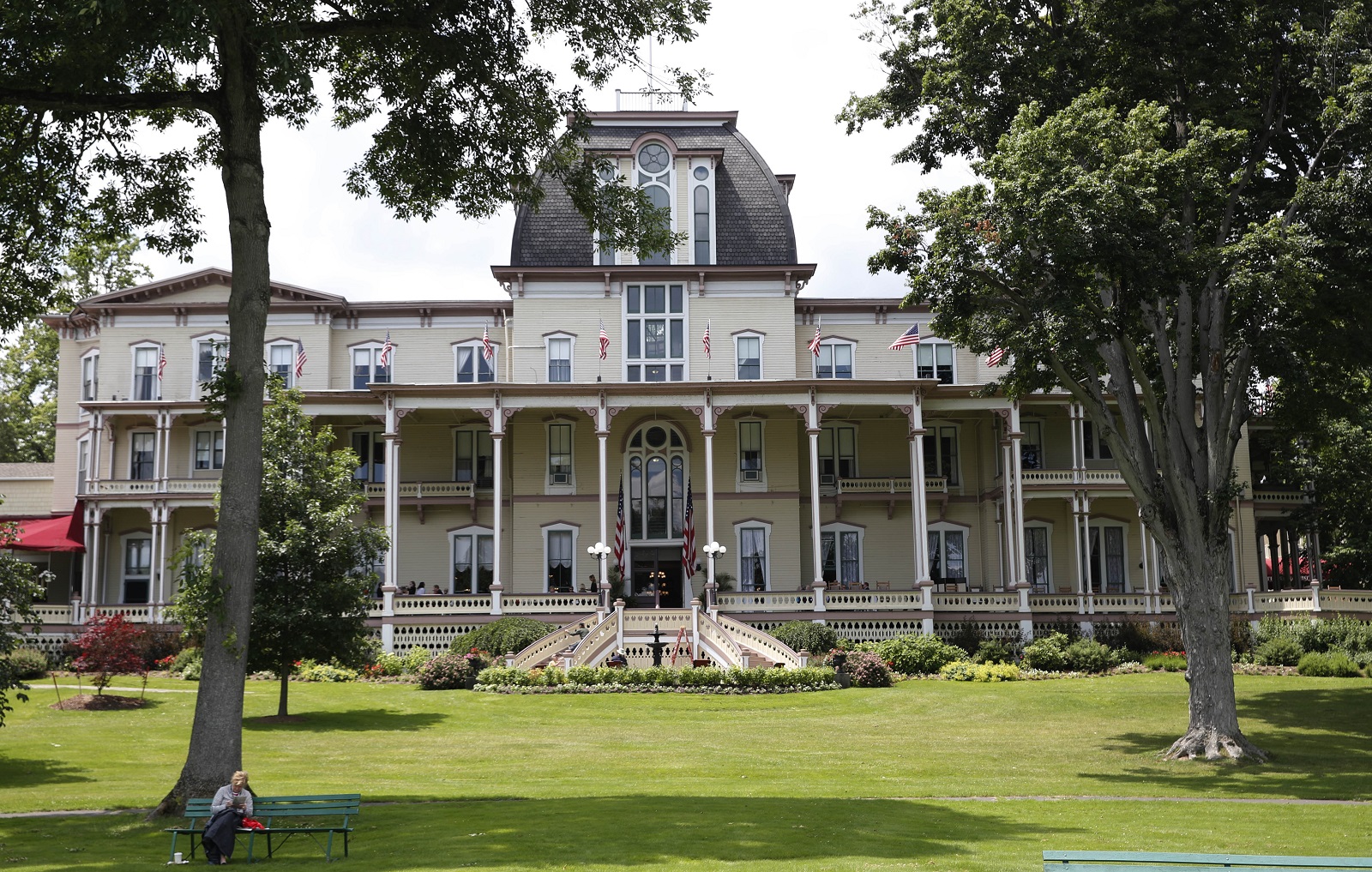 The Athenaeum Hotel is one of the iconic structures at CHQ. The hotel was built in 1881 and is the only hotel owned and operated by the Chautauqua Institution. (Sharon Cantillon/Buffalo News)

"It's sort of like a utopia in the middle of the outside world," mused Irene Leonard, who lives near Columbus, Ohio. She came here for the first time in 1968 with her husband, a Methodist minister.

She was relaxing on a bench with a book in the middle of Bestor Plaza, Chautauqua's village green. Kids were playing. The Smith Memorial Library had its doors open to the cool afternoon, and the Institution's legendary bookstore, and equally famed ice cream shop. From somewhere drifted the song "Frere Jacques."

The Chautauqua Institution was designed with such peace in mind. It was founded in 1874 as a teaching camp for Sunday school teachers. One founder was a Methodist bishop. The other, Lewis Miller, was an inventor. His daughter married Thomas Edison, which must explain Edison's help with the Athenaeum's wiring. 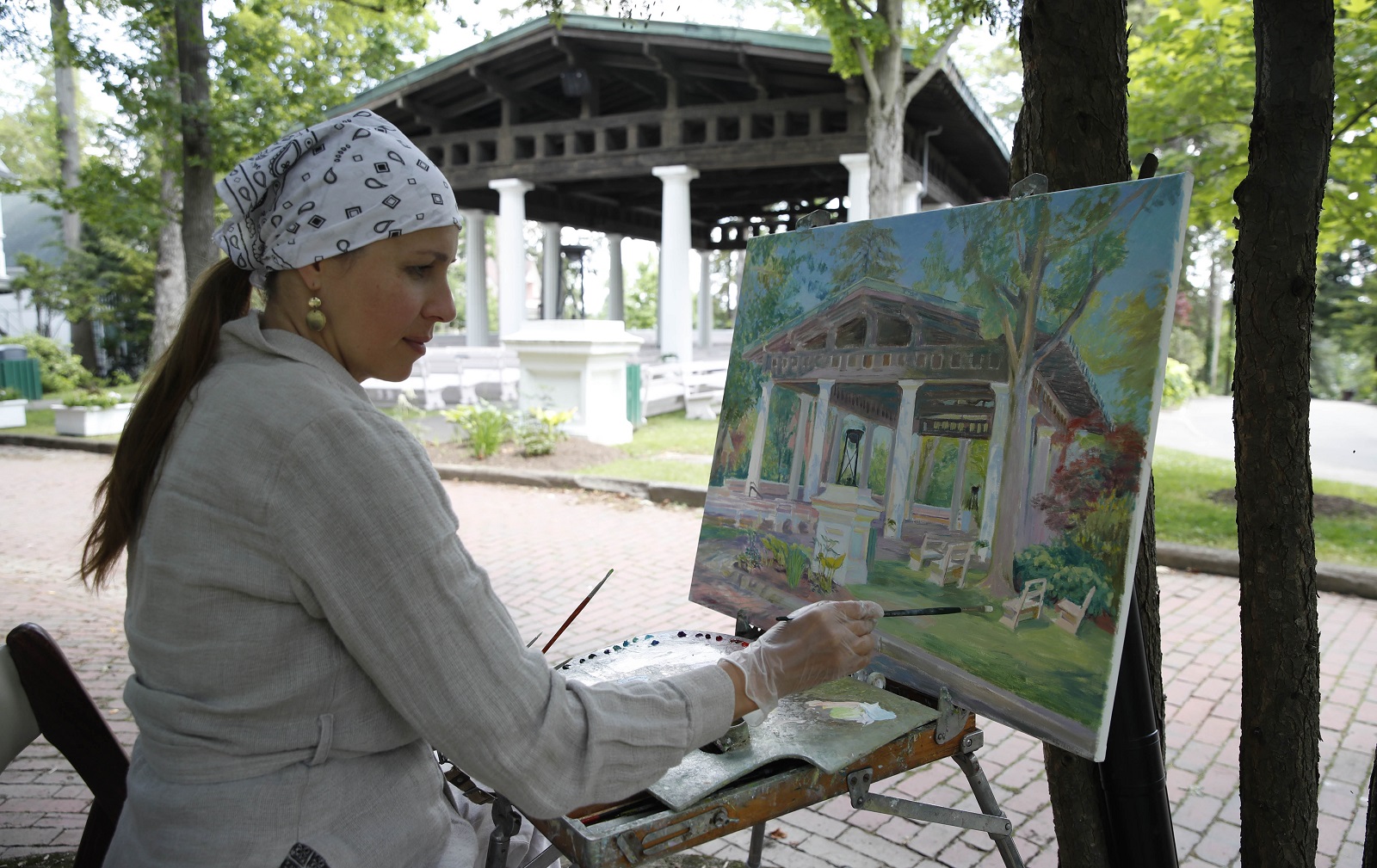 Professional artist Oksana Zhurakovski, of Youngsville Pa., does a painting of the Hall of Philosophy. (Sharon Cantillon/Buffalo News)

Once a bastion of mainline Protestantism, Chautauqua has evolved in recent years. Alcohol is no longer banned in the restaurants there. There are now daily Catholic Masses, and a Jewish denominational house. The arts and politics showcased at Chautauqua also veer frequently from what the founders must have imagined.

But Chautauqua's roots remain. One must-see is Palestine Park, down by the lake by the bell tower. Once a teaching tool for the Sunday school teachers, now it is a priceless piece of Americana. All the Holy Land is laid out at your feet, to geographical scale, with tiny models of all the towns, a hole in the ground for Jacob's Well. Look, there's Nazareth. And Bethlehem is way over there! 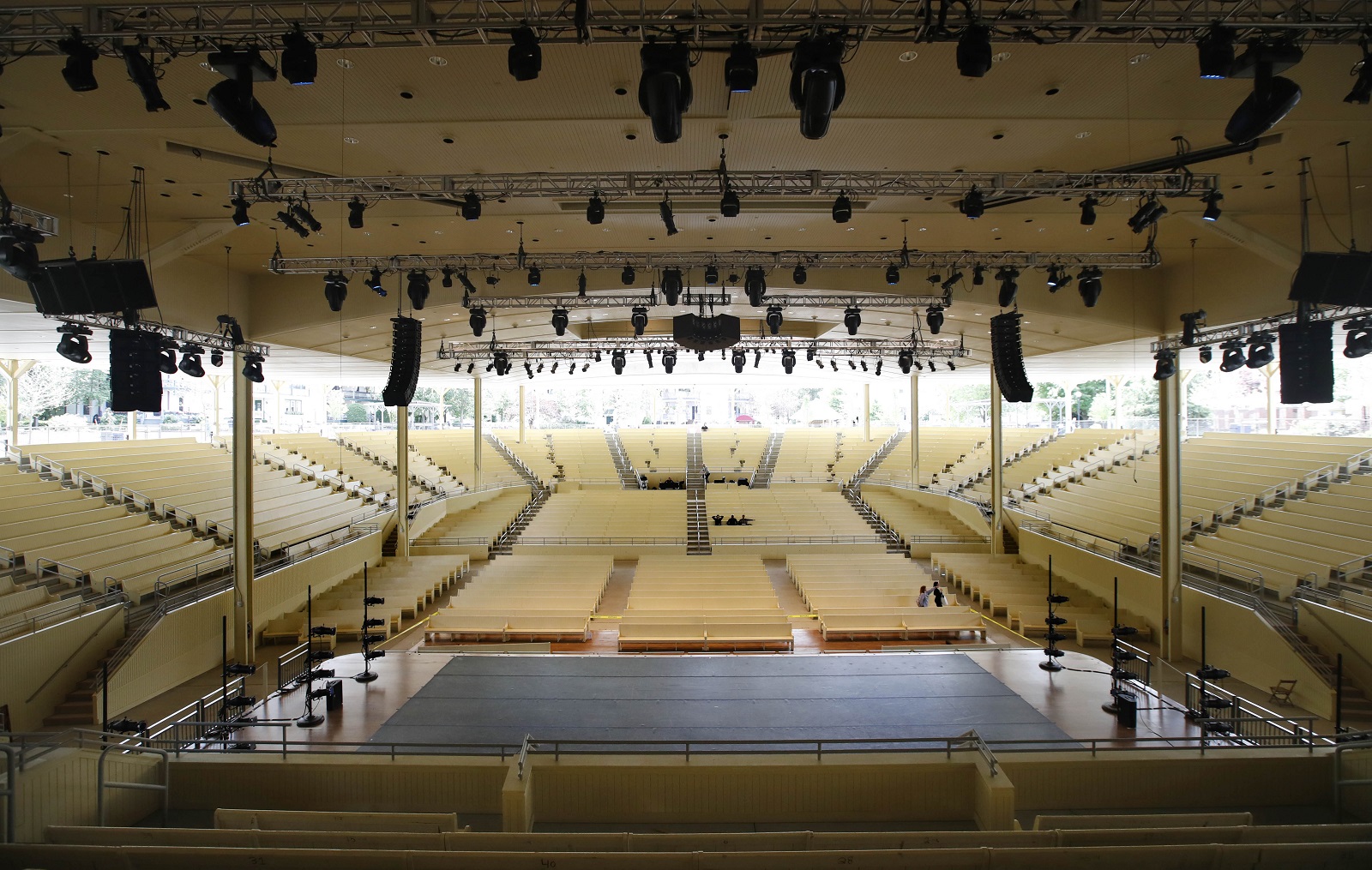 The new Amphitheater is open. The historic structure was demolished in September 2016. The new facility has modern facilities and improved accessibility, yet maintains a similar look as the former structure. (Sharon Cantillon/Buffalo News)

But no one would blame you if you simply want to kick back.

Doing just that on Wednesday, we found all kinds of gentle action. A group of guys were bowling -- but wait, we mean British lawn bowling. On a bowling green.

Meghan Collins, of Reno, Nev., was launching a canoe. Watching her paddle off, the silence struck us. Nothing but the calls of birds, the rustle of the leaves, the soft rocking and knocking of the boats.

Wandering into the Athenaeum, you find it gracious, not "fancy." The stately doors are open to the lawn that sweeps down to the lake. You can dine at the "captain's table," where they will seat you with strangers and you will find yourself in lively discussions. This is one of only two huge wooden lakefront hotels -- the Hotel Lenhart, in nearby Bemus Point, is the other -- that survive from the days when tourism reigned on these lakes, when folks took steamboats from one resort town to another. 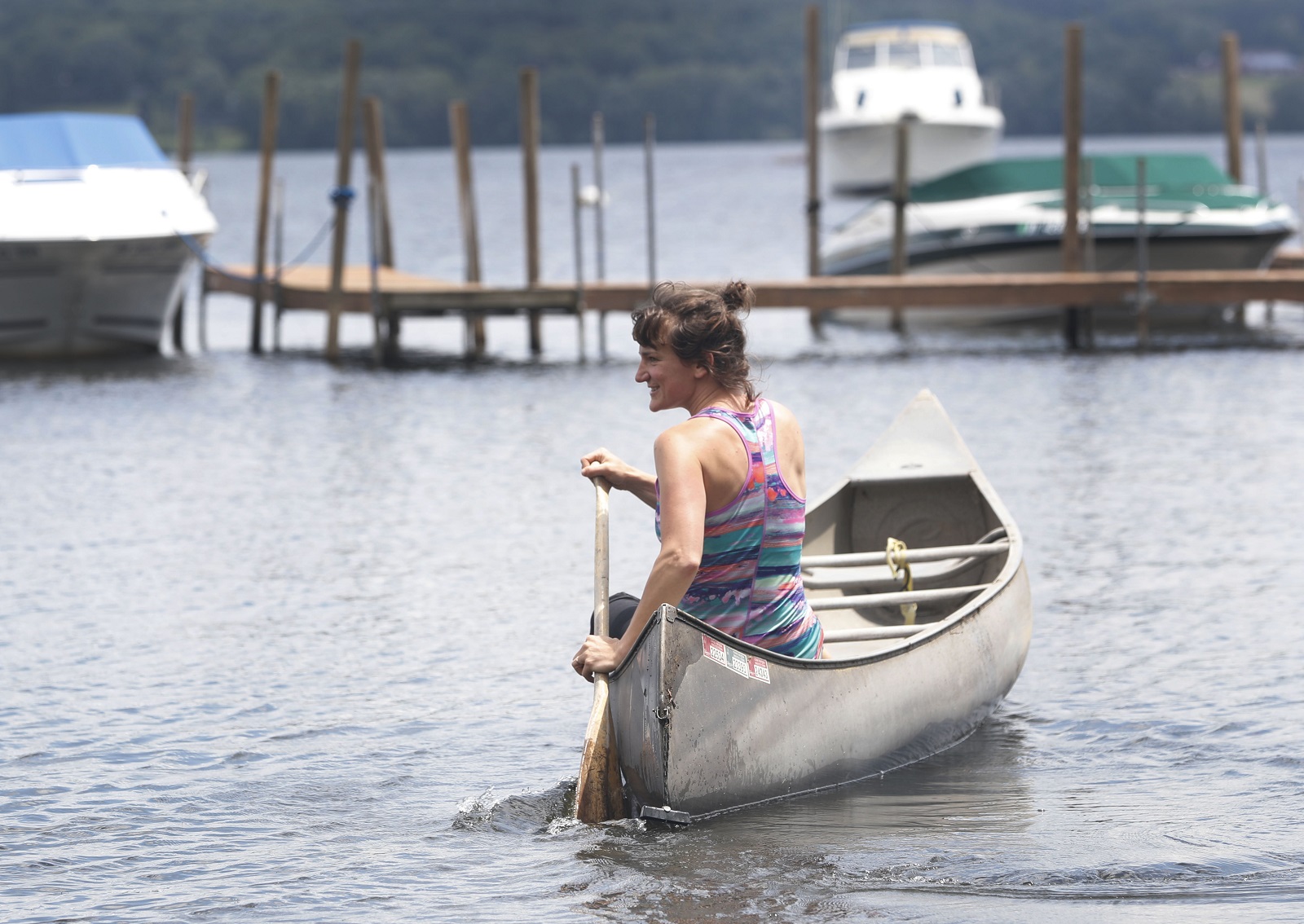 Meghan Collins of Reno, Nev., takes her canoe out. She grew up coming to CHQ. She spent last week helping her parents paint their 135-year-old house on the grounds. (Sharon Cantillon/Buffalo News)

Drifting on through your day, it's fun to stop by the Amphitheater and see what's going on.  Though recently rebuilt, the new Amp looks almost exactly like the old one. This is still the place where John Philip Sousa played, and Booker T. Washington spoke. The afternoon that The News visited, dancers were rehearsing to Handel and Bach. And not just any dancers: It was the Alvin Ailey American Dance Theater.

A handful of folks were lingering as we were. Among them was the artist Rita Auerbach. She spends the summer in Chautauqua, where she paints Chautauqua-themed watercolors.

Would she agree, we asked, that visiting the Chautauqua Institution is something every Western New Yorker should do at least once? 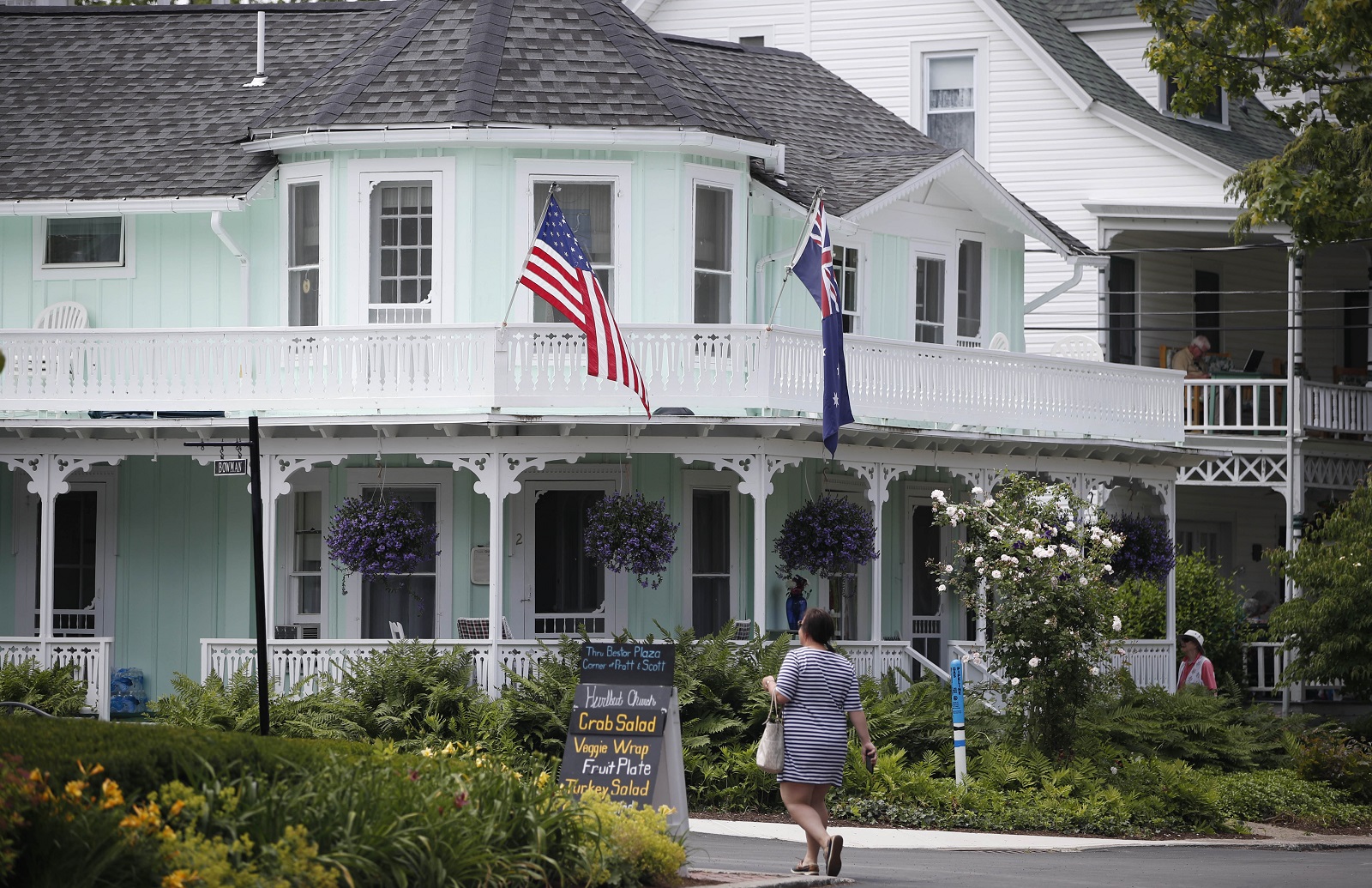 There are various types of accommodations at CHQ such as denominational houses, historic inns, guest houses, apartments, condos and hotels. (Sharon Cantillon/Buffalo News)

One was the nearness to Buffalo. When something back home beckons her -- a Burchfield-Penney Art Center meeting, for instance -- she can drive there, and drive back to Chautauqua.

"People do that in Los Angeles just to go to work," she quipped.

And what is the other reason?

"It is that no one can describe it to you," Auerbach said. "You have to be here." 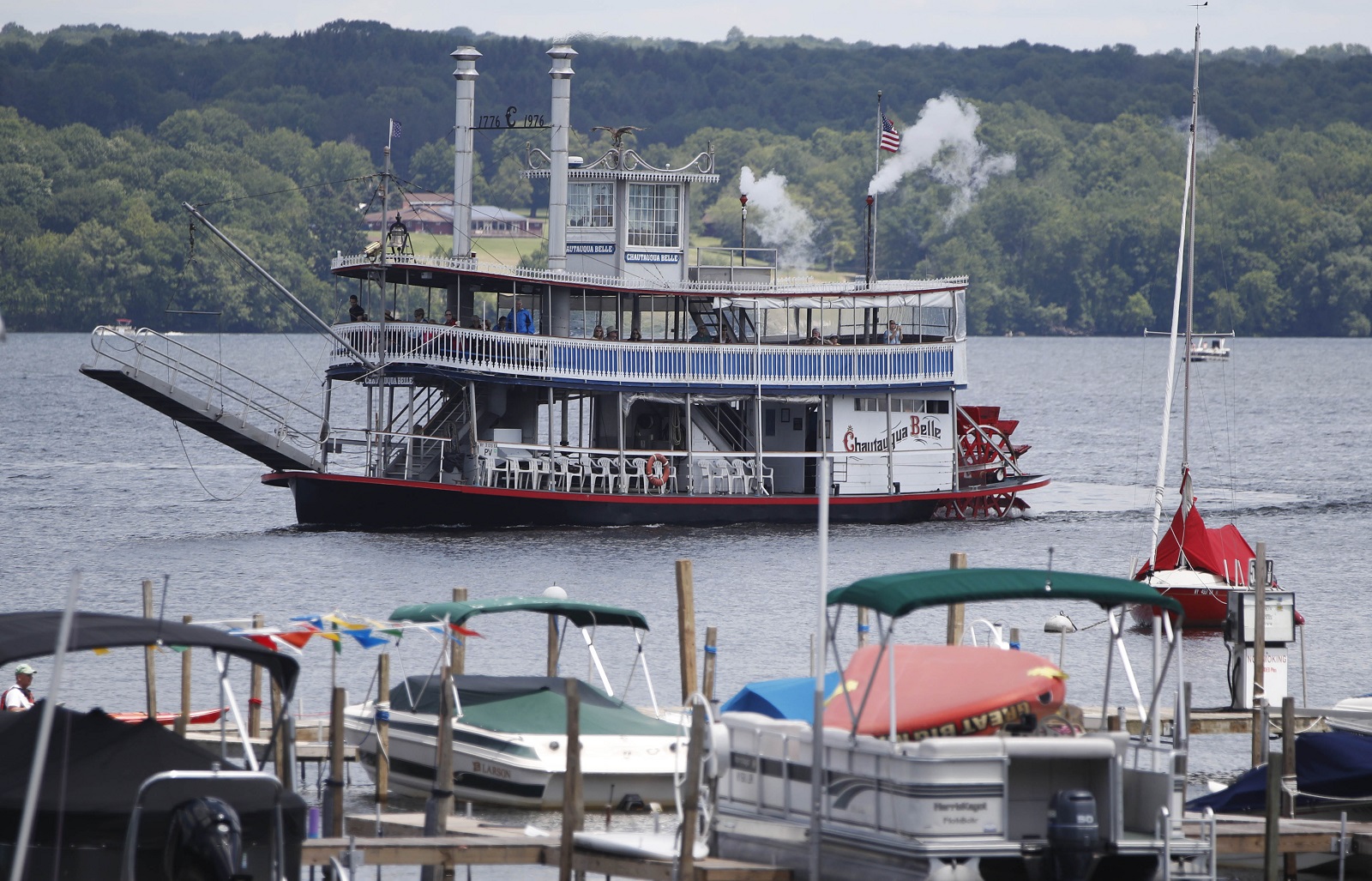