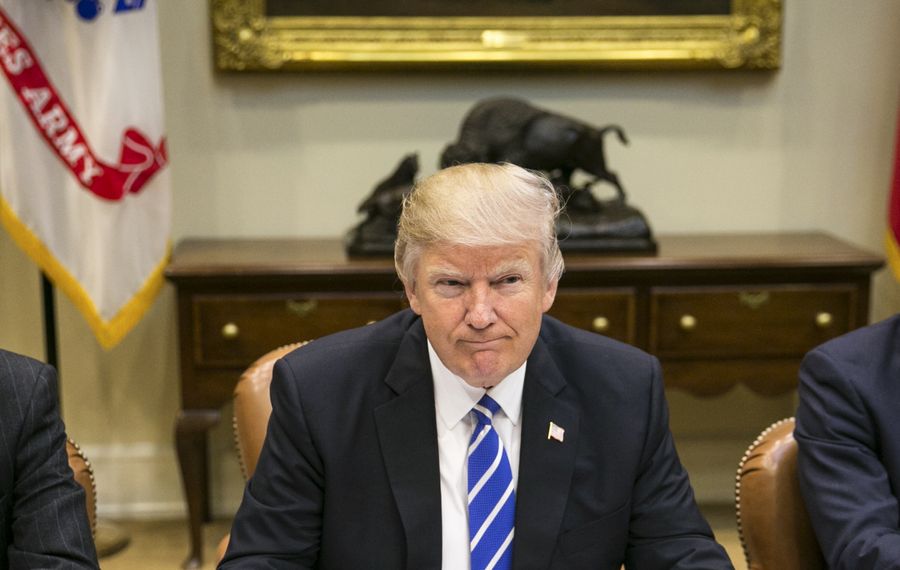 President Trump's full-throttled attack on the hosts of MSNBC's "Morning Joe" - the latest in a series of assaults on the news media and its members - unleashed a wave of condemnation from Congress.

Trump took to Twitter on Thursday morning to launch an attack with clearly sexist overtones against MSNBC host Mika Brzezinski, suggesting that he had seen her "bleeding badly from a facelift" at his Mar-a-Lago estate several months back.

I heard poorly rated @Morning_Joe speaks badly of me (don't watch anymore). Then how come low I.Q. Crazy Mika, along with Psycho Joe, came..
- Donald J. Trump (@realDonaldTrump) June 29, 2017
...to Mar-a-Lago 3 nights in a row around New Year's Eve, and insisted on joining me. She was bleeding badly from a face-lift. I said no!
- Donald J. Trump (@realDonaldTrump) June 29, 2017

Republicans and Democrats from the Senate and House reacted strongly to the president's Thursday-morning tweets, calling Trump's language "unpresidential" and beneath the prestigious office he holds.

"Obviously, I don't see that as an appropriate comment," House Speaker Paul Ryan, R-Wis., said. "What we're trying to do around here is improve the civility and tone of the debate, and this obviously does not do that."

Trump's tweets arrived three weeks after a 66-year-old from Illinois opened fire on members of Congress during a baseball practice in Alexandria, Va., wounding five and nearly killing House Majority Whip Steve Scalise, R-La. The bloodshed prompted many in Congress to call for more civility, restraint and cooperation, an aim Ryan seemed to reference during a news conference Thursday.

It was echoed by numerous other members of Congress, who took to Twitter to rebuke Trump's tweets:

"If you can't stifle the press, then you attack them personally. Today's tweets from Donald Trump are unpresidential and warrant an apology."
- Ed Markey (@SenMarkey) June 29, 2017

"Mr. President, your tweet was beneath the office and represents what is wrong with American politics, not the greatness of America."
- Lindsey Graham (@LindseyGrahamSC) June 29, 2017

"Two years ago this week, President Obama sang 'Amazing Grace.' Today, we have a president who's amazingly graceless. These tweets are vile.:
- Rep. Roybal-Allard (@RepRoybalAllard) June 29, 2017

"This is not okay. As a female in politics I am often criticized for my looks. We should be working to empower women."
- Lynn Jenkins (@RepLynnJenkins) June 29, 2017

"Is there a parent in America who wouldn't punish their child for publicly humiliating a woman like this?"
- Jim Himes (@jahimes) June 29, 2017

"Mr. President, it is incumbent upon ALL of us to tone down this divisive political rhetoric. #RestoreCivility"
- Adam Kinzinger (@RepKinzinger) June 29, 2017

"Seriously? 1 week after calling for civility? Bullying women for how they look is insulting & damages the integrity of the office you hold."
- Rep. Cheri Bustos (@RepCheri) June 29, 2017

"@realDonaldTrump's tweets this morning were vile, sexist, and unbecoming of an American leader. What else is new?"
- Jan Schakowsky (@janschakowsky) June 29, 2017

"Responding to criticism w/ personal insults is not presidential. It's not even adult. POTUS must grow up, put the phone down, get to work"
- Judy Chu (@RepJudyChu) June 29, 2017

"I wish @realDonaldTrump would focus more on improving #WomensHealth and less on their appearance. #TheyGoLowWeGoHighhttps"
- Nita Lowey (@NitaLowey) June 29, 2017

"Americans deserve a president, not a petty schoolyard bully. These sexist comments have no place in the @WhiteHouse. Unhinged and shameful."
- Jim McGovern (@RepMcGovern) June 29, 2017

"The President's behavior is consistently beneath the dignity of the office he holds. Truly sad."
- Congressman Tim Ryan (@RepTimRyan) June 29, 2017

"This isn't just about Trump. We already knew he has no respect for women. It's also about the GOP - which continues to defend & support him."
- Rep. Barbara Lee (@RepBarbaraLee) June 29, 2017

"When leaders are bullies, it's an implicit license to others - sexual harassers, white supremacists, islamophobes - to spread their hate."
- Rep. Barbara Lee (@RepBarbaraLee) June 29, 2017

"It's up to everyone to reject this behavior. By not speaking out, my GOP colleagues are complicit in the sexism & bigotry incited by Trump."
- Rep. Barbara Lee (@RepBarbaraLee) June 29, 2017

"Many Republicans will condemn this tweet in strong moral terms.
"Then they will spend rest of day trying end insurance for 22m Americans."
- Chris Murphy (@ChrisMurphyCT) June 29, 2017