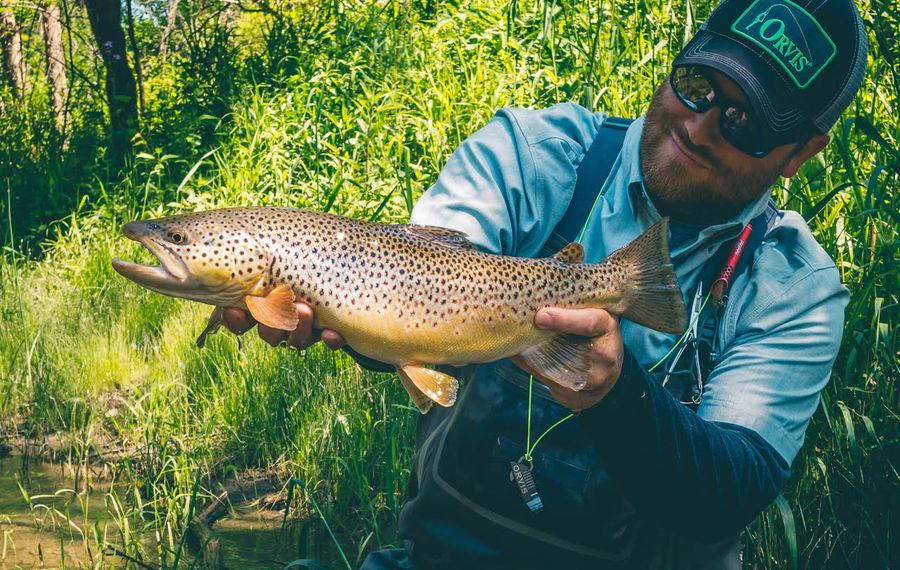 Now that summer is in full swing, there seems to be a multitude of fishing contests going on, depending on your level of expertise, species preference and body of water you want to fish. If Lake Ontario is your cup of tea, the Lake Ontario Counties (LOC) Trout and Salmon Derby runs from June 30 to July 30. Details at www.loc.org. The Erie Canal Fishing Derby kicks off on July 5 and runs through July 16, taking in seven different fish species. There is a family focus. Contest boundaries run from the Niagara River to Albion. Check out www.eriecanalderby.com. On Lake Erie, Rob Ray’s Big Dawg Walleye Tournament will be held in Dunkirk July 8-9. Call Mark for details at 998-9871. And if it doesn’t matter where you fish, the NYS Summer Classic Tournament is open to all Empire State waters for a variety of fish species, running through Aug. 31. Visit www.nyssummerclassic.com for more information.

Walleye seem to be cooperating a bit more, especially from Buffalo to Myers Reef in 30 to 50 feet of water on worm harnesses. Capt. Matt Yablonsky of Wet Net Charters was having good success inside of Myers Reef running three-way rigs with a worm harness offering. According to Capt. Jim Steel with Innovative Outdoors, the water has been all messed up with the recent weather patterns – water spouts and all this week. Dunkirk and Barcelona had some fish in the 40- to 50-foot range. Steel was getting ready to organize a WNY Heroes Fishing Tournament out of Dunkirk on Friday (June 30). For more information check out www.lakeeriewalleyetournament.com or call Steel at 481-5348. Lots of smaller walleye were being reported outside the breakwall at Dunkirk in 22 to 27 foot depths. Bass fishing has been good when the weather cooperates. The flats outside structure in 35 to 40 feet of water has been pretty consistent. Drop shot rigs seemed to work better than tubes or swimbaits over the weekend. Shiners and crabs will work.

A Sportsman's Tale: Why this catch took a Buffalo angler on a half-mile ride

Capt. Matt Yablonsky of Youngstown reports that the A-Tom-Mik stud fly was working well for him again. His 240-foot slide diver had the stud behind a spin doctor and the 210-foot slide diver had a glow pro-am fly behind a spin doctor. High slides had spoons at 180 feet and 150 feet. The riggers were set at 50, 60 and 70 feet with magnum Silver Streak spoons. Center rigger was running a single spoon and the out and downs were double stacked. He boated seven kings and two lake trout for three hours of fishing in the morning. He also released eight juvenile kings unharmed. They also dropped two good fish that were both part of triples. Taking advantage of the king fishing going on right now were Mark and Jake Romanack with the Fishing 411 TV Show out of Michigan. Best bait set-up was a spin doctor with meat rig. Lots of jacks, but they did boat four quality kings before they got chased off the lake due to winds. Best depth was 70 to 80 feet down over 140 feet of water along the Niagara Bar drop-off.

Lower Niagara River bass action has been pretty good the past week and the moss hasn’t been too bad, although it ticked up a notch on Tuesday morning. Bass have been hitting shiners and crabs, as well as spinnerbaits, tubes and swim baits. Smallmouth could be caught from Lewiston down to the Fort, as well as in Devil’s Hole.  In the Upper Niagara, Mike Rzucidlo of Niagara Falls reports good largemouth fishing on spinnerbaits, plugs and jigs. Walleye are still hitting worm 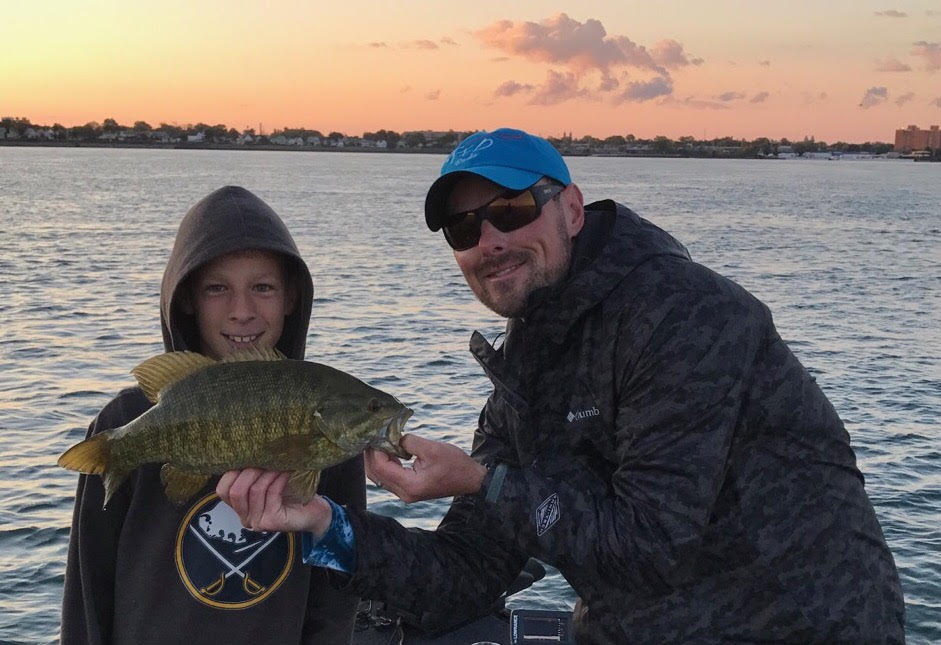 Adam Dunning of Lancaster with his first fish ever -- a hefty smallmouth bass caught on a crawfish in the Niagara River while battling the wind with Capt. Ryan Shea of Brookdog Fishing Company.

harnesses at the head of the river. Capt. Ryan Shea of Tonawanda has been targeting bass and musky in the upper river and crayfish and shiners are working on the bass off three-way rigs. He’ll then switch over to fly imitations of that live bait, picking a few fish up that way, too. Adam Dunning, 11, of Lancaster caught his first fish ever – a hefty smallmouth – on a crayfish this week. Musky luck has not been there, although Shea did report a few follows and a few fish on that he lost. Black colored Red October tubes were getting the most attention. For the most part musky fishing has been slow, with most of the fish being reported in the upper 30-inch to lower 40-inch range.

Musky and walleye is still good according to Mike Sperry at Chautauqua Reel Outdoors. However, the heavy rains and wind have knocked the water clarity down a bit. Water temperatures dropped back to 71 degrees also. For walleye, try slow trolling worm harnesses along weedlines; vertical jigging in the weeds is still working. Some fisherman have been having success trolling lead core for walleye in the south basin.The casting bite is still on for musky. Six- to 9-inch jerkbaits are getting fish to hit. Lots of perch both yellow and white. Jigs tipped with a crawler will work near the weedlines.

Drew Nisbet with Orvis Buffalo in Williamsville, reports that inland trout fishing in the WNY region continues to be outstanding as July is quickly approaching. “With regular bouts of rain and cool overnight temperatures in many of our creek valleys, the streams are maintaining their flows nicely and water temperatures are just peaking above the 60-degree mark,” says Nisbet. “Despite optimal stream conditions and lots of freshly stocked, holdover and wild fish around, angling pressure by all accounts has been extremely light. Excellent opportunities exist for the fly angler to get out his streamer box and rip some meat on the up and down side of these high water events that recent lake-effect rain storms have brought. During periods of dropping and clearing flows, I like to strip or swing a olive/yellow streamer, working the water across and downstream as I search out active trout. Nymph fishing with a two-fly rig, including a large Sz10 Black Stonefly as the anchor fly and Sz16 Bead Head Flash Back Pheasant Tail tied on a tag, has consistently proved effective for me in a variety of water conditions. This week look to target dropping and clearing flows with streamers on Oatka Creek in Leroy and the Upper Cattaraugus in Arcade and Yorkshire.” Incidentally, if you are looking to get started with fly fishing, give Nisbet a call at Orvis. They have openings in their next three ishing 101 Classes July 1, 8 and 15 from 8 a.m. to 10 a.m. To register call 716-276-7200 or log on to www.orvis.com/buffalo.