Have you seen that cool, new mural in North Buffalo?

The one at the corner of Colvin Boulevard and Hertel Avenue.

It’s on the east and west sides of the Joe’s Deli building. 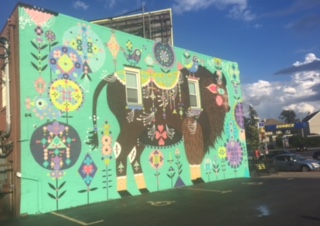 The Albright-Knox Art Gallery commissioned the work as part of its public art initiative. It was unveiled last week.

And more murals may be on the way, possibly on a building across the street from Joe’s, said Delaware Council Member Joel P. Feroleto. The project is located in his district.

“We talked with Albright-Knox and they said when you have density in public art, that’s when you get visitors and people to come,” Feroleto said. “So if you have maybe two murals and a sculpture in close proximity then it’s much more likely to generate visitors.”

Is Buffalo having a “cultural renaissance"?

"Surface" – a contemporary global design magazine – thinks so, and they’re letting people know about in an article this week written by a Buffalo native who has been living in Manhattan since 2008.