ALBANY – Carl P. Paladino said that, if he could, he would take back the inflammatory comments he made about President Barack Obama and his wife that cast him in the national spotlight.

"I sincerely regret my words," Paladino said. "I regret thinking them and saying them."

“I regret the shame I brought on myself and my kids,” Paladino added. “It wasn’t a good day for me.”

The admission was arguably the most compelling testimony from Paladino during the fourth day of the hearing to determine if he should be removed from his seat on the Buffalo School Board, but it made no difference to protesters outside.

As the prominent developer took the stand Tuesday, a couple dozen protesters from Buffalo rallied outside the state Education Department building chanting “Hey hey, ho ho, Paladino has got to go.” Their chants were audible inside the hearing room as Paladino gave his testimony. 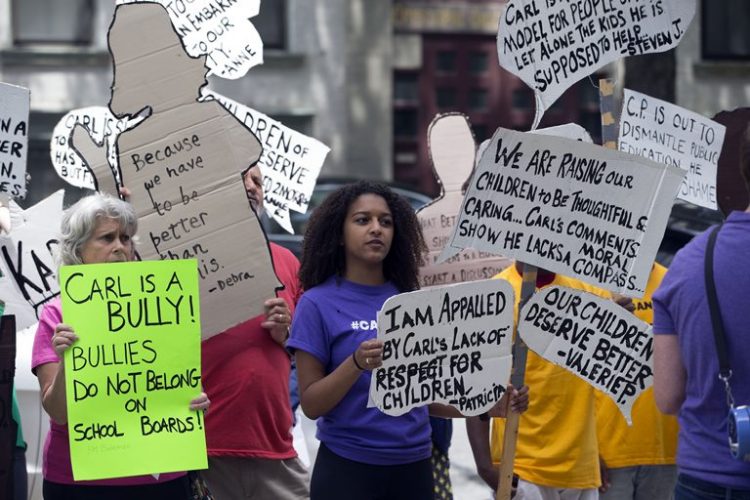 Protesters outside the Paladino hearing at the State Education Building in Albany on Tuesday. (Mike Groll/Special to The News)

“We brought with us the voices of the people of Buffalo,” said protester Caitlin Crowell. "I hope by being here we remind Commissioner Elia to do her job."

Paladino was the last to testify in what was a long and at times grueling four days of proceedings before State Education Commissioner MaryEllen Elia – a hearing that was supposed to center on whether the two-term board member for the Park District should be removed for violating board policy when he publicly disclosed information discussed in an executive session.

But Paladino’s legal team managed to successfully redirect the hearing’s focus, arguing that those seeking his removal were retaliating for rude comments by him about the Obamas that were published in a local weekly paper last year – not disclosing confidential information.

His attorneys also tried to paint the picture that Paladino went public with information – in this case about the new teachers contract – for the best interest of the taxpaying constituents. That reading of events was a large part of his defense on Tuesday, set up by fellow Board Member Larry Quinn during his morning testimony.

In the process, Paladino managed to lambaste the people and issues that have been in his crosshairs since he joined the board. During his testimony, Paladino ticked off a litany of assertions about his foes including:

However, attorney Frank W. Miller, who is representing the board members trying to remove Paladino, went on the attack during cross examination in what were some of the livelier moments of the four-day hearing.

Miller never mentioned the Obama comments, but pounded away at Paladino on the confidentiality issue, asking him if he ever read the code of conduct for board members.

"No," Paladino said. "I've read parts of it. I haven't read the whole thing."

Miller asked what section of the law showed a time limit on confidentiality for what was said in executive session.

"Where is it inferred?" Miller said.

Some of the other highlights from the Paladino testimony:

On Superintendent Kriner Cash: Paladino said he was not at the meeting where Cash was hired, but would not have voted for him.

“I think Kriner Cash is a very bright guy," Paladino said, "but I didn’t see him understanding the nature of our board and the fact he would have to deal with very onerous people who had different agendas."

On Buffalo Teachers Federation President Philip Rumore: Paladino said he respected Rumore for what he has accomplished, but not for his integrity. He called Rumore a "schemer."

During one conversation with Cash, Paladino told the superintendent to be wary of the union president.

"Oh, I can handle him," Cash said, according to Paladino.

"You have no idea," Paladino told him.

On the teacher contract: Paladino described how important it was for the district to get a good deal in the long-simmering teacher contract, which all board members over the years wanted to settle.

"Some wanted to settle the contract carelessly, recklessly and with abandon,” Paladino said.

On why he is a target for other board members: "They didn't want anybody exposing the underbelly of this beast, and from my perspective that became my challenge."

Both sides emerged from the courtroom feeling good about the day's proceedings.

"I think we proved our case overwhelmingly that Carl Paladino violated his oath of office," Miller said outside the courtroom. "The best proof of that was his own testimony."

"I think that we had two strong witnesses on the stand today," said Dennis C. Vacco, Paladino's attorney. "Our strategy was to help advance the public interest portion of our defense through Larry so that it wasn't just Carl. I think Larry made a very compelling argument around public interest."

The last day of the hearing will be Wednesday, when attorneys are scheduled to give closing arguments.

Tiffany Lankes– Tiffany Lankes joined The Buffalo News in 2013 and primarily covers the Buffalo Public Schools. She has written about education since 2003 at newspapers in Florida and New York. In 2008, she was a nominated finalist for The Pulitzer Prize. Lankes is an Amherst native and graduate of Sacred Heart Academy and Syracuse University. She started her journalism career writing for the News’ NeXt section.