WASHINGTON – Depending on how you measure it, Rep. Chris Collins is somewhere between $5 million poorer and $44 million poorer after the stock he touted to colleagues and Buffalo's elite collapsed in value in Australia early Tuesday morning while America slept.

And that multi-million dollar loss might be the least of his worries.

Collins said Tuesday he didn't sell any of his shares of Innate Immunotherapeutics, the Australian drug company whose stock market value plunged nearly 94 percent after it announced that its key product, an experimental treatment for multiple sclerosis, failed in clinical trials.

But the company that Collins admittedly bragged about as if it were one of his children may have been misbehaving badly in the past week. Some experts wonder if someone tied to Innate set off a chain of events that could have amounted to a "pump and dump" – an illegal practice in which a troubled company works to inflate its stock price so insiders can sell off before it announces devastating bad news.

Here's that chain of events: 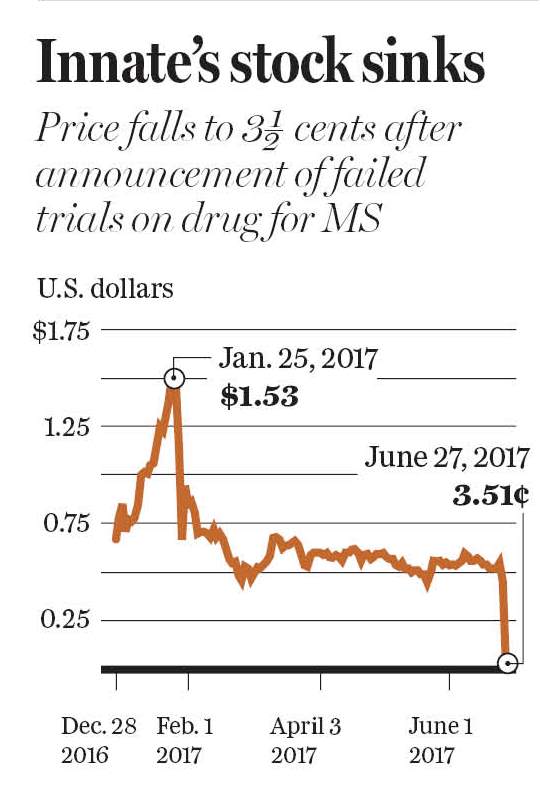 "This is not the way the markets are supposed to work," said Williamsville financial planner Anthony Ogorek. He said that penny stocks – long-shot companies that trade for pennies – are notoriously prone to pump-and-dump schemes.

A source close to Collins insisted, though, that last week's chain of events can be easily explained. Trading in Innate's stock spiked in America last Friday because investors saw that a major company announcement was coming, not because someone tipped them off to sell, said that source, who asked not to be identified by name.

No matter what happened, investigators at the Office of Congressional Ethics – who are already investigating Collins' investment in Innate – may be interested in last week's trading in Innate.

Collins has invested in Innate for 15 years and has long said he thought the company might be on the verge of a breakthrough treatment for multiple sclerosis.

Looking just at the actual dollars Collins put into Innate over those years, he likely lost about $5 million, sources close to the congressman, a Clarence Republican, said.

But there are other ways to count.

Bloomberg News looked at Collins' Innate investment and measured how much he lost compared with his shares' value last week, and calculated that Collins suffered a paper loss of $16.7 million.

Statnews, another business news website, calculated Collins' would-be losses as if he had sold his share when Innate's stock reached its peak value of $1.77 a share in January. Looking at it that way, Statnews reported, Collins' paper loss totaled $44 million.

Collins' losses total in the millions because he is by far Innate's largest shareholder. According to the company's website, he owns 16.8 percent of the company's stock. His son, Cameron, and daughter, Caitlin, each own 2.3 percent of Innate's shares, meaning the Collins family together owns about a fifth of Innate.

Not surprisingly, then, Collins appeared visibly shaken by the bad news, which he termed "a shocker."

Asked what he would say to those whom he had told about Innate, Collins said: "Sophisticated investors know there's a risk, and, as you now know, that there was never any inside information that would indicate otherwise."

He told plenty of people about Innate, too. Both Collins and former Rep. Tom Price of Georgia – now President Trump's Health and Human Services secretary – bought Innate stock at a then-discounted price of 18 cents a share in a private stock sale last year.

Innate had a second private stock sale later last year in which Price and Hook bought additional discounted shares, as did several Buffalo-area business leaders, such as Brian Lipke of Gibraltar Industries.

Thomas M. McMahon and his wife, Ann, took part in that first private stock sale. And the local company where McMahon serves as president and CEO, CUBRC Inc., is also a longtime investor in Innate.

Asked about the stock's collapse, McMahon said he was "disappointed obviously as a shareholder, but especially for the people suffering from SPMS (secondary progressive multiple sclerosis), for which there is still no therapy."

But four Republican members of the House – Reps. Markwayne Mullin of Oklahoma, Billy Long of Missouri, Mike Conaway of Texas and Doug Lamborn of Colorado – bought Innate stock earlier this year nearer its peak price and may have lost much of their investment.

None of those lawmakers could be spotted off the House floor for comment on Tuesday afternoon.

But the internet was abuzz with commentary about Innate – and especially about the unusual chain of events that ended in the stock's collapse.

"TOTAL PUMP AND DUMP!" read the headline of one chain of commentary on Innate on HotCopper, an Australian stock investors' website.

The unusual trading activity Friday "suggests that somebody with knowledge of the results was front-running the announcement," Sean O'Neill, a Motley Fool analyst, wrote. "That’s something I’d hope the regulator will be looking closer at."

In stock market parlance, "front-running" is the illegal practice of trading stock based on inside knowledge that the public will find out later.

Rep. Louise M. Slaughter – a Fairport Democrat who authored a law aimed at preventing insider stock trading among members of Congress – also said the odd chain of events made her wonder if something improper had happened.

"This raises very serious questions as to when Congressman Collins knew about the drug’s performance and who is responsible for the suspicious trading before the drug’s failure was publicly known," she said. "This development only raises more questions, and we need to get the answers. It cries out for an investigation."

People allied with Innate, however, seemed much more focused on the failure of MIS416, their multiple sclerosis drug, than on the company's stock price.

"These results are a shock and definitely not what we were expecting based on our previous clinical experience with MIS416 and the reporting of treatment benefits we have received from many compassionate use patients over an extensive eight-year period," said Innate's chief executive officer, Simon Wilkinson.

"Compassionate use patients" are those allowed to take the drug as an experimental last resort in their treatment.

"These data will be as distressing to them as they will be for all the stakeholders who were relying on the outcome of this study," Wilkinson said.

Pam McCombe, a principal investigator on the clinical trials, added: "I am extremely disappointed by this outcome."

Anecdotal evidence from patients receiving the drug had been encouraging, Collins said. But what really matters, he said, are the real test results.

"For every successful drug, there are countess numbers that fail," he said in a statement. "That’s how today’s system works."

Still, Collins didn't sound ready to give up on Innate just yet.

"I am hopeful that Innate’s work will continue to help the individuals and families who suffer from this dreadful disease where, right now, there is no hope," he said.