The rain was a challenge, but hardly a reason to call off the big farewell. Yes, the teachers at Waterfront Elementary School in Buffalo might have to give up on blowing bubbles, which has become a regular part of this rite of June.

But even a steady drizzle couldn't stop them from offering "The Waterfront Wave."

Friday was the last day of classes for public schools in Buffalo, and for many schools throughout Western New York. I went to Waterfront with a question. A half-century ago, when I was a kid, the last day of school had a beauty hard to put into words. I remember the sense of release, of relief, as we took our sweet time walking home after dismissal.

What I recall most powerfully is that first weekday morning of vacation, waking up and for a split-second feeling that tension in my gut, the idea that I had to get dressed and out the door.

Then I'd remember: School was over for two months. I'd roll out of bed and walk to an upstairs window. I'd look down and see my mother, in the yard, hanging clothes on the line.

In life, maybe you never quite repeat the sheer peace and joy of such a moment.

It was a simpler time, a simpler world. In Buffalo, generations later, kids have inherited a cyclone of change. Economic pressures are greater, and it's harder for an adult to stay at home. There are far more summer activities, classes and camps for children. Neighborhoods are sometimes more fractured or transient.

And in a city where two dozen people this year have already died in homicides, young children often deal with worries no kid should ever need to shoulder.

So my question for the boys and girls was simple: In a complicated era, where children often have far more to worry about than we ever did, does the last day of school still offer that same kind of joy?

To be fair, it was a qualified yes. 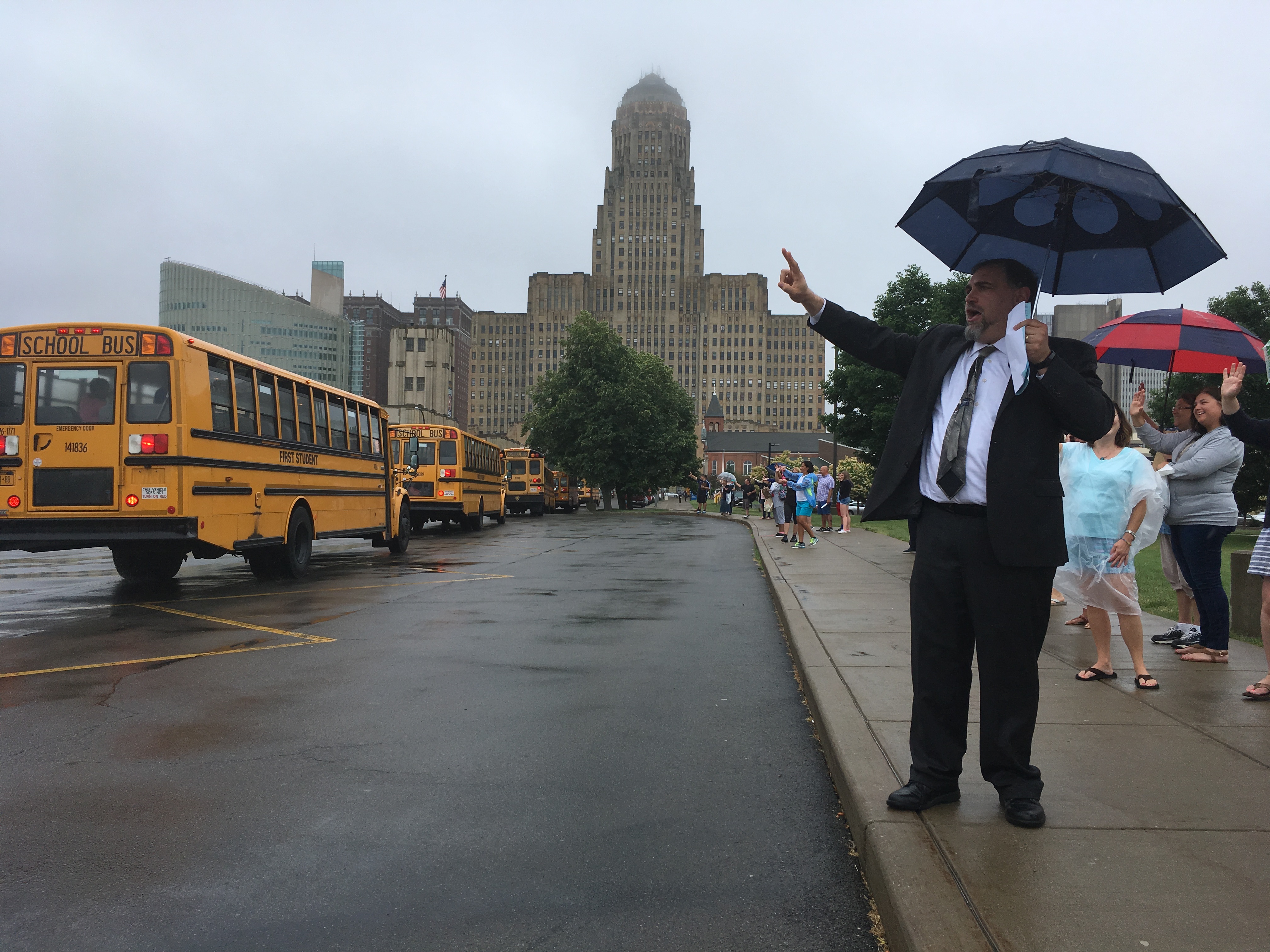 Principal David Hills and teachers and staff from Waterfront Elementary wave goodbye to the children Friday, on the last day of school. (Sean Kirst/Buffalo News)

Some kids, a surprising number, said they roll out of bed early, by choice, even on days off. But Paul Weeden told me he loves to sleep in: Freedom means staying in bed until noon, if he can do it.

To DeWitt Lee, summer still equates to ice cream. His regular choice, whenever possible, is chocolate in a cone, with chocolate sprinkles.

Sure, said Juliana Santiago, the finest part of summer is the same as it was for us. It remains going outside, running around and playing tag, riding your bike, getting a piece of chalk and playing tic-tac-toe on the sidewalk.

It remains finding your own way, through old-school imagination, to savor hours that can move like molasses.

But there were plenty of children who said they would miss school. Ali Fuad Obaid, for instance, said this was the year when he learned about the tilt and movement of the Earth, how we're all on a lifetime journey that annually takes us nearer to the sun, and then farther away from it. It made him see everything in a new way, how there is a reason for why the snow falls when it does and the leaves fall when they do.

That kind of knowledge opened a door in Ali's mind.

He is eager to return for more.

Other children offered a timeless lament. Fatha Omer said the end of school makes her sad. She has close friends she enjoys greeting every day, friends she'll be missing for more than two months, and she is always glad to see her teacher in the morning.

Given the choice – yes, it's true – Fatha would take school over time off. While Moses Bahati said he'll miss playing soccer with his buddy from Waterfront, Abubakar Abanoor, and he looks forward to the chance to kick the ball around again ...

I also heard the hardest truth of all. I told the kids about a powerful childhood memory of summer, how I loved the sounds of the night through a screen window while I sprawled in bed, the song of insects or the distant rumble of a train.

One child responded with visceral surprise and by shaking his head. He said he gets up and locks his bedroom window at night. Too often, he said, he hears gunfire in his neighborhood. The closed window helps stops the noise and makes him feel a little safer.

The boys and girls talked for a long time. They spoke of summer school, for some who need help with their studies. And camps, a chance to learn and have some fun. And swimming, at neighborhood pools or at the beach. And graphic novels, computer games and just plain reading.

And maybe, they said, there'll be some family trips: Darien Lake, Fantasy Island or journeys to see relatives in faraway places, like Cleveland.

Before long, the children had to hustle out. It was almost time for dismissal, and Principal David Hills had a tradition to oversee. Sherry Moore Cruz, a third-grade special education teacher at Waterfront, said she believes the last day ritual has been around since the place opened 41 years ago. Cruz thought it started with Pat Sheffer, the original principal.

The teachers, at the end of the day, lead the children onto 28 buses. Then the entire staff stands in a line in the parking lot, with Buffalo City Hall as a majestic backdrop. As the buses rumble past, the teachers wave and shout and blow bubbles, while the children holler back.

Over the weekend, I called Sheffer, now retired. She was there 40 years ago for the first "last day" in a school building designed by architect Paul Rudolph. She said the "Waterfront Wave," while a beautiful notion, was not her idea.

Hills, who made exactly the same point, said the ritual continues. Even in the steady rain, Hills joined the teachers in the parking lot. Beneath umbrellas, they shouted their farewells. They even tried, with mixed luck, to blow bubbles. The children leaned out the bus windows and offered high-pitched goodbyes, until the final bus was gone and quiet fell over the school. 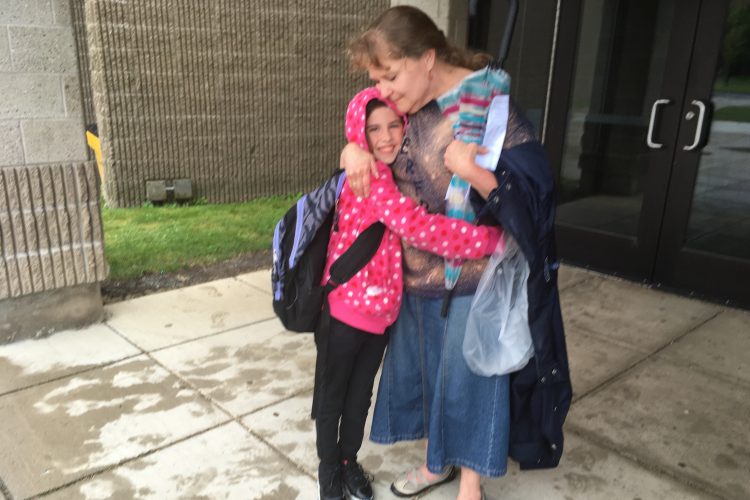 Melody Rodriguez, a third-grader at Waterfront Elementary School in Buffalo, hugs her teacher, Sherry Moore Cruz, on the last day of school, June 23, before heading home for the summer. (Sean Kirst/Buffalo News)

At the front door, Cruz, the veteran teacher, paused to hug Melody Rodriguez, a third-grader who was one of the last children to leave the building.

"What we want them to know," Cruz said, "is that we can't wait until they come back."

Sean Kirst is a columnist with The Buffalo News. He wonders: Did you greet the last day of school with joy or a touch of sadness? Do you have powerful memories of summer vacation, or the last day of school? Email him at skirst@buffnews.com, leave a comment below or read more of his work in this archive.