In 1989, the historic Bank of Buffalo building and its domed roof were carefully taken apart, piece by piece, in a hopeful effort to preserve the granite facade and other decorative elements after the structure was badly damaged.

Located next to the Merchants Mutual Insurance building at the corner of Main and Seneca streets, the vacant bank facility had been badly damaged when demolition crews hired by the city tore down the taller Chamber of Commerce Building next door.

A prominent developer had planned to erect a new high-rise tower, using both properties. The proposed new building was supposed to incorporate the pieces from the Bank of Buffalo edifice, under an agreement between the developer and the city Preservation Board that allowed the bank building to be demolished.

But the new project never came to fruition after several years, and the site instead became a parking lot. Meanwhile, the preserved architectural features were moved to a warehouse, where they have mostly sat in storage until their time comes.

Now, 28 years later, the property at 234 Main has finally changed hands, with Allpro Parking LLC buying it for $1.25 million. It's going to remain a parking lot, under the ownership of Allpro, with no sign of any construction plans.

"Our desire is to continue operating it as a parking lot as it currently is," said Richard Serra, Allpro CEO. 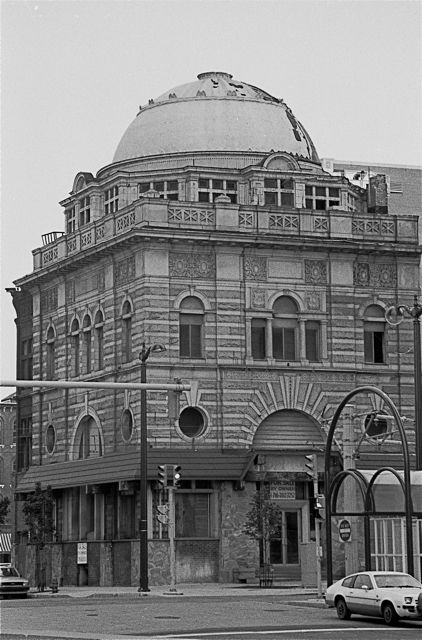 The sale is drawing renewed attention from preservationists focusing on the original "memorandum of understanding" and the plight of the squat historic building that stood in downtown Buffalo for nearly a century. The agreement will be on the agenda of the Preservation Board's next meeting June 29, although it's not clear what action the board could take.

"People fantasize about bringing that building back, but we have not heard about anything concrete to do so in 30 years," said Jessie Fisher, executive director of Preservation Buffalo Niagara. "Wouldn't it be exciting for Buffalo if we did? What a great infill project."

Designed by Robert Williams Gibson, the Bank of Buffalo building was constructed in 1895, at a time when Buffalo was thriving. The Renaissance Revival building featured detailed stonework, carved reliefs, arched entrances and a dome atop an octagonal terra cotta base.

The bank itself was acquired in 1976 and eventually became part of Bank of New York in 1989. By then, it was already vacant, as was its neighbor, the Chamber building, which was acquired in 1981 by a development corporation tied to the city.

Officials spent several years considering options for redeveloping the much taller Chamber building, and received proposals for a "paperless" office building, a mixed-use building and a luxury apartment complex. But the deteriorating condition of the structure forced them to tear it down instead, and then solicit bids for new construction.

Despite efforts to protect both the Merchants Mutual and Bank of Buffalo buildings next door, the demolition damaged the bank's dome, bent parts of the steel frame and cracked the terra cotta skin.

So after much hand-wringing and dueling studies, the developer reached an accord with the city and preservationists: salvage what they could for future use at that site. As pieces of the walls and the terra cotta around the glass dome were taken down, the pieces were meticulously identified and numbered for reassembly later as part of any new project to be built on that property.

Ciminelli retained ownership of the property, which became an 85-space parking lot. It's been managed for years by Allpro – a separate company in which Paul Ciminelli is a part-owner – and Allpro is now buying the parcel, for an undisclosed price. The deal should close by week's end, Serra said.

"If anything is built on the site, they have to incorporate the granite from the building," said Anne Duggan, spokeswoman for Ciminelli Real Estate. "It is stored at one of our warehouse locations, but I don't believe Allpro is going to build anything."

As for the facade pieces, which are included in the sale, they're still in storage, alongside construction equipment and materials, in a Ciminelli-owned facility near Broadway and Bailey Avenue. That's where they will stay, for now.

"We will be maintaining them as they have been throughout their existence," Serra said. "It will be our responsibility."