They had dreamed of seeing Niagara Falls since they were children in Zimbabwe, on the other side of the Atlantic. Last week, while visiting friends in Ohio, James and Sta Maodzwa decided they would make the trip to Niagara.

Accompanied by their nephew Tongai and their 12-year-old son Ngoni, they booked a room at the Holiday Inn and then walked to the falls in the middle of the day. It was beautiful, but buses rumbled behind them and tourist groups pushed up to the railing. The bustle around the brink, the many visitors bumping around as they stretched and shouldered and did their best to take "selfies," made it difficult for the couple to really focus on the natural majesty a few feet away.

After a while, they returned to the hotel, vaguely disappointed. They planned on getting up and driving to Massachusetts in the early morning, but James and Sta looked at each other and changed their minds.

They would make time to see the falls one more time, at dawn. By chance, they awoke in the morning darkness on the day of the summer solstice, when the sun would rise at 5:36 a.m., as early as the sunrise arrives all year. The couple moved softly as they left their hotel room, giving Tongai and Ngoni a chance to sleep a little later, and they walked back to the falls.

Somehow they sensed it:

They had yet to find the soul of Niagara. 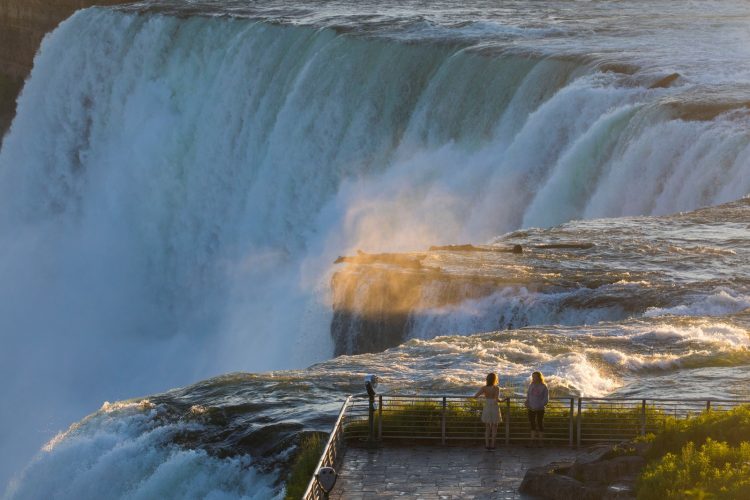 Bethany Shustock and Olivia Kibbe, travelers from Connecticut, timed their journey so they could be at Niagara Falls at dawn. (Derek Gee/The Buffalo News)

The falls have been all over the news in recent days. Erendira Wallenda, an aerialist and an acrobat, hung by her teeth last week beneath a helicopter hovering about 250 feet above the brink. The following day, the body of Kirk Jones – one of the most enigmatic figures in the lore of Niagara – was found 12 miles downriver, apparently killed weeks earlier when he attempted to survive a plunge over the falls in an inflatable ball.

Fourteen years ago, according to police, Jones survived that drop. No one was ever quite sure if he did it as a stunt or as a suicide attempt. That he returned to go ever the edge again – and that his body was found at roughly the same time that Wallenda provided her edgy theater, high above the river – was a reminder of the primal fear and hypnotic attraction of Niagara.

The Maodzwas, from a world away, came in search of something else. On the first day of summer – moments before dawn – they walked onto Goat Island as the growing light turned the rapids above the American Falls into flowing quicksilver. There was no sound of traffic, no shouts from tourists, no slamming doors or rumble of heavy equipment.

At dawn, the falls belonged to Sta and James, alone.

There was only the cry of gulls that spent the night on Terrapin Point, near the point where an entire Great Lake – churning water transformed into what can only be called Niagara green – drops at once, in shock and fury, over a cliff. A few raccoons and squirrels scuttled across the road. As Sta and James walked the trail, they clearly heard for the first time the voice of the falls itself, the great roar unfiltered by the noise of the nearby city.

Finally, the pathway opened and they came upon Terrapin Point. The mist spiraled up. It created what looked like a downpour in the yellow glow of the park streetlights. It was so thick it soaked their clothes and dripped from James' glasses. Behind the wall of trees on Goat Island – a legacy of Frederick Law Olmsted, the 19th century landscape architect who planned the park – the sun began to rise, a burning golden ball, sending bolts of light that shot like green lasers from the woods.

James and Sta, at Terrapin Point, were stunned by all of it. Then the sun, as it climbed, changed the texture of the mist, transforming it from a fist of blurred gray cloud into a kind of radiant pink spiral, the sky above it – at dawn – a mesh of scarlet and deep blue.

In itself, the beauty was overwhelming. But it was only the setup for the gift of every sunrise when the sky is clear, at Niagara:

Above the river, from one side to the other, came a rainbow.

In Zimbabwe, she stays home to care for their children. James is a banker. They have traveled to see Victoria Falls, an African waterfall that at peak drops about 350 feet. In their language, it is called "the smoke that thunders," and they saw some differences from what they discovered on Goat Island.

Yet they did not compare. What is the point, Sta wondered, in comparing two different manifestations of sheer wonder?

"Victoria is Victoria," she said, "and Niagara is Niagara. This is a place we always wanted to go."

What they experienced is a daily miracle, a moment of almost unbearable beauty at Niagara. The rainbow was of such intensity that even plumes of mist seemed to burn in many colors. James honored Olmsted, and his natural philosophy, when he said the entire power of Goat Island is that "you walk out of the bush, and come to this."

He spoke of all the people who go there later in the day, how they "won't ever know what they are missing."

Sean Kirst: A painter, love for beauty honed in factories, on natural vision of Niagara Falls

This was the falls as they had learned as children, in school in Africa, a surge of living water as symbol of the New World, a reason to travel from so far away to view it. As they waited, reluctant to leave such utter beauty, a few other visitors began to arrive.

Bethany Shustock and Olivia Kibbe, a pair of young travelers from Connecticut, were driving to see friends in Michigan. Like the Maodzwas, they sensed the falls would be most beautiful at dawn.

They were not interested in the sightseeing towers, or amusement rides, or casinos. They parked, for free. They walked onto Goat Island, for free.

They watched the birth of a rainbow, for free.

Water from the mist dripped from their hair, like rain. They realized they had witnessed the falls as its true self, a vision they might never see again.

"I'd say," said an awestruck Shustock, "she's a powerful beast."

[PHOTO GALLERY: The beauty of Niagara Falls in winter]

Sean Kirst, a columnist for The Buffalo News, has a question: Have you ever been to Goat Island, at dawn? Email him at skirst@buffnews.com or leave a comment below. You can read more of his work in this archive.