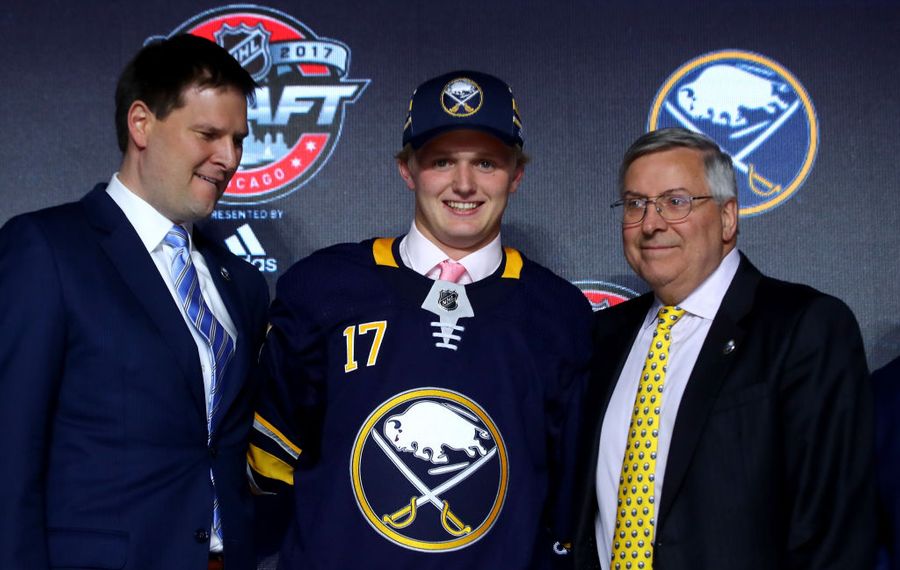 You're not going to like this. That's what the Buffalo Sabres are preaching. Good luck to them.

It's going to be a tough thing to ask for this season, with the restlessness of the paying customers clearly bubbling. But there's an organizational reset going on, so Jason Botterill and Phil Housley are going to hammer that point home.

Fans have to understand it and deal with it. And, truth be told, the media is going to have to be receptive to the idea too. Full disclosure from this corner: We'll see how long that lasts.

It was a strange weekend in the Windy City. The Sabres made no trades at all, even as Botterill pointed out Friday his phone had been glued to his ear the last six weeks. There were no NHL defensemen acquired. No assets landed for Evander Kane, who provided the most entertainment of the last two days with his devilishly clever emoji tweets.

Now, you can never truly gauge the NHL draft. In stock market terms, these are almost all futures. This isn't the NFL, where your fifth-round pick can become a starter this season. That's just not how it works.

Want a sobering prediction? Other than first-rounder Casey Mittelstadt, it's not likely we see any of these six draftees with the Sabres before the 2019-20 season. Maybe later.

After chaotic two months, Sabres get chance to be a team again

And there will be no immediate help from the surprise top choice. Mittelstadt is going to the University of Minnesota for at least one season and maybe two. That's how hockey works. Don't get fooled by Connor McDavid, Austin Matthews and Jack Eichel. Other than picks in the top-5, few make the NHL in year one.

So it's hard to offer in-depth analysis of players almost no one but the team's scouts have seen. Botterill knows this franchise hasn't been to the playoffs in six years or won a single playoff series in a decade. But he's going on a slow roll here. There will be no more damning of the torpedos and full speed ahead.

Fair enough. I don't think for a second Botterill was taking a shot at predecessor Tim Murray, veiled or otherwise. He was simply stating his philosophy. Botterill likes college players. Fourth-rounder Jacob Bryson (Providence) is already there with Mittelstadt and seventh-rounder Linus Weissbach (Wisconsin) en route in the fall. Botterill was OK with projects and he sure got some of those too.

The Sabres went completely off any board known to man other than their own with third-round pick Oskari Laaksonen, who wasn't listed on any rankings by NHL's Central Scouting Service. That happens with low-round choices all the time. Can't recall ever seeing that on a top-100 pick in the third round, who tweeted to fans after his pick that he had grown to a whole 154 pounds.

But Botterill said his scouts were adamant about Laaksonen's offensive creativity. Head amateur man Jeff Crisp said the player has been watched for two years.

"Our European scouts really wanted to stand up and get a player into the organization. If you don't step up and take a player you may not get him," Botterill said. "They sort won us over ... You have to trust your scouts in this situation and we're excited to have him."

"I wouldn't say he flew under the radar," insisted Crisp, a veteran of more than a decade with Anaheim who inherited his position when Greg Royce was shown the door along with Murray. "He wasn't under the radar for us and that was the most important thing."

Rounds 3-4: Sabres go off the board for two defensemen

The Sabres, remember, had to trade a third-rounder to get Dan Bylsma from Pittsburgh in 2015. You wonder about this one too. It was a bizarre pick, far too much of an outlier for an organization in need.

With the first pick in the sixth round (No. 156), Colorado took Russian forward Denis Smirnov, who led NCAA freshmen in scoring last season with 47 points. At Penn State. As in Terry Pegula's team. Seemed like a weird guy to ignore.

Botterill said he'll be watching the Nittany Lions closely because they're with a burgeoning program, not just the owner's team. It sure seemed like another missed opportunity.

But quibbling about picks in the NHL Draft is a tough sport. The real work is still at hand. The Sabres need more help on defense. It remains hard to see how trading Kane will be good for a club already offensively challenged, but it seems like he's going.

Botterill said Housley, who did not meet the media, has spoken to Kane and all the players but the GM said he's only "texted back and forth" with his leading returning goal scorer. Seems like there's not much relationship-building going on there.

In the coming days, there will be an assistant GM hired, a coach for the Rochester Amerks and assistant coaches for Housley also brought on board. But it's still about Botterill and what immediate help he can bring.

Patience is fine and the long-term prism is likely the best bet at the draft. As for free agency, Botterill noted there's "not as much of that big bang" on July 1. He's looking for "value and depth."

Botterill is going to take things slow. It's a measured approach, much more like Darcy Regier than Murray. You have to trust the results of his work in Pittsburgh. We all better settle in.

Mike Harrington: With lots of needs on all sides, Sabres stay down the middle