Richard A. Metcalf Sr. has waited four and a half years for the criminal justice system to address the homicide that took his son's life in November 2012.

"Obviously, the whole process has been very tedious, very frustrating and very painful to my wife and myself," Metcalf said.

"It doesn't get any easier."

A breakthrough may be near. An outside district attorney says she is close to announcing a decision on whether charges might be lodged in the death of Richard A. Metcalf Jr., who was pronounced dead three days after entering the Erie County Holding Center. He was 35.

But aside from saying she would likely call a Buffalo-area news conference to make her statement, Cattaraugus County District Attorney Lori Pettit Rieman refused to indicate what she will do in the matter or exactly when she will announce it.

Rieman was brought into the case in February. A judge asked her to review the facts because the state agency that investigates deaths in New York's jails and prisons found Metcalf did not die of a heart attack, as the medical examiner at the time concluded.

He was asphyxiated by Sheriff Timothy B. Howard's jail deputies, the state Commission of Correction said in a report that became public last October.

The Commission of Correction urged the Erie County district attorney to consider criminal charges. But the county's top prosecutor in 2016, Acting DA Michael J. Flaherty Jr., did not carry out the recommendation, in part because his office had a conflict of interest. One of its prosecutors is the wife of a Holding Center sergeant involved in the episode.

During last year's campaign season, DA-candidate John J. Flynn Jr. said he had taken notice of the commission's report and believed Metcalf's death should be reviewed again to see if charges should be lodged, as the state agency recommended. Yet the conflict of interest still existed when Flynn took office in January.

Throughout, no prosecutor has ever contacted Richard Metcalf Sr. to keep him in the loop, he said.

"It's almost like we were the enemy," he said. "I am not looking for compassion from them, just a professional manner to recognize that I am a taxpaying citizen, and to acknowledge that we exist."

It's difficult to determine what Rieman has done to reach a decision. But it appears she has not talked to the famed forensic pathologist whose second look at the autopsy report and other evidence led the Commission of Correction to say Metcalf died from a lack of oxygen – largely because jail deputies tied a spit mask too tightly around his neck.

Dr. Michael M. Baden's participation in some of the nation's most high-profile death investigations, and his role hosting a long-running television show about the science used in his field, have made him almost a household name. Baden reviewed Metcalf's death as a member of the commission's Medical Review Board, and he would likely be called to testify in a criminal trial.

He told The News last week that no one from the Cattaraugus County District Attorney's Office has contacted him about the matter.

Richard Metcalf Sr. said that if he never sees charges lodged against Holding Center deputies, he expects the truth will come out in a lawsuit that has been filed in his name against Erie County and nine jail personnel. Lawyers pressing the lawsuit have compiled documents, depositions and videos, among other things.

All of it was offered to Rieman, said one of the attorneys, Thomas J. Casey of Amherst. But the legal team never received a response to its letter, Casey said.

Rieman also has the findings of a lengthy State Police investigation, which the Commission of Correction relied on heavily.

The Commission of Correction's conclusions bolstered the allegations contained in the lawsuit. Metcalf did not die of a heart attack that occurred after he had been rolled into an ambulance and driven to a hospital, as jail officials first tried to say. His airway had been choked off by deputies who violated jail rules as they dealt with the inmate, the commission said.

Holding Center video of inmate doesn't back up deputies' claims

Metcalf, a store clerk, had never been diagnosed with a mental illness, but he was acting bizarrely in the run-up to his death. He broke into a Depew restaurant to cool down in its walk-in refrigerator, odd considering the near-freezing temperatures common during that week in November 2012. Depew police said he came at them with a wrench, and they hit him twice with a Taser in order to arrest him and eventually get him to the Holding Center – on Nov. 27, 2012.

Documents indicate he was making strange remarks and had smeared feces on himself. But the dangerous sequence that led to his death began late on Nov. 28, 2012, when he reportedly was raking his arm with a plastic fork,  hurting himself on his cell's bars and repeating the word "radioactive." A team of jail deputies rushed into his cell, took control of him and hustled him in handcuffs to the jail infirmary, where he reportedly was spitting blood.

Someone retrieved a spit mask and tied its strings tightly around his neck, according to the commission's report. When Metcalf chewed through the mask, someone then placed a pillow case over his head, while keeping remnants of the spit mask in place. Depositions completed for the civil suit indicate deputies kept Metcalf  face down on an examining table to await the ambulance that would take him to Erie County Medical Center for a psychiatric evaluation.

The commission said jail deputies did at least four things wrong as they tried to keep Metcalf from spitting blood in their direction: Pillow cases are not to be placed over someone's head because they can hinder breathing; spit masks are to be used with "restraint chairs," which allow an inmate's torso to remain upright; they are to be tied behind the head, not around the neck; and the manufacturer's instructions say  they are not be used with an inmate spitting up blood. 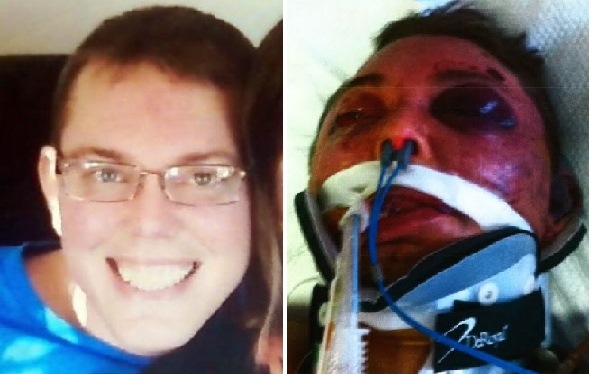 Richard Metcalf Jr. died at Erie County Medical Center after being removed from the Erie County Holding Center, where a state agency says Metcalf was suffocated by jail deputies who improperly restrained him.

Under the pillowcase, Metcalf could not breathe, the commission said. The medics who arrived were not allowed to examine him until they rolled him through a hallway and into an elevator which they took to the ground floor and then rolled him into a bay where the ambulance was parked. The medics said the jail deputies insisted Metcalf remain face down throughout the journey, which made it harder for him to breathe.

With Metcalf finally inside the vehicle, the medics removed the pillow case to find the spit mask. The commission said it had been tied so tight around his neck, one of the medics could barely squeeze a finger under the strings to cut it free. But when it was removed, the medic saw Metcalf's cherry red face. There was no pulse and no respiration.

The patient was rushed to Buffalo General Medical Center because it was the closest hospital. He was later transferred to ECMC, where life support was ended on Nov. 30, 2012.

While the medical examiner at the time concluded Metcalf died of a heart attack, she still ruled the death a homicide – at the hands of others – because “multiple blunt force injuries with associated stress” contributed to his demise. Then-Medical Examiner Dianne R. Vertes noted several bruises around Metcalf's body, especially on his torso.

Then-District Attorney Frank A. Sedita III, saying the State Police report did not recommend a criminal prosecution, never presented the case to a grand jury.

"I think if we go back to when this all happened, it has been four and a half years," Richard Metcalf Sr. said.

In that span of time, he and his wife, Jane, went through a second tragedy.

He said their son Jeff had always been close to his older brother, Richard.

Jeff Metcalf was 32 and working in California as a massage therapist when the Commission of Correction report came out last October. No one knows why he did it, but Jeff took his own life soon after. He died on Oct. 31, his father said.

"Not only did this affect my wife and I ... but obviously it crushed his brother, too."