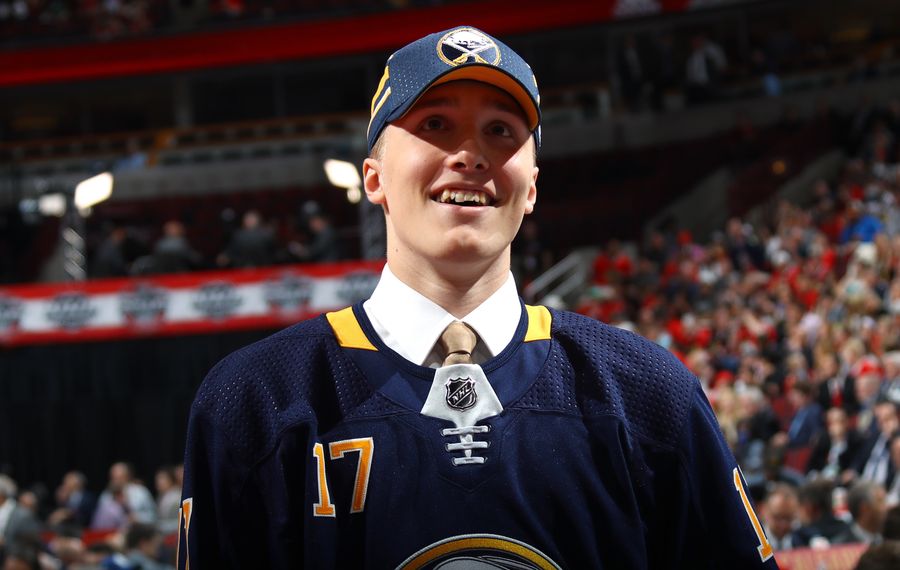 CHICAGO – In the ideal scenario, Buffalo was going to draft a goaltender. The situation Saturday wasn’t only ideal; it was tops.

The Sabres used a second-round selection on Finland’s Ukka-Pekka Luukkonen. He was the top-ranked European goalie prospect, according to NHL Central Scouting, after leading his junior team to the league championship.

Though he’s one to three years from coming to North America, Luukkonen adds depth and talent to an organization that needed it, especially after being spurned by Cal Petersen.

The Sabres are getting a goalie who’s been strapping on the pads since he could walk. He went straight to the net when he started playing street hockey, and he stayed in the crease as soon as there was ice under his feet.

“My older brother was a goalie,” Luukkonen said. “My older cousin, he was a goalie. It’s maybe in the family a little bit, but I also liked to watch the goalie gear, the pads, the gloves. It was just great for me.”

He's thrilled to be a Sabre.

The 6-foot-4, 198-pounder admires Finnish countryman Pekka Rinne of Nashville. Both had postseason success this year.

After recording a .916 save percentage and 1.78 goals-against average during the regular season, Luukkonen led HPK Jr. to the league title. He also backstopped Finland to the gold medal in the 2016 under-18 world championship, where he was named to the all-tournament team. He earned a silver at this year’s under-18 tournament.

NHL Central Scouting says his rebound control is excellent, as his butterfly style.

“There’s a lot of times it’s more like butterfly style, but still I like to play standing up,” Luukkonen said. “I would say I’m pretty calm. There’s no problem for me to be the goalie and play in big situations or be in big situations.”

He noticed that trait in a fellow Finn and member of the Sabres. Rasmus Ristolainen scored the gold medal-winning goal in overtime at the 2014 world junior tournament.

“The whole Finland went crazy, so I wasn’t the only one who went crazy there,” Luukkonen said. “It tells about him. He has the confidence to make those plays. It was just great.”

While the goalie is looking forward to meeting Ristolainen at training camp, they won’t be teammates for a few years. Luukkonen has more to prove at home.