Jason Mendola and his wife, Abbi, became interested in kayaking about a decade ago during a trip to Central America.

“We were on an excursion in Guatemala. We were kayaking and wondered, ‘How come we’ve never done this at home?’ When I came back, I did what everybody else does: went to a sporting goods store, bought the cheapest boat imaginable, got out on the Buffalo River near the silos and said, ‘Oh my God, this is amazing – but this boat stinks.’”

Despite the bumpy start, Mendola was hooked. He went on to help manage Bflo Harbor Kayak after it opened in Canalside and became a certified kayak instructor. Then, a few years ago, he met Beth Bragg on a hiking excursion and struck up a conversation. They realized they had a shared interest in the outdoors, grain elevators and local history.

“He was already into kayaking, too, and I got into it,” Bragg said. “My family’s been in Western New York since the early 1800s. I’m totally nerdy about it and can trace my third great-grandparents coming to Buffalo on the Erie Canal.”

A little over two years ago, the two launched their own business, Elevator Alley Kayak Tours (elevatoralleykayak.com).

This is the third season they’ve rented kayaks and led tours, and the second year they’ve had their business at The Barrel Factory, 65 Vandalia St., in the Old First Ward. Mendola pulls the kayak trailer with his Jeep, and leads group tours, most of them out of nearby Mutual Riverfront Park, which has a kayak launch. Bragg handles some of the tours, store rentals and the business side. They also sell kayaks, Stand Up Paddleboards and accessories.

They can work full time on weekends alone.

Mendola, 44, also is a video camera operator with Spectrum cable news. He and his wife, a funeral director at Lombardo Funeral Home, had their first child, Alessandra, seven months ago.

Bragg, 48, who grew up in the Southtowns, worked the last 20 years as a computer specialist at Marine Midland, Independent Health and HSBC, and left HSBC last July to focus on building the kayak business.

The paddle company owners talked this week about the best ways to dip your toe into kayaking.

“It takes a few minutes to start,” Mendola said, “and a lifetime to master.”

Q. Why a kayaking business? 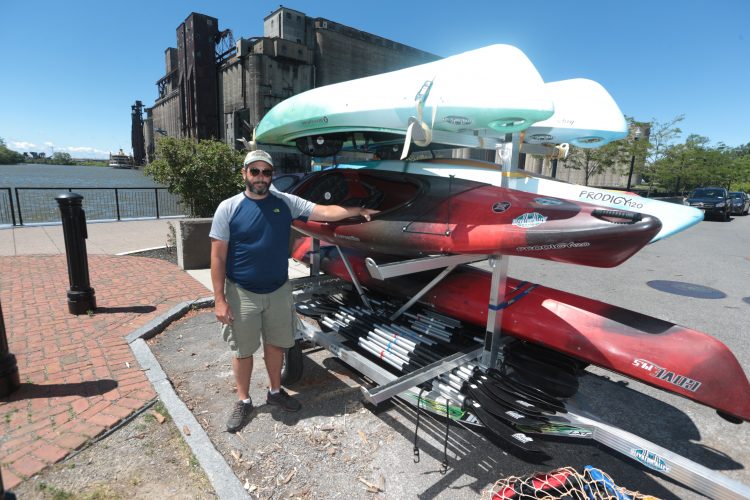 Jason Mendola, a co-owner of Elevator Alley Kayak Tours, usually leads tours out of Mutual Riverfront Park at the foot of Hamburg Street, a block from his shop. The park has a kayak launch. (John Hickey/Buffalo News).

Mendola: I like to trick myself into working out, whether it's playing Frisbee golf, hiking, bicycling. And kayaking is awesome. Who doesn't like being on water? It's accessible. It's affordable. I can't even afford the gas to put in one of those big boats, let alone own one of the big boats.

Bragg: I grew up in South Wales, near a branch of Cazenovia Creek, but we have a family cottage on Cayuga Lake where I've spent at least some time every summer of my life. We were in rowboats but always on the water, so this is a natural fit.

Q. What are the key components of your business?

Mendola: We do tours through Explore Buffalo Saturday and Sunday mornings at 9, Wednesday evenings at 6, and Friday sunset tours. They're $40 (including a rental kayak). When there are Bisons' games, they do a Friday Night Bash and we do fireworks tours. They're $45 and are pretty unique. We stress safety and carry lights on the kayaks and on every life vest, in case somebody becomes separated. We also rent kayaks. We charge $25 for two hours. One hour is really not enough time. Kayaking is not a rush sport. I want people to go out, enjoy it, relax, see more of the Buffalo River, and not worry about watching their watch.

Bragg: We also encourage other group outings. If a workplace team wants to come out for a guided tour, or just rent, we're getting more into that.

Q. How do you stress safety?

Mendola: We keep tour groups small. We usually max out at 12. One of us trained in rescues and group management goes out on the tours with one of the history experts who are competent paddlers. We give basic safety instruction before we go out on tours, or with rentals. If it's really windy or the weather isn't appropriate, we don't go out. We can give gift certificates or reschedule…

I always recommend safety classes, if nothing else to be able to self-rescue. You can also practice rescue with a partner and that's why we recommend always going kayaking with a buddy. Nine people died in kayak mishaps on the Great Lakes last year, including two in Western New York.

We also discourage alcohol use. If you're out there drinking and register a 0.08 alcohol content, it's still drinking while driving and you can be charged. I've had people argue with me that there is no law on the water. I tell them, 'Go ask the Buffalo Police, the Coast Guard and the Sheriff's Office (which all patrol the Buffalo River and harbor). Some people don't realize it, but it goes on your driver's license, too.

Q. Why is it a good idea to try a kayak before you buy?

Mendola: You might want thigh or knee braces (on the kayak). ... The most common thing is overloading. I don't recommend buying anything less than a 10-footer, and usually I recommend something a little bigger. Usually, your pocketbook dictates that. I relate it to bicycling. If you're 250 pounds, you're not going to buy a tricycle or a kid's bike. If you take care of a kayak, they should last you at least 10, 20 years, so it's worth investing an extra $100, $200.

Mendola: A 12- to 13-foot recreational boat. They're very stable. The bottom is, relatively speaking, flat. It's pretty deep. It's about 29 inches wide, where some kayaks are 22, 23 inches. The ones we rent generally retail for about $759 and have some extra features. … You can expect to pay about $100 more for every 2 feet longer.

Q. What do you say about the rules of the river?

Mendola: We tell people that bigger boats go in the middle and little boats stay off to the side. It takes those bigger boats a long time stop. And it's like crossing a crosswalk. You have the right of way but if a big semi is coming, you're going to let common sense let that driver go. It might be a good idea to try kayaking in the river for the first time during the week when there's less traffic on the water. We don't rent late on Thursdays because of the Canalside concerts, which end after dark and create problems being seen.

Bragg: If you do have to cross, we recommend you go straight across and not diagonally.

Q. What are you favorite places to kayak?

Mendola: Costa Rica. Locally, one of my favorites is starting in the Buffalo River at Harlem Road. I call it paddling through history. You start near where (Charles E.) Burchfield did his best paintings and you're in the wild. You can go past Tifft Nature Preserve and see whitetail deer. It's cool to be in the city and see all this nature. Then you can go past Silo City and start seeing old piers, old development, old bridges, grain elevators. It's about six miles. I also like going out to Strawberry Island off the southern tip of Grand Island. It's a little more secluded.

Bragg: I'm an amateur photographer. I like Cayuga Lake but in this area I like to take my camera and go up the Buffalo River, like Jason said.