None of the eight Ewing children, who lie with their young mother in a plot in Oakwood Cemetery in Niagara Falls, lived to age 10 before losing their lives to a toxic mix of poverty, greed and callous indifference.

Yet their deaths, along with those of seven other children and two adults in a fire that ripped through a condemned former hotel, changed the city in which they lived.

The Ewings – Mary, 27, and her children, Howard, 9; Horace Jr., 8; Arlene, 6; Belinda, 4; Gloria Jean, 3; Terry and Jerry, both 1; and Bonnie Patricia, 2 months – have now joined the Whitneys, the Porters and other local pioneers, industrialists, daredevils and military commanders among Oakwood's Notable Persons.

The deaths of the 18 people focused attention on the city's responsibility to ensure safe housing for the large families whose parents flocked to the city to work. 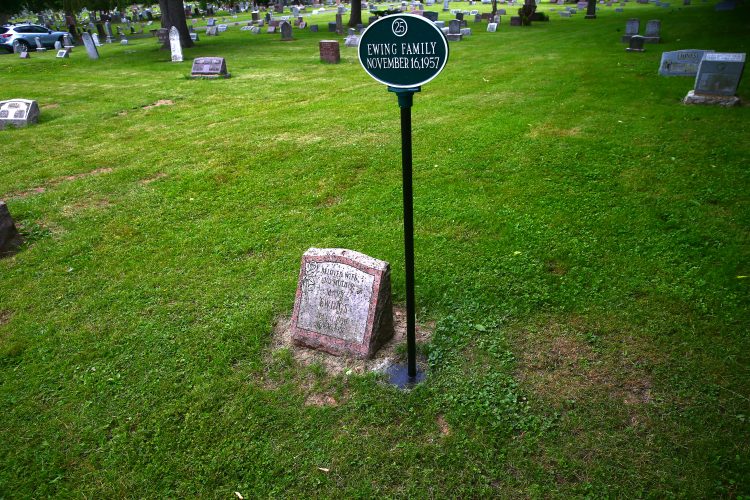 A small metal plaque marks the Oakwood Cemetery grave of the Ewing family, a young mother and her eight children who died in the Moonglow Hotel fire on Nov. 16, 1957. The family members, who were among 18 people who died in the fire, have been named Notable Persons at Oakwood because of the impact their deaths had on the city. (John Hickey/Buffalo News)

This month, in a ceremony that also honored a renowned local historian and a Revolutionary War soldier, the Ewing family's modest grave was marked with a metal plaque. The story of the tragedy that claimed their short lives and changed Niagara Falls will be included in the cemetery's pamphlet on the notables.

"It's important to remember this because it was a turning point for Niagara Falls," said said William Bradberry, a local historian, chairman of the Niagara Falls Underground Railroad Heritage Area Commission and longtime municipal employee. On the day of the fire, Bradberry, age 9, lived with his family at 2417 Allen Ave., some 350 feet away from the Moonglow Hotel. He had played in the streets with the Ewing and Reid children.

After the horrific fire, "People could no longer deny reality," said Bradberry. "It was after the fire that the housing authority began to take seriously the need to do slum clearance."

The story of the Ewing and Reid families resembled that of thousands of African-Americans who came to Niagara Falls from the Deep South seeking opportunities and freedom. Horace Ewing, who was seriously injured but narrowly survived the inferno that claimed his family, was born in 1922 in Pigeon Creek, Ala., where the Reids also were living.

The Reid family moved to Niagara Falls in 1948, said Annie L. Chivers of North Carolina, who was the youngest survivor of the fire that devastated her family. Like many workers from the South, her father brought his family north in 1948 and settled into Hyde Park Village at Hyde Park Boulevard at Highland Avenue, a public housing project that was built as temporary housing during World War II.

In her 2013 book, "Out of the Fire: Life From the Ashes," Chivers wrote that the apartments were roach-infested, with paper-thin walls, although they did have electricity and indoor plumbing. Bradberry recalled dirt floors and outhouses in some of the units he saw as a child.

"Hyde Park Village was eventually condemned and nobody thought about where the people would go," said Bradberry. "Most people found someplace to go, but those with the least means and the largest families had very few choices. In Niagara Falls, they had one choice, which was the Moonglow Hotel, which had already been condemned. It was not much better than Hyde Park Village, but it was November, it was cold, they had to be indoors, that is where they wound up," he said.

"Sometimes it seemed as if the poor of the housing projects (most of whom were black) were invisible," Chivers said in her book.

The Reids moved into the Moonglow, a rundown three-story building, in November of 1956. There was no heat in the building, which had already been condemned, but the landlord, William Dietz, rented to several large families that had been denied housing elsewhere. Sanford Reid said later that he had paid Dietz $64 a month rent but eventually stopped paying when the landlord broke his promises to improve conditions. 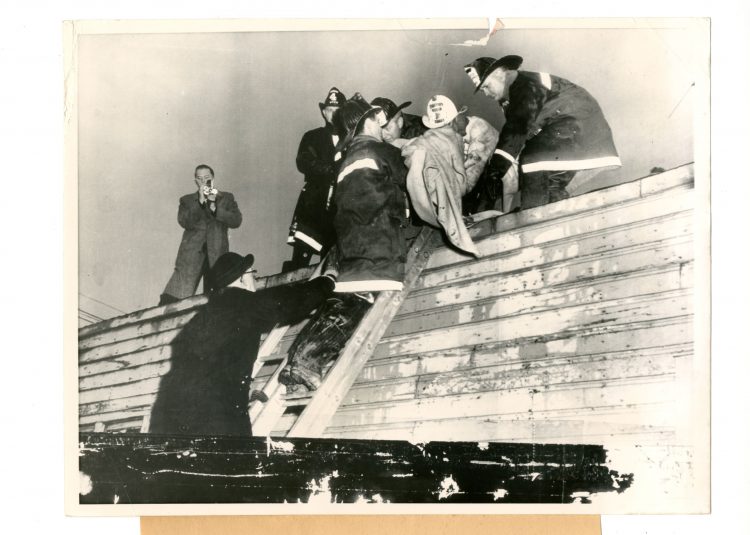 On the night of the fire, Annie was 4 years old. Terrified by the screams and choking smoke, she hid under her baby sister's crib until an older sister yanked her out and dropped her from a second-floor window to safety. Six of her brothers and baby sister died; four of her sisters and a brother survived. The Reid children are buried in Riverdale Cemetery in Lewiston.

Chivers wrote of her siblings, "I want Walter, Herbert, Carson, Harvey, William, Sanford Jr. and Mary Louise to be remembered. I never want them to be just another set of statistics resulting from a tragedy. I want their lives to always matter, even though their lives were so brief."

Because she was so young, Chivers has just a few vivid memories of the fire, including staring up into the flames after she hit the ground outside the building. Although she always knew the basics of the tragedy, in the years to come, her shattered family "would not, did not and could not, many times, talk about it, and I didn't want to open that wound."

So to research her book, she relied on the vivid newspaper stories of the day. She said, "It is overwhelming the way people just opened up their hearts, their homes, their wallets, absolutely amazing, and there was no color barrier. They didn't see 18 black people, just 18 people."

Chivers used the epilogue of her book to discuss some of the good outcomes of the tragedy. "The Niagara Falls Housing Authority made immediate changes to housing regulations, resulting in better housing for the city's poor," she wrote.

And she was right.

On Sunday, the day after the fire, the Niagara Falls Gazette published the first list of the dead and injured. An adjacent headline reported that a city councilman sought "Quick Action to Get Additional Public Housing to Falls." Two days after the fire, the Niagara Falls City Council voted to reconvene the city's Advisory Committee on Housing to study the availability of safe municipal housing, especially for large families.

"Eventually, Packard Court, Centre Court and other more comfortable, safer, cleaner public housing became available for the poor in general, not just for African-Americans," said Bradberry. "That's a good thing, something we should be proud of. We should commemorate the tragedy and remember the good that came out of it."

Gov. W. Averell Harriman called for a quick and through investigation of the fire.

On Dec. 11, 1957, Dietz, 37, a demolition company operator, was indicted on charges of first- and second-degree manslaughter for violating laws that required him to provide safe conditions, including fireproof doors and partitions.

Sanford Reid told reporters that there was no heat in the building and tenants used kerosene heaters, some windows were nailed shut and hallways were crowded with debris. Outside the grand jury room, Dietz blamed the tenants for the cluttered conditions and told a Lockport Union-Sun and Journal reporter that he had been trying to evict them all.

In March 1958, a jury of 10 men and two women convicted Dietz of first-degree manslaughter for “culpable negligence in maintaining the building in violation of multiple housing law." He was sentenced to two to five years in prison, and Chivers said he served about 18 months in Attica and Auburn prisons.

Dietz died on Sept. 26, 1989. In a bizarre side note, two days after his death, two of Dietz's daughters attacked the editor of the Niagara Gazette after the newspaper's obituary included information about Dietz's conviction. The daughters, who used squirt guns to spray ink into the eyes and onto the clothing of the editor, as well as onto furniture and walls of the newspaper office, pleaded guilty to charges of disorderly conduct and harassment on Oct. 4. They were fined $250 each and ordered to pay for the damage.

Although marking the loss of the Ewing family, rather than a single individual, is a first for Oakwood, it fits with the mission of the Notable Persons designations, said Peter Ames, secretary of the board of directors of the cemetery. Ames said he developed the program about five years ago "to celebrate the lives and accomplishments of a select few of our 22,000-plus permanent residents."

"When we started, the stories that begged to be told were of the pioneers and the movers and shakers who had a profound effect on the Power City," he said. "Consequently, we gravitated toward persons from the distant past, as their stories were a major part of our history."

Also honored at this year's commemoration were Jesse Ware, a Revolutionary War soldier who lived in Manchester, later Niagara Falls, in the early 1800s. Ware lived in a house that was built up against the Old Stone Chimney, a piece of historic masonry that has been moved several times and now stands between the river and downtown near the new traffic circle at the end of the Niagara Scenic Parkway.

Orrin E. Dunlap, whose grave also was marked this year, lived from 1861 to 1953. Managing editor of the Niagara Falls Gazette and an avid photographer and historian, he preserved images of and information about many important people and events in local history, including many of the early daredevils, including Annie Taylor and Bobby Leach.

Chivers, who moved from the area in 1978 when she joined the Marine Corps, has returned to visit frequently. Of the seven members of both families who survived the fire, only she and another sister remain. She plans to return home in November to mark the 60th anniversary of the fire and to visit her family's graves.

Through the years, she has told close friends the story of her almost miraculous survival from the Allen Avenue inferno. "I do talk about it," she said. "But even today, 60 years later, I can't talk about it without tears."