Scouts and executives agree on the first two picks for this weekend’s NHL Draft. After that, rankings fluctuate wildly.

That means anything can happen.

“We’ve tried to have discussions with some teams already about moving up and moving back,” said Sabres General Manager Jason Botterill, who owns the No. 8 overall pick. “Because there’s no set one or two players at the top of the draft, you have to be prepared for all outcomes.”

The lack of consensus coupled with a wild draft lottery could lead to interesting moves when teams gather in Chicago. The first six clubs might not like a guy that another organization covets. As names linger or get snatched up, the GMs could act on their urge to hop up or fall back.

The director of NHL Central Scouting expects interesting outcomes as Friday’s first round weaves from No. 5 to 25.

“This draft class, they did not sort themselves out for the scouts,” Dan Marr said. “A lot of teams are going to be quite pleased because there’s 31 different philosophies going into a draft. I wouldn’t be surprised if you heard somebody say we got a guy we had ranked in our top 10 all the way through.”

The uncertainty will force GMs to rely even more heavily on their scouting staffs. Botterill has to trust guys he just met.

“On the amateur side, Jeff Crisp and Kevin Devine have done an amazing job in preparation for it,” Botterill said of the draft. “We feel we’re ready for whatever may materialize.”

If the Sabres hold steady at No. 8, they should have a shot at a puck-moving defenseman or high-scoring winger. Buffalo needs to add both to the organizational depth chart.

“My mindset, especially with a high pick, is always taking the best player available,” Botterill said. “I think drafting for a position in hockey is so difficult. I think maybe it goes on a little more in other sports like football, but in hockey things change so quickly and you’re drafting 18-year-olds. These players are coming four years down the road.”

There are a few prospects who will make the jump earlier, but it won’t be like the past two drafts. Hockey fans got spoiled.

Edmonton’s Connor McDavid and Buffalo’s Jack Eichel grabbed the attention of even the most casual observers in 2015. Last year, Toronto’s Auston Matthews and Winnipeg’s Patrick Laine competed for the top pick and the Calder Trophy as rookie of the year.

Centers Nolan Patrick and Nico Hischier will be the first two players drafted this week, but no one is expecting them to immediately perform like their predecessors. That includes the prospects.

“I don’t expect to come into the NHL and put 40 goals up or score four goals in my first game,” Patrick said, reciting two of Matthews’ eye-popping numbers. “I don’t think that happens very often. I’m just going to try to be my own player and try to contribute.” 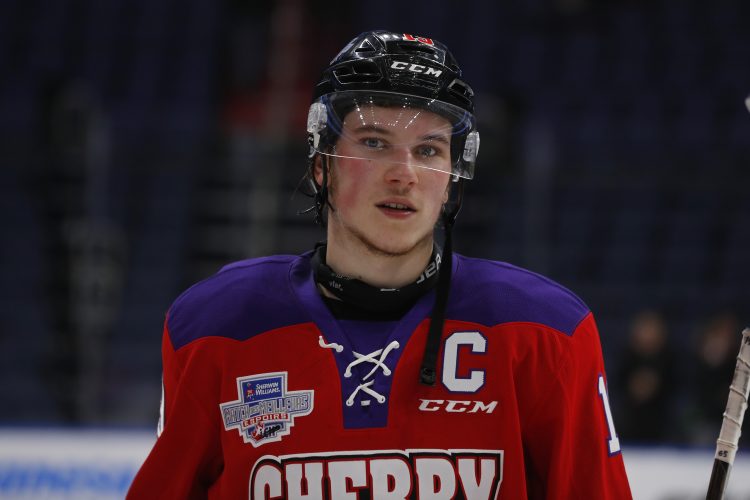 New Jersey owns the first pick and Philadelphia has the second after skyrocketing from No. 13 in the draft lottery. One will get Patrick, a 6-foot-2, 199-pound center who had 20 goals and 46 points in 33 games for Brandon of the Western Hockey League. The other team will get Hischier, a 6-1, 179-pound center. He left the pro league in his native Switzerland to record 38 goals and 86 points in 57 games for Halifax of the Quebec Major Junior Hockey League.

“I don’t want to diminish the product here,” Marr said. “This isn’t a draft where you’re going to have the ‘generational’ – to use that term – players from the last couple classes. They normally come around like once a decade. We were fortunate that we had some back-to-back years that way.

“The players at the top end of this draft are going to be solid franchise players for their clubs once they get established. The rest of the first round will sort themselves out to where they’re going to be really good contributors.”

The top-ranked wingers include Owen Tippett, Eeli Tolvanan and Klim Kostin. Tippett buried 44 goals in 60 games for Mississauga of the Ontario Hockey League, then added 10 more in 20 playoff games. Tolvanen had 30 goals in 52 games for Sioux City of the United States Hockey League. Kostin had an injury-plagued year in Russia, but he scored 35 goals in 33 games earlier in his junior career.

The unpredictability of the draft really shows itself in the defense group. Cale Makar of the Alberta Junior Hockey League could go in the top five. Teams must then sort through Juuso Valimaki (19 goals, 60 points in 60 games for Tri-City of the WHL), Callan Foote (51 assists, 57 points in 71 games for Kelowna of the WHL) and European professionals Miro Heiskanen and Timothy Liljegren.

“A lot of variety, a lot of versatility,” Marr said. “They bring different dimensions to the game, different styles, although their numbers are quite similar. It’s just a different package that you get with each player.”

As the draft unfolds, teams may put together different trade packages to get the guy they want. In addition to the No. 8 selection, the Sabres hold two second-round picks (Nos. 37 and 54) and one each in the third (No. 89), fourth (No. 99) and seventh rounds (No. 192).

The first round starts at 7 p.m. Friday and will be televised by NBCSN. The second through seventh rounds will kick off at 10 a.m. Saturday on NHL Network.

“We always have a good selection of players for the first round,” Marr said. “There’s been a trend to more 19-year-olds being drafted as you go deeper into the draft. But the top of the first round, there’s some pretty solid hockey players."