Last summer’s drought kept the sand and surf at Lake Erie’s beaches the cleanest in five years, so the beaches usually remained open.

But the region's second-wettest spring on record has changed the outlook for this year's swimming season. Beachgoers in 2017 can expect beaches to be closed to swimming more often.

Woodlawn State Park beach has already been closed to swimming more than half the time since opening just before Memorial Day. Swimming at nearby Hamburg Town Park has been closed about a third of the time.

Other places, like Evans and Dunkirk, are embarking on sustainable “green infrastructure” projects to capture stormwater before it reaches Lake Erie.

The state Department of Environmental Conservation funded a pair of studies – at Lake Erie Beach in Evans and Point Gratiot in Dunkirk – to start the process.

“Part of the reason these beaches have been prioritized is because of the number of beach closures over the past few years,” said Shannon Dougherty, the DEC’s western Great Lakes watershed coordinator. 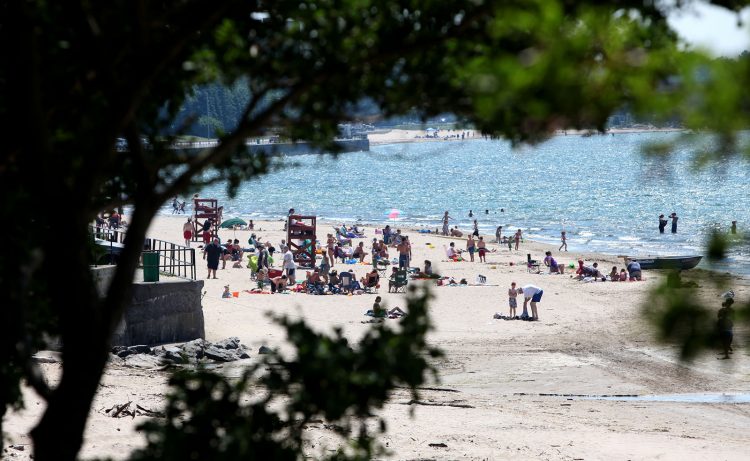 The beach at Wright Park in Dunkirk, where the number of closures dropped significantly in 2016. (Robert Kirkham/News file photo)

Summertime closings at Lake Erie's beaches have been a sign of the times, especially in recent years, after high bacterial levels became commonplace.

The unusually dry spring and summer drove most of that reduction. Buffalo recorded only 6.57 inches of rain between March 1 and June 15, 2016.

Rainfall is one of about three dozen factors the beach forecasting model takes into account when projecting whether a beach is safe for swimming. Local officials depend on the model when making a final decision.

Site-specific measurements of the wind, its direction, wave heights, shoreline currents, water levels on tributaries to the beach, water turbidity and numerous other factors are also taken.

"Each beach has its own data set," said Brett Hayhurst, a water quality specialist at the U.S. Geological Survey's New York Water Science Center in Ithaca.

In Erie County, officials from the county health department also collect daily water samples from the beaches to test bacteria levels and compare them against the model's forecast.

A plan for Evans Town Park

Over the last decade, Evans Town Beach has been closed to swimmers for 176 summer days because of poor water quality.

Designs call for bioswayles drifting into rain gardens in Evans Town Park near the beach, according to Roberta L. Rappoccio, the town's director of planning and community development.

“Why not beautify, be green and serve a purpose?” Rappoccio said.

If successful, the green infrastructure project should alleviate stormwater flows from nearby Fernbrook Creek that often flood the area – including a pedestrian tunnel under Lake Shore Road that joins the park and beach – with up to several feet of water during heavy rain storms.

“We’re getting 25 year storms every year,” Rappoccio said. “That’s something we’re not equipped for.”

Rappoccio said those rain gardens, which will include native plantings, will be designed to capture storm water and slowly filter it before it eventually finds its way a few hundred yards away onto the town beach.

The work is expected to be completed later this year. It is being funded through a federal grant from the EPA.

What’s more, after nearby Mickey Rats’ expected closing at the end of the summer, Rappoccio said the town’s new waterfront design standards will require the use of green infrastructure on any future redevelopment of the site.

“There’s no way to do it otherwise,” she said. “There’s no question about it.”

Projects like this to capture and filter stormwater isn't new to the folks at Buffalo Niagara Riverkeeper, but they're heartened that the message is starting to spread. 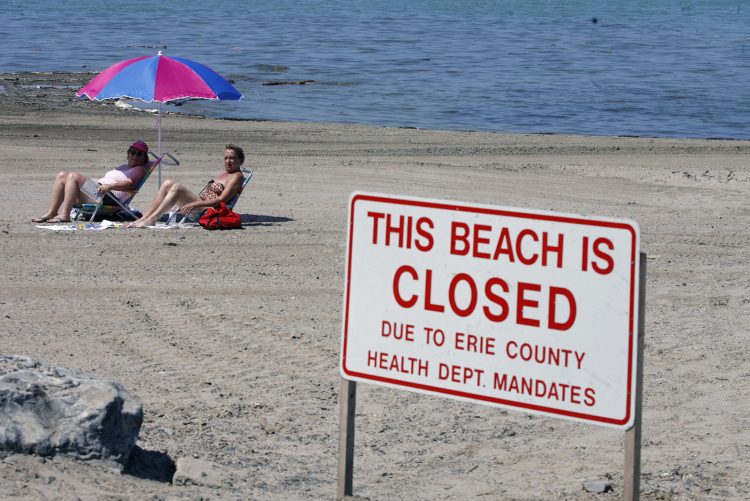 One culprit: aged septic tanks that leak into Muddy Creek from cottages a half-century or more old.

The town spent about $75,000 from a state water quality improvement grant to design a plan to help clean up Lake Erie Beach.

It involves a two-phase approach with native plantings and a wetland area that can capture, slow and filter stormwater before it reaches Lake Erie.

There’s no timetable yet for construction, but the town is actively pursuing funding to complete that work.

“Who knows?” Rappoccio said. “Maybe we’ll be one of the communities where we’ll be known as one of these ‘green tourism’ areas.” 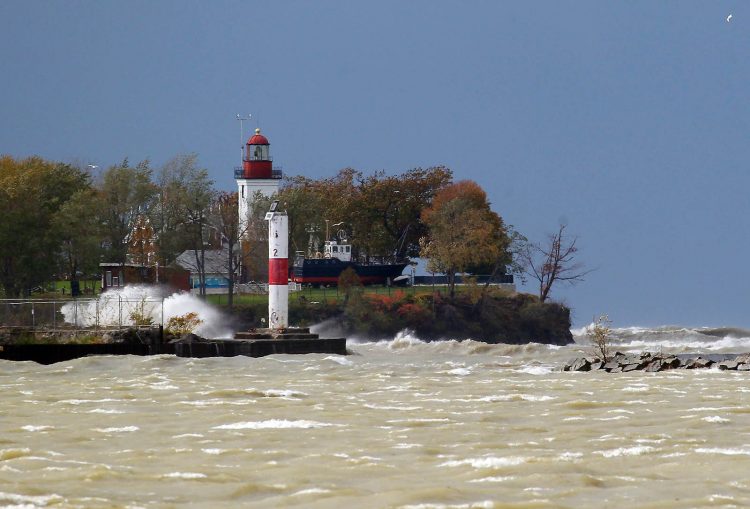 Waves crash into the cliffs below the lighthouse in Dunkirk. (Mark Mulville/News file photo)

Dunkirk’s Rebecca Yanus is directing the city’s efforts to help filter and clean the water at Point Gratiot Park beach.

Like Evans, Dunkirk hopes a series of five strategically placed rain gardens with several native planting areas will help alleviate flooding in the area and run-off onto the beach and into the lake.

“Run-off would come through the rain garden,” Yanus said. “It’s very important we do that at different spots on the property.”

A DEC-funded study shows the rain gardens will be filled with a native bedding stone and surrounded by prairie grass and dozens of spots for native plants like the cardinal flower, black-eyed Susans and purple coneflowers, among others.

Two of the rain gardens – at West Oak Street and Park Drive – will come with accompanying bioswales.

That will help defray additional construction costs for the project, which is estimated to be about $140,000.

Point Gratiot has fewer closures than most spots closer to Buffalo, but it remains in the double-digits for each year dating back to 2010, according to EPA data. The highest – 28 closures – came in 2010 and 2013.

Dunkirk officials hope the DEC’s involvement in the early part of the process bodes well when the city applies to the agency this summer for a grant to fund the project. If funded, work would be done in 2018, Yanus said.

“We’re hoping it will bring our water quality up to par so many more people can enjoy our beach,” she said.

A big project at Woodlawn 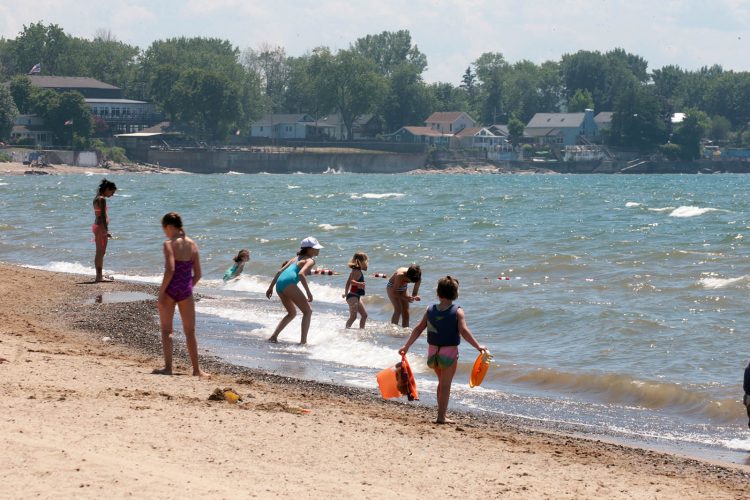 At Woodlawn State Park, where there’s more pavement and more runoff than at rural parks, cleaning the water will take a lot more than a rain garden or two.

“It made it possible for us to eliminate the Blasdell Treatment Plant there, pump stations and those overflows,” said Joseph Fiegl, Erie County’s deputy commissioner for the Division of Sewerage Management.

Since Nov. 19, there have been no overflows from the traditionally problematic pump stations at Electric Avenue, Blasdell and Labelle, even with some of the extreme weather this spring.

Even so, it’s been of small consolation for Woodlawn’s beachgoers this spring.

The beach was closed for six straight days over the Memorial Day holiday – from May 28 to June 2 – and has been closed five more times since June 5, according to Nowcast beach data.

"This is a watershed issue,” he said.