Ilio DiPaolo's is a family restaurant in the fullest sense of the term. Run by a family to feed families, its menu goes past the usual catalog of Italian-American appetizers, pastas and seafood to consider the needs of your entire extended clan.

Here, the kids menu is not a perfunctory exercise in chicken fingers and fries, but an array of classic juvenile choices, down to a kiddie cocktail ($2.99). On the other end of the age spectrum, a seniors-satisfying early bird specials offer dinner for two as early as 3 p.m. ($26.99).

The familial nature of the Hamburg restaurant was underscored during my visit for dinner when the proprietor stopped by each table to ask after our satisfaction.

With a strong nose and broad chin, Dennis DiPaolo looks quite a bit like his father Ilio, the former professional wrestler-turned-restaurateur whose portraits adorn the walls. 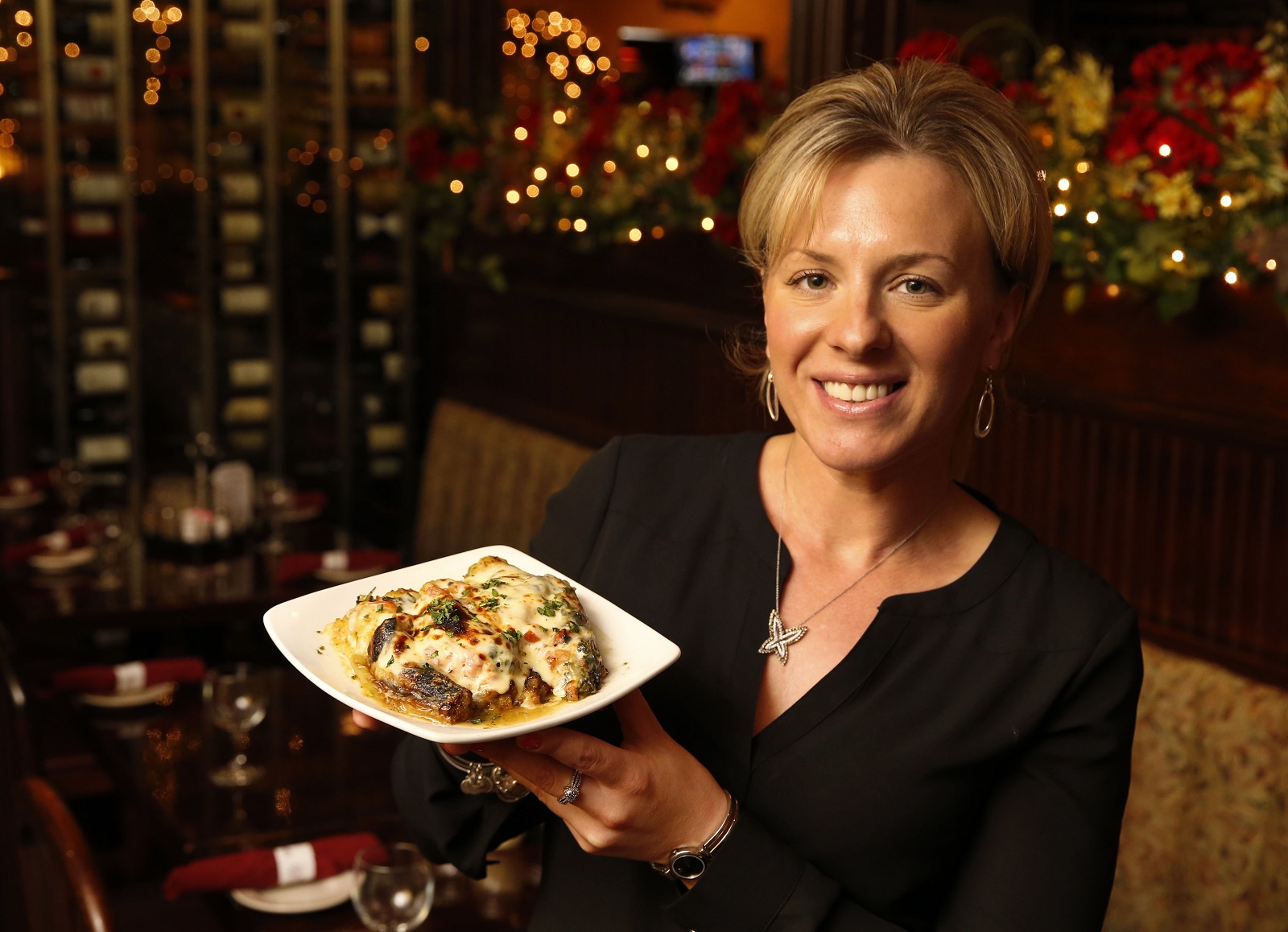 Ilio DiPaolo’s is a restaurant that will especially appeal to those fond of Sinatra hits, artificial flowers and murals of Italian landscapes. As we settled into a table, our server cheerfully acquainted us with the specials listed on a table card, and left to gather drinks. When a glass of wine turned out to be vinegary, she replaced it swiftly.

Appetizers made a good first impression. Crumb-coated zucchini fingers ($8.99) made sure we got some green vegetable with our fried snacks. They came with the evening's first dose of tomato sauce, a full-bodied red with a touch of sweetness.

Tripe ($11.99), simmered in more sauce, was agreeably tender and funky. My only tripe gripe is that there wasn't more in the appetizer bowl. Fried calamari ($11.99), crumbed like the zucchini, was cut in strips and tentacles. The crustacean bites were extra-firm but avoided vulcanized territory. 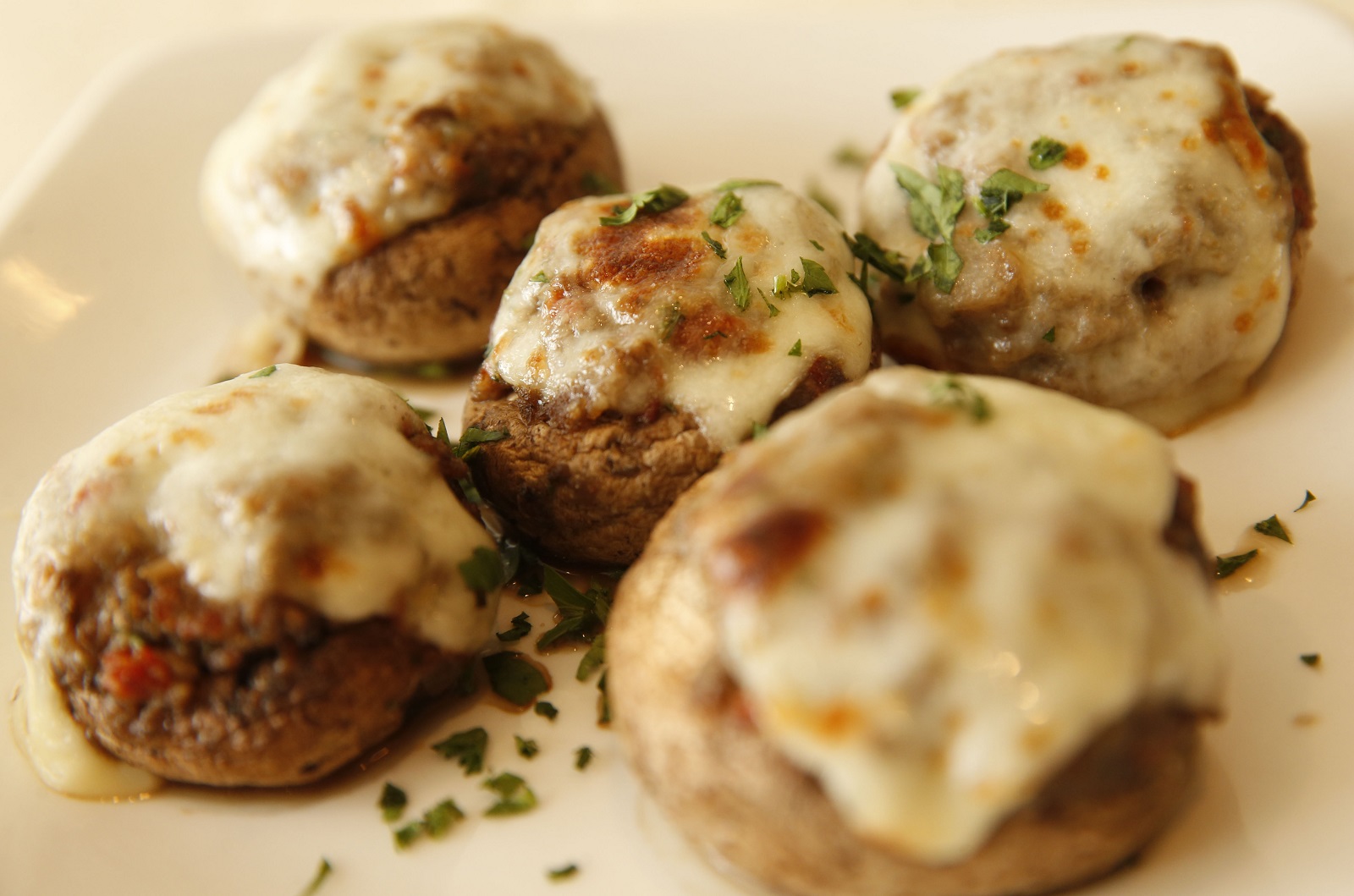 Stuffed mushrooms are filled with sausage and bread stuffing then baked with white wine and mozzarella cheese. (Sharon Cantillon/Buffalo News)

Six stuffed mushrooms ($9.99) were filled with an Italian sausage mixture that smacked of fennel, and burnished with briefly bruleed cheese caps. We said bravo.

The starters stepped off the beaten path with stuffed peppers Colleen-style ($11.99). A pair of peppers filled with cheesy breadcrumbs and sausage crumbs were topped with marinated diced tomatoes, spinach and a thick quilt of mozzarella. The result was a juicy snack that bit back. 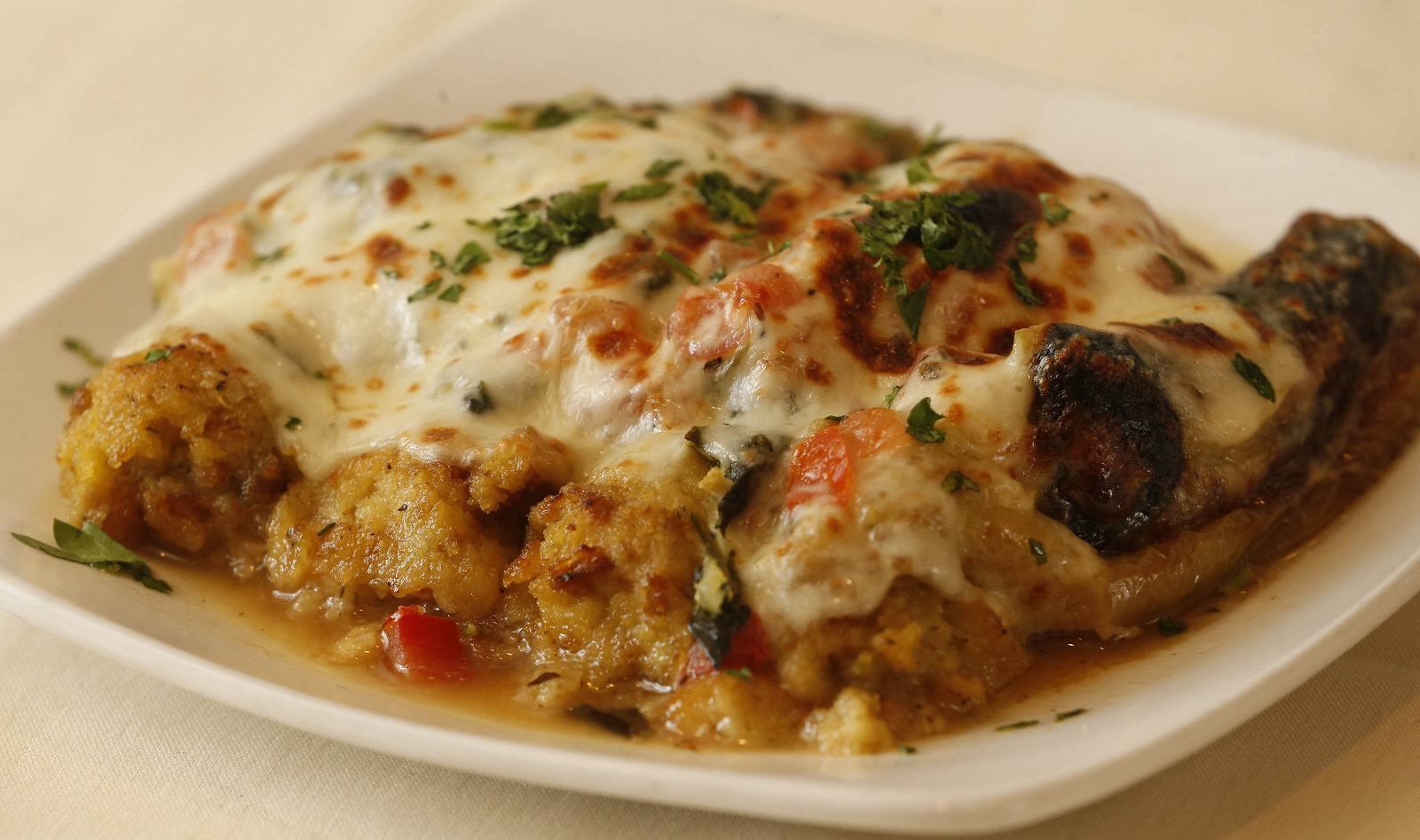 Since entrees come with soup and salad, we explored our options. The house minestrone vegetable soup, chockablock with carrots, celery, kidney beans and more, was a homey satisfaction. Turkey and rice hit the spot with poultry that was still tender instead of stiff cubes.

I didn’t take to the French onion ($1.50 upcharge), which tasted most like toast from the crouton. Not unpleasant, but not what I want from my French onion.

The house salad was minimalist, with a lettuce blend, chickpeas and croutons. 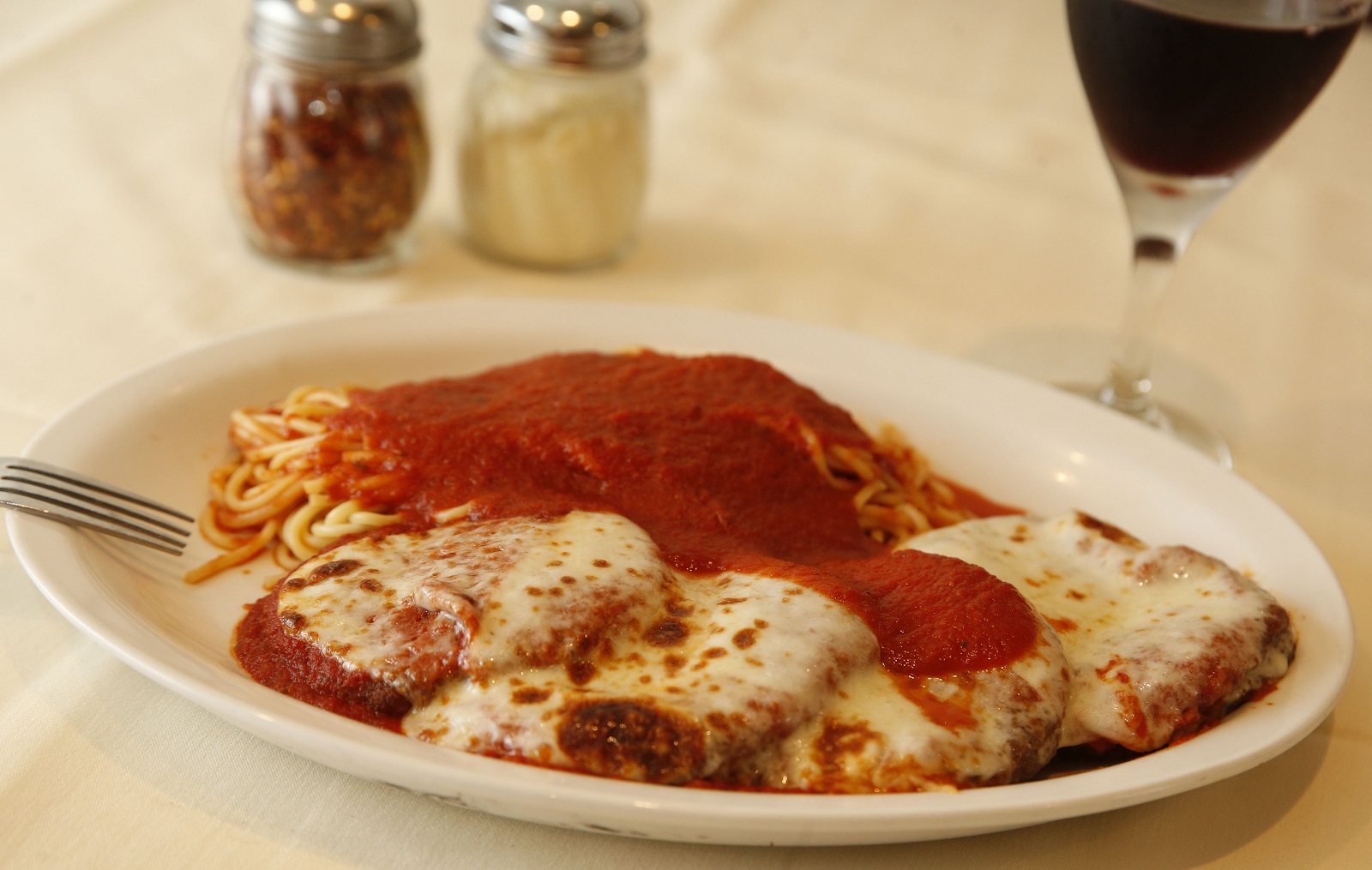 The eggplant eggplant parmesan comes with mozzarella and Ilio's house sauce with a side of spaghetti. (Sharon Cantillon/Buffalo News)

When entrees arrived after a suitable interval, they provoked a variety of reactions. The eggplant parmesan ($15.99) was one of the best I've had in town. Crispy-crumb-coated slices of eggplant were judiciously adorned with tomato sauce and cheese, allowing the faintly bitter eggplant flavor to shine through the richness and fruity tomato sauce.

Veal Marsala ($19.99) presented tender meat cutlets and quartered mushrooms in a sauce whose wine swamped the savoriness of its bordelaise. The Alfredo sauce on the side of fettuccine lacked cheesiness, but the shaker on the table remedied that.

A pasta special of shrimp and sausage with sun-dried tomatoes in a spicy Alfredo cream ($20.99) was outstanding, my favorite pasta so far this year. The saute had lent a smoky depth to the sauce that made it compulsively edible. I looked for bread to soak up the chile-flecked sauce that pooled under the linguine, then shrugged and just started using my spoon. 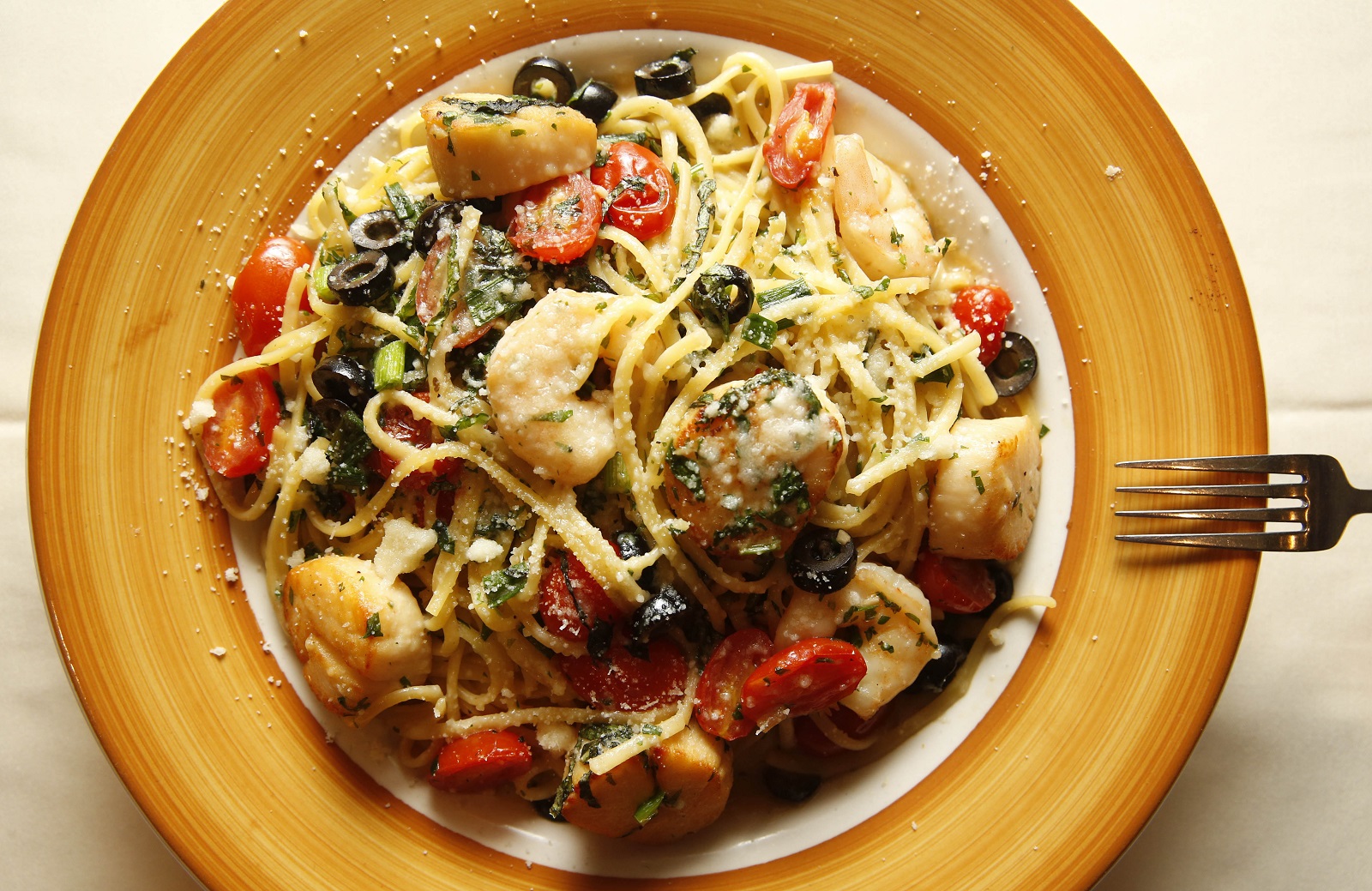 The flavor of grilled swordfish ($18.99) was enhanced by vinaigrette marinade but its ride on the grill left it a notch too chewy. Pork chops in sriracha glaze ($18.99), two slices of boneless loin, were an offbeat delight. The pork still had a touch of pink, avoiding dryness, and the sweet-spicy glaze kept it interesting.

DiPaolo's is not from the guaranteed-leftovers school of Italian-American dining, but it doesn’t skimp, either. So consider saving room for dessert. 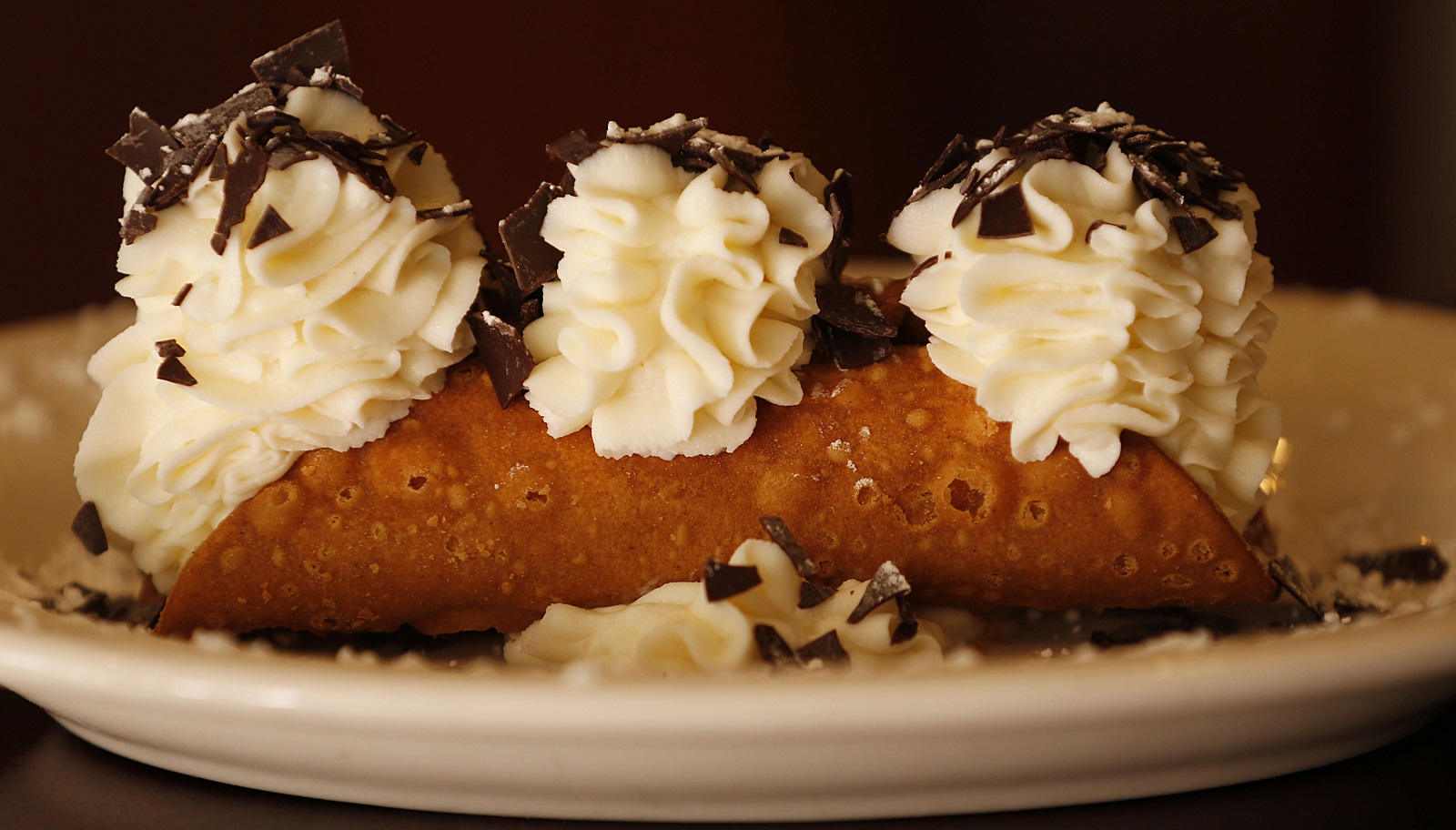 A vanilla-bean cheesecake ($5.99) was surprisingly light but still lush. Tartufo limoncello ($4.99), refreshing lemon gelato with a creamy lemon liqueur center, was lightest of all.

More than half a century into its run, Ilio DiPaolo's still offers a solid lineup of Italian-American classics. It also offers a personal touch from a polished staff of servers intent on welcoming you to the family. Stepping inside for the first time felt like entering a village where you arrive a stranger, but don’t stay one for long. 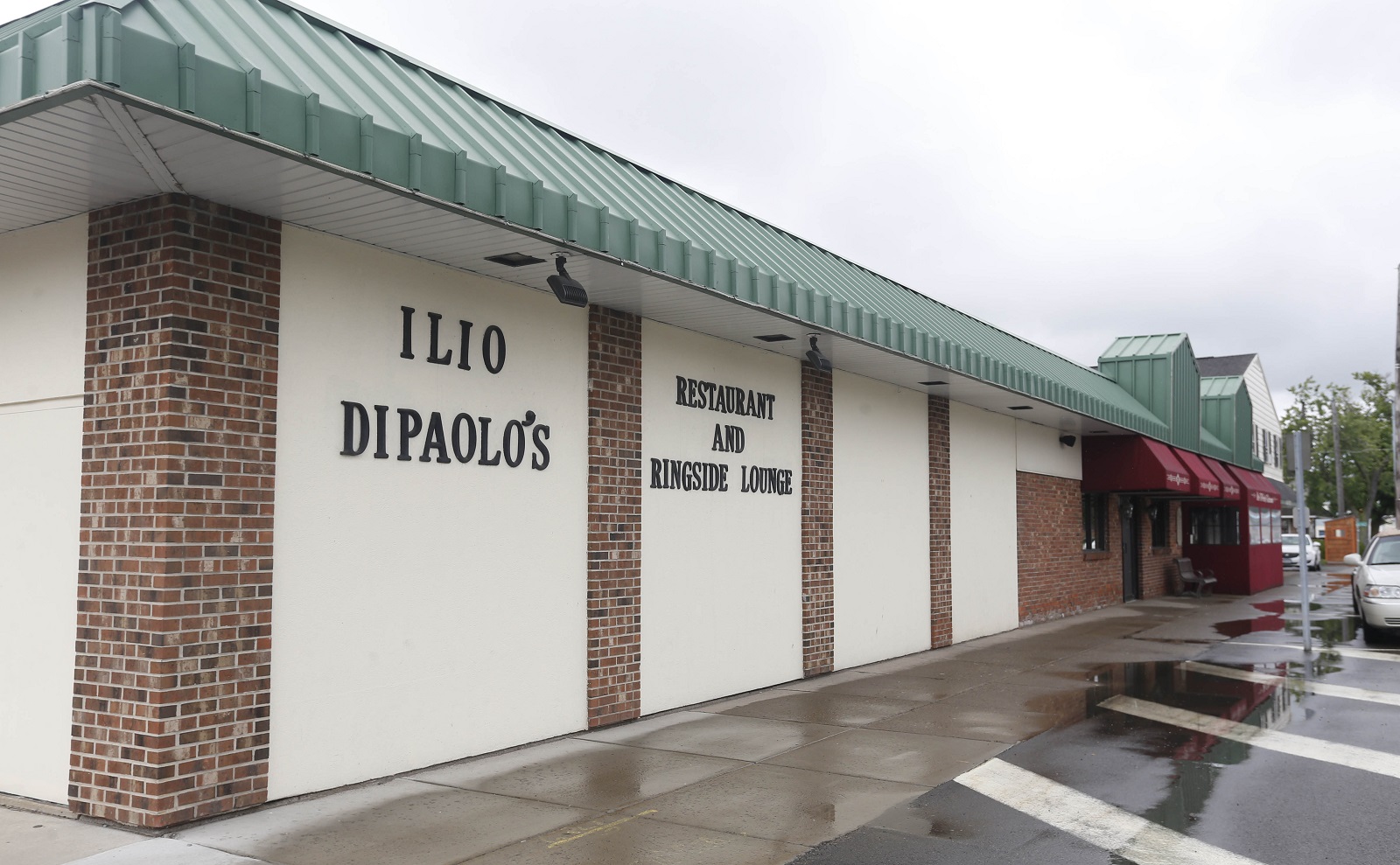 Ilio DiPaolo's Restaurant & Ringside Lounge is at 3785 South Park Ave. in Blasdell. The restaurant was founded by famous professional wrestler Ilio DiPaolo and his wife Ethel, in 1965, after his athletic retirement. It began as a pizzeria and has expanded many times over the years. (Sharon Cantillon/Buffalo News)