NIAGARA FALLS – It was minutes after 8 a.m. when Nik Wallenda was on the roof of the Seneca Niagara Casino’s parking garage, tinkering around the helicopter that would soon be dangling his wife over Niagara Falls.

Erendira Wallenda walked onto the roof, dressed in stretchy black exercise pants and a matching jacket. She looked like she was heading to a yoga class; she was actually heading for the lyra – the hoop that would hang from the helicopter. Soon, Erendira would be suspended in the air, contorting herself around that lyra, hanging by her toes, and by her teeth, too.

Niagara Falls would be 300 feet below, a distance that would set a Guinness world record for the teeth-clenching stunt.

But first, as Erendira walked onto the roof, before the chopper’s blades were spinning, Nik had something to do. Better than anyone around, he knew what his wife was about to face on this cloudy, rain-prone Thursday morning. Five years earlier on this date – June 15, 2012 – he made worldwide news by crossing the falls on a high wire. He understood the cling of the mist, the whip of the winds, the view of the gorge. He knew that wearing a safety harness – which he was commanded to do, and so was she – was more distraction than comfort.

Wallenda understood this feat; in fact, he admitted it was a little hard for him to not be the one doing it today. As Erendira walked up to him, he had every reason to wrap her in his arms.

“Come over here,” he said to Erendira, leading her to the middle of the concrete surface, where a large bank of media awaited. “Let me give you hugs for the cameras.”

And so they embraced.

Nik and Erendira Wallenda embrace for the cameras before heading to the helicopter to perform Erendira's dangerous stunt over Niagara Falls on Thursday, June 15, 2017. (John Hickey/Buffalo News)

“You know what’s funny?” Wallenda said later that morning, after Erendira had successfully completed her falls feat. “I’m almost working as the publicist today rather than being the star.”

It’s a temporary dynamic, and it’s almost true. He's never not the star. The Wallendas, led by Nik, will be headlining the Big Apple Circus, which opens in New York City this fall and then embarks on a national tour. But as the family's two days in Niagara Falls this week showed, Nik can be more than just the celebrity frontman.

By the skin of her teeth, Erendira Wallenda conquers Niagara Falls

Both Wallendas are experienced performers who are in their mid-30s and have trained in their circus families since their diaper years. But Nik, by personality and by necessity, is the chattier of the two when facing a horde of cameras. Years ago, he realized that building a daredevil-next-door brand would be good for business. So he began talking openly about his crazy, death-taunting wire-walking profession, and about his three kids, his faith, and his family’s long and sometimes tragic circus history. He developed a sharp skill for networking with politicians, deep-pocketed business executives, and using the media as a tool.

It’s a strategic and successful approach that was on full display Thursday in Niagara Falls. After the hug, Wallenda allowed the cameras to capture his conversation with Erendira in the helicopter as they did a final check on how her custom-fitted mouthpiece would attached to a carabiner, which in turn would be latched to the lyra. He encouraged the media to gather in close to film the preflight prayer circle he led with this family (minus 19-year-old son Yanni, who is graduating Friday from Marine Corps basic training in South Carolina). 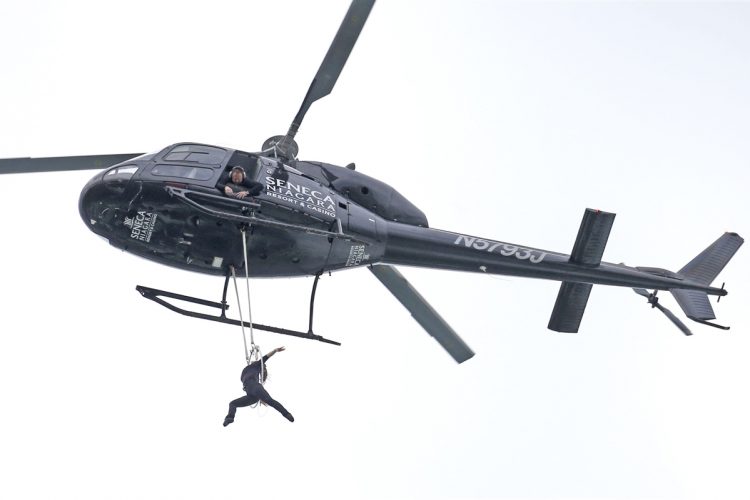 Erendira Wallenda hangs by her teeth from a helicopter while hovering 300 feet over Niagara Falls. (Robert Kirkham/Buffalo News)

After the flight, Nik and Erendira accepted proclamations from the Niagara County Legislature. He talked about his desire to make Niagara Falls his family’s “backyard” every summer by opening a permanent Wallenda theater and family-entertainment center in the city, because he knows somebody with the money to help him make it happen might just be listening or reading.

“Do something unique, that’s unusual, that’s never been done before, and here’s the great place to do it,” said Wallenda, who lives in Florida. “They’ve got plenty over there –” the Canadian side of the Falls – “family entertainment centers, haunted houses, indoor water parks, stuff like that. You’ve got to do something different over here.”

Wallenda wrestled, too, with when to talk and when to not. The subject of this event was Erendira; he knew that, and kept questioning where and how he should place himself.

“I always stand by her side because it builds her confidence,” he said. “Sometimes I’m like, ‘Should I go away and let her do this?’ But I know that she’s more comfortable and if she gets nervous, I can bail her out quickly.”

Some Wallenda spectators not sure what they saw over Niagara Falls

On the day before the stunt, the Wallendas sat outside the Seneca Niagara Casino and talked about the psychology of a circus performer. In his autobiography, “Balance,” Nik wrote, “You can’t be a circus performer and not have a big ego. It goes with the territory. My forebears all had giant-sized egos. Each of them yearned for greater fame and immortality.”

Asked about her own sense of ego, Erendira, who also comes from a circus family that dates back centuries, said, “It’s kind of like circus royalty. Yeah, everybody has an ego. Do I think I’m the greatest aerialist ever? Absolutely not. I love what I do and I feel fortunate that I’m able to do it. I never go out thinking I’m the best at anything, but I’m always looking for ways to improve my skill.”

Then she looked at Nik, whom she always calls “Nikolas,” and raised her eyes playfully. “I don’t think I’m as full of myself as my husband!”

She was joking about reality – but not fabricating a joke.

In his book, which was published in 2013, Wallenda wrote about a pivotal dialogue he had years earlier with his wife.

Erendira told him, “I am willing to go on this ride, as long as you remember it’s our ride, not just yours.”

That conversation came shortly after his Walk Across America, a time when he was working intensely to build his brand. As Wallenda traveled the country doing wire walks from city to city, he had a tunnel-vision focus. He was networking, giving interviews – all the same things he does now, but with less…

In a room full of people, he would forget to introduce his wife and kids. On live radio – at least one time, which is described in his book – Wallenda cracked a joke that Erendira felt a dad and husband should not make.

“That’s where the balance part came from,” Wallenda said in Niagara Falls. “I just kind of put my family on the back burner.”

Meanwhile, he said, Erendira “made huge sacrifices and put her career, in a sense, on the back burner to raise the kids while I pursued mine.”

His career strategy worked: Through a combination of high-wire skill and a highly wired business sense, Wallenda has arguably become the best-known performer in his profession. His visibility and sense of business and political dynamics have given him the ability secure permits and permissions, such as the ones that allowed Erendira to perform on Thursday, that others may not be able to get.

“Now she can do something really cool,” he said, “and she can be in the spotlight.”

He's still more in that glare that she is; that will likely always be. But the ride that Erendira wanted to be theirs, not just his, now includes them both. The Falls event was the Wallendas' grandest-ever that featured Erendira in the lead. That doesn't necessarily make it transformative in their relationship, nor is it specifically what she was seeking when she reminded her husband to make it "our ride." But it is another step for a couple who share a supreme sense of confidence, and a relentless belief that they can always do something better.

"He’s gotten better, and I’ve gotten more mature,” said Erendira, pointing out that they got married young, when she was only 18. “We just understand each other more.”

If you really want to know what happened over Niagara Falls when Erendira clenched her teeth and let go, it is this simple: You saw the Wallendas learning how to balance.

For the Wallendas, the stunts are the easy part of life