Here's a look at the back of the Bills-esque commemorative sweater: 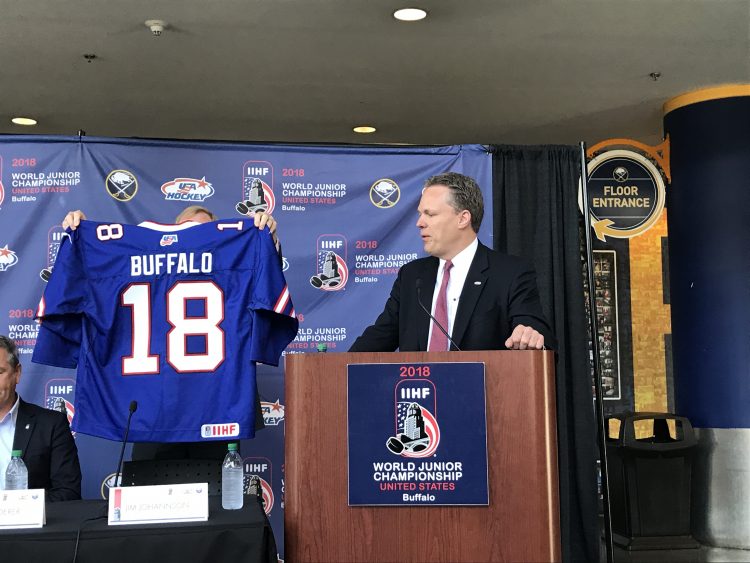 USA Hockey's Jim Johannson shows off the jersey in the KeyBank Center.

The tournament will run Dec. 26-Jan. 5, with games in the KeyBank Center and HarborCenter.

"It's the second time in the history of the IIHF that we have this game in a stadium," said Hannes Ederer, IIHF deputy general secretary. "In total we have the opportunity to break the record for the world junior attendance ... we can, we could, we should aim for that."

This year, some notable names taking place include Brady Tkachuk, Quinn Hughes and Joel Farabee. USA Hockey assistant executive director of operations Jim Johannson estimated 8-11 future first-round picks will be on the ice for the game.

"The players will tell the story, both from the game and the history it's gonna bring," Johannson said. "There were 10 first-rounders on the ice for that game in 2015.

"I think the unique part of this event are that kids are still coming from all over the country," he added. "I'll make a prediction right now that you'll see 18-20 states [represented] at the game."

Tickets go on sale for the game on Aug. 16. Prices are $5 for season-ticket holders and $10 for the general public.

"It'll be exciting times for everybody," said Mike Bertsch, USA Hockey assistant executive director of marketing, communications and events. "I think everybody's come to understand the talent that's on the ice for this game. ... We've had some outstanding players in the past who have participated in this game."

Sabres VP of administration Michael Gilbert also announced two new ticket packages on top of the full 31-game package currently available. Fans will be able to purchase eight-game and 12-game packages starting at 10 a.m. on June 23 through BuffaloWorldJuniors.com and the Sabres' box office. On June 22, there will be a pre-sale on the packages for USA Hockey members, Sabres and Bills season-ticket holders and My One Buffalo members.