David Seay has been alive for 57 years, but he’s lived through more arrests than birthdays. He spent a recent Sunday night lying on a blue mattress in the Erie County Holding Center's detoxification unit, covered in night sweats.

Alcohol and an illicit mix of prescription pills contributed to his latest stint in jail for felony assault and criminal mischief, he says. He approaches a bolted-down table and glances across his jailhouse digs with bleary brown eyes. A thin, angry cut, courtesy of his wife, mars his weathered, left cheek.

Chances are good he won’t stay that way. Thousands of inmates like him each year stay clean behind bars, but the county correctional system doesn't link them to any addiction treatment once they are released from the downtown Holding Center or the Erie County Correctional Facility in Alden.

“We have nothing we can do for them,” said Erie County Sheriff Timothy B. Howard.

But local correctional health officials hope a new program can help more inmates recover. The Erie County Legislature is considering funding for one or more additional employees who would ensure that inmates interested in staying clean after their release can receive the medical assistance and counseling to do so.

Nearly 42 percent of the 15,700 inmates at the Holding Center last year came addicted to drugs and went through detox – 40 percent of men and 48 percent of women, according to corrections supervisors who oversee the medical program. The percentage has roughly doubled since 2013, when jail administrators started tracking the numbers.

Inmates are forced to dry out in the detox unit, where they get health checks three times a day until they are considered stable enough to join the general inmate population. But once they're out of jail, they're on their own. 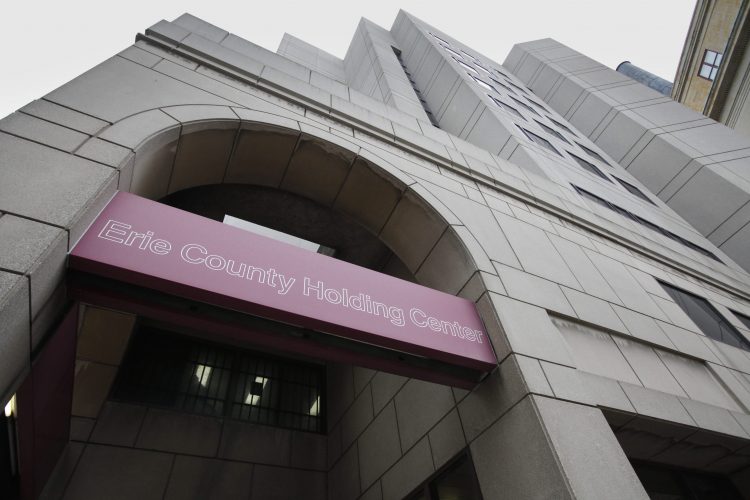 Inevitably, many former inmates like Seay return to their drug habits and to the crimes that previously landed them in jail. Aside from alcohol, Seay has fed his addiction with prescription drugs like Klonopin, Lortab and Xanax.

People like him remain a threat to public safety and security, and they create a financial drain on court, police and correctional facility resources, Howard said.

But that could change.

Seay has heard about the proposed new program to link recovering addicts with treatment once they are released from custody.

He likes it. After rattling off his arrest record like letters of the alphabet, he considers the path his life might have taken if such a program had been available to him the first time he landed here roughly 40 years ago.

“It would have been different,” he said.

No one joins the Holding Center population without a medical evaluation. Separating addicts from the rest of the inmates is routine business.

Reardon, during a recent tour of the Holding Center, starts on the first floor and points to the dark, narrow garage where all inmates enter the jail at 10 Delaware Ave. The first stop is the pat-down room where inmates face the wall and get frisked before passing through a metal detector. Officers consider the tiny space the most dangerous room in the building – hence the cushioned gym mats tacked up on three of the four walls. 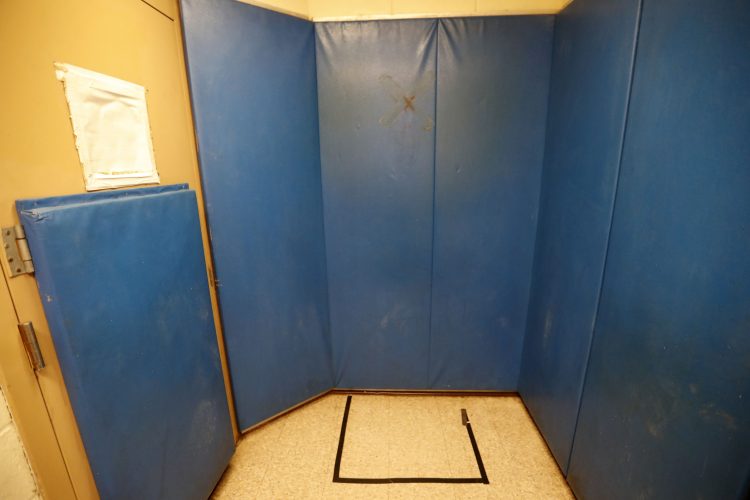 The pat-down room at the Erie County Holding Center is considered the "most dangerous room" in the building for officers. (Mark Mulville/Buffalo News)

The next stop takes inmates to one of several intake rooms, glass-paneled holding tanks where they remain until officers call them to process their paperwork, take their pictures and issue coded wristbands.

An elevator ride to the second floor then takes inmates to another “medical reception” holding room with spare steel benches. Inmates remain here until they can be seen by a nurse in one of two small exam rooms. Nurses ask about their medical and drug history and crosscheck any prescriptions with inmates’ doctors, pharmacies and state databases. 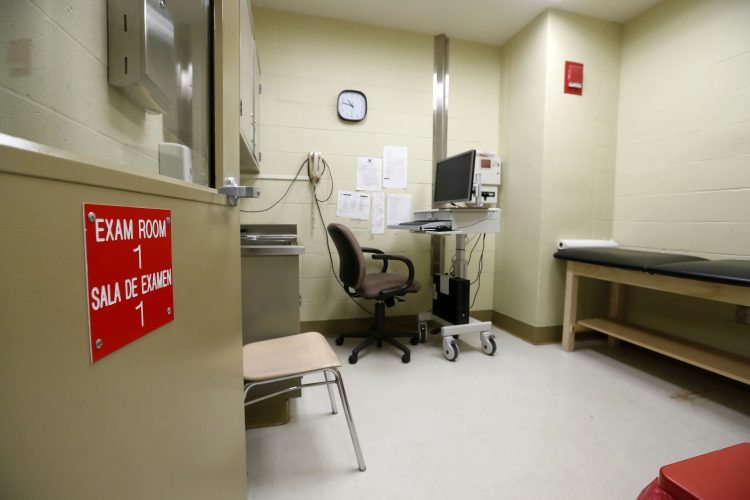 An exam room where new prisoners are checked for addiction. (Mark Mulville/Buffalo News)

In a bright and roomy 38-bed unit, blue fixed bed foundations sit spaced in even rows while a cluster of orange-clad inmates sit at a metal picnic table farthest from the door and corrections officers.

Seay considered the room though the lens of his newfound sobriety.

“This is new to me,” he said, recalling past Holding Center stays. “This was the gym.” 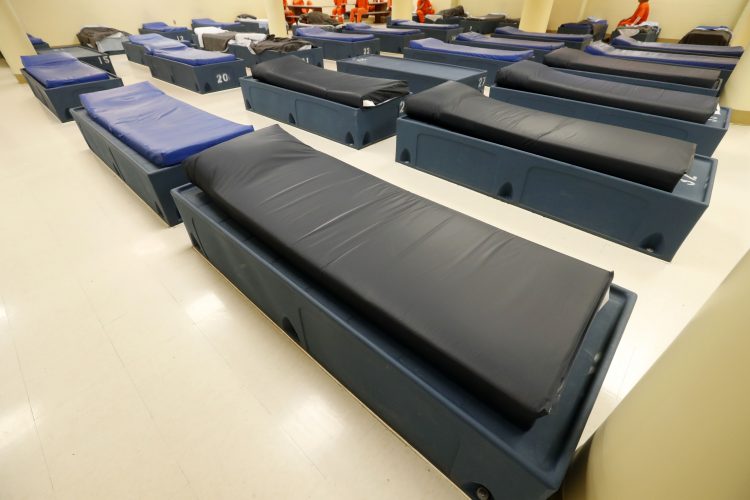 Reardon said the state did not consider gym time as mandated recreation time because inmates did not have access to fresh air. So the two-story gym was repurposed for exam rooms, the detox unit and medical records about four years ago.

Health supervisors say inmates generally stay healthier in jail than they do after they return home because their health is so closely monitored behind bars.

Those in detox, like Seay, receive medical evaluations three times a day. Medication is offered for withdrawal symptoms like itching, tremors, aches, nausea and other step-down medication but not more powerful replacement therapy drugs like Suboxone or methadone, said Christa M. Cutrona, director of correctional health.

Once inmates complete the detox program, they can join the rest of the population.

“We can monitor everything,” Reardon said, “down to your diet.” 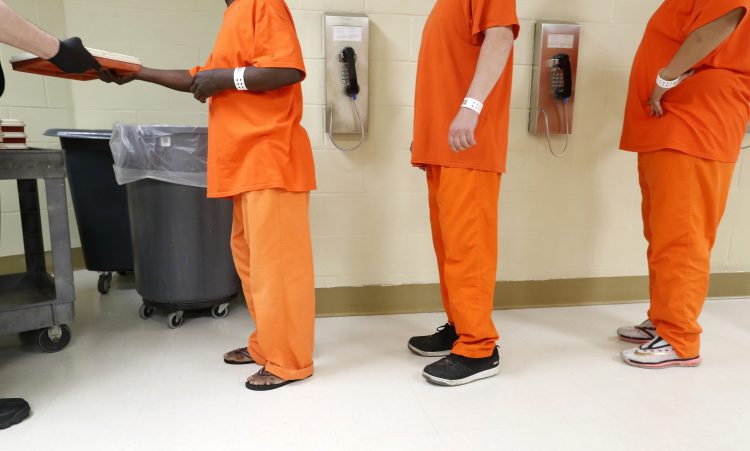 Inmates line up for lunch in the detox unit. (Mark Mulville/Buffalo News)

It’s a different story once an inmate is released. Without structure or a follow-up drug treatment plan, those imprisoned for drug addiction-related offenses risk returning to the life they previously led.

Reardon raised his eyebrows about Seay's claim to have been arrested 62 times for everything from domestic disputes to assault and burglaries. He pulled Seay’s electronic rap sheet and realized the tired-looking man in detox was probably right.

Consider the toll of Seay’s arrests over time, he said.

“If we are able to get that person clean the first time he comes through, that’s 62 crimes he’s not going to commit,” he said.

Both the Department of Mental Health and the Erie County Sheriff’s Office have asked the Legislature to cover the cost of new employees whose primary responsibility would be to handle the discharge of inmates directly to outpatient drug counseling upon their release.

All the county needs is someone to ensure a “warm transfer” of an inmate from jail to outpatient addiction recovery services.

To improve chances for success, county correctional administrators plan to restructure Holding Center housing units so that one male unit and one female unit would be dedicated solely to recovering addicts eligible for in-house group counseling by a BestSelf employee. Inmates from the Alden Correctional Facility could apply to be chosen for the special Holding Center housing program, Cutrona said.

The Holding Center already features a distinct housing unit for veterans, complete with seals and hanging flags in the common area representing the five military branches. It’s been so successful and led to such good behavior among inmates, Howard said, that a waiting list exists for correctional officers who want to be assigned to that unit. 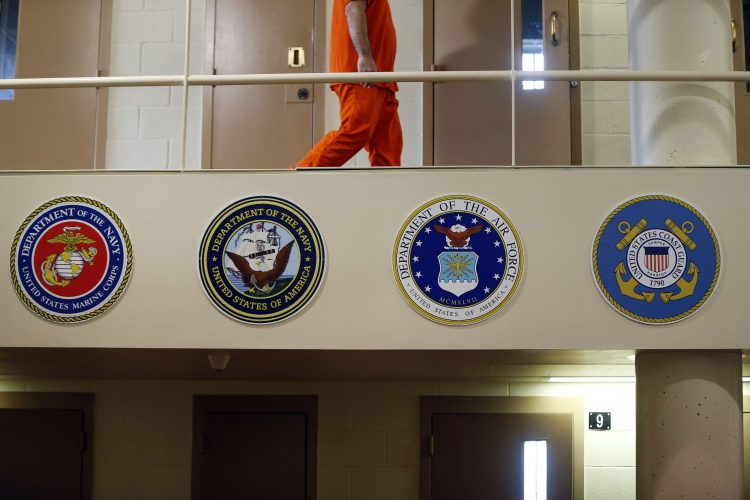 The hope is that individual drug counselors will get to build relationships with inmates in the new drug recovery housing unit, making it more likely that inmates will continue to see the counselors on an outpatient basis after they are released from jail.

To prevent those who are attempting drug rehab from immediately returning to drug use, Cutrona said discharge personnel would give inmates an injection of Vivitrol before leaving jail. Vivitrol is a long-acting injection that reduces cravings for opioid drugs and prevents those who attempt to use drugs while under the 28-day, opioid-blocking influence of the injection from getting high.

From what Seay has heard about the program, he’s a fan. It might be too late for him, he said, but it might help others. He volunteered to be interviewed for this story, he said, because he wants to help promote the project.

“They do a great job,” Seay said. “That’s good that you’re going to put it out there.”

A number of hurdles remain before starting the inmate drug rehab program.

The Sheriff’s Office and the Department of Mental Health initially submitted differing proposals for hiring personnel to handle the counseling and discharge of patients to outpatient therapy. Though they later combined their proposals for a total of three new county positions, Legislature majority members aren’t sure all three are needed, at an annual salary cost of about $145,000 excluding benefits.

The Sheriff’s Office has said one position would be sufficient to serve all of the inmates, something the Department of Mental Health proposal does not promise. But Mental Health Commissioner Michael Ranney said his two positions would provide expanded inmate access to in-house drug counseling and possibly link released inmates to a greater number of outpatient treatment providers.

“We don’t want to duplicate anything that they’re doing,” Ranney said of the Sheriff’s Office. “There are hundreds of inmates at any given time. We’re going to continue to work together.”

The main drug housing unit at the Holding Center would likely be limited to 33 cells – though hundreds could qualify. Reardon guessed that far fewer would initially express interest.

“We have to start somewhere,” he said.

And finally, there are no guarantees for success. 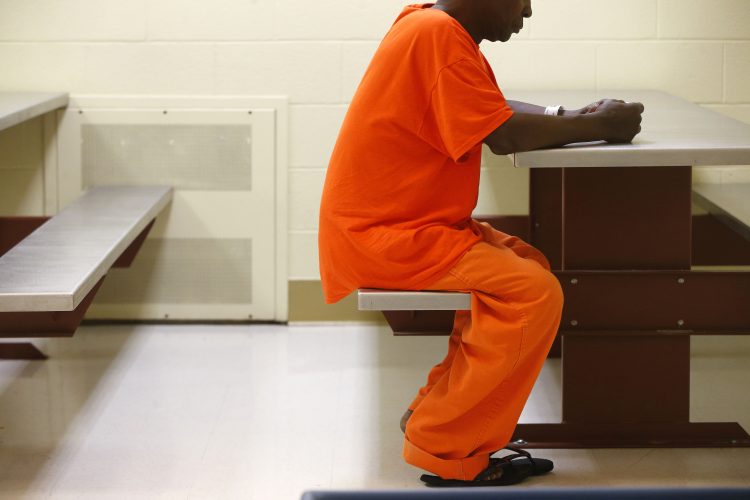 Inmate David Seay admits he's made bad decisions as he dries out in the detox unit of the Erie County Holding Center. (Mark Mulville/Buffalo News)

While Seay is an enthusiastic supporter of the new plan to increase inmate access to outside treatment, it isn’t as if he hasn’t been given plenty of opportunities to get clean during his 57 years. He’s spun through both inpatient and outpatient and detox programs over the years.

At one point, he did so well that he was offered a job as a certified HIV peer counselor.

His failure to follow through on that offer counts as one of his biggest regrets. Despite being the son of a deacon and product of a loving and stable family, he said, his early exposure to gang and drug culture set him on a path for which any detours always led back to the same place.

“I blame everything that happened to me on my choices, my decisions,” he said.

Corrections and health officials say they know not everyone will choose to participate in the rehab effort, and even fewer will succeed. But it’s wrong to set up inmates who get clean on the inside to fail on the outside. That not only harms the individual, it harms public safety, Reardon said.

“We are not going to be 100 percent successful,” Reardon said. “If we save one life, that’s one more than we’re saving now.”