Ruben Santiago-Hudson has come a long way from Lackawanna.

His widely hailed Broadway production of August Wilson's "Jitney," which ran for 10 weeks earlier this year in a Manhattan Theatre Club production in the Samuel J. Friedman Theater, took home the award for best revival of a play during the 71st annual Tony Awards on Sunday night.

Santiago-Hudson, a veteran performer and director who got his start performing in Buffalo's tight-knit African American theater community and achieved wider fame with his play and HBO film "Lackawanna Blues," was also in the running for best director. In a surprise, he was beat out by Rebecca Taichman for her production of "Indecent."

"We won the most coveted award," Santiago-Hudson, 60, said in a phone interview from New York. "This serves all of us well, and I think that's way more important than me as a director."

Though he is no stranger to the Broadway stage, "Jitney" - which was co-produced by singer-songwriter John Legend - marked Santiago-Hudson's directorial debut on the Great White Way. He said he hopes the win will provide the opportunity to re-mount the production after its short but lucrative run earlier this year.

"What I'd like to do is give an opportunity to many, many, many more people who've been daily saying, 'When is "Jitney" coming back?' Some of them have already seen it twice," he said. "August Wilson is one of the most profound and brilliant writers our nation and the theater has ever, ever heard, and he deserves an opportunity to run."

Santiago-Hudson said that in the speech he prepared for a potential best director win, he singled out aspiring performers at community and arts centers across the country, including those served by his Ruben Santiago-Hudson Fine Arts Learning Center in Lackawanna.

"I was going to address the kids across the country that if they can see me standing there, they can stand there," he said. "I wanted to send a message to artists: I made my directorial debut on Broadway at the age of 60. Never stop, always believe."

In her acceptance speech for the best revival honor, Manhattan Theatre Club Artistic Director Lynne Meadow lavished praise on Santiago-Hudson for his dedication to the play and Wilson's oeuvre. The show's short run earlier this year was, remarkably, the first time the piece had been produced on Broadway. 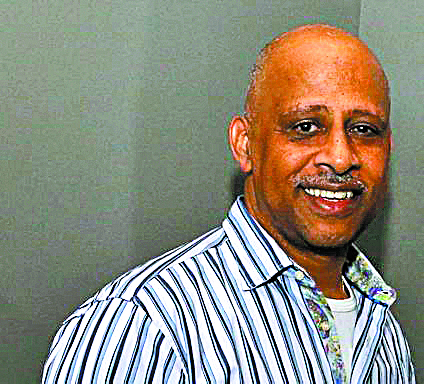 "Special thanks to our director, the great Ruben Santiago-Hudson," Meadow said. "Ruben was determined that Jitney would make its Broadway bow, and he was an inspiration to all of us. He brought out the best in all of us and we're so grateful to him."

The production of the play, part of Wilson's highly regarded "Pittsburgh Cycle," was not seen by producers as a money-maker and thus took an unusually long time to make it to the Broadway stage.

"It wasn't as important to them as it was to me. If Broadway, which is driven mainly by finance, doesn't see the positive financial implications of putting on the play, they're not going to put it on," Santiago-Hudson said. "They have to realize that they were wrong in that respect because we were a hit."

The critical reception of the play was overwhelmingly positive, and most agreed that the play's Broadway debut was long overdue.

"Wilson was not only saying that black lives matter, but also that black life matters," New York Times co-chief theater critic Ben Brantley wrote in his rave review of the Broadway production. "The world portrayed in “Jitney” is a self-contained microcosm, shaped by privation, obstruction and a make-do resourcefulness that becomes its own art form."

The African American Cultural Center's Paul Robeson Theatre, one of the Buffalo institutions where Santiago-Hudson cut his teeth, also mounted a production of "Jitney" last year directed by local theater veteran Willie Judson. Like its Broadway counterpart, it won Buffalo's top theater honor earlier this month: the Artie Award for best production of a play.

Paul Robeson Artistic Director Paulette Harris said she was ecstatic to see Santiago-Hudson's win, which she sees as a testament to the enduring power of August Wilson's work.

"It's a wonderful opportunity to get that recognition for being a trailblazer for August Wilson's work," Harris said. She praised Santiago-Hudson's commitment "to August's legacy and the work that he's done over the years to highlight African American experience, which hasn't changed. Even today it rings true."

As for Santiago-Hudson, he is still focused on "Jitney" and securing another theater for a return to Broadway, now backed by the Tony Awards seal of approval.

"I need 20 weeks. I'll give it back to them right before Tony eligibility," he said. "I look forward to Jitney having another life."