He sat perched on his father's shoulders as they rolled in, all in gleaming black, blue, red, gray and white.

By the time the 17 jacked-up trucks and Jeeps had parked outside his family's Akron home Sunday, little Teddy DeGolier was squealing.

It was Teddy's 5th birthday party, and this was his surprise: a group of good Samaritans putting on a show for the monster truck–loving boy, who has moderate-to-severe autism.

When his dad, also Ted, lowered him to the ground, they bounded toward the trucks, trailed by Teddy's mother, Nicole LaMonte-DeGolier, and his 3-year-old brother, Jack. Friends and family looked on and cheered.

Ted hoisted his son up to the window of a lifted 2008 Chevrolet Silverado 2500 — a full stretch — to greet Justin Ribbeck, who helped organize the surprise.

"This is like his dream come true right now," his mom said soon after. "He can't touch all of them quick enough."

That dream came together through social media.

Two Saturdays ago, LaMonte-DeGolier posted on Facebook asking if anyone knew someone with a monster truck. Or, at least, a lifted pickup.

A friend who saw it is Ribbeck's cousin and knew he was a member of Go Big Off Road, an Akron-based lifted truck club. Ribbeck talked to his girlfriend and fellow member Sam Reiss, and they began organizing. 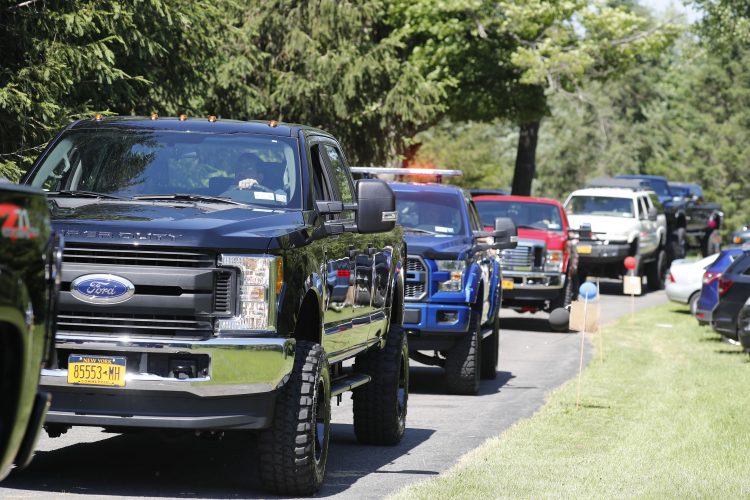 A parade of trucks lines the driveway for Teddy DeGolier for his 5th birthday celebration at his home in Akron. (Mark Mulville/Buffalo News)

When Go Big Off Road created an event on its Facebook page, people started talking.

By Sunday, the 17 rigs and their owners gathered at Newstead Veterans Park and then convoyed to the birthday boy.

"We thought it'd be a good surprise for him," Reiss said before the party. "We're just hoping to make his day and put a smile on his face."

Teddy is mostly non-verbal, but he's very physical. As the vehicles lined up in the driveway and yard, he pumped his fists and swung his arms in circles.

He and Ted weaved through the trucks, Teddy stopping to touch the tires and bumpers of each and to be lifted up to the cabs by his dad.

They stopped at one, and Ted asked his son to read an emblem on its driver's side: "Two, five, zero, zero," Teddy replied, tracing each number with his fingers.

He tries hard to speak when it's about something he loves, Nicole said.

"He's got an impeccable memory, so he knows all their names," she explained before the party, referring to the monster trucks made famous on TV. "When he says 'Grave Digger,' it's clear as a bell."

Teddy, who turned 5 last Wednesday, was mesmerized when he first saw the giant, tricked-out monster trucks on TV about a year ago. He had always liked wheels and things with them, but this was a whole different level. 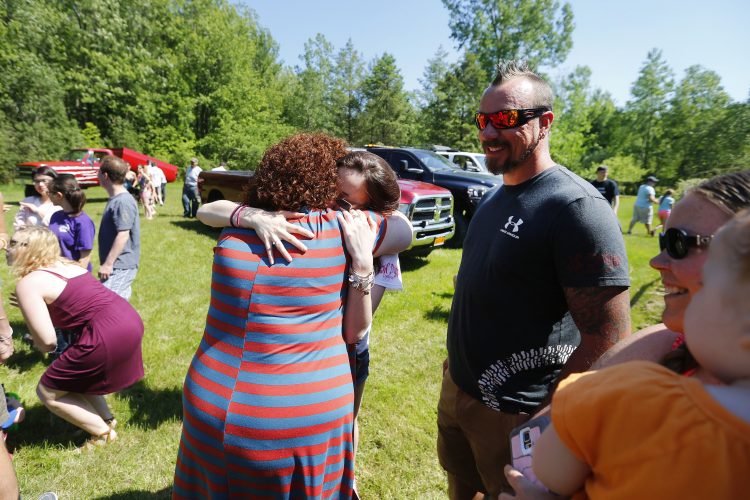 When he isn't at the Summit Center, a school for people with disabilities in Getzville, or participating in the Special Olympics, Teddy likes to sit on the end of their driveway with his mother and watch trucks pass by to fuel up at the nearby Tonawanda Indian Reservation.

Their driveway is long, and the house far from the road, because Teddy lacks safety awareness and needs to be watched at all times. This way, Nicole said, she doesn't have to worry as much.

And surrounded by friendly faces Sunday, Teddy's excitement was the only thing to worry about — if you could call it worrying.

"For Teddy, this is incredible," said Francis LaMonte, his maternal grandfather, who lives with the family. "These people are strangers, and it's so heartfelt that they spend a day like this, a Sunday, to come here and share the love. It doesn't get any better than this. These are good people."

Alec Dunkle of Elma was one of those people. He was motivated to bring out his blue 1994 Dodge Ram — lifted about a foot higher than normal — because a family friend's son has autism.

"Just gotta make some kids' days, some days," he said.

A few minutes earlier, Ted had opened the door of Dunkle's truck and let Teddy crawl inside the cab.

"Do you want a big truck like this when you're 16?" Nicole asked.