Terri Rozewicz wanted her 14-year-old daughter, Sam, to get out on the lake and get some fresh air.

It was the first time being in a kayak for Sam, who has Asperger's syndrome, and even the video game enthusiast had to admit in the end it was "pretty fun."

Taylor Dunford, who is 17 and on the autism spectrum, went kayaking when she was a little girl. So the chance to paddle out in a tandem kayak with her father, Mark, a disabled Army veteran, seemed to please the teenager. She splashed her hands in the water as soon as she settled into the craft.

"She loves the water," Mark Dunford said after the wet but happy pair returned from their paddle. "She's always loved the water."

Sam and the Dunfords were among the half-dozen kayakers who took advantage of 80-degree weather, bright sunshine and a steady breeze to enjoy the water of Green Lake in Orchard Park at Sunday's Team River Runner Adaptive Kayaking activity. Western New York Adaptive Water Sports and Orchard Park Recreation helped put on the event.

Eight volunteers assisted people with physical disabilities, people on the autism spectrum and people who suffered trauma as they ventured out on the lake in single or tandem kayaks. The point of the event was to give people with disabilities the same chance as the able-bodied to use the water, said Steve Spitz, an organizer and member of the adaptive water sports group.

"They don't always have that access," said Spitz, who became a paraplegic after suffering a spinal cord injury. "We're providing that access." 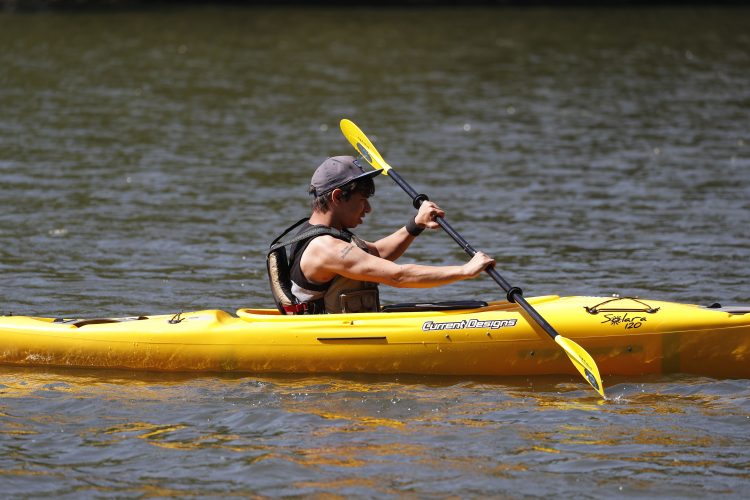 Sunday's kayaking was a follow-up to other activities the organization has hosted, including fishing, scuba diving, sailing and water skiing.

The group received a boost from the Niagara Falls National Heritage Area, which provided $10,000 in grants, and from the Team River Runner, a national organization that aids wounded veterans and their families with adaptive kayaking and canoeing programs.

On Sunday, the volunteers set up along the shore of Green Lake in Yates Park, and kept busy guiding kayakers in and out of the watercraft.

Some of the kayakers were a little hesitant at first, said volunteer Makenna Clavell, a Rockland County native who is studying occupational therapy in graduate school at the University at Buffalo.

"But once they're out there, they are speedy, they are going quite fast. Coming back with smiles, so that is good," Clavell said. 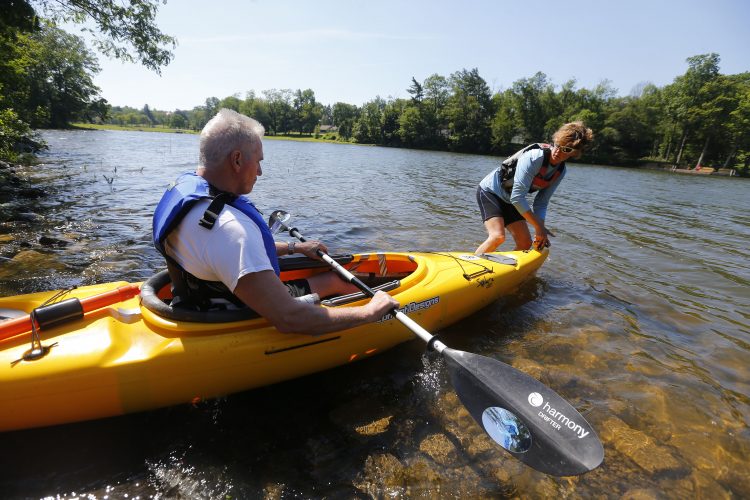 Mark Dunford was 24 and serving in the Army when he was injured in a non-combat accident and became a paraplegic. He's 55 now and is a lawyer.

He said he used to take Taylor out on the water more when she was little, but it's harder to do that on his own now that she's older.

That's why an event like this, where volunteers can help, is so valuable. They helped them both into the kayak at the beginning and gave Taylor a hand out of the kayak and her life vest afterward.

Dunford said he hopes more people with disabilities take advantage of these types of events.

"It's just such a really wonderful opportunity, because we have so much water in this area," he said.

Terri Rozewicz said she heard about the event from a Medicaid service coordinator who works with her daughter.

"I want her out there, enjoying the fresh air," Terri said.

Sam said it was tiring to paddle around the lake for as long as she did – two voyages that lasted about 50 minutes in total – especially when going against the wind and the current.

But she conceded she had a good time and said she might set aside her Nintendo game system to do it again some time. "Maybe," she said, smiling.