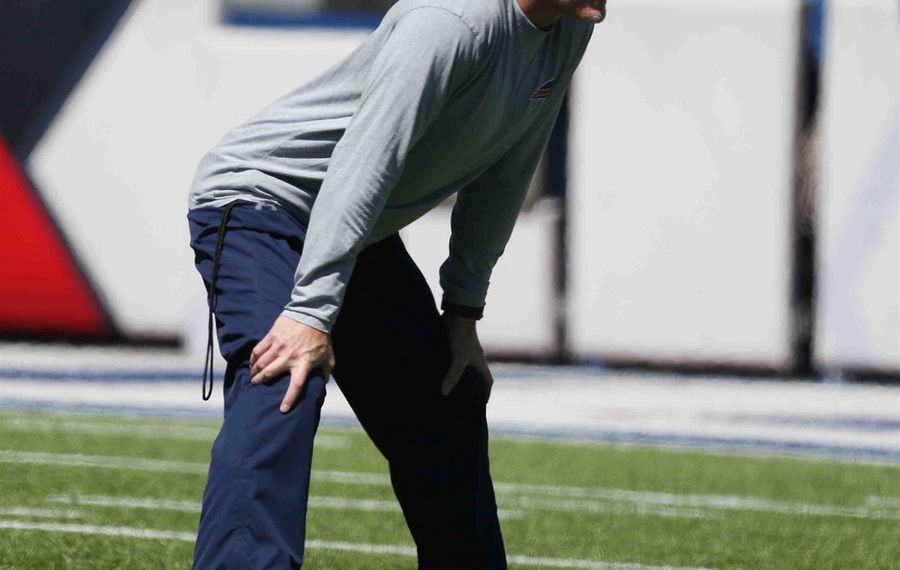 You have Buffalo Bills questions that you've submitted to me via Twitter @viccarucci.

@realjohnotto2: Do you think the Bills are an improved team overall from Rex Ryan's 2016 & 2015 versions?

VC: It's easy to assume the coaching of Sean McDermott and his staff will do plenty to help bring improvement on defense, the team's weakest area the past two years.

But I also think it's far too early to make that or any other predictions about the Bills. Yes, they figure to be a smarter and more disciplined team overall, and that should translate into fewer of the silly mistakes that were made because of frequent defensive substitutions and other pre-snap adjustments.

Still, they've made so many changes at critical spots, especially in the secondary, that it's hard to envision all of those pieces coming together right away. The same goes for the transitions that naturally come with new coaches and systems that have to be taught and learned.

It's possible the Bills will play better, but their record, based on what looks like a tough schedule, might not reflect as much. As of now, I'm not optimistic that this team will snap its 17-year playoff drought, but I reserve the right to change my mind.

@Aweir15: Do u think there will be an emphasis to open up the passing game and have Tyrod Taylor actually throw down the middle of the field?

That's because Dennison will tap into Taylor's considerable mobility and have him often moving to the perimeter rather than working from the pocket. The idea will be to design pass plays that allow Taylor to see the field better than he does when he's starting with the middle of the field.

However, I don't see much in the way of opening up the passing game. This will still be a run-first scheme that will look to take full advantage of what LeSean McCoy has left in his 29-year-old legs and do much of its throwing from play-action because the run will be easy to sell.

@TP_Katene: Any positions that Bills could still address with a FA addition? RB/TE depth maybe?

VC: The most obvious spots are receiver, with the pursuit of Jeremy Maclin (which I'll get to below), and tight end, with the Bills having also visited with Gary Barnidge. I think Barnidge would be a tremendous addition this deep into the offseason, but the price has to be right and he won't be motivated to help to that end right now.

Maybe, that changes during the preseason when injuries and/or poor performances wind up enhancing his bargaining position. For now, the Bills or any other team that might be interested in him can stand pat.

@samuel_utley: You think we get Maclin?

VC: Yes, provided he's willing to accept what I suspect will be an offer of a mostly modest contract that would be heavy with incentive clauses.

The Bills figure to have no desire to pay big money to a 29-year-old receiver, with an injury history, who figures to be a one- or two-year solution for depth on a team whose roster-building is mainly driven by long-term thinking.

@InYourEyes4u: Are you surprised that Jairus Byrd has not been signed yet? I thought the Bills would be the natural fit with his past and his father, Gil, on the staff.

VC: I'm not all that surprised that Jairus is still available. He has not been the same since suffering a devastating knee injury with his most recent team, the New Orleans Saints.

His father's presence on the Bills' coaching staff won't trump the conclusion of McDermott or the team's other player-personnel decision-makers that Jairus simply doesn't have what it takes physically to make a substantial contribution. It's an opinion that other clubs around the NFL seem to share.

@mclennon99: Every opposing DC will likely be telling his guys to try & step on or twist Sammy Watkins' foot every play. How does he protect against it?

VC: He doesn't. He has to worry about doing what he needs to do to get open and make catches. If he's focused on protecting his foot or any other part of his body, he doesn't stand a chance of making a successful comeback.

A player who reaches that point usually becomes an ex-player fairly quickly.

@WheresAlby: Which college qbs are bills going to be watching most closely for 18 draft?

VC: It's a safe bet that, for now, they'll be focused on the same quarterbacks that you and everyone else will be watching: USC's Sam Darnold, UCLA's John Rosen and Wyoming's Josh Allen.

@JeremyPowley: Do you think Walt Powell's suspension eliminates any chance of him making the final 53 roster?

VC: Yes. I don't see McDermott having a whole lot of tolerance for a mistake by a player on the fringe, even if it is at a position where depth is a concern.

@williamkevin24: Cordy Glenn's career now with high maintenance tag. U get feel there is priority 2 develop his replacement sooner than later?

Glenn's chronic ankle problems are a concern and no doubt contributed to the down year he had in 2016 after getting a massive contract before hitting free agency after the 2015 season.

But the Bills have bigger and more immediate issues at right tackle. That was the point behind making Dion Dawkins a second-round draft pick. Of course, with Glenn unable to practice, Dawkins has worked at left tackle during OTAs.

@SportingGlasses: How many truly blue chip players do we have in this team?

@lophus89: What should be the expectations for Shaq Lawson this season?

VC: I'm thinking he'll perform better as an end in the new 4-3 base scheme than he did as an outside linebacker in the 3-4. He never was comfortable working from a stand-up position. Putting his hand on the ground is far more natural.

I don't know if Lawson will ever live up to the expectation of a first-round pick, but I think he has a chance to be consistently solid.

@bilzfancy: How is Logan Thomas looking?

VC: Funny you should mention him. During Thursday's OTA practice, Cardale Jones fired a red-zone pass at Thomas that came in so hard, it bounced off his hands. But he showed the necessary concentration to reel it in and score a touchdown.

Otherwise, I can't see that I've noticed all that much from him that makes me believe he'll have a whole lot of impact.

Side note: I'm a big fan of his first name, because it is shared by my grandson, who was born last month.