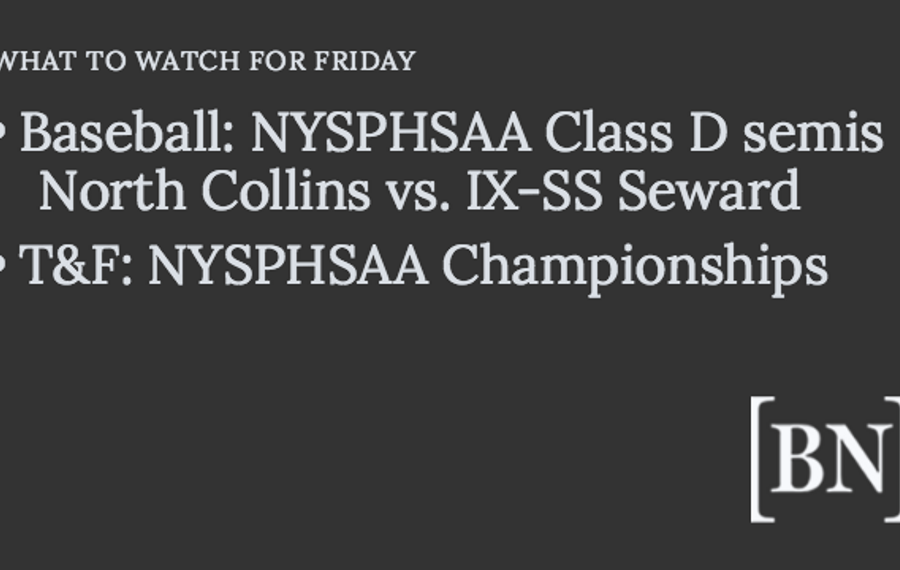 What to watch for Friday

Championship heats are split over the two days of competition. Click here for the complete schedule of events.

Complete entry lists can be found below:

Follow live results as they happen by clicking here.

In its first state final four appearance in school history, North Collins faces SS Seward of Section IX at 5:30 p.m. at Conlon Field at MacArthur Park in Binghamton. The winner advances to Saturday's 1 p.m. final at Binghamton University against either II-Fort Ann or IV-Deposit/Hancock.

One of North Collins' strengths is its pitching staff, which is led by Trevor Mercado. Brandon Zielniski, who leads the team in saves, starts at shortstop when he's not on the mound and leads the team in hitting (.486 average, extra-base hits, RBI and slugging percentage).

Teams, athletes determined to focus on what they can control at states

Teams, athletes determined to focus on what they can control at states

Finalists announced for Prep Talk Program of the Year

And the nominees for Prep Talk Coach of the Year are ...