Easton Jordan has seen Lauren Walier only twice, but she already has made a powerful impression.

When the two spoke last month, 5-year-old Easton showed Walier a video of him using his walker without a sling to hold himself up – one of his latest milestones.

The kindergartner from Orchard Park, and Walier, 19, who lives outside Atlanta, have three big things in common: cerebral palsy, a steely determination and a novel physical therapy that has helped take Walier from a wheelchair to a walker, then a crutch to a cane – and, during the last year, to the top of the ballroom dancing world.

Easton recently became one of the first people in Western New York to begin an intensive form of physical therapy called the Symptom Recovery Model, which aims to retrain the body's muscles, joints and tendons to become less spastic and more flexible.

The model is largely unused and unknown outside Georgia, where Sue Leger, a doctor of physical therapy, has developed and improved it during the last dozen years in her physical therapy practice, First Step, which has two offices in the Atlanta suburbs.

Walier – whose parents, Sherry and Peter, were raised in Hamburg – has been one of First Step Physical Therapy's top patients during the past five years. The family often visits Western New York and raises money in the region through Lauren's Make Lemon Aide Foundation for CP. They have set out to use those funds to train physical therapists in the region and help cover the cost of treatment borne by some of the families touched by cerebral palsy. 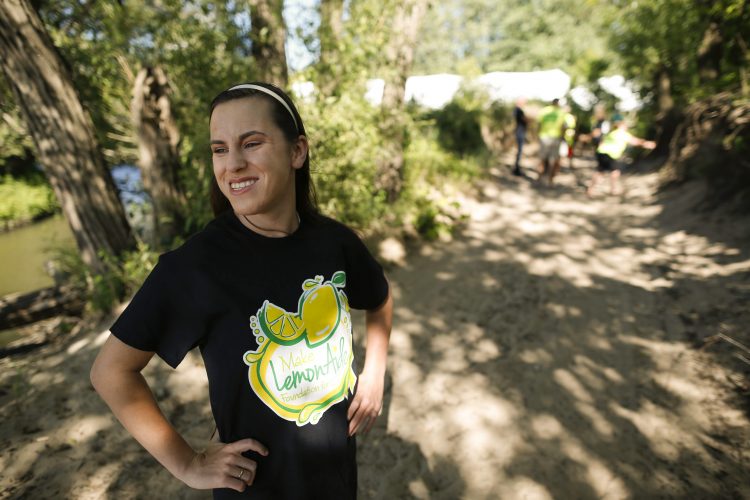 "I am energized by this," said Elizabeth Bailey-Sands Clay, a pediatric physical therapist with Beyond Boundaries in Hamburg who treats medically complicated patients. "Once you meet Lauren, and you hear her story, and you watch her dance, it puts all of this into perspective for somebody like me."

She has already started to use some of the techniques on Easton.

Jill and Brent Jordan had already begun to notice Easton wasn't reaching developmental milestones by the time he turned 1 and struggled to blow out the candles on his birthday cake. He wasn't rolling over or crawling independently.

"As much as my background and training prepared me for working with the special needs population, I don't think anything can prepare you for having a child with special needs," said Jill Jordan, a special education teacher at Williamsville South High School.

The Jordan family reached out to Erie County Intervention Services, which helped them get a diagnosis for Easton and find ways to start treatment.

Doctors discovered Easton had agenesis of the corpus callosum – an underdeveloped membrane between the two hemispheres of his brain – making what should be a sort of superhighway to share information more like a two-lane country road. It put him on the spectrum for cerebral palsy, a movement disorder. One in five people with the condition can’t speak, according to the Cerebral Palsy Foundation. One in three can’t walk. One in two live in chronic pain.

Cognitively, Easton is on track, his father said. "It's the physical that holds him back," he said. "We don't want the physical to hold him back."

CP is categorized by the type of muscle tone. Easton has increased muscle tone, known as spasticity, in both legs and his left hand.

"Did you ever have a leg cramp while you're sleeping, one that wakes you up and gets you out of bed? That's similar to how spasticity feels," Clay said. "Easton has to deal with that all the time. If he doesn't have regular stretching and regular therapy, spasticity takes over and it's painful."

Despite his challenges, Easton lives a life filled with love and laughter. He and his sister, Tessa, 6, are near-constant companions and the family makes regular trips to Allegany State Park, the Buffalo and Erie County Botanical Gardens and Explore & More Children's Museum. 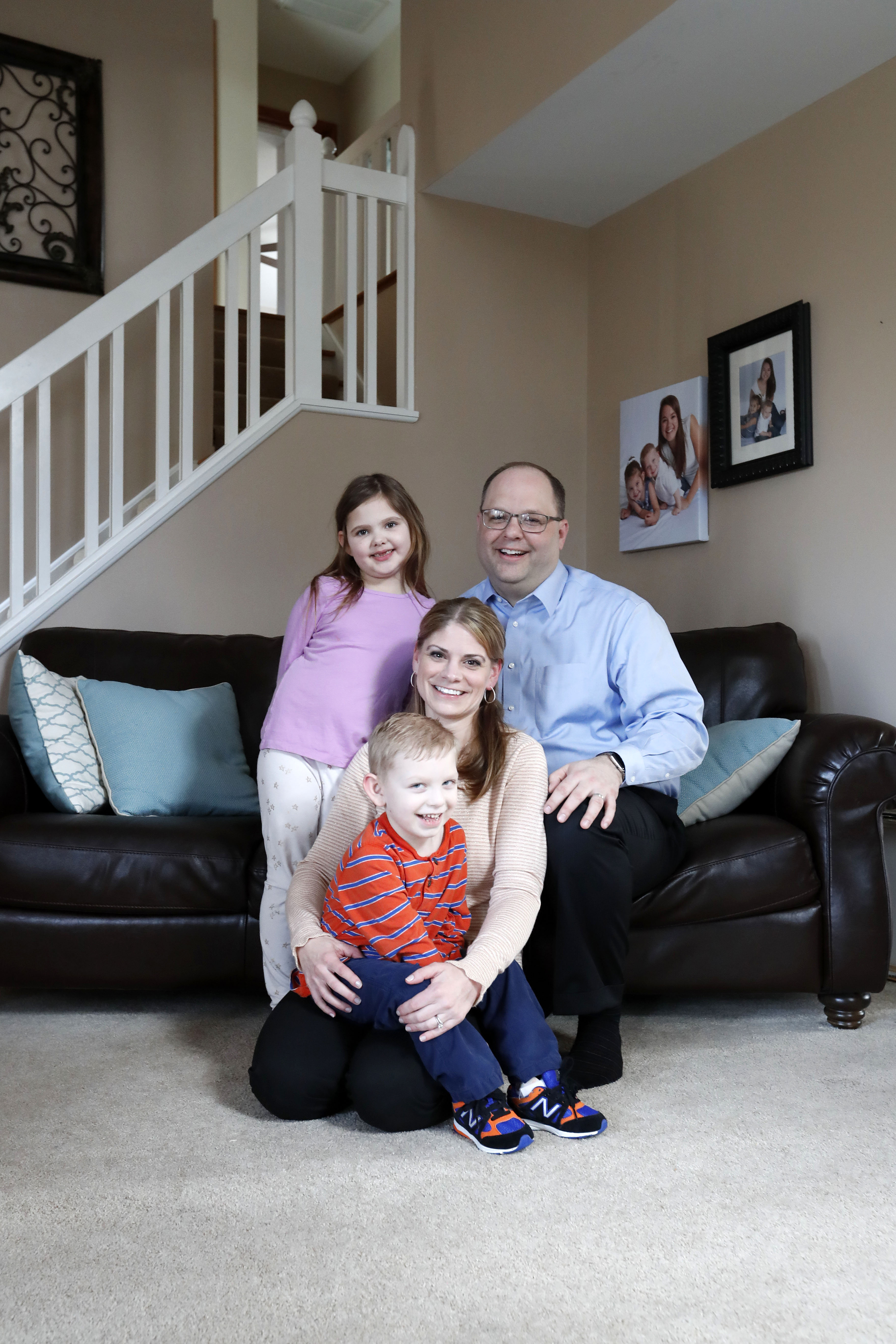 "We don't alter our lifestyle," Jill Jordan said. "We make sure we include Easton. And if he has any interests, we make sure he has the opportunity to pursue them."

Easton loves "The Lorax" movie, "Pete the Cat" books and Chinese food. He starts his second season of Challenger T-Ball at the end of the school year.

"He will very clearly tell you where he wants to go, what he wants to do," said his father, director of technology with the Hamburg school district.

The family – including sister Kayleigh, 20, who is away at college – make up "Team Easton." Clay and several other health professionals, as well as his teachers and teacher aide, also are among the valued members. They help Easton tackle daily physical therapy as well as four rounds of occupational therapy, two rounds of speech therapy and a vision treatment each week. Team members also help with regular visits to Strong Memorial Hospital in Rochester and Shriners Hospital for Children in Erie, Pa., for treatment that includes Botox injections every six months to loosen his limbs.

Easton uses a wheelchair or chair to sit and often is tethered by a sling. He prefers to get around with his walker, including at the Green Lake playground splash park near his house.

"It's his goal to walk," his mother said.

Easton also has a flesh-and-blood inspiration.

Lauren Walier’s idea for her Make Lemon Aide Foundation emerged when she was 12, after she attended a cerebral palsy awareness conference at the Centers for Disease Control and Prevention headquarters in Atlanta, near her home in Milton, Ga.

She learned that about 17 million people, including nearly 1 million Americans, have CP. She also learned federal research funding is limited for a motor condition that afflicts more children than any other.

It didn’t sit well. The Waliers and Atlanta attorney Robert Helfrich set up the foundation as a nonprofit in 2013 to help develop new treatments, advance research and share information to improve the quality of life for those with cerebral palsy.

The foundation hosts fundraisers in and around Atlanta, but its largest annual event, the Walk/Run/Roll in Lauren's Shoes, is held in Western New York. This year, it will take place Sunday morning at Wilkeson Pointe in the Buffalo Outer Harbor. 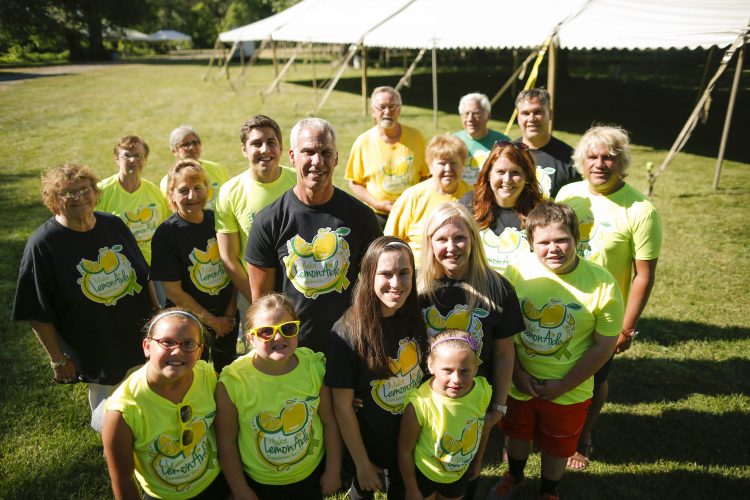 Lauren Walier,of Milton, Ga., center, is the inspiration for the "The Make Lemon Aide Foundation for Cerebral Palsy," which will host the annual "Walk/Run/Roll In Lauren's Shoes" this weekend. (Derek Gee/Buffalo News file photo)

Walier credits the Symptom Recovery Model with the lightness she has found on her feet. She and her ballroom dance partner and instructor Mayo Alanen – who has appeared on "Dancing With the Stars" on ABC – won their first dance competition together in Nashville earlier this year. They have since danced in competitions in Dubai and Michigan.

"The ballroom reintegrates what I get all day in therapy," Walier said. "Mayo doesn't let me slack or slouch. It's all about posture and using the correct muscles. Dancing is really a form of walking – but it's a little bit more fun for me."

Her doctor told her earlier this year, "You are an athlete."

A new form of treatment

Walier doesn't love her treatments. She groaned about returning from them several weeks ago during one of her frequent visits to Western New York to see extended family members and help plan two foundation events.

That said, she likes the results.

Walier and her physical therapists also understand that not all patients who go through the Symptom Recovery Method make the same progress she has.

"Everyone starts in a different place and everyone's going to end in a different place," said Josh Davis, a doctor of physical therapy, practice manager and partner with First Step. "Given the ability of someone to devote enough time during the day to the treatment and the therapy, you will see some functional progress. You will see some improvements. Lauren had the time and the ability and the energy to be here consistently."

Still, said Davis and Clay, almost everyone who undergoes the treatment sees demonstrable improvement – and not just those with CP. The Symptom Recovery Model can be used with those of all ages and has helped those with ALS, Alzheimer's disease and autism, brain injuries, spine injuries and stroke damage, as well as 55 other conditions, according to First Step.

"We're not treating a disease, but the functional deficits that happen because of the disease," Davis said.

The holistic approach treats the body in its entirety, trying to locate the "primary drivers" of disease, and uses several physical therapy components in varying combinations to ease the damage those drivers have wrought.

Physical therapy – designed almost a century ago to treat polio patients – used several of those components, Davis said, but in recent decades has focused mostly on exercise.

Walier has persevered through five years of treatment, stretching as long as eight hours a day, three times a week. She switches every hour between the 11 physical therapists and 5 assistant physical therapists at First Step. Each of them focuses on their strengths, and Walier's needs, during one-on-one sessions. She also gets exercise "homework" for days away from therapy.

"We're trying to do what's best for our patients under physical therapy guidelines," Davis said.

Health insurance plans vary as to how much of the First Step work is covered, based on individual insurance plans, Davis said, and usually cover most of the cost. The company has made special efforts to provide insurers extra information to underline the progress patients make, he said.

The Walier family – her father is a successful engineer – covers Lauren's out-of-pocket costs, as well as her dance-related travel expenses, and the foundation helps others with CP get access to similar treatment. Along with paying nearly $9,000 for Clay's training, the foundation looks to cover the cost of a select number of Western New York families to travel to Atlanta for 40 hours of Symptom Recovery Model therapy stretched over a week. 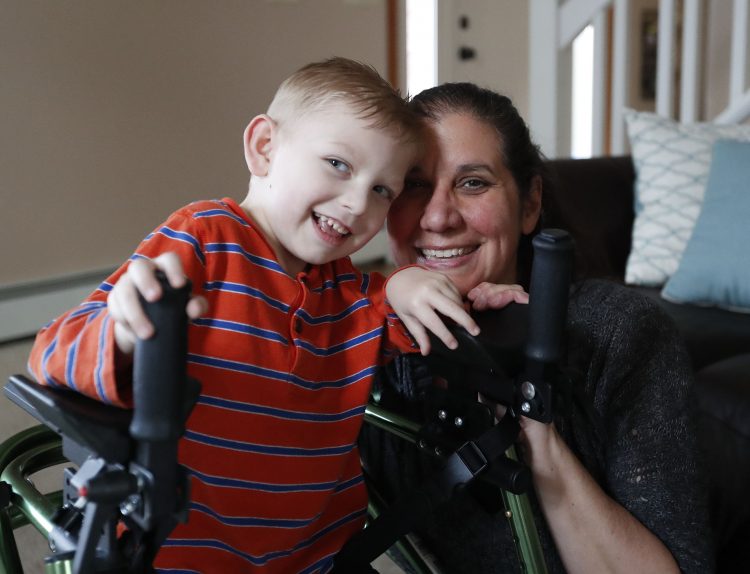 Clay, who is also an adjunct professor at Daemen College in Amherst, has attended two of a dozen courses in Atlanta that will certify her in the model protocols – and give her enough information to teach them.

"I think that this model offers me such a big bag of tricks, so many different techniques that I can pull out and apply, that if I apply them properly based on the way a child is functioning, I do believe it could benefit anyone if physical therapy is indicated," Clay said.

That includes Easton Jordan, whose mother reached out to the Make Lemon Aide Foundation last year after reading about it in The Buffalo News – then connected Clay to Lauren Walier and her family.

"Easton clearly states he wants to walk," said Clay, "and he's got a plan."

What: 5K run and 1-mile walk for people of all abilities, including those with wheelchairs, walkers and strollers, to benefit the Make Lemon Aide Foundation for CP. For a unique twist, you can choose to wear ankle weights to simulate what it may be like for someone living with cerebral palsy.

Where: Wilkeson Pointe, 225 Fuhrmann Blvd. in the Buffalo Outer Harbor; there will be plenty of free parking.

For more: Donate, register for the race or learn more about the foundation at makelemonaide.org.