In 2013, Martin Danilowicz, veteran of kitchens including Just Pasta, went off the beaten path to open Martin Cooks in the Horsefeathers building on Connecticut Street. He drew lunch and brunch crowds to the West Side with well-executed comfort food like pasta Bolognese and light-and-bright surprises such as herb-powered green pancakes. Dinner was omakase, 18 counter seats served a weekly prix fixe menu.

A few Martin Cooks standards remain, but the frequently changing menu is mostly a rotating cast of inspirations, including a rotisserie chicken presentation that changes with the season, and a new pleasure zone: some of the best creative pizza in Buffalo. Six months in, people are flocking to Roost.

Roost does not make itself easy to spot. Guests drove by the seven-story Crescendo building, despite their phones telling them to stop. The entrance at the southern end of the former Bison Storage building is unmarked. Judging by the crowds, especially for dinner and brunch, a sign would be superfluous. 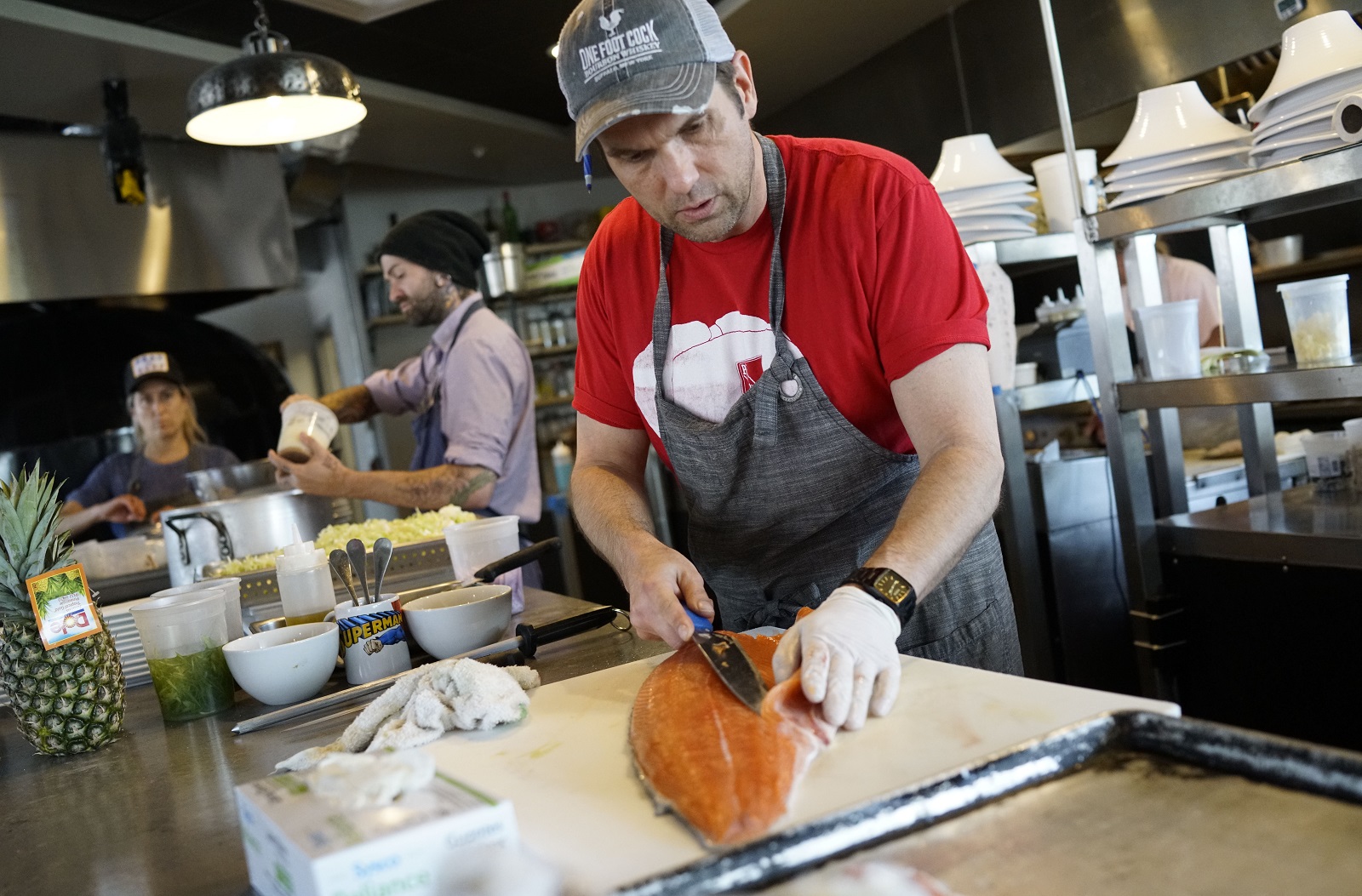 Martin Danilowicz filets a salmon in the open kitchen of Roost, his new restaurant on the first floor of the new Crescendo apartments. (Derek Gee/Buffalo News)

Customers are greeted by a massive rooster mural. The bar, by itself, seats about twice what Martin Cooks did for dinner. There's also regular-height and high tables, and a semi-private room. Chandeliers and expanses of wood soften the industrial surroundings, but not the rumbling din of a full house. Illuminated wine coolers make a wall on one end of the open kitchen, highlighted by a hulking pizza oven.

Pizza looms large on the menu. There were eight the night I visited, from $13 to $18. Only the Margherita was standard-issue. One was labeled green pancake with harissa (North African spice paste), raita (a yogurt-based condiment) and arugula. On the newest menu, a pizza offers eggplant, lentils, fontinella cheese and harissa.

A version with smoked blue cheese, roasted mushrooms, shallots and prosciutto ($18) was a triple-umami flavor blast. The intensely flavored ingredients were well-metered to avoid overwhelming the whole. Its foundation was outstanding as well, crackle-crusted yet tender, with no crusts left behind. 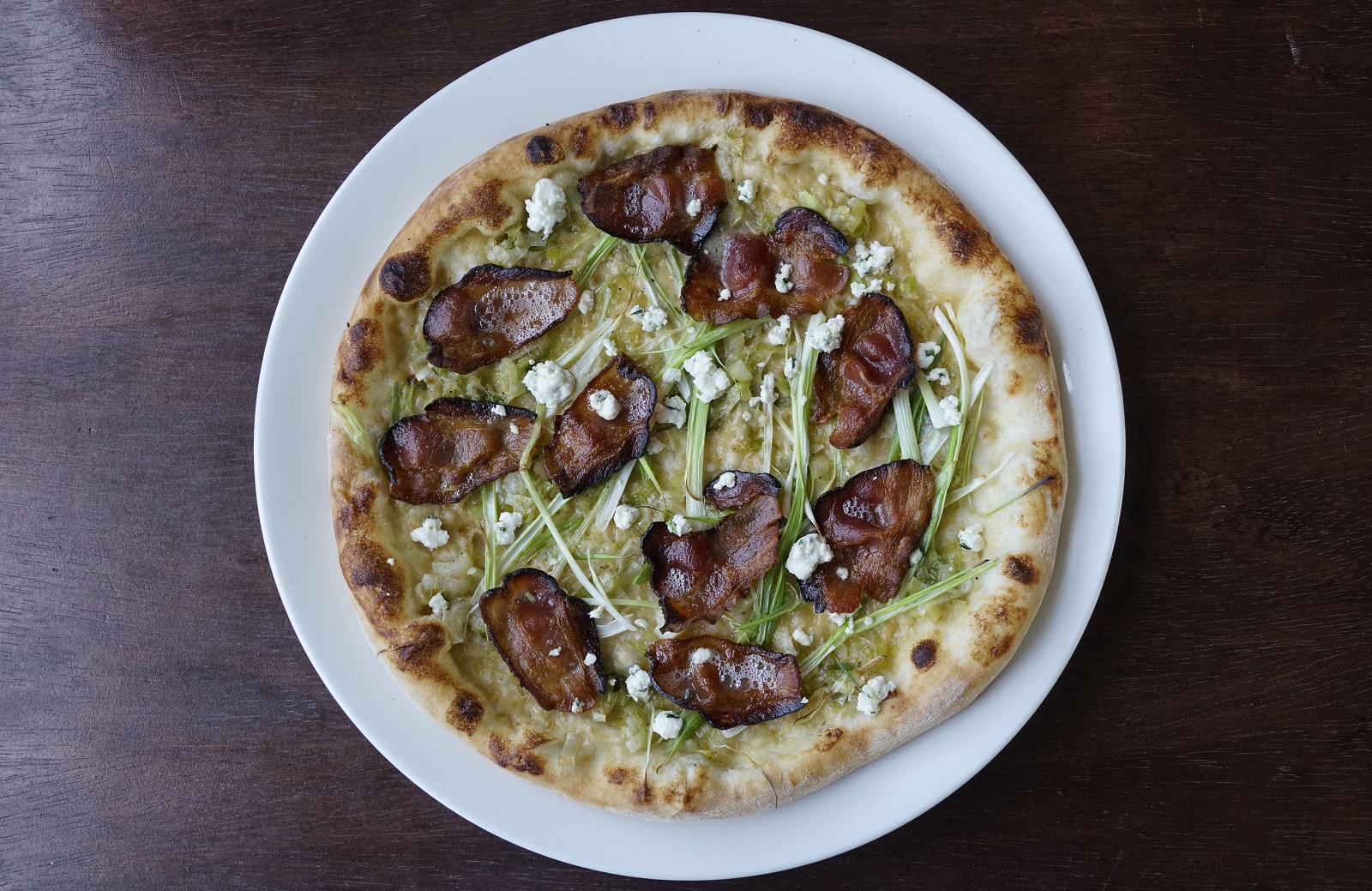 A dish of Bolognese meat sauce on rigatoni ($18) satisfied with its depth of flavor and al dente pasta. So did an unusual pasta preparation, a cake of angel-hair crisped up in a pan and folded around a healthy dose of herbed mascarpone, then covered in chunky tomato sauce ($19). The bright acidity of the sauce, creaminess of the filling plus toasty crunch of browned pasta edges made it a winner.

Another perennial, risotto with asparagus ($18), was precisely cooked, with firm grains and slightly crunchy vegetable backed up with a whisper of truffle oil. It was looser than some versions, creamy with rice starch more than cheese. A jiggly over-easy egg added yolk and a decadent touch to the ensemble. 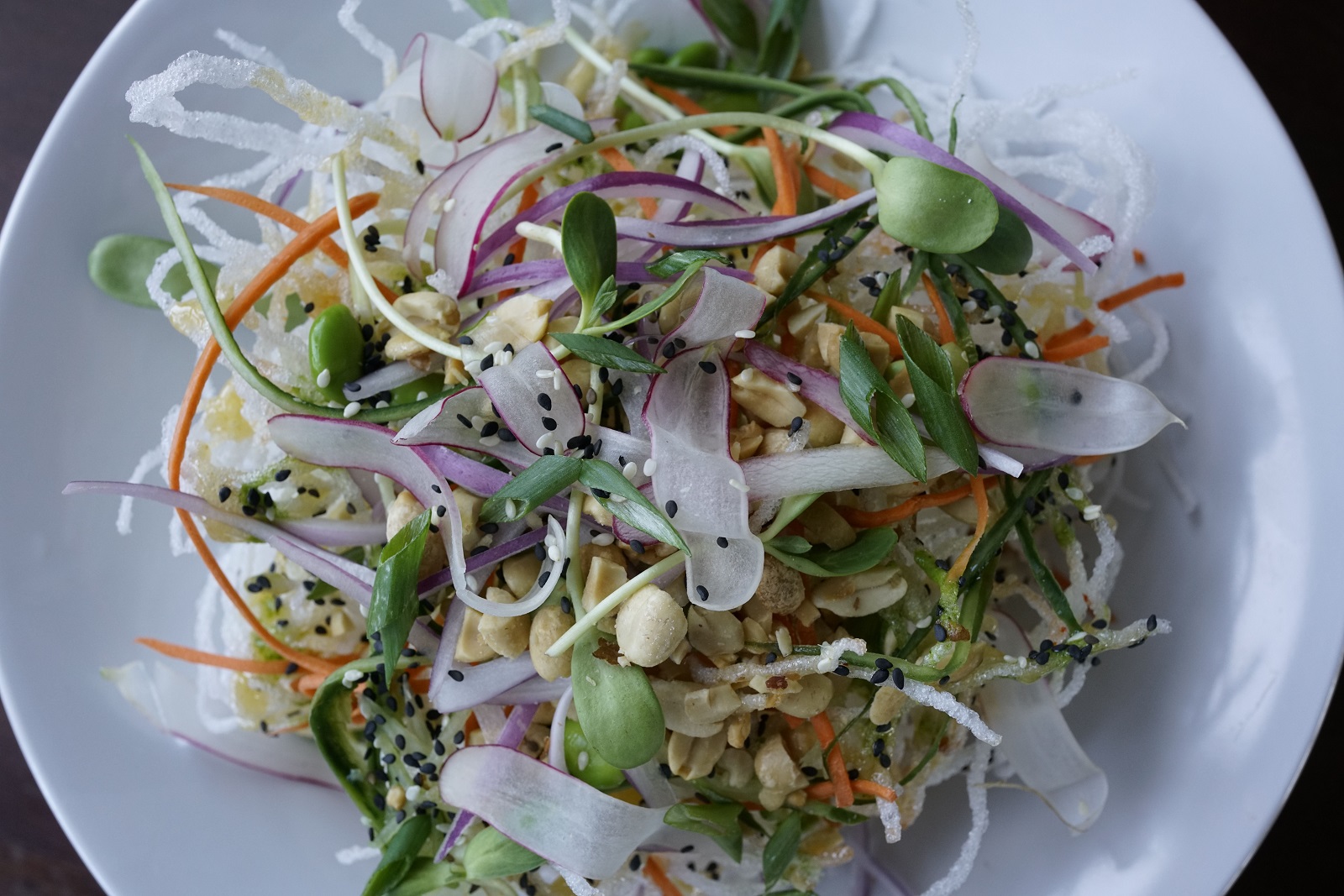 Octopus and burrata ($16) was another uncommon combination that was good to meet. The mascarpone-stuffed mozzarella was properly oozy, its fresh milkiness an excellent partner for the octopus' judicious charring.

Smoked trout ($15) soared with assists from rich avocado and bursts of acid from grapefruit, interspersed with precisely dressed spinach, shaved red onion and radish. Not so successful: beet-cured salmon ($12), petite, rosy rolls that didn’t get much of a boost from pearls of crunchy cantaloupe.

The half chicken ($22) rested on corn puree and a vibrant succotash of fresh corn kernels, bell pepper, lima beans and diced squash. A mini-loaf of remarkably airy cornbread completed the corny trifecta. Rotisserie roasted, the chicken arrived with moderately moist meat and lightly bronzed skin, the most ordinary thing on the plate. 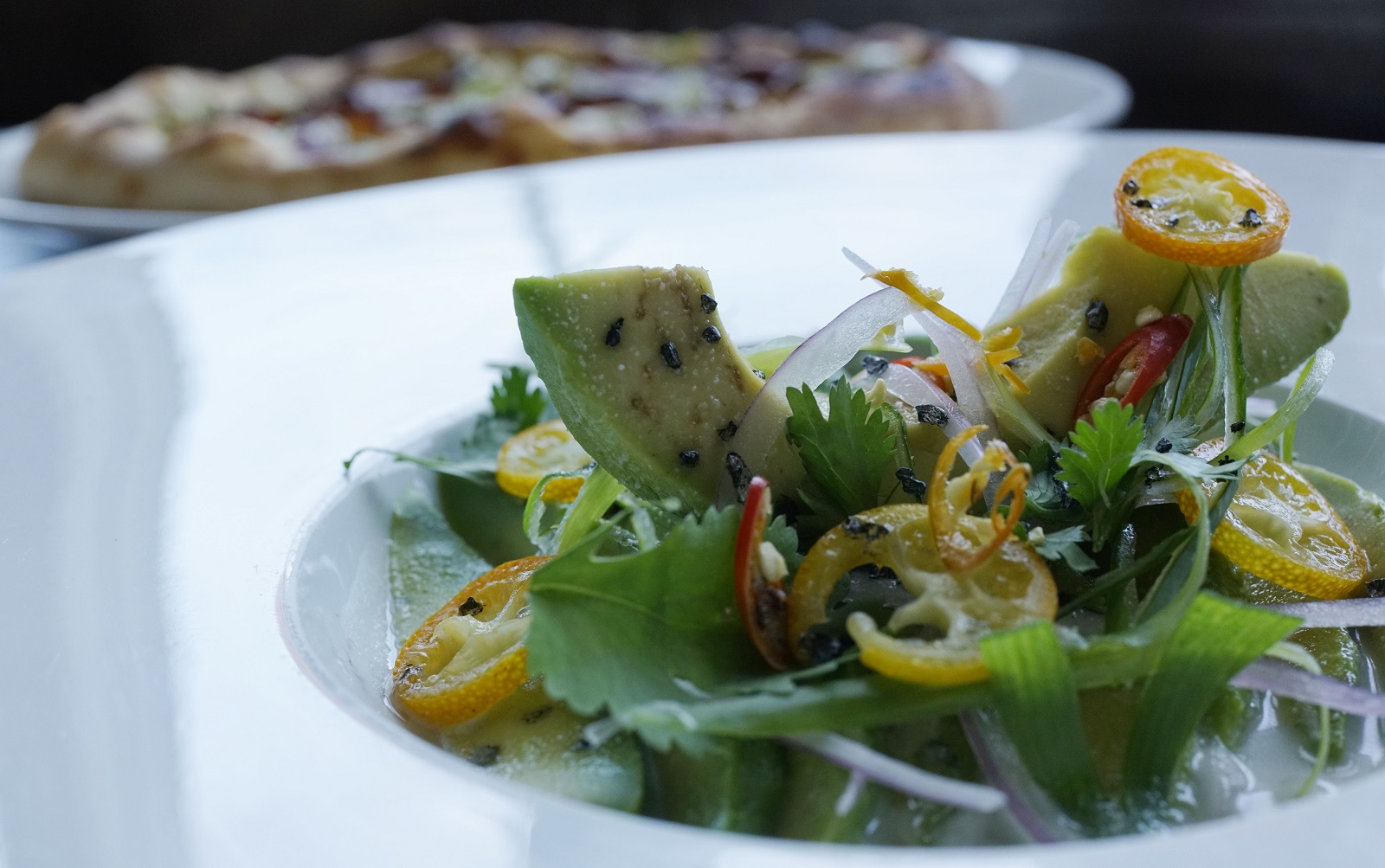 The best thing I can say about restaurant furniture is that I didn’t notice it, but that wasn't the case at Roost. Our high bench-table combo felt mildly awkward to clamber into. Service was intermittent, leaving us flagging for drinks and more water.

Those minor infelicities did not knock the shine off dinner at one of Buffalo's most promising young restaurants. Instead of scrappy West Side, it felt downright cosmopolitan. In the right seat, you may dine with glimpses of the city bustling by on Niagara Street on one side, and the Niagara Thruway on the other, punctuated by the occasional Amtrak train.

If you're looking to alight for dinner in Buffalo, Roost makes a cozy nest.