New York State is making a big bet on Athenex Inc. and the cancer drugs it is developing.

But the payoff for the more than $200 million that the Cuomo administration has set aside for Athenex and a new drug production facility in Dunkirk is far from assured, according to regulatory filings associated with the company’s initial public offering.

Athenex is a high-risk, high reward economic development play. If the company succeeds in bringing its drugs to market – and they turn into big sellers – it will mean hundreds of new jobs for Chautauqua County and give it a toehold in the coveted pharmaceutical field. If Athenex’s drugs don’t pan out – and they’re all still in clinical trials to determine how well they work and how safe they are for patients – it could be a costly disappointment for taxpayers and a blow to Cuomo’s efforts to revive the Western New York economy.

The filing provides the first detailed look at Athenex’s business, spelling out in detail the company’s success in raising money from both U.S. and Chinese investors, which has allowed it to invest heavily in drug research and clinical studies, while building a Buffalo-based business that now has more than 430 employees.

But Athenex, at the moment, also is a company with big expenses and modest sales, which means its losses have been growing as its drug-development efforts have reached more advanced – and promising – stages. Last year, the company posted a loss of nearly $88 million and generated a little more than $20 million in sales.

Athenex’s business is built around two main developments. The company believes it has developed a way that will allow chemotherapy drugs to be administered in pill form, rather than intravenously. And it has developed a way of inhibiting a type of protein, which Athenex officials believe could help limit the growth of some types of cancer.

By administering chemotherapy through a pill, Athenex officials believe it will be more convenient and comfortable for patients, allowing them to receive treatment at home, rather than through periodic IV doses in a hospital. They also believe administering chemotherapy drugs in pill form could help some patients tolerate their treatments better and avoid some side effects, potentially allowing patients to complete more treatment cycles.

Athenex executives were hoping to raise $100 million through the stock sale. But the company last week was forced to scale back its ambitions, slashing the total proceeds it expects to generate from the offering by about 30 percent.

Athenex is now selling 6 million shares of its stock at an offering price of between $11 and $13 per share. If the pricing winds up in the middle of that range, it would generate about $72 million in total proceeds. After subtracting the fees Athenex will pay to the investment firm managing the stock sale, the company expects to receive a little more than $61 million. If demand for the stock is strong, Athenex could potentially sell an extra 900,000 shares, which would increase the company’s take from the offering by another $10 million. 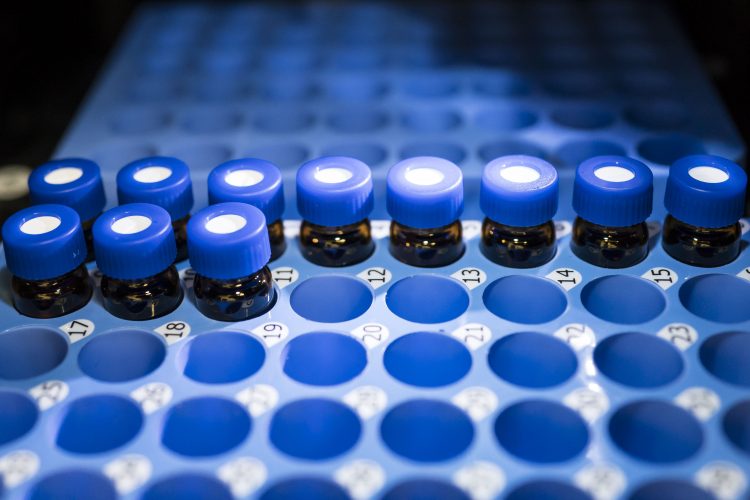 Samples are loaded into a chromatography instrument in the quality control laboratory at the Athenex facility in Newstead in May. (Derek Gee/Buffalo News)

The state is making a big bet on Athenex’s success. The state has agreed to spend up to $225 million to build and equip a drug manufacturing plant for Athenex in Dunkirk in return for a pledge to create 450 jobs within five years. Athenex, which promised to invest $1.5 billion in the Dunkirk operations over that 10-year period, can rent the Dunkirk plant for $1 a year during that time, with an option to extend the lease and its $1 annual rent for another 10 years.

The company also has received significant government investment for its drug production plant in China. In all, the company says those public-private partnerships have been worth $375 million to the company.

Developing new drugs is expensive. Athenex burned through nearly $48 million in cash last year and, based on its first quarter, was on pace to go through more than $80 million this year.

That’s why the stock offering is so important to the company, which can’t rely on its modest sales from the active ingredients it makes for pharmaceutical products to provide the cash it needs for its costly clinical trials and research.

Those capital needs, combined with a shortage of working capital before the offering, prompted Athenex’s accountants to raise doubts about the company’s “ability to continue as a going concern,” a dreaded warning that the firm is on shaky financial footing.

As it is, Athenex says the stock sale is expected to provide enough cash to fund its operations for the next year or so.

Much of the Athenex IPO could be gobbled up by the company’s current shareholders and executives.

Athenex, in its regulatory filing, said some of its existing investors, including some that are affiliated with some of the company’s directors, have expressed interest in buying up to $55 million of the stock sold in the offering. That could amount to as much as 76 percent of the offering. A major investment by insiders could be viewed as a vote of confidence by Athenex’s existing investors because they could be willing to increase their stake in the business.

In addition, the company is holding out as much as 7 percent of the shares Athenex hopes to sell through the offering so that its executives, directors, employees and business associates could purchase them at the offering price.

Athenex has more than 40 clinical trials for its drugs that either have been completed or are either currently underway or in the works. The results of those clinical trials will go a long way in determining how successful Athenex’s business becomes.

One of its drugs is currently in an advanced, Phase 3 clinical trial as a potential treatment for breast cancer that has advanced to a stage where it is a danger to spread to other parts of the body. That drug combines Oraxol, a widely-used chemotherapy drug that is administered through an IV, with a molecule developed by Athenex that could make it possible for patients to be treated by pill. About $28 million in the proceeds from the stock sale – nearly 40 percent – is earmarked to fund the Oraxol clinical trial.

Another drug candidate, based on a second type of technology developed by Athenex, recently completed a mid-range clinical study and is expected to begin an advanced, Phase 3 clinical trial during the second half of this year. The company plans to use $20 million from the offering to pay for that clinical trial for that drug, an ointment that could be used as a treatment for a type of precancerous skin lesion.

Other, early-stage trials are underway to see if the ointment could be used as a treatment for psoriasis.

The results of those studies – each more rigorous than the last – determine whether those drugs are effective treatments and whether the drugs can win approval from federal regulators for widespread use. That’s the finish line in the drug-development process – a point that many drug candidates never reach because their clinical trials don’t pan out as hoped – and a key turning point that signals the shift out of a period of costly research expenses and into a phase where, at long last, the drug can start to generate significant sales revenue.

Developing a new drug is a long process, even when everything goes well.

Athenex’s Oraxol combination has been in clinical trials for six years and it still hasn’t cleared its final clinical hurdle.

The risk for companies like Athenex is that drugs can show promise in early, preclinical studies, but come up short in more advanced trials that measure their safety and effectiveness in more detail. Failing a clinical trial can doom a drug candidate that had shown promise in earlier studies, dealing a hefty financial blow to drug companies that had invested millions of dollars on development and testing.

Even for drugs that successfully wind their way through the clinical trials, Athenex officials warn that the process is “inherently unpredictable,” sometimes requiring more extensive and costlier studies that prolong the approval process.

After that, Athenex will have to sell and market the drugs, convince doctors to use them and get health insurance companies to cover the cost.