For 50 years, Ben Caudle has watched the neighborhood around his sprawling Delavan Avenue auto shop slide slowly off the economic map.

When Caudle, 79, opened Ben's Tire Center in 1967, the Houdaille Industries plant across the street employed more than 700 workers. The plant meant easy money for Caudle, whose snowplowing contracts with the company and other East Side plants had dried up by the 1990s.

"We had two payloaders at the time and four trucks, all night and day," Caudle said on Monday afternoon as a mechanic clanked away at a 20-year-old Buick in the corner of an otherwise empty garage. "I'd like to see all those plants come back."

The plants Ben Caudle served may not be coming back. But the neighborhood is.

And the first signal of that rebirth appeared over the weekend in the form of a new mural by the British artist Shantell Martin. The artwork, a sprawling network of stark black line-drawings set against a white backdrop, occupies the 200-foot north-facing wall of the former Houdaille plant at 537 East Delavan Ave.

The gargantuan black-and-white drawing is a signal of things to come for the long-struggling neighborhood: Much of the plant will be demolished as part of a $42 million Buffalo Billion-funded revamp of the Northland Corridor into a hub for light industry and commerce that is being run by the Buffalo Urban Development Corporation.

The revamp is the product of a collaboration between the Albright-Knox Art Gallery's public art program and the University at Buffalo's fledgling Creative Arts Initiative, which funded it with a $60,000 grant. 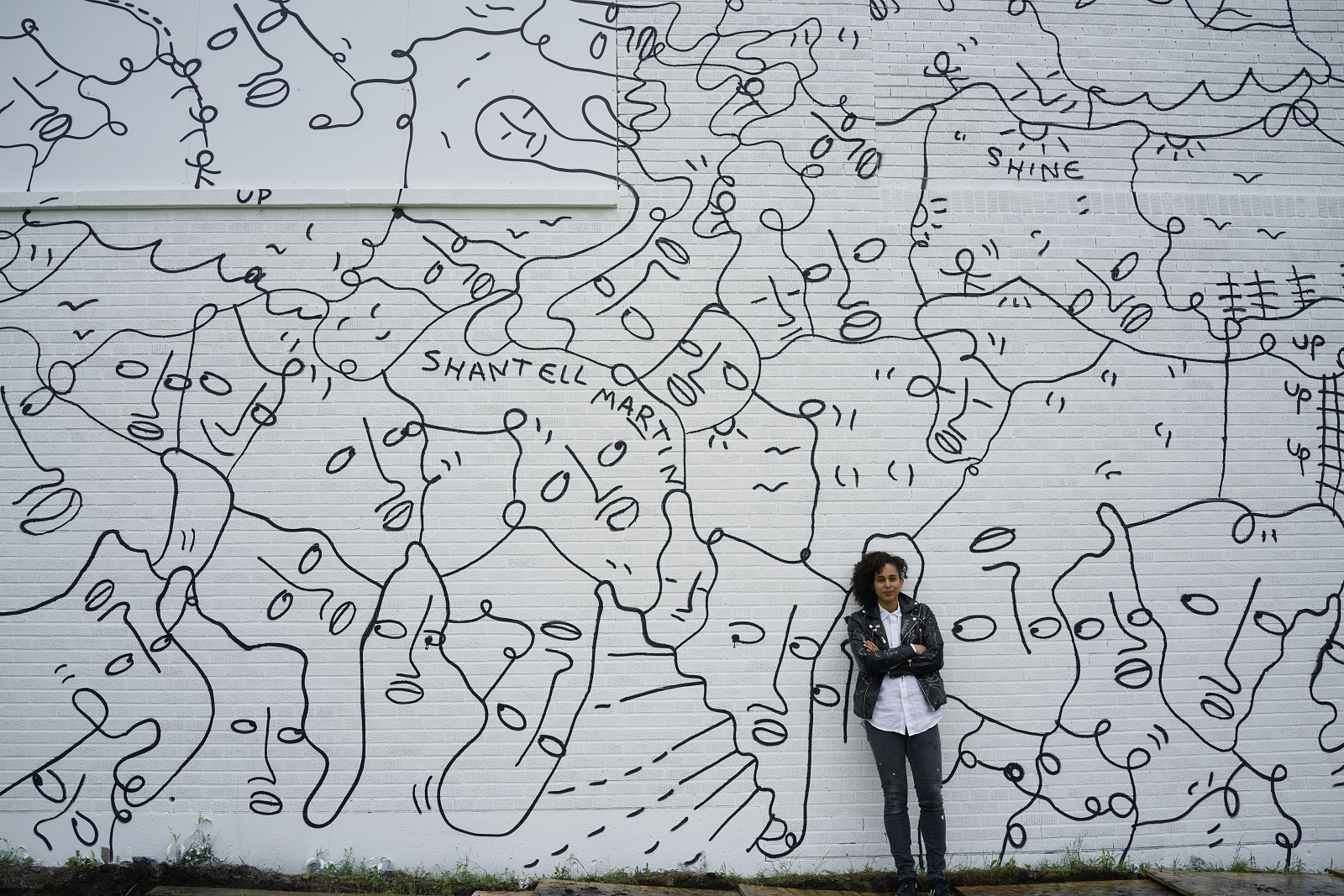 Martin, whose exhibition in the sculpture court of the Albright-Knox is on view through June 22, is known for her playful style of line-drawing. Her work, which is as improvisational as a Charlie Parker solo, features human faces, shining suns, birdlike characters and an entire shifting catalog of symbols that she has developed across her young career.

The piece, Martin's largest ever, took a grand total of six hours to complete on Saturday and Sunday. In that time, she worked with Buffalo artist Scott Bye and used several cans of spray-paint to transform the whitewashed wall into what many are seeing as a joyful reflection of a neighborhood creaking slowly back to life.

"What I do is playful. I feel like a big kid. What I do, I love it, and I enjoy it," she said. "And even if I come in in a bad mood, like 10 minutes later, I'm in a really great mood because I'm doing something I love. And I think people should do more of that."

Though Martin's work is first and foremost an exhibition of her personal style and frame of mind, she sees each piece as a reflection of the place it was made.

"People were stopping by all day, telling me about their stories, telling me about the neighborhood and how they've seen it change," Martin said on Monday. "There is something about it that feels welcoming and feels accessible, to the point where someone from across the road will walk across and introduce themselves and thank you because they feel like this is for them."

Roosevelt Townsend, 79, a retired welder who lives across the street from the mural on Delavan Avenue, gave the classic undecided answer when asked what he thought of the piece.

"It's different," he said, "but at least it puts us on the map again." 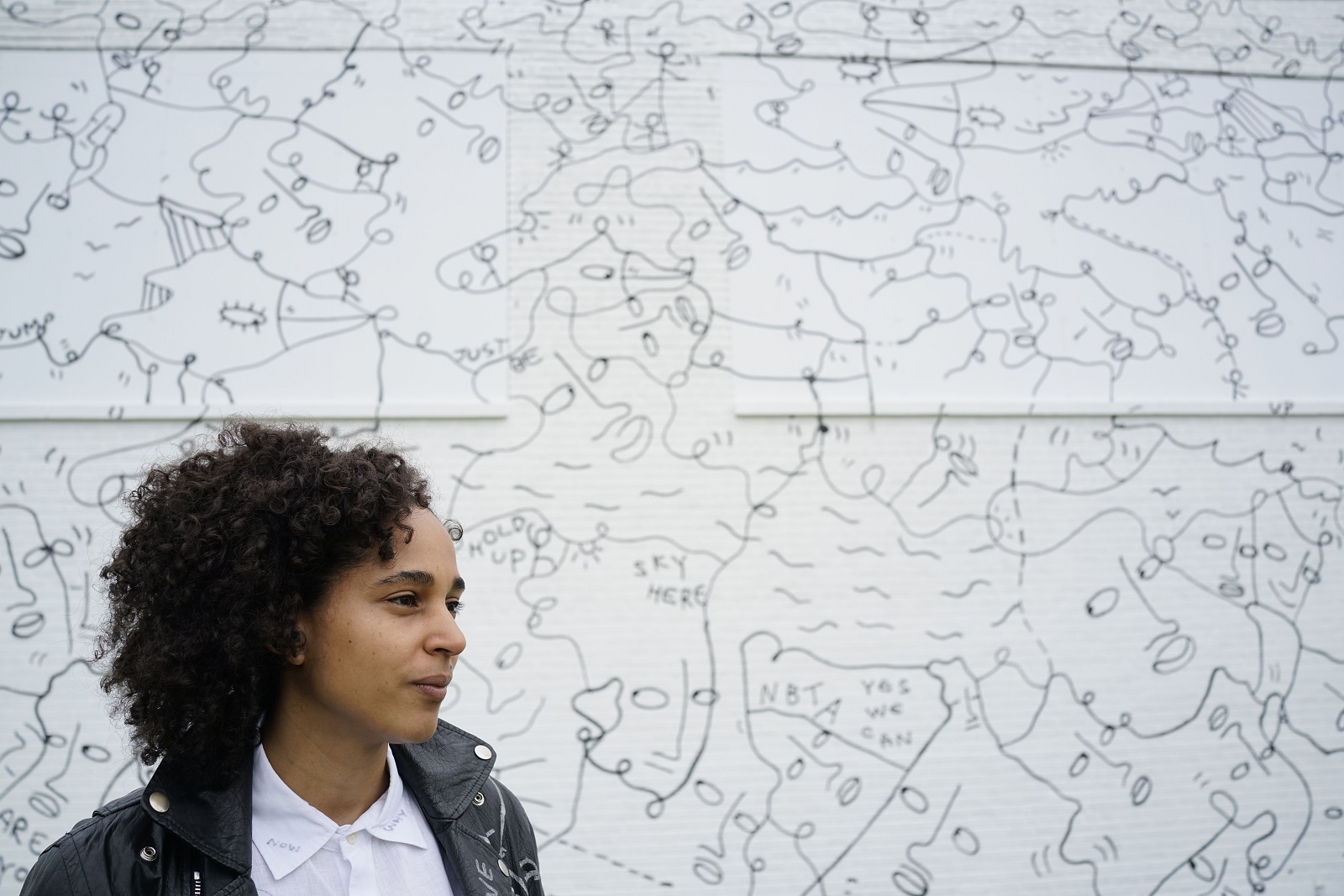 Townsend said it has caused quite a stir in the neighborhood since Martin finished it on Sunday afternoon. Like most in the neighborhood, he was quick to reminisce about the good days, when shift workers from the Houdaille plant would crowd his stretch of Delavan, patronizing long-shuttered businesses, including a car wash and a cookie shop popular with neighborhood kids.

The area, he said, has been "badly neglected," and he was excited about the plans to redevelop the corridor and potentially turn the neighborhood around.

For Martin, who has collaborated with high-profile artists like Kendrick Lamar and recently branched into fashion and music, the kind of art she creates is designed to be instantly appreciated by everyone -- no art history degree required.

"We're taking away those barriers, where art is not for you because it's something I've overthought and I've gone really deep and dark and I've put three curators between me and you," Martin said. "That's not necessary. It's a façade. A lot of it is BS. Let's just show it for what it is, and walk in and enjoy it and feel it and then leave. And then potentially be inspired to do the same when you get home, in your own way."

The mural, peppered with vaguely optimistic phrases like "dance every day," "reach," "peace" and "no one else you could be," also signals a shift for the Albright-Knox. The gallery is now reaching, with some fits and starts, into communities and neighborhoods where it has long been unknown.