It was only one small battle, but this time, man defeated nature.

For almost a month, Niagara County and state workers have battled to protect the hamlet of Olcott from being flooded by the record-high waters of Lake Ontario.

This week, their efforts passed the first test.

“The work we’ve been doing by the bluff held,” county Public Works Commissioner Garret A. Meal said Wednesday, the day after a flood warning was lifted. “That whole area would be underwater if we didn’t do something.”

Over the past couple months, waves have carried away tons of waterfront property from Lewiston and all the way east to Thirty Mile Point at the county’s eastern edge.

Olcott is the most vulnerable community in the county, as it is low lying while other areas are on bluffs. So that is where the county sent crews.

Since May 10, county and state workers reclaimed from the lake stone and sand and then built a barrier 1,000 feet long and extending 60 feet out into the lake. The barrier is three to five feet deep.

“They’re shoring it up better than it was in order to protect our homes,” said Cindy Horner, who lives in the house nearest to the barrier.

Water has entered her home a few times this year, but she said she “absolutely” feels safer than she did before the reclamation work began.

“We not only went out (into the lake), we went up a few feet,” Meal said, referring to the buildup of material on the shore.

The protective strip will be strengthened Thursday or Friday with another shipment of what County Highway Commissioner Dean E. Lapp II calls “shore armor” – precast concrete strips produced at Kistner Concrete in Lockport.

Each shipment costs about $20,000, and Lapp said the county has spent more than $200,000 on the land reclamation effort.

Except for the concrete, though, the barrier material is free. Using excavators, including two on loan or rented by the Canal Corp., crews reach underwater to scoop up stone and sand washed away by the waves and pile it back on shore.

During the first few days of the project, Lapp said, everything that was piled on shore seemed to quickly wash away.

“Six days into it, we started making progress,” Lapp said.

“It was definitely a practical solution for what we can do to protect those homes,” Meal said. “We tried using sandbags. They don’t really hold up well against the waves. They have their uses around homes.” 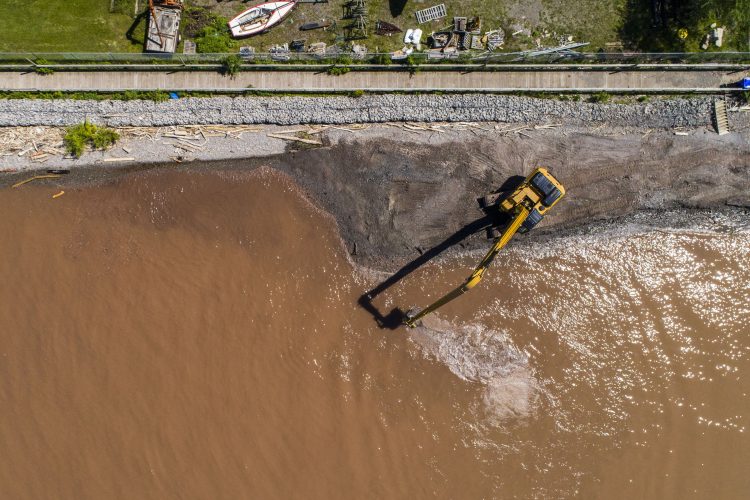 Excavators work to reinforce the beach in Olcott to repair damage from the recent flooding on Wednesday, June 7, 2017. (Derek Gee/Buffalo News)

During a recent meeting, state officials asked Meal why Niagara County was using fewer sandbags than other Lake Ontario counties.

The answer was that Niagara County wanted to reclaim the land, not merely protect it.

“As far as I know, we’re the only county that has chosen to approach it this way,” Lapp said.

Other than the concrete, no material has been trucked in, so Meal said no one is keeping track of how much has been piled up. It’s clearly substantial.

The question now is: How long will crews be able to work?

The state is expected to pull out Friday, and the county says it needs state money to continue its own work.

The county and Gov. Andrew M. Cuomo declared states of emergency for the lakefront earlier this spring. If not for that, the county’s work couldn’t have been accomplished because of state and federal regulations.

“This work has never been allowed before. It’s forbidden work, but because there’s an emergency, we have an opportunity, so let’s take the opportunity. Let’s do something good with it and turn it into a positive,” Lapp said.

Niagara County obtained a general permit for the project from the DEC. It’s one of 151 Lake Ontario work permits the DEC issued in the county since mid-April.

As long as the emergency lasts, the county can even use its equipment to shore up private property.

“If there were no state of emergency, I’d need a right of entry” permit, Lapp said.

County officials say they’re interested in extending the reclamation work across the entire 30 miles of lakefront in Niagara County.

But no one knows how much that would cost or how much material would be needed. It clearly would be an enormous project.

“We don’t have a good number, but if there’s a funding resource that wants it, we could figure one out,” said Meal, the county public works chief.

Because of the emergency declarations, county officials expect the state will reimburse the county for expenses.

Niagara County Legislator John Syracuse estimated the cost of repairing lost and damaged public and private property in the Town of Newfane, which includes Olcott, would cost $7.48 million. 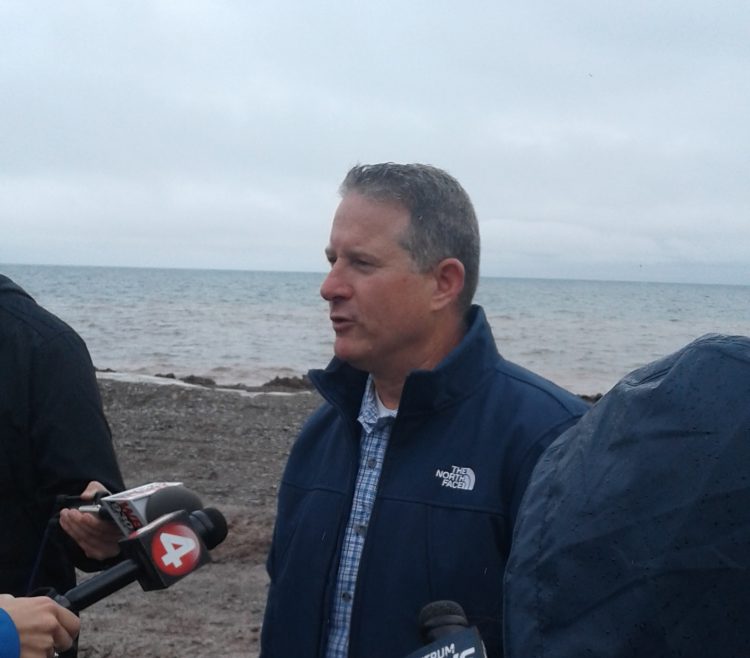 That is just a “guesstimate” done at the state’s request, Town Supervisor Timothy R. Horanburg said.

“It’s based on what I’ve seen people doing to protect their property,” Horanburg said. “I kind of took the properties I knew on the high bluff.”

“Every stretch is going to need a different treatment,” said Lapp, the county highway chief.

He said the county would have to talk with the state and the Army Corps of Engineers to figure out a plan and how to pay. It certainly would be far beyond what the county could afford.

“The best transparency they can have is paying the county to do it,” Lapp said. “Once the access is established, the homeowners would have to chip in for things they would want that are outside what we’re doing right now.”

But the building of the barrier in Olcott may end soon.

Unless the state provides more money, the Canal Corp. equipment and workers will leave Friday.

County officials say they will battle on with their own workers to restore the county-owned Krull Park Beach east of the creek. The beach will be closed all summer, because it was under at least three feet of water. 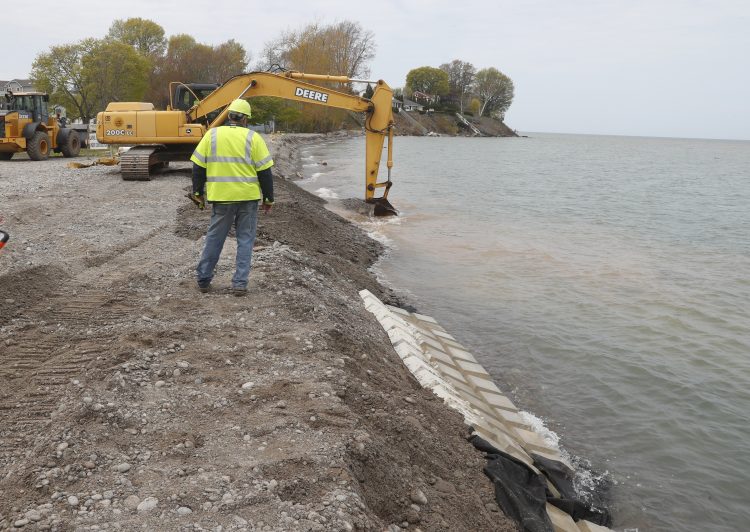 So far, about 14 feet of land has been reclaimed, and a washed-out access road to the beach has been rebuilt. However, ground water is streaming down the side of the road.

The rising water tables in Olcott have been filling sewers and producing constantly soaked lawns.

“The test for (the barrier) is going to be when it comes out of the northwest,” he said, "because it’ll be a direct wave with no protection,” Horanburg said.

Lapp was confident the barrier can stand up to any storm, although some stone may be dislodged. That’s because the county also dug a ditch, called an underbreak, in the lake bed in front of the barrier, and Lapp said that ditch weakens the waves.

Lapp said any loosened material would fall right into the ditch, to be scooped up and replaced after the waves battering the barrier subside.

“It’s still going to need maintenance, but it’s not something you’ll have to do every day. Let’s call it sustainable,” Lapp said.