When students move into University at Buffalo's new downtown medical school early next year, they'll leave behind most of the books.

The bulk of the medical school book collection will remain on South Campus in the university's Health Sciences Library with its vintage lights and traditional reading tables.

In contrast, the new home of the Jacobs School of Medicine and Biomedical Sciences will have a mostly electronic library with quiet study space and computers.

The shift to online resources like databases, journals and e-books is happening on college campuses across the country. But it is especially acute in the medical and health science fields, where research is constantly updated.

"Books take time to publish. They're not the primary resource," said Charles Lyons, UB's associate librarian for discovery and delivery. "With the rise of online materials, we've certainly tried to keep up with that. We're just trying to best meet our users' needs."

Colleges are reconfiguring their libraries to emphasize digital publications rather than stacks of books and periodicals. UB last year completed a $7.2 million renovation of its Silverman Library that, among other changes, replaced a half-million books and added 1,000 power outlets, 100 computer stations and soundproof studios. 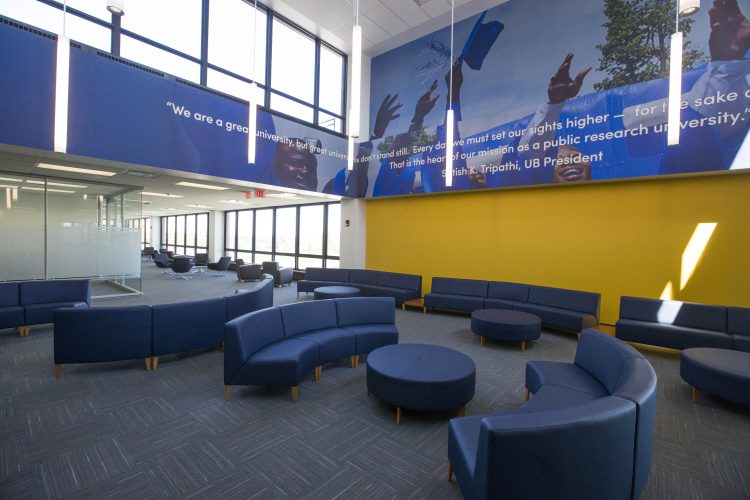 "We're pretty much seeing it across all State University of New York libraries, with library spaces being reconsidered due to the explosion of the digital realm," said Marc D. Bayer, interim director of E. H. Butler Library at SUNY Buffalo State. "Buffalo State has witnessed that firsthand, especially with traditional materials like bound periodicals."

Like other colleges, SUNY Buffalo State has joined Empire Shared Collection, housed in an annex run by University at Buffalo near its North Campus, where old periodicals are stored for future reference. That allows libraries to free up space as they make room to accommodate student advisement, writing and technological support, plus networking and collaboration.

"One of the main thrusts of what we're doing is taking prime real estate that is centrally located and highly used space, and we're moving books out of those spaces," Lyons said. "We're trying to maximize our space in better ways. They're crowded with books, but not people. We want to make room for the people and create technology-rich, silent study spaces and collaborative spaces."

The movement in college libraries is leading to a "one-stop shop" for students, said Bayer, noting plans for an academic commons within Butler Library at Buffalo State.

As libraries undergo renovation, Bayer said, many are "rethinking their space in the advent of the digital world."

"Libraries are deciding to essentially get rid of open stacks and put in place a system where if a user discovers something online, a library can get the books for them and deliver them to them," Bayer said.

The library in the new UB medical school on the Buffalo Niagara Medical Campus will feature a quiet study room, a computer learning room and several private study rooms. There will be a small book collection consisting mainly of medical textbooks, dictionaries and reference materials, but online access to materials in the library collection will be the main way of retrieving information. A librarian will be on-site to assist with information access and project planning.

The building is slated to be completed in the fall, with classes moving from UB's South Campus to the new building in January. 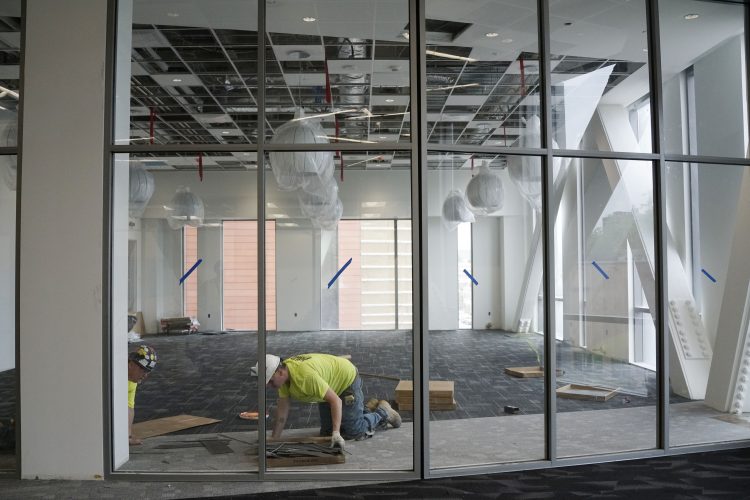 Duane Powers, a flooring installer from Heritage Flooring, installs carpet in the reading room of the library inside the new UB medical school under construction on the Buffalo Niagara Medical Campus. (Derek Gee/Buffalo News)

Most of the university's medical school books will remain in the Health Sciences Library in Abbott Hall on South Campus. Its interior decor – which includes a neat arrangement of tables, vintage lights with gold lampshades and an elegant balcony with gold railings – still looks so traditional that some on campus compare it to the school library in the fictional world of Harry Potter.

In all, UB still circulates 4 million books among its North and South campuses, including the new medical school library at the downtown medical school. The new library will be the university's eighth library.

Despite the pace of the digital world and its impact on redefined libraries, traditional books still have a stronghold, Lyons said.

"We are not really moving away from books. Librarians value and understand the important role books continue to play in teaching, learning, research and other scholarly endeavors," Lyons said. "But we are indeed re-imagining how we manage and provide access to books in response to the evolving needs of library users."

Bayer said many library users still look for traditional books, depending on the nature and type of reading they are going to do.

"Books," Bayer said, "are not going away completely."