I’ve had the Quinzi family from the Rochester area as clients for the last nine years on the Sunday of Memorial Day weekend. It has become a tradition. We’ve had trips on which we’ve caught more than 100 fish and others on which mostly big fish were caught.

This past Sunday was different. Tommy Quinzi Jr. had just finished telling me about his graduation (he is now Dr. Quinzi) when he yelled “got one” and set the hook. I heard Tom Sr. say “Holy Cow!,” and I looked at the huge form on its way into my net.

I have had three smallmouth of more than 7 pounds in my boat over the years. This one was bigger.

I began to feel the adrenaline. As I netted it, the Quinzi group started cheering. I grabbed my Rapala hand-held digital scale. As the digits stopped at 8.26 pounds, my old veteran guide hands began to shake (and continued to for another hour). It tied the state record!

It was the fish of a lifetime for both young Dr. Quinzi and his old, very happy fishing guide.

By the way, that fish was only the icing on the cake, as we also had another well over 7 pounds, five more than 6 pounds and another 11 more than 5 pounds. Our best 20 weighed well more than 100 pounds – my best ever. 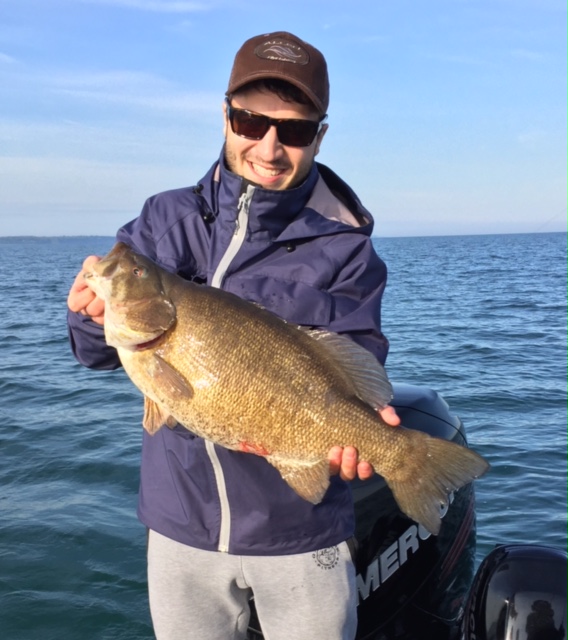 In the excitement, I forgot to get in the picture with Quinzi as he held the behemoth that I hunted for all my life. You don’t even think about getting the intricate details for this record-setting fish so your name shows up next to this beast. Instead, all of your focus is on getting her back and watching “old Moe” or “Walter” or whatever you’ve called that monster you’ve fished for all your life descend unharmed back to the bottom.

You want it to survive and maybe even be caught again. After all, I’m a big kid at heart and do this first and foremost for the love of the game.

Have an outdoors experience that would be of interest to our readers? Submissions for A Sportsman's Tale can be emailed to outdoors@buffnews.com and should not exceed 350 words. When possible, include a photo that captures the experience.