LONDON — A van driving at high speed mowed down pedestrians on London Bridge Saturday night before the occupants got out and began stabbing patrons at nearby bars and restaurants, witnesses said in an attack that police described as the latest in a string of deadly terrorist strikes to hit Britain this spring.

British police say six people were killed, and at least 20 others injured, in terrorist attacks on the London Bridge and at a nearby market. Officials said the three attackers had been shot dead by police.

London Ambulance Service tweeted a statement saying it had taken “at least 20 patients to six hospitals across London.”

The attacks set off scenes of panic in the heart of London on a cool June evening as the city’s streets were filled with people heading home from dinner or out to pubs.

London’s Metropolitan Police said the events were being treated as “terrorist incidents.” 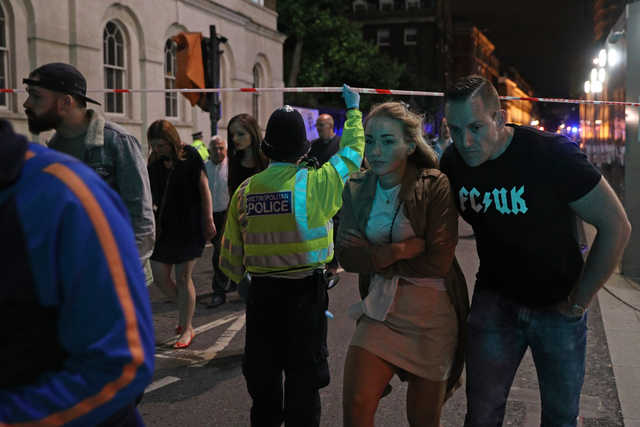 Police officers clear the area near Borough market at London Bridge on June 3, 2017, in London. Police have responded to reports of a van hitting pedestrians on London Bridge in central London. (Getty Images)

British Prime Minister Theresa May, who returned to 10 Downing Street for emergency meetings with security officials, had earlier described the incidents as “a potential act of terrorism.”

The mayor of London, Sadiq Khan, condemned the attack, saying “There is no justification whatsoever for such barbaric acts.” And Downing Street announced that May would chair a meeting of the government emergency response committee, known as Cobra, on Sunday.

Holly Jones, a BBC reporter who was on the bridge at the time of the incident, said the van was driven by a man and was “probably traveling at about 50 miles an hour.” She said that at least five people were being treated for injuries after the vehicle drove on the sidewalk and hit them.

“He swerved right round me and then hit about five or six people,” Jones said. “He hit about two people in front of me and then three behind.”

Police and ambulance workers responded rapidly, evacuating pedestrians and shutting down the London Bridge subway station. Jones later said that she saw a man being arrested by the police.

Witnesses reported that a white van was traveling fast when it mounted the sidewalk and plowed into a group of people crossing the Thames River on foot around 10:30 p.m..

Witnesses speaking to the BBC said the van collided with a guardrail, and three occupants got out. They then began attacking people on the bridge with knives before making their way to Borough Market.

London’s Metropolitan Police later confirmed an attack at Borough Market, an area packed with popular restaurants that is located just south of the bridge. Police said that armed officers were responding to the scene, that there were reports of injuries from knife attacks and that shots had been fired — though it was unclear by who.

“I heard many gunshots and I heard people running away,” said Joe Dillon, 23, who was near London Bridge when the incident occurred. “Police officers were shouting: ‘Get out of here, you need to go!’ I heard at least eight rounds of gunshots, but I’m not sure who was shooting. When I arrived a second after I had heard the screams and the shots, I saw five or six officers running toward the van.”

Cell phone video from a restaurant in the market showed people diving under tables amid the sound of breaking glass as officers rushed in and ordered patrons to stay down.

Tamara Alcolea, 24, who works as a bartender in a pub called Southwark Rooms, which is near the bridge, said the first indication that something was wrong was when she heard that someone had been stabbed. in the proximity of London Bridge.

“Then we heard gunshots and people started to hide beneath the tables,” Alcolea said. “We locked ourselves in the office. From the window, I could see an injured person being treated by emergency personnel. Then the police came in and told us to run. Everyone was panicking."

A witness, who identified himself only as Andrew, said he was in the area at a bar, heard “a massive bang” and saw a van hitting a railing.
“Next 10 seconds later, there was a guy with a big knife, I mean, a big knife,” he told LBC Radio.

Andrew jumped over a fence, got to a footpath and said there was “a dead guy lying on the floor.” He hid for a few seconds in bushes nearby, then, he said, “I ran for my life.”

Mark Roberts, who said he was on London Bridge at the time, told CNN that the van was traveling south across the bridge toward the London Bridge station.

The van was speeding and swerving, Roberts said.

“I was just lucky it swerved across the other side,” he said. “It looked to me that the van was aiming for the people.”

Roberts said that the van hit several people on the bridge and that about 10 minutes later he heard what sounded like 10 to 20 gunshots.

Police said they were responding to a third potential incident in the Vauxhall area, which is about a mile from the scene of the first two incidents. The subway station at Vauxhall was briefly closed, but later reopened. Police later clarified that the Vauxhall incident was unrelated.

Dozens of police cars sped to London Bridge, with helicopters hovering overhead. Police closed the bridge and urged the public to avoid the area.

The incident caused chaos in the heart of London in an area normally bustling on a Saturday night. Pedestrians near the bridge said they were ordered by police to run. Video footage showed people fleeing in a panic. Two hours after the incidents began, police were still widening cordons and pushing bystanders further back from the scenes.

Officials scrambled to respond to the attacks.

May, who had been out campaigning ahead of an election slated for Thursday, returned to Downing Street and was being briefed by security officials.

Jeremy Corbyn, leader of the opposition Labour Party, said on Twitter: “Brutal and shocking incidents reported in London. My thoughts are with the victims and their families. Thank you to the emergency services.”

President Trump was briefed on the incident, and immediately took to Twitter to say: “We need to be smart, vigilant and tough. We need the courts to give us back our rights. We need the Travel Ban as an extra level of safety!”

In a follow up tweet minutes later, he wrote: “Whatever the United States can do to help out in London and the U. K., we will be there - WE ARE WITH YOU. GOD BLESS!”

Saturday’s incident comes less than two weeks after 22 people were killed in a bomb blast following a Manchester concert. And it comes less than three months after a driver killed four pedestrians on another Thames crossing, Westminster Bridge. The assailant then stabbed to death a London police officer at the gates of Parliament.

After the Manchester bombing on May 22, when a suicide bomber blew himself up at the end of a concert by Ariana Grande and killed 22 and wounded dozens, the threat level in Britain was raised to critical, indicating that a terrorist attack was highly likely. But it was reduced to severe again several days later.

On March 22 there was an attack on Westminster Bridge, when Khalid Masood, 52, drove a car into pedestrians, killing four people and injuring 50, including stabbing a police officer to death, before being shot and killed near Parliament. The police treated that attack as “Islamist-related terrorism.”

After Manchester: Struggling for a sense of security amid tragedy