Summer is the time for road trips. And so we celebrate Americana. We are talking weird roadside attractions, curiosities visitors see while passing through. Things you equate with the Travel Channel, Boy Scouts, and Ripley's Believe it Or Not.

Western New York has a gem of Americana in the Lockport Cave Tour and Underground Boat Ride.

Unless you live in Lockport, you may not have heard of this tour. Out-of-towners flock to it, though, and praise it on travel sites. It's inexpensive, and surely unique in the world. The 70-minute tour, rain or shine, explores not a man-made cave but a vast tunnel blasted into solid rock in the middle of the 19th century.

Abandoned for years, it was part of a huge factory owned by inventor Birdsill Holly, an Auburn native and friend of Thomas Edison. He used Erie Canal water to power his machinery.

Oh, do not ask what is it. Let us go and make our visit. The tour's quaint headquarters are at 5 Gooding St., right by Lockport's famous locks. 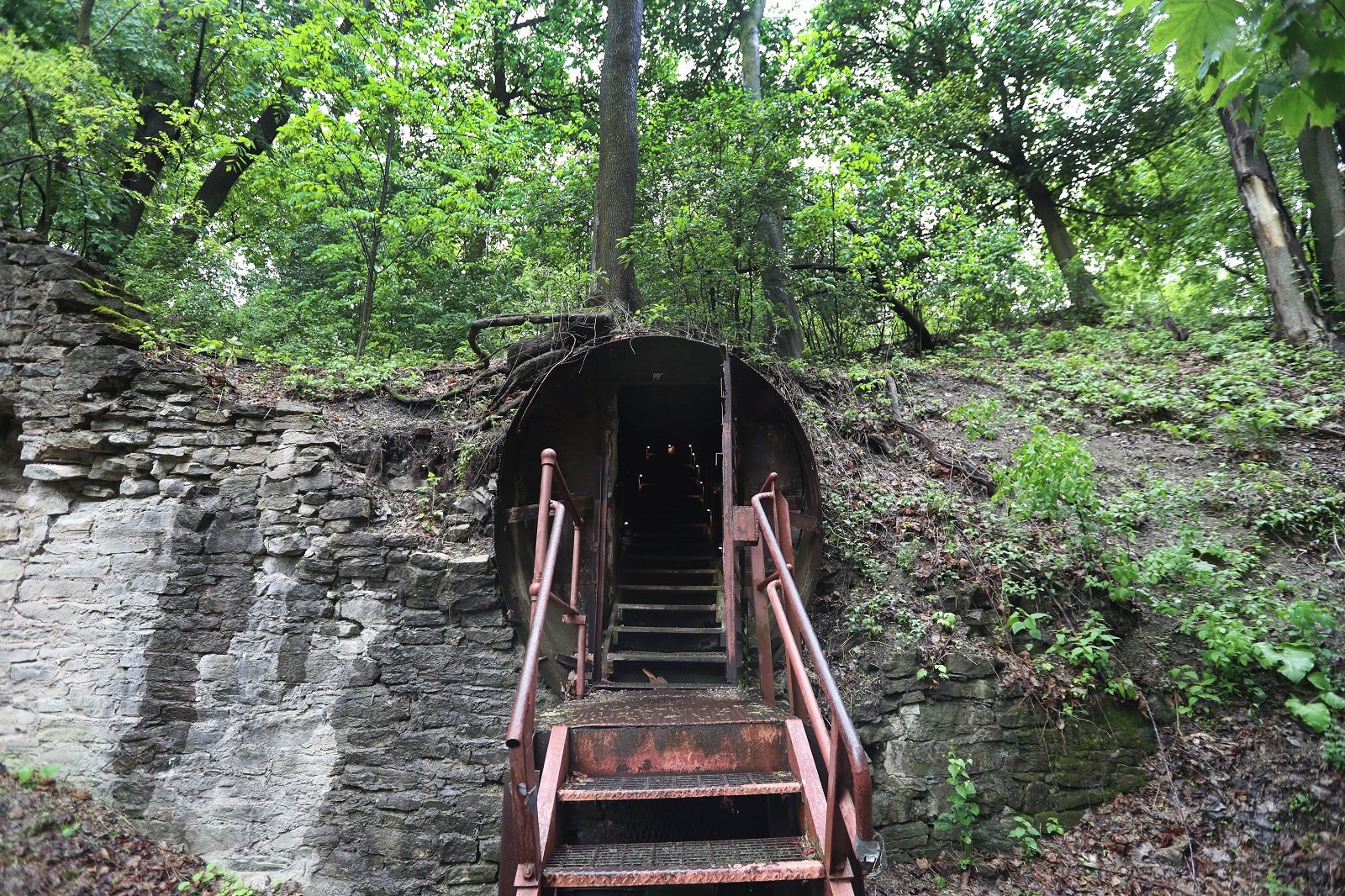 The entrance to the Lockport Cave and Underground Boat Ride. (Sharon Cantillon/Buffalo News)

Two of us from The News caught a 1 p.m. tour. It was a rainy weekday, and our only fellow tourists were a pair from Maryland, Barbara LePont and her 17-year-old son, Kyle. Kyle was mechanically inclined and, shockingly, knew who Birdsill Holly was. Imagine that! Even our irrepressible tour guide, a Niagara University theater grad named Paige Donatelli, was momentarily speechless.

It's crazy, when an outsider knows more about Western New York than you do. I brooded about that as the Maryland visitors asked knowledgeable questions about the Flight of Five, Lockport's historic locks. And then came something I had no idea existed.

Who has heard of the Lockport Upside-Down Railroad Bridge?

Paige filled us in: During the Civil War, to save on steel, someone had the idea of building railroad bridges upside-down. She said ours is one of the few upside-down bridges still operating.

Since then I have gotten on Google, and I have not been able to find one other one. Neither, apparently, has the website Buzzfeed. Because Buzzfeed named the Lockport Upside Down Railroad Bridge as the weirdest thing in New York State. Not one of the weirdest things. The weirdest thing. Up there with the Creepy Nightmare Whale in Oklahoma, Idaho's Spud Drive-In Movie Theater, and the great Jimmy Carter Peanut Statue in Georgia.

In contrast to these other attractions, our bridge is beautiful. Gawking up at it, I wondered: How had I missed this thing? 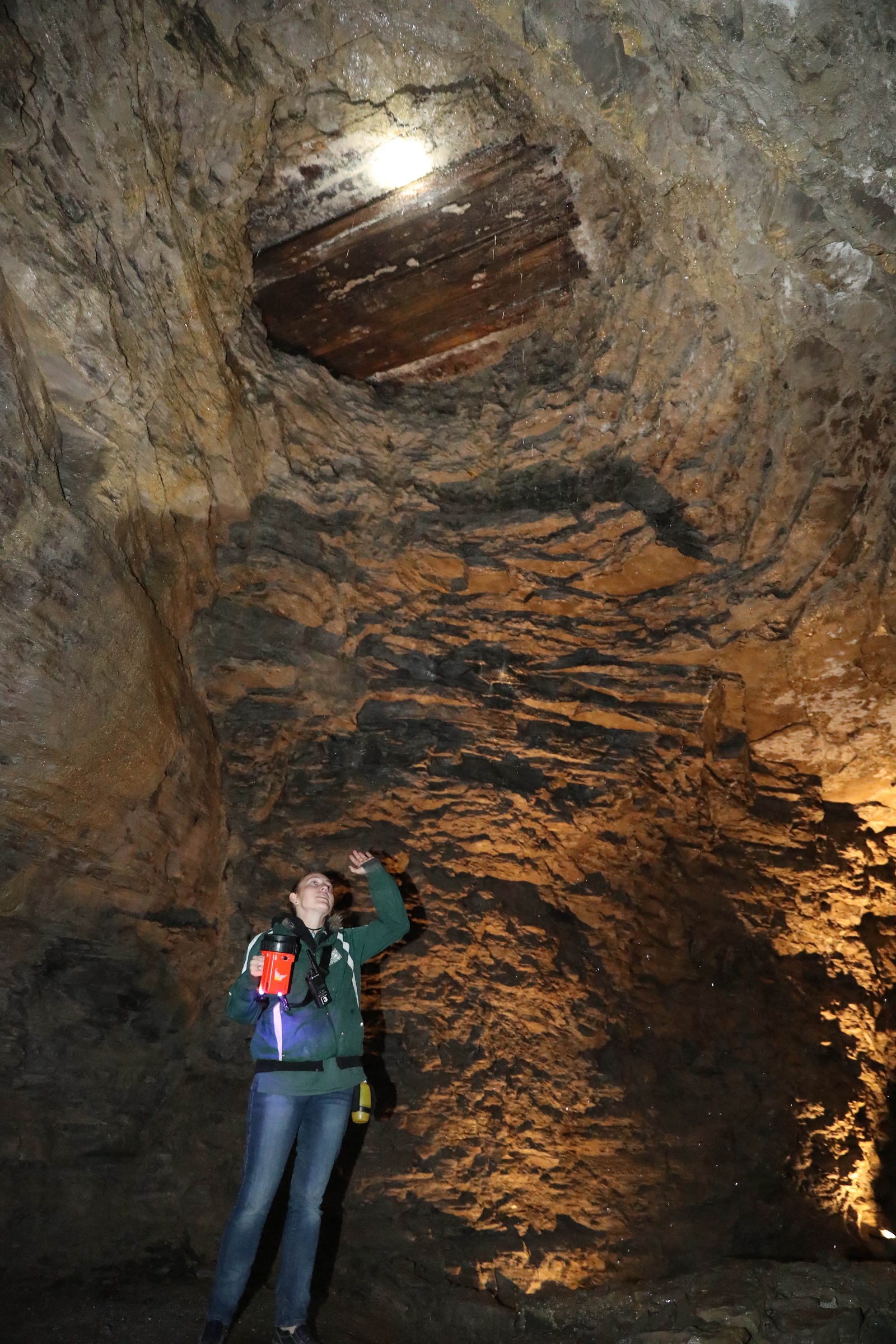 The ruins of Holly's factory, too, hide in plain sight.

"Sharknado" features a scene shot inside this "cave." Ghost hunting shows have come through with their creepy equipment. Paige, readying us for our visit, invited us to peer into a hole in the wall.

"People love it," she said. "And you never see anything." True. All you see is darkness.

You enter that darkness by walking through a huge pipe that used to be full of cascading water. It takes a bit of nerve. And it takes more nerve, once you're inside, to get past the point where your guide kills the lights for a minute, plunging you into pitch darkness.

"This is what a miner would see if he kicked over his light," Paige told us.

She then explained, to our horror and fascination, how this tunnel was hewn in the 1850s out of hard Lockport dolomite. One guy would hold a giant drill bit while another guy bashed it into the rock. Once they had a good-sized hole, boys age 8 to 12 would go in with dynamite. The kids made more money than the grown-ups, but then they had a risky job -- to light the fuse and then run like crazy. 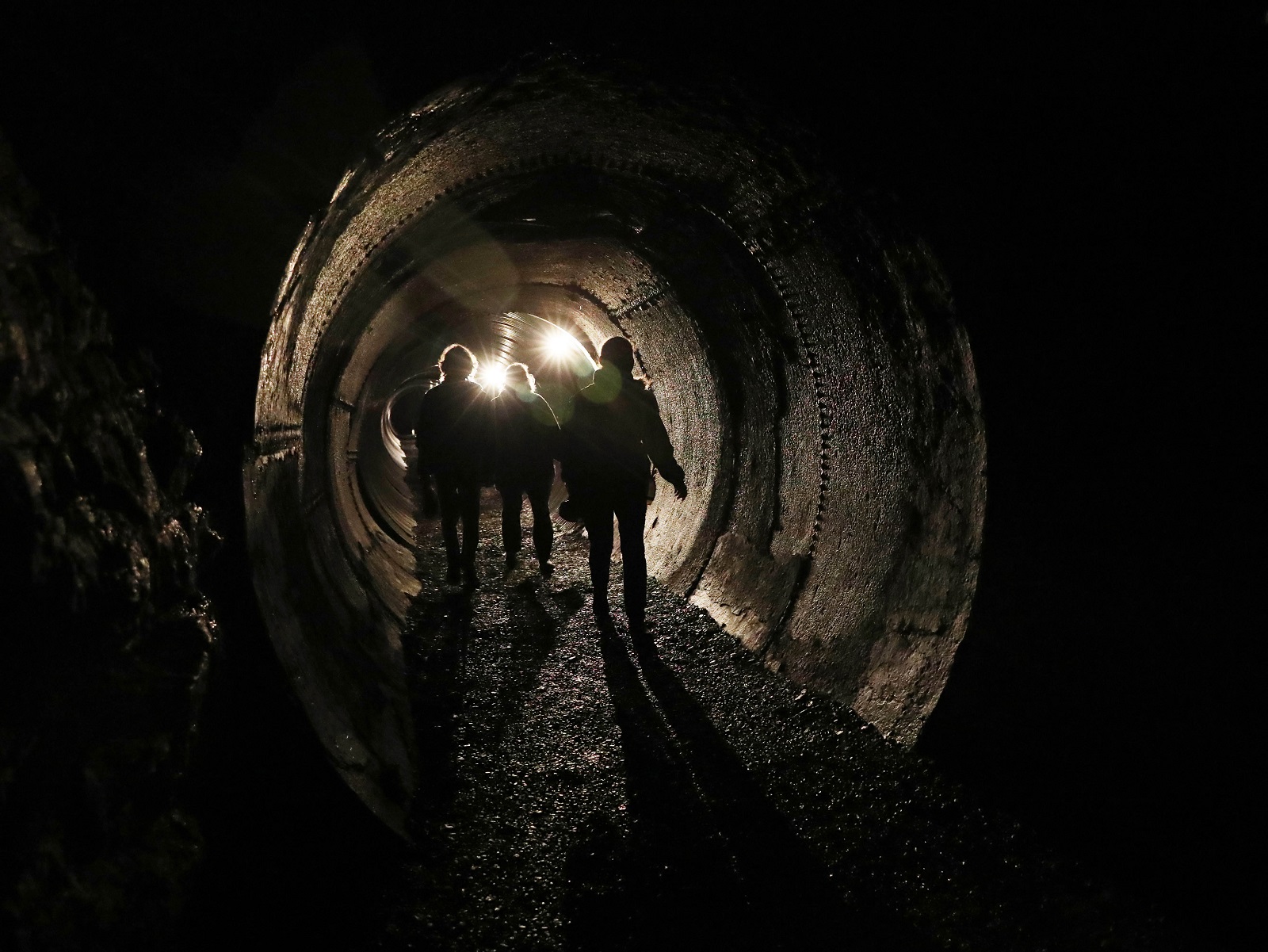 Tour guide Paige Donatelli leads a tour for Barbara LaPorte and her son Kyle, 17, of Lusby Maryland. Upon entering, they go through a 275 foot metal pipe. (Sharon Cantillon/Buffalo News)

Powder monkeys, those kids were called. You had to stop for a minute and let that all sink in, the courage involved in building Holly's dream.

The boat ride, 40 feet underground, ends the tour with a touch of romance. It's almost like the boat scene from "The Phantom of the Opera." The darkness, the flickering lights, the soft rocking of the boat, the water beneath you --

And the water above you.

"We like to call this our mini-Niagara Falls," Paige sang out. Sure enough, water came down, from drips to rivers. You are going to get wet.

But your sodden clothes can remind you the rest of the day that you were in the presence of greatness.

Holly's gravestone, in Lockport's Cold Springs Cemetery, is worn by time and reads simply, "B. Holly, 1820-1894." When you get his achievements straight, though, they are amazing. He had next to no formal education. Yet he revolutionized steam heating, coming up with a system that came into universal use. He also drew up the ingenious fire protection system of hydrants and pressurized water now used by virtually every city in America and Europe. Holly had 150 patents, second only to Edison.

To most visitors, the Lockport Cave Tour and Underground Boat Ride is a cool way to spend a hot day. To the American Society of Mechanical Engineers, it is hallowed ground, one of their national Heritage Sites.

Thomas Edison once came to Lockport and marveled at the Holly Manufacturing Co. We should, too.

Why should out-of-towners have all the fun?